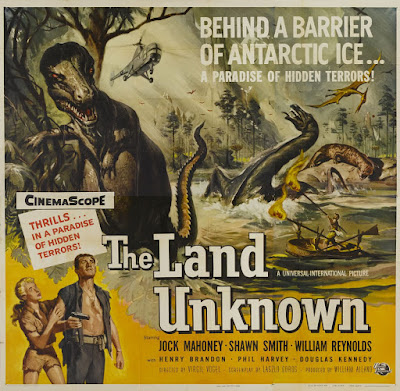 You know my favorite thing about dinosaur movies?  The rape plots, of course.  Aren't they everyone's?  Okay, let's unpack that.

In 1957, producer William Alland gave his last diktat to his skilled B-movie engineers at Universal-International.  We'll touch upon the production history in more detail at the end, but for the moment let it be sufficient to say that by the time Alland's film was actually made, his guidance amounted to little more than a demand to make a movie about dinosaurs by whatever means were available... which, it turns out, weren't much.  When it was done, The Land Unknown would prove to be Alland's final SF film for the house that Carl Laemmle built.

And that's why it's a little bit sad that it's also something of a disgrace.  The Land Unknown's screenplay comes courtesy Laszlo Gorog.  Peviously, the Hungarian exile had penned Alland's salutary race-relations allegory, The Mole People, which we contended deserves a second look.  This is not the case for his follow-up.  Along with his two co-writers, the idea for The Land Unknown must have been to give audiences a weighty castaway tale, focusing upon the clash between humanity's bestial and better natures.  Yet extruding this kind of ugly poetic realism through the filter of a cryptozoological adventure movie strikes me as kind of a terrible idea on first principles alone.  (Pop quiz: how many times is the prospect of sexual slavery raised in the Jurassic Park series?)

Even in the best case scenario—with skillful filmmaking, a nuanced script, and empathetic performers—the result of Gorog and company's endeavor probably still would have been a distressingly tawdry episode of The Twilight Zone.  And The Land Unknown is certainly not a "best case scenario."  Let's watch these horribles parade.

In 1957, the U.S. Navy has organized yet another Antarctic expedition, an even bigger follow-up to the 1940s' major efforts to chart the bottom of the world.  Leading the helicopter-borne mapping team is a military scientist, Commander Hal Roberts.  Supporting him are his helicopter pilot, Jack Carmen, and  Jack's maintenance man, Steve Miller.  Tagging along for the ride, though, is a woman, ace reporter Maggie Smith.  We presume she's here because this is a Hollywood B-movie.  (Not only do romantic subplots serve to humanize a B-movie's purely functional characters, but women also provide monster victims who won't offend our notions of masculinity when they scream and cry.)  Unfortunately—and I've already gone and spoiled why—The Land Unknown needs Maggie to come along for a more specific reason.  But, since she's already here, we might as well see her participate in an obligatory romance, too, and so she does, despite her would-be paramour's great resemblance to a stale loaf of white bread.  He first stirs Maggie's passions with this sweet nothing:  "Although I know that women consist mostly of water with a few pinches of salt and metals thrown in, you have a very unsaltlike and non-metallic effect on me."

But what he really means is that he wouldn't dissolve into a cloud of electrically-conductive anions and cations if he just happened to be submerged in her fluid.  But hey, that's getting just a little too saucy and consent-based for this picture!

On their first venture out over Antarctica, bad weather forces a landing.  But, as they descend through the impenetrable clouds, they notice firstly that the air temperature keeps rising the lower they go—and secondly that they've already dropped hundreds of feet below sea level with no end in sight.  At great length, they finally hit the ground, and when they disembark, they realize that they've discovered a jungle-like oasis, heated by volcanic activity.  Less fortuitously, they find that their rotor assembly is damaged, and the only way this ship will ever fly again is if they replace the broken part.  Worst of all—at least, seemingly worst of all—it turns out that in this land unknown, the Mesozoic Era never quite ended.  This oasis is the home to monstrously large flying pteranodons, titanic dueling iguanodons, and the all-time apex predator itself, Tyrannosaurus rex.

Plus, whatever the fuck this thing is lives here, too.

This would be enough to darken anybody's day, but in fact the very worst thing about their new environment is that they aren't as far from another human being as they think, and soon they find themselves at the mercy of Dr. Carl Hunter—the sole survivor of a previous expedition, who in ten years has become the world's greatest expert on battling dinosaurs.  He has also gone a little bit mad, and his way of saying hello is to kidnap Maggie, stealing her away to the cave he calls home—where he makes it quite clear what his plans for the woman entail.  The Navy men pursue the savage doctor, but in addition to a fight, he offers them a deal.  The wreckage of his plane has the part they need to fix the helicopter.  He'll be happy to show them the way... if they don't mind the lady staying with him.  Not to their credit, some of the Navy boys consider it.  But Roberts, the ranking officer, seems determined to save everybody—including his new rapist friend.

Before digging further into what's awful about The Land Unknown, let's speak briefly—since there's no other way to discuss it—about what it does right.  The first act is damned good 50s sci-fi boilerplate.  Even the performances work: as Hal, Jock Mahoney manages the balance between the script's virginal nerd and the manly hero he'll need to be later on, and Shirley Patterson embodies her stereotype of a decent-hearted yet mildly-acerbic girl reporter with adequacy.

Director Virgil Vogel, like Gorog, was a veteran of The Mole People, and The Land Unknown initially sees his ability to craft tense situations within an all-encompassing atmosphere of tantalizing mystery at a markedly higher ebb.  (It helps that Alland didn't force a documentary's worth of stock footage down Vogel's throat this time, too.)  Our heroes' helicopter ride into hell is, unambigiously, the single best part of the film.  The second best part comes right after they land, and begin to explore this strange volcanic valley.  This is down to Russell Gausman and Ray Jeffers' effective set decoration, deploying all the dry ice in Southern California to evoke, with a charming literalism, the mists of prehistory.  The thing is, when you make a dinosaur movie, you probably don't want people to say that the best scenes are the ones that don't have dinosaurs.

Sadly, in the case of The Land Unknown it's a little unavoidable.

What began as a self-conscious riff on the dino-spectacle of The Lost World degenerates extremely rapidly under the constraints of The Land Unknown's tight budget.  Sure, stop-motion might not look exactly real, but done right it looks like artistry, and it certainly looks like something too expensive for a William Alland movie.  Instead, outside of a pteranodon puppet that swoops in on a crane so quickly that you don't have time to properly process how shitty it is, Vogel is forced into the dark, depressing, sub-Corman depths of B-movie filmmaking to get the screenwriters' ideas across.  Desperate for imagery, no matter how shatteringly fake, Vogel pulls a play from the Burt I. Gordon handbook.  One of our first looks at the "dinosaurs" of The Land Unknown isn't even "special effects" as generally understood at all; rather, it's footage of some perfectly lovely animal abuse.  A pair of iguanas are thrown into a box halfheartedly dressed to look like a jungle, and within this box they fight.  Oh, let's give the bastards this much: they might not look anything like a fucking dinosaur, but it does look like one might've severely injured the other.  Surely do we get our money's worth when we watch things like this.

The other efforts at creating dinosaurs didn't involve as much overt evil, but that's the only compliment The Land Unknown's major monsters will ever receive.  Its rendition of a tyrannosaur is perhaps the most awkward suitmation effort seen outside of a Japanese Saturday morning tokusatsu show.  The other major beast our heroes must contend with is the plesiosaur that haunts the river separating Dr. Hunter's cave from the main part of the valley.  It's a shameful wreck of papier mache, given a queasy simulation of life by way of nearly-nonexistent articulation.  Both dinosaurs are absolutely unacceptable on any level, even an ironic one.  You might feel some twinge of satisfaction when the plesiosaur prop is set on fire—since at least this means it was destroyed.

Meanwhile, we return to our ongoing rape attempt already in progress.  It's not handled with grace—hell, it isn't even handled with macho posturing.  When Hal and his men first confront Hunter in his cave, Hal shakes his hand.  And Maggie, for her part, passes out no fewer than three times at the prospect of various forms of violence, sexual and otherwise.  The closest she gets to "agency" is to consider whether to take Hunter up on his offer for the sake of the three men, and as a result The Land Unknown almost stumbles upon an interesting conflict, if an unsuitably dour one.  (It rapidly dispenses with the notion, naturally.)

We're clearly meant to feel, as Hal does, some sympathy for Hunter's plight.  Yet we're not even left with the very faintest point of identification—the idea that he's gone half-insane with lust after ten years trying not to get eaten by a plesiosaur.  Instead, with a premeditation befitting his Ph.D., he's clearly thought long and hard about the matter, and pursued it anyway.  Thus, though the film thinks it's a redemption story, it's rather more about an understanding between men that, sure, rape will happen sometimes, forget about it, let's go on a helicopter ride.  In the end, Maggie—clearly unworried by her experiences—cozies right back up to Hal, talking marriage.

It's a fucking crock: the moment they descend into the valley, The Land Unknown goes to hell, and then gets even worse.  You want to know the damned shame of it though?  Originally, The Land Unknown was meant to be directed by Jack freaking Arnold, the 1950s' greatest director of science fiction.  Vogel unsuccessfully attempts to copy Arnold's humanism here, but if anyone could have saved The Land Unknown, it had to have been the man himself.  (The Creature From the Black Lagoon, after all, is essentially a feature-length rape attempt already—and that movie's amazing.)  Tragically, when the estimates for Arnold's Technicolor dino-rama came in, Universal demurred at the cost.  So Arnold walked over to the next soundstage and directed William Alland's other last Universal picture, The Lady Takes a Flier—a melodrama, but with a much flusher budget.

Alland left The Land Unknown in Vogel's hands then, and Vogel made the movie he was obligated to make.  Maybe at that point, there wasn't much that anybody could have done, anyway.

That which is indistinguishable from magic:
The morality of the past, in the future!:
Sensawunda:
Posted by Hunter Allen at 4:43 PM