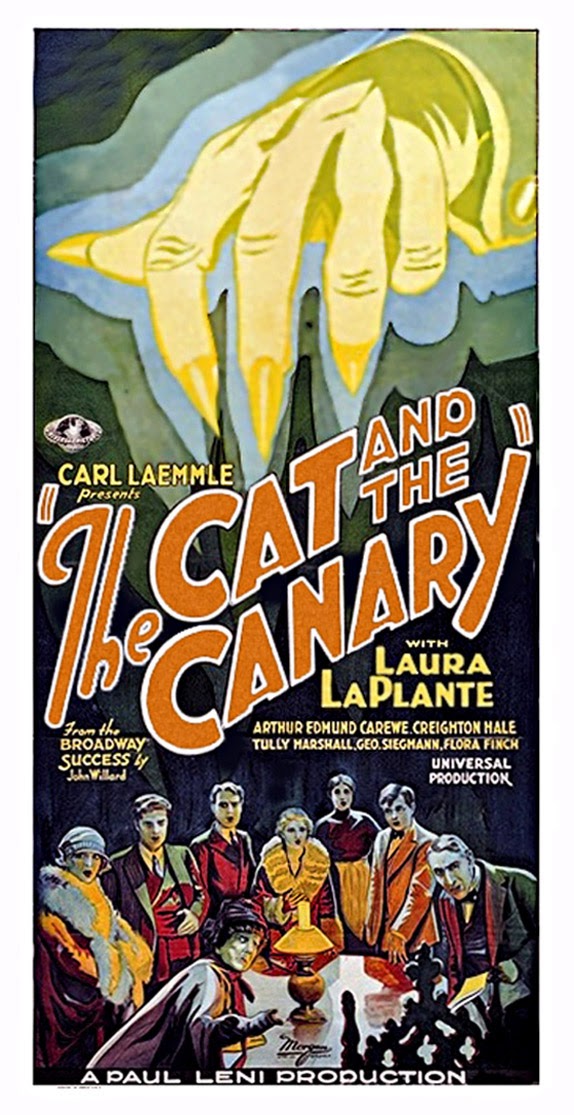 THE CAT AND THE CANARY

Garbage in, garbage out. 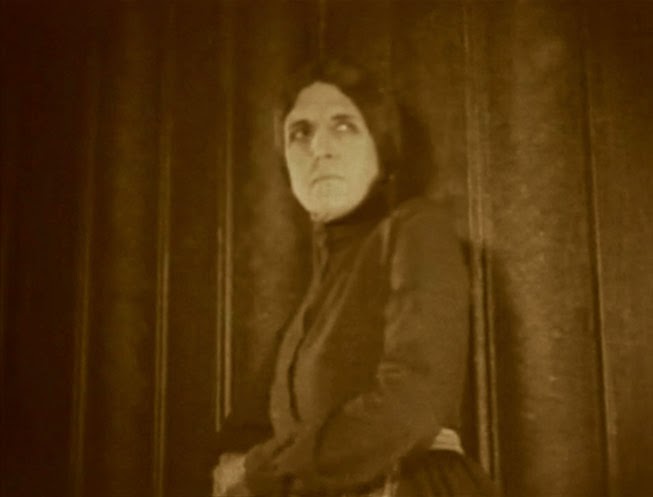 Well, on the plus side, "Mammy Pleasant" isn't a racist stereotype, which is what you'd fear with an appellation like that.  She's another kind of stereotype: the hard-bitten, mean-spirited, vaguely-sinister maid.  She has little to nothing to do with the actual plot.

That plot goes like this: nearing the end, the eccentric but certainly not legally insane Cyrus West, in a final gesture of hatred toward the family that had spent so many years tormenting him for a taste of his riches, drafted a will that could not be read until twenty years after his death.  Those twenty years come due at midnight tonight, and so—despite a burglary of the safe that contained the will, and the certainty that someone involved has read its secret condition—the surviving twigs that sprouted off the withering West family tree have descended upon the background painting standing in for Cyrus' mansion to hear the reading of his testament.  These number a pair of seemingly normal young men, Harry and Charles; an obviously abnormal but seemingly harmless young man, Paul; an old biddy, Susan; a younger, flappier woman, Cecily; and our obvious protagonist, Annabelle West, who would otherwise be indistinguishible from Cecily except she has straighter and shorter hair.  She is, however, remarked to be the image of Cyrus. 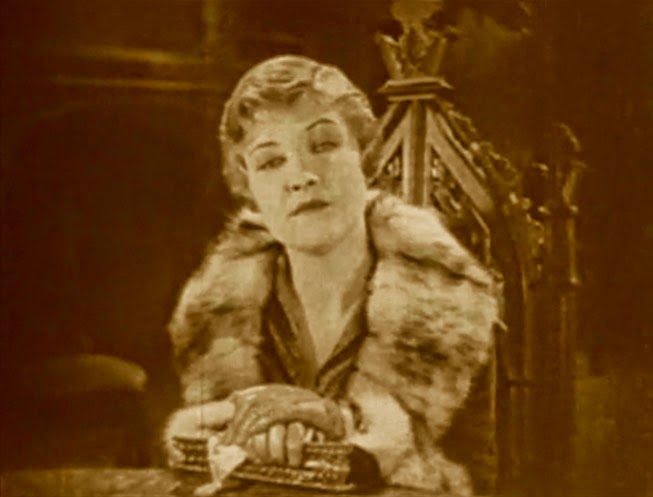 I guess this means Cyrus was a gorgeous blonde. 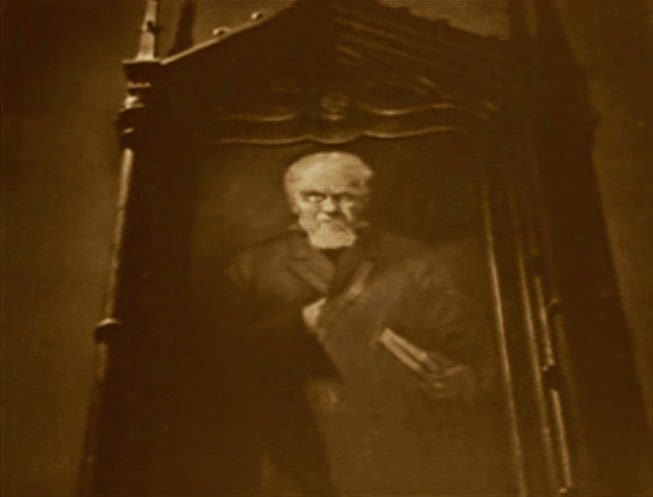 The terms of the will are as follows: the entire fortune goes to Cyrus' most distant relation who still bears the surname "West."  Annabelle wins.  That movie was short, wasn't it?

Oh, but wait, there's one thing more.  I mentioned a secret condition, didn't I?  The recipient of Cyrus' bounty must be adjudged sane by a doctor, so that his heiress will avoid a life-draining struggle against greedy relatives out to prove that she isn't.  So guess what happens now.  Come on.  Just guess.

Probably anything you guessed was better; the premise is like a screenplay generator someone programmed for a computer, and most of the scripts such a thing would spit out would probably wind up at least watchably decent, without human intervention at all.  But the output in The Cat and the Canary would be schematic, even for a film written by a computer.  Worse, it is so broken, within its scheme, that nothing so weak as mere vintage could redeem it, and it was surely just as bad in 1927 as it is now.

I don't think it's even an exaggeration when I say that Canary could have been plausibly output by a machine today, but, of course, back in the 1920s it took a hundred-man team of trained operators working day and night upon a bank of primitive difference engines to render a screenplay like this, and still it wasn't enough to catch the errors.  Just to take the most egregious example...

As you've surely determined, someone is trying to convince the world that Annabelle is crazy; they do this by seizing a man in front of her and murdering him, but this is a man that everyone else in the house has seen and knows intimately, who was not only demonstrably there a moment earlier but is also demonstrably missing now.  That a couple of the characters actually wonder for a moment if she is crazy, even taking their greed into account, is perhaps worse than the messy efforts of her tormentor; but the truly worst is when Laura La Plante, rather than simply getting angry and frustrated and snappish, as a person would do, prematurely female-ejaculates her persecution complex upon the screen in a horrid display of an actor giving a singularly terrible performance under abysmally bad direction.  Canary's mystery-thriller plot is thus rendered, and in its very first moments, so inept—so beyond inept—that you can see why I find it difficult to attribute any direct human agency to its story at all, even though it was evidently a successful stage play.

However, the primtive algorithm used to generate the script also included instructions on symbolism, and Paul Leni—definitely a human, though what kind I don't yet prefer to say—certainly obliged his mechanical master.  Leni offers us bracingly obvious imagery that is nevertheless sometimes effective... albeit outright offensive when seen in context with the intertitles that spell out what the already patent visual metaphors represent. 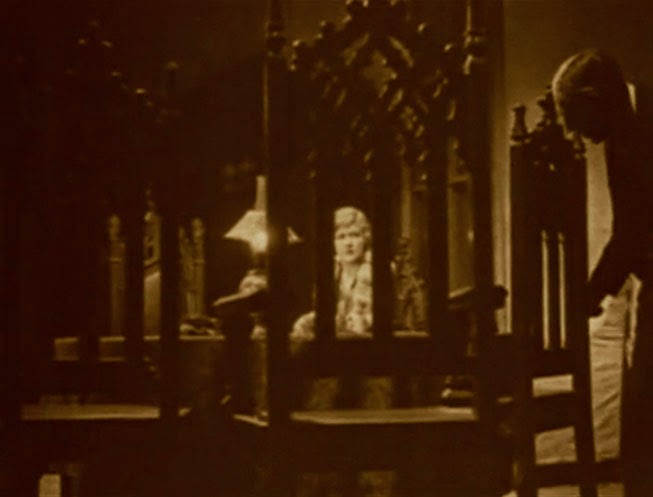 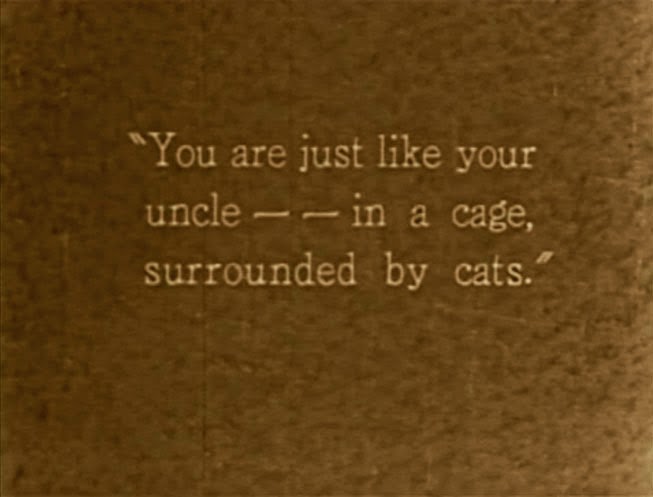 The Cat and the Canary: the silent movie a fucking blind person could comprehend—and still be displeased by.

Indeed, if I took a letter grade off for every time the words "cat" or "canary" were used to describe the situation, then this would be, by simple math, the worst movie ever made.  It's not quite that bad, but it is nowhere close to not being bad.

Canary is also a comedy; perhaps it is predominately a comedy.  This permits the tone to alternate wildly, between that of a dreadfully boring old dark house "mystery" and that of a leadenly unfunny slapstick "farce."  The laughs, such as they are, are primarily delivered by Paul, the male lead (I guess).  He is portrayed by a failed clone of Harold Lloyd, in what I reckon to be a nearly-actionable appropriation of Mr. Lloyd's intellectual property, namely the Glasses Character who delighted audiences and has delighted me in such films as Safety Last!, The Freshman, and more. 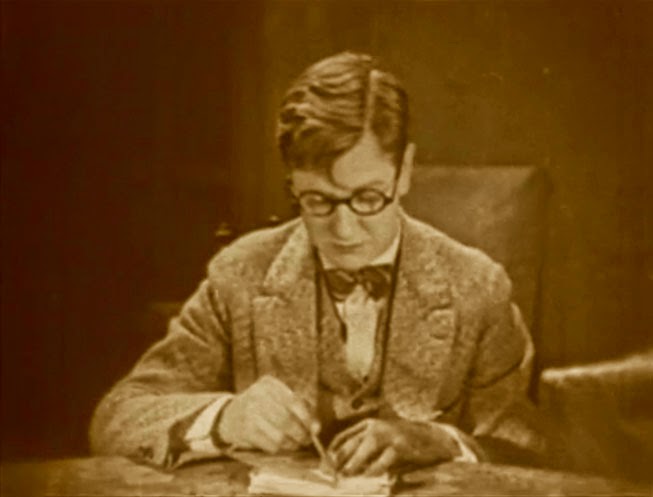 Harold Lloyd would have climbed this house, poser.

Paul also has a crush on Annabelle, which is more understandable if you don't continually recall that the reason they're all here is because they're all related.  Adding to this questionably sexy ambiance is a scene that finds him hiding under his other cousin's bed. 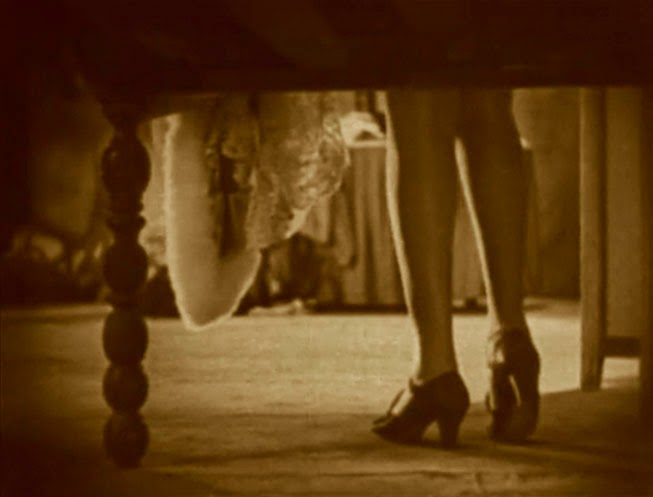 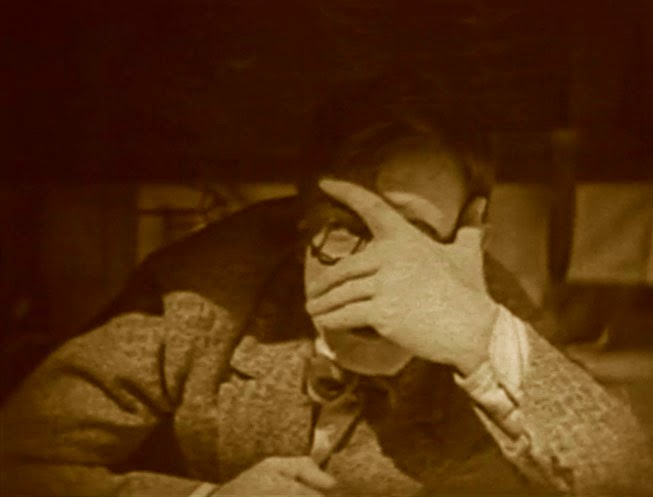 I'm being perhaps slightly unfair, insofar as this scene does, in fact, feature the one decent visual joke in the whole picture (when Susan discovers him first, she sees him in red-tint, with the reflection of keylights giving his eyes the cast of a demon's; but when Cecily looks next, it's just Hale, the embarrassed loser).  But even deeply uninspired filmmakers have turned this very same set-up into an occasion for tense thrills and utter joy—or at least a sustained smile.  Leni looks at this scene like a young boy who'd never seen ice cream would look at a delicious chocolate cone, permitting it to messily melt and fall irrevocably into the dirt, while he cried tears of loss and confusion.  (If I did not make it plain, it's really not a very funny movie, for all that it is trying, and it is trying very hard.)

I might not have mentioned that there's also an escaped lunatic, for added intrigue (a "miniscule amount" added to "zero" equals "some"), as well as the cop trying to catch him. But this just throws another artichoke into this already-unpalatable salad, more human objects to be maneuvered about the plot as are needed, or as are not needed, as the case in fact is, for this film is not needed, by anyone.  There is, of course, a barely-satisfying resolution to the mystery, and it is no compliment to say that the writers of Scooby Doo took the basic elements of Canary and reconstituted them with a sense of comparative sophistication.

The array of better options to Canary is legion.  For a movie about an archetypically-scowling maid who matters, try Rebecca; for a movie that takes the crimes committed in an old dark house seriously and has atmosphere and acting to spare, try The Fall of the House of Usher; for a movie involving a comedically-bent mystery in an old dark house that at least entertains with its contortions, try The House on Haunted Hill; for a movie that explores the concept of a woman made to believe she might be insane for more than ten lousy minutes, try Gaslight (either one!); finally, for a movie whose happy ending is predicated on incestuous cohabitation, try... well, try Oldboy, I guess.  I think that ending is supposed to be happy.

Whatever you do, avoid this, except for the most scholarly of film-historical purposes—for as a movie qua movie, it is a total hash. 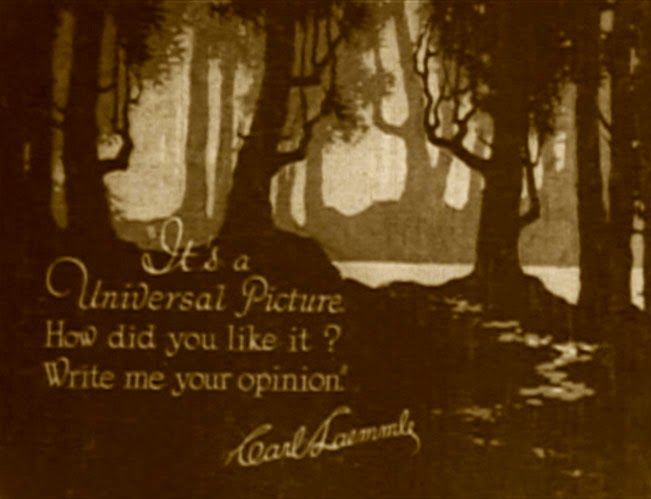 Canary is considered horror partly because it has some imagery that someone, somewhere, might have once found scary, but mostly its genre reputation rests on the facts that 1)it was produced by Universal and 2)the rules of what defined a "horror" film were unwritten back in 1927.  Even so, these are hardly excuses.  The Phantom of the Opera and Nosferatu and The Cabinet of Dr. Caligari are easily recognized as horror films today.  You see Canary classed with them, and your curiosity is piqued.  Thus you watch the world's shittiest episode of Frasier, and wonder how anyone could have ever slotted it into the genre, and if their rationale would stand up to five seconds' concentrated thought.  Now that I have watched it, I know that there was no call whatsoever for me to include a catastrophe like Canary in this journey through Universal Horror—except, perhaps, to preface the next two films in this series, which I know good and well aren't horror either, but, like a computer caught in a dire loop, now that I've done this, I cannot avoid that.

This moves us seamlessly into discussing Canary's place in film history generally: fraudulently peddled as early horror, it has also and equally fraudulently been deigned a minor classic.  (And not just by nerds from the future, but by contemporaries: the more I read Mordaunt Hall, he formerly of the New York Times, currently of the afterlife, and forever of the name that sounds made up, the more I think he might have been an actual insane person, and also that he was a racist.)  As previously related, but bearing repeated, Canary is no damned classic, minor or otherwise.  But I know why people still bring it up, even still recommend it: it's because of its director, Paul Leni, a man whom I am coming to regard as the single most overrated person to have ever worked in film.  I've had cause to note the void of quality that is Waxworks, another film sometimes incorrectly filed under horror, and though it must be said it's more visually interesting than Canary (and not strangled by its intertitles), its narrative manages to be even more of a complete waste of time.  I've never seen a good Leni film at all.

I have seen a mediocre Leni film—and we'll all see if my deepening disgust at Leni's work and enduring reputation is justified next time on Monsters Mashed, when we determine if The Man Who Laughs can possibly improve with a forced second viewing.  Following that, we'll check out The Last Warning.  Also another murder mystery.  Also by Paul Leni.  Gosh, am I excited or what.