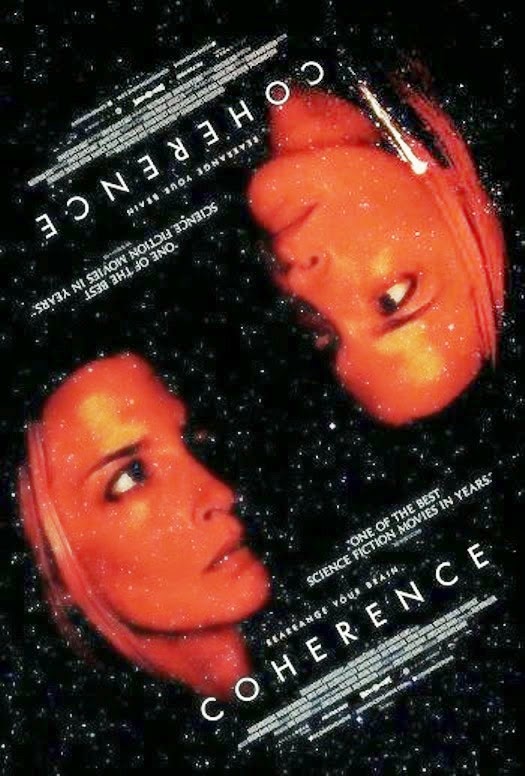 It's never a compliment to say that your movie would be better off as a short story.  It's even worse when one must add that the short story wouldn't be good, either.  But at least a short story has never made me want to figuratively (and literally) throw up.

You see, the first thing you'll notice about Coherence—and the thing you'll never stop noticing—is that it is some kind of awful Dogme pastiche.  In other words, it is videographed via some of the most uniformly terrible handheld camerawork I've ever seen outside of a found-footage film.  In fact, most found-footage films are still more professional and less offensive.  But, anyway, Coherence shares the hallmarks of that form: vomit-inducing shakycam; an upsetting reliance on the most horrifyingly extreme close-ups held forever; and near-arbitrary composition, combined with a lack of focal discipline that keeps grotesque blobs in the foreground while something happens in the middle distance.  It should be pointed out that 90% of Coherence takes place in one or two rooms of an expansive upper-middle-class home, and that 90% of it is people talking at tables.  (The other 10% occurs in the driveway.)  So obviously handheld video was the only way this Raid-like ultra-action could have possibly been captured.

Equally obviously, it needs to be in 2.35:1.  This is a dark day, my friends, that I am forced to admit that Scope is not the best possible aspect ratio for everything.

Coherence doesn't believe it needs luxuries like "camerawork," because it is a no-budget sci-fi movie, arrogant enough to also suppose that it is a Film of Ideas.  The readiest comparison in the small subgenre of science fiction chamber drama is Jerome Bixby and Richard Schenkman's TV-inflected masterpiece, The Man From Earth.  Like Coherence, nearly the whole thing happens in somebody's living room.  Unlike Coherence, you can stand to look at it.  No one is ever going to describe From Earth as a work of formal beauty, but it is entirely handsome in its bland competence, content to simply stay out of the way of its conversations.  This is the most basic filmmaking task, and it is one that Coherence entirely fails to manage.  That From Earth's conversations are not routinely stupid and frustrating is a huge advantage over Coherence as well—but, all in due time.

If I must be nice to Coherence at all, at least it has a nice warm color palette and rather good editing, particularly some ultra-hard cuts to stretches of black in many of its scene-to-scene transitions.

Pictured: Coherence's single prettiest frame.  (Guess what?  I'm not in the business of being nice to Coherence.)

Of course, the very best thing about Coherence is that it's only 89 minutes long.  These very small favors are the only things saving Coherence from being consigned to the stinking garbage heap of anti-film history.

To put a name to this shame, the movie was shot by Nic Sadler, but I doubt it was his fault alone.  It's perfectly clear that this was the aesthetic that James Ward Byrkit desired for his shitty SF movie.  And, yes, I did look it up to be sure: he's not even Danish.  Therefore, he has no excuse.

On the night a comet passes over Earth, eight friends have met at a tedious dinner party, which goes the way all of them always seem to, veering into recrimination and a lot of shrill, overlapping dialogue.  But this one goes even worse than most once the lights go out in the house, and all over the neighborhood, except for one house that can be seen a few minutes' walking distance away.  When two of our cast venture to see if they can use the phone—for their cellphones have been rendered inoperative as well—one of them receives such a shock that it takes something like twenty minutes of shrieking to get him to tell everybody else what their movie is about.  What he saw, of course, was them.  Or, more properly, alternate-universe duplicates of them.

The upshot is that 2014 has shaped up to be just a terrible year for the doppelganger movie.

Those (few) of you who recall 2013's best entry into that subgenre will also immediately come to the conclusion that Coherence is just reheated +1.  This is not quite so.  Coherence is the first act of +1—actually, it's more like the bare premise of +1, explained and re-explained for a solid hour by morons.  But instead of anything like +1's slow burn and its characters' varied and intelligent reactions to their arcane circumstance, Coherence jumps instantaneously to a fever-pitch.  Much of the remainder of the film is occupied with deafening declamations that the duplicates are going to come over and murder them to take over their lives, or something to that stupid effect.  Much of the rest is committed to the characters misunderstanding the premise, due to their poor science educations.  Attempts to evoke danger are made by lines suggesting that they're in a wave function that hasn't collapsed yet (the fact that they are conscious and alive suggests otherwise).  And, naturally, attempts are made to get drama out of the possibility that they might get mixed-up and find themselves in the wrong universe's house (whoopty-shit).

(And I'd never even think to mention it if I enjoyed the movie, but does anyone really think a comet explains this piffle?)

Eventually, something like a plot develops around its protagonist, Em.  This recapitulates the main plot of +1, except without much surprise, or suspense, or the making of sense.  +1, remember, was about the insane efforts one character went to so he could fix a key moment that went wrong; Coherence is about a character to whom little of consequence actually occurred, groping around for a universe where the same underlying interpersonal issues obviously still persist.  And, yet, the differences are really only in tone.  After all, Coherence features very nearly the exact same ending.  It's almost fascinating how different in quality two versions of the same idea can be.

However, it is the only part of the movie that manages to engage on virtually any level at all, offering 15 or maybe even 20 minutes where the premise is being explored rather than simply explicated, and something of actual interest is happening.  I even kind of love the last shot.  But, needless to say at this point, a merely solid last 20 minutes is not even close to enough to make this stream of shit worth watching, even if it was streamed for no extra charge on Amazon Prime.  Certainly, the smattering of (rare) good scenes in the previous 69 does nothing to redeem Coherence, either.

And I don't even want to get into how it was actually welcomed by the critical community.  I mean, are you fucking with me?  The answer is clearly "yes, the world is fucking with me."  According to Coherence, I should freak out immediately.