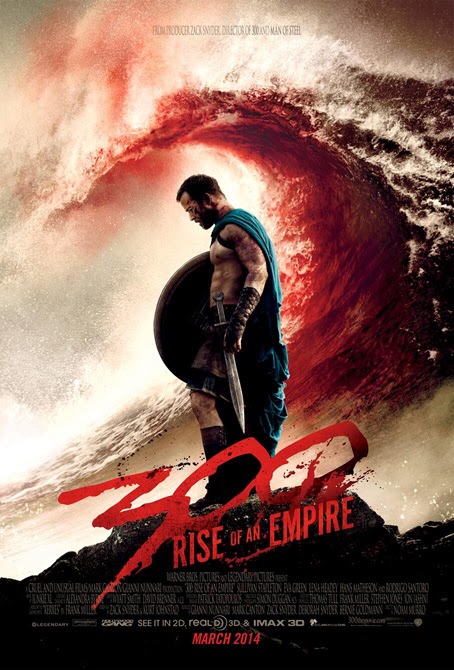 There are, by now, approximately one billion reviews of 300: Rise of an Empire that begin with the caveat that the author did not like 300.  Thanks to the Spartan slave state, we were not conquered by freedom-hating Iranians 2500 years ago; as a result, having terribly wrong opinions is still legal.  For now.

"Great" may be pushing it further than I want to go, but at the time (that seems so long ago, because it was), I simply could not get enough of Leonidas kicking motherfuckers into pits and the Persian Empire being vilified for no good Goddamned reason.  Let us settle upon the appellation "justifiably beloved," for 300 was, if nothing else, immensely fun.

So perhaps the most insidious thing about its sequel is that it includes some twenty minutes' worth of Sparta-related material that you'll wish had been cut for a whole host of reasons, foremost that it is direly uninteresting, but not least because it actively undermines the affection you may once have had for the franchise.  Yes, Rise of an Empire commits the worst sin that any sequel can: it makes the original worse.

And it embraces the other great evil associated with sequels, too, for it is the same movie, but with every single moment of enjoyment removed.

But it could at least have looked as good as its predecessor.

Zack Snyder's 300 proper was visually innovative, and, to my eye, rather gorgeous; its legacy cast a bucket of brown goop over the genre that it is still wallowing in, but who blames Star Wars for Space Mutiny?  It took its source material's flat, lazy spare, oh-so Frank Miller aesthetic and made it cinematically unique and, in its own way, grand.  In one respect only does Rise of an Empire depart substantially from its predecessor in any wise other than quality: Empire has been rendered in our old friend blue and gray, and its more open scope (and baffling 3D presentation) ruins the stagebound quaintness which so defined the original.  So, in this regard, this franchise's rip-off of itself is totally different—hideous being very different than (however brutally) beautiful.

Between this and Man of Steel, I am beginning to believe Snyder (producing this one) has taken a very wrong turn at Albuquerque.  He needs, quite desperately in fact, to trace his path back to Dawn of the Dead, the first 300, Watchmen, that owl movie, and even Sucker Punch, so he might regain his brilliance, or at least his ability to appreciate some other colors.  A connoisseur of the limited palette he may be, but he was never this monochromatic.

(Or, perhaps, he needs to return to slavishly replicating comics again; and there's no shame in that, for he was amazingly good at that.)

It is slimly possible, possible enough to pin my hopes for the future upon it, that Snyder did not oversee the look of Empire to the extent others have assumed.  Rather, this is pure Noam Murro—a sophomore filmmaker with no action experience, doing his pitiable, miserable best. In this more optimistic conception of things, Man of Steel was Chris Nolan putting his blue-gray boot upon Snyder's throat, and Empire is Snyder breaking that cycle of violence between producer and director, albeit to most unfortunate results.

But, other than this shift in palette, and excepting that Empire takes the Athenians as its protagonists, it tells almost exactly the same story with largely the same structure, substituting "a small force of ships" for a "small force of men."  That this does not, logistically, come close to working should be readily apparent from the utterance of those words, but no one involved seemed to think so; you will wonder how the Greek and Persian commanders are communicating their orders to their respective fleets, especially when they bounce around from ship to enemy ship and gut their foes like fish, but Murro did not.  Basically, in the dim, poorly-edited twilight that comprises the film, the best chance in decades to bring the naval combat of antiquity to life is bitterly wasted.  (There is also a part where an ancient ship somehow explodes as if packed with gunpowder, if not a primitive Iranian nuclear device.  Well.  At least it is orange.)

Empire, clearly, is a more facile work of history than even 300—early on, we learn that Themistocles, the person-shaped prop with the most lines in this movie, shot the Persian shah Darius with a fatal arrow during the Battle of Marathon ten years before.  My jaw hung slack for many minutes (it is depicted in slow motion).

So we see that, as soon as it's able, which is in the first five minutes, Empire crosses the threshold 300 never did in its whole running time, from "visually silly and narratively heightened but nonetheless relatively faithful relation of a semi-legendary event" to "an illiterate's fantasy that involves a few historical names."  And yet this is the very least of what makes Empire awful—Gladiator was a great picture (even a Best Picture!), despite leading one to not just believe that the Roman Republic was in fact restored by some fictional guy, but that this was a good thing, like the Roman Republic wasn't just as repugnant as the Empire.

We can all live with artistic liberties; perhaps even liberties that involve Xerxes being magically transformed into a sex monster.  Unfortunately, the liberties taken in Empire, even more than its true facts, are boring.

Boredom?  THIS. IS. ATHENS!

I have not synopsized the film, for its plot should probably be familiar to you, but in briefest: it's the early 5th century B.C.; Xerxes' Persia is invading Greece; the city-state of Athens in general and Themistocles in particular doesn't like it; they mobilize a navy; and naval battles of varying degrees of interest, usually low, ensue.

The execution of this seemingly no-lose scenario is more risible than you might readily believe, but consider the worst parts of 300, namely the abysmally bad padding scenes focusing on Spartan politics (original to the film, absent from the book).  Now imagine them expanded to feature length, interspersed with far less engaging action sequences each far worse than the least impressive offered by the original.  (Indeed: even the brief scene of a trireme crashing in the original is superior to all of the naval combat in this.)  Picture that, and you can picture watching Rise of an Empire, and I saved you $11.

No movie under the 300 banner should have this many bloody words in it.  But, for reasons known only to his own obscure gods, every time Murro notices the most minute amount of momentum accidentally accruing to any scene, he will stop the movie cold, so Themistocles can talk, and talk, and continue talking until the heat death of the universe happens.  There are somehow thousands of speeches about freedom in this movie.  None has any real content; each is longer than Ben-Hur.  I was young when I began watching 300: Rise of an Empire; exiting the theater like Charlton Heston in another of his many iconic roles, I now wander an apocalyptic wasteland, hardly able to remember what life was like in the before time.  I cannot recall what happiness felt like, and last night I shot an albino.

The parts of Empire which are new whatsoever all revolve around Artemisia.  Coming from the mixed up files of Frank Miller, Artemisia is a character based in the absolutely vaguest possible way on Queen Artemisia of Caria, a Greek from Asia Minor who served as a commander in Xerxes' forces and who neither trained as a master swordswoman nor, to the best of my knowledge anyway, spent her youth having her motivation raped into her by Athenian sailors.

In Empire, she's portrayed by Eva Green, whose performance has been praised as the watchable part of this movie.  And this is accurate.  She injects a measure of gusto into all her moments on camera, and has a somewhat entertaining, rough-ish sex scene that nonetheless features no completion for anybody, let alone me, wherein she attempts to seduce Themistocles to the Persian side with her breasts, but fails.  So this scene still kind of sucks, but I concede, readily, that it involves the only two aspects of Empire that exist beyond criticism.  Ultimately, Green does manage to muster your interest.

Here is what you absolutely need to be aware of regarding Green's turn: "interesting," in the context of 300: Rise of an Empire, has no meaning whatsoever in the outside world.  If Eva Green exceeds the efforts of her fellow actors, it is because any of them could be replaced with a Teddy Ruxpin programmed to talk about Greek unification, and as long as it had abs, you would never notice.

The most profitable comparison is to Charlize Theron as the evil queen in Snow White and the Huntsman, another dull, ugly, and mercenary project that assumes the American public enjoys this kind of crap and was somehow proven right.  Yet, in Theron's person, it found an entirely unexpected justification for its own existence.  Theron is off the fucking wall in that movie, screaming, carrying on, becoming a flock of ravens, swimming in milk, and so forth, and she is legitimately great.  If that movie is even marginally recommendable—something I'm not quite prepared to state, but for rhetorical purposes let's just assume it is—it is entirely due to her.

In Empire, Eva Green takes on a role of similar substance; she gives, in the manner of a competent actress, a performance.  And that is the show, folks.

So, if you, like me, were misled into believing that Green elevates this pathetically limp action film into entertaining super-camp, take those scales off your eyes and behold the true-truth: the best part of this movie would go unnoticed in any movie that had anything else worth seeing at all.  And if you're in it for her admittedly perfect physique, or any of the other perfect physiques on display—porn exists.  This shouldn't.  Let us make it go away.