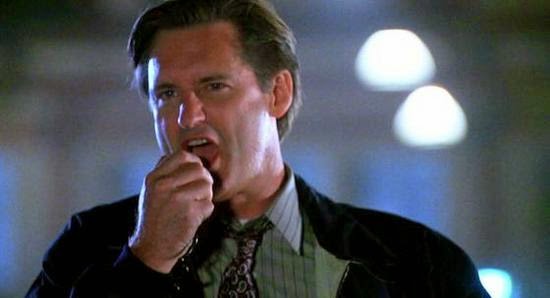 I passed Kinemalogue's one-year anniversary much as I do my birthdays: without fanfare and trying to ignore it entirely, since all it does is underline the meaninglessness and brevity of all existence.  It did not go unnoticed, however, that Friend Brennan of the excellent Popcorn Culture celebrated it for me, for which I belatedly and with earnest sincerity thank him.  (Hey, one of us has a sad-sack nihilist schtick to maintain, and it ain't you, B.!)

However: I do like nice round numbers and my review of Gamera vs. Jiger marks 100 posts on this here web zone.  Some stats!

96 of those posts are reviews.

2 review posts are are dual reviews, which means 98 movies have been formally reviewed upon Kinemalogue, though 142 have been graded in all.

10.5 review posts are about superhero movies, counting The Lego Movie as half.  Since both of the dual reviews are superhero movies, that means that 12.75% of my formal reviewing output has involved discussing superheroics.  Unlike some people, however, I do not find this displeasing.

8 review posts are about kaiju films (the 1 non-review, non-year-in-review post is an introduction to the concept of Gamera for the uninitiated, and remains my single least popular post of all time, so I guess everybody was already aware of the giant turtle and also does not care about my childhood reminiscences; and, well, fine, I don't care about yours either).

4 posts are tagged with what kind of short haircuts the actresses in the movies have, a feature I discontinued because I decided it's weird and creepy.  That said, Rinko Kikuchi still looks great in an asymmetrical bob.

1 post I've considered removing because it's amateurish and involves at least one too many pictures of Tom Servo, but it's unfortunately part of a trilogy retrospective.  So fuck it.

40 review posts are about science fiction/science fantasy movies, and another 7 are about straight-up fantasy films.  The percentage of SFF has nowhere to go but up as I begin my new, no-doubt irregular feature, Cardboard Science, beginning with Forbidden Planet later today.  Or tomorrow.  Or Tuesday.  Or when I get around to it.

It would almost certainly be easier to count the number of reviews that are not of "genre" films, especially since I reject the idea that there is such a thing as a "non-genre" film.  It is therefore 0.  Told you it would be easy.

22 review posts are part of series or director retrospectives.  I intend to start a few new ones, specifically for the Planet of the Apes series—hopefully before Dawn comes out, bless my heart—and for John Carpenter, as soon as I complete at least one of the two that are still presently ongoing.

And I do realize that one of them has been left fallow for far too long.  It's not because I've lost interest in Masaki Kobayashi's work, but rather because I saw The Thick-Walled Room before Sincere Heart and My Sons' Youth, then lost track of time, and since I now basically have to watch it again, I didn't want to be bored from repetition when I did.  I certainly intend on getting to the really good stuff in the 1960s; and, oddly, the Sincere Heart review has proven a popular post, although I suspect this is because it has "Obamacare" in the post's title, not because random googlers love Japanese melodramas about teenaged love.

Possibly related, possibly not, starting around January at least three or four hits a week are coming from google searches for child pornography.  Needless to say, at least I fucking well hope, there is no such thing on this blog.  I actually think they're hitting mostly upon Carrie, wherein the verb "fuck" comes within a few dozen words of the term "15 year old."  Certainly, the post is unaccountably popular given everyone stopped caring about that movie before it even came out.

But I don't know for sure, because I can't tell what exactly the searches are for without clicking on them, and I'd prefer to stay on the "communist sympathizer" watchlist I'm already on and not be elevated to the "suspected pedophile" watchlist that I very much wish to avoid.  In any event, if you folks had an iota of moral courage, you'd have committed suicide already.  Of course, if we had moral courage, as a society, we'd have a pervasive surveillance state that actually accomplished anything, and you would not need to be put in such an awkward position.

In a less horrifying but also prurient vein, a couple hundred hits a week are also folks looking for hot shots of Andrea Riseborough, Alison Lees-Taylor, and Bar Paly.  Don't take this as a scold, but you guys (and perhaps gals) do realize that women of equivalent attractiveness exist in high-definition, hardcore pornographic form, don't you, and not only on terrible photographs I took of my television with my phone while Oblivion was on pause?  Well, they do!  There is a promised land, and there are ten times as many great pornos as there are great narrative feature films.  I concede that none of them were shot by Joe Kosinski and delicately lit by Claudio Miranda on Darren Gilford's beautiful sets, but maybe when they get ahold of the $200 million remake of Shame, a film that I think we can all agree would be enormously improved by a lightcycle sequence, we'll get to see Kosinki and Company do the old in-out, in-out.  Starring Olivia Wilde and Garett Hedlund.  Wait, where was I?

In conjunction with the average score, I think this indicates I'm a big ol' softy.  I do, however, like how my grading scale, which maps flawlessly onto the bog-standard four-star system, lets 2 1/2 star films keep funneling student loans into this august institution despite their comparative failure.  Sorry, I mean "keep their dignity."

And here's the part where I get seriously self-indulgent:

My worst review is my first, Mad Max, and Mad Max Beyond Thunderdome is pretty bad too.  (Oddly, Road Warrior is inoffensive.)

My best review is The Passion of the Christ.  I think it's the single most valuable thing I've ever wrote.  It is contrarian and for a good cause.  It was one of the most enjoyable things for me to type out, since it let me ride my atheist hobbyhorse while simultaneously maintaining a critic's objectivity.  Plus, I think the "live by the nail" joke is hilarious, and so did my dad, although he also told me never to repeat it to my mom.

My favorite is The Counselor, which is contrarian for an arguably bad cause, and which is probably the most personal piece I've ever done on here.

My most hypocritical is Don Jon, wherein I tell fictional characters how they should be having sex even though I hadn't at the time been laid in like four months.  Runner-up: Frances Ha.

My most pretentious is The Double, wherein I talk about gender for about 1000 words and production design and cinematography for the other 1000.  Runner-up: John Carter, which is 1000 words about color schemes, 3800 words about match-cutting, and 200 words about the actual plot.

My best-written is probably The Raid 2.  It's brief, it's tight, it's funny, it's informative, and it's appropriately critical without devolving into grinding minutia, which is my worst tendency as a writer.  It's a trick I learned in law school and one I have been desperately trying to unlearn in the three years since.

So: here's to cinema, to another 200,000+ wasted words, to the hope that one day I can forget I have a J.D., to the good folks that I hope I've entertained and whom I adore (I mean Brennan, Tim, Neil, and others who don't have Christian names), and, finally, to my growing fanbase of child molesters and chronic masturbators apparently.  Today we celebrate our Independence Day!
Posted by Hunter Allen at 11:17 AM