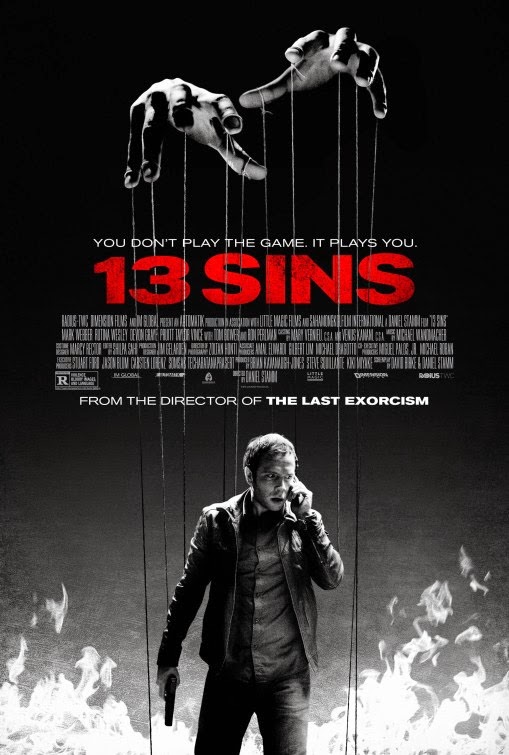 2014, which I am now calling the Year of the Thriller, continues rolling along.  Now comes (actually, in March it came) a remake of an obscurish Thai film that is only less obscure itself because it showed up on Netflix Instant Watch, where I happened to notice it.

I think it's a period piece.

13 Sins is this little movie's name, and it appears to have been conceived as Man Up: The Motion Picture.  Therefore, it's a minor miracle that a film that could be encapsulated in that immediately-overexposed, never-useful phrase could have wound up even slightly good.  After all, the moral of 13 Sins is that normative masculinity is basically evil, but that it also sucks to be a complete pussy; however, it doesn't seem to care or even realize that, by the time the credits roll, it has failed—along with the rest of us—to come up with a workable third way.  This crucial recognition is one reason why The Double is close to genius, whereas 13 Sins is kind of facile and dumb, despite the fact that they're making almost identical points.  (The other reasons are largely cinematography- and production design-related.)

Yet 13 Sins is decidedly more than just "slightly good," and is in fact kind of a blast.  The secret to its not-inconsiderable success is that its shallow social commentary is sharply subordinated—12 times out of 13, anyway—to a nasty farce that is incidentally about class, but is mainly about the wonderful black comedy that ensues when you try to take a corpse out for coffee.

We meet Elliot Brindle, our Beta Male du jour, in the midst of his precarious, premarital bliss: the wedding's in a few days, and he's already knocked up his intended.  We know this won't last long, however, because this is a thriller that will at least attempt to be rollicking, as opposed to a lame indie drama.  And indeed, it doesn't last as long as you think it might.  Within the first ten minutes he's already been fired from his job by an abusive boss who is still belittling him even while he has him thrown bodily out of the building.  For Elliot, unemployment means not just the ordinary inconvenience of not having an income to support his nuclear family.  It means, also, that the outpatient care for his developmentally-disabled brother and the assisted living home for his awful father can no longer be afforded.  Lucky for Elliot, then, that he gets a mysterious phone call from an ebullient stranger, offering him a thousand bucks to smash a fly.  And so the game begins.

This is, as I'm sure you've guessed by now, only the first of Elliot's thirteen labors.  The next is to eat the fly.  Then he has to make a child cry, which is simply delightful.  And each subsequent request is still more heinous—and still more profitable.  Do you get it?  Good, because otherwise I'd worry about you.  And now we must compare it to Would You Rather?, which is obviously better because it has Jeffrey Combs, but even though it is hard to believe, there are a few good movies that don't have Jeffrey Combs.

The person with whom I watched 13 Sins had some problems suspending her disbelief.  This is understandable, because she has never watched Rope, or indeed much of anything particularly good that was also made before the year of her birth.  We know, of course, that the alternative to Elliot's unlikely naievete is a ten minute movie of no account whatsoever.  Even if it should be obvious to Elliot that this game will take him to places that are logically implausible, physically treacherous, and morally outrageous, who could possibly have it any other way?  And they do get truly ridiculous: I have alluded to enough of their content that you either now want to see this movie, or else I just can't recognize you as fully human.

But there's a calculation to the weirdness of 13 Sins: perhaps a full two-thirds of its individual scenes are almost entirely plug-and-play—it's like the first half of Die Hard With a Vengeance, extended to feature length.  If that sounds too complimentary—although I do mean it as a compliment—I suppose you could compare it to any given Saw picture instead.  (Though I think that still might be a compliment, depending on which one.)  The upshot is that there is a certain weightlessness to the film, and this is both a good thing and a bad one.  It would be a lie to say that Stamm and Birke don't take advantage of it, because they absolutely do.  But it is also very much the case that almost all of the incident of the film could be radically altered without changing the plot, or even altering much of the dialogue. 13 Sins is deliberately designed as a string of semi-connected vignettes—in fact, they're better-connected than they have any right to be—each featuring arcane action that is, by definition, completely out of character for our hero.

Whatever that "character" is, anyway.  Elliot—as competently performed by Mark Webber—is straight from the master mold of the American Everyman.  He's a schlubby loser in a bracingly nondescript way, and he's "good" in that he loves his family and he tries not to cause anyone else any specific harm—at least, until he does.  It's unlikely you'll find much hint of personality in him, other than the meekness that has failed to inherit the Earth, and the deeply-buried resentment he harbors on account of that failure.

There's only one genuinely interesting turn by any of the actors—and it's certainly not Ron Perlman or Pruitt Taylor Vince in their well-observed but largely-unsurprising extended cameos.  And by "interesting" I only mean "different," and by "different" I'm not sure I mean "good."  Finding an ally in the script, Devon Graye plays Elliot's brother Michael in diametric opposition to the standard version of his stock character; that is, the one famously pontificated upon by Robert Downey in Tropic Thunder, and the one infamously explicated upon by Ed Norton in the press for The Score.  Instead, Graye basically plays Michael as a largely functional homo sapiens sapiens, capable of a full range of emotion (including sarcasm), only he has a bit of a speech impediment, some semi-serious social issues, and terrible grooming habits.  He looks like a duck but does not quack like one, and it's kind of... cool?  Or maybe it's tremendously awful and I'm a monster.  It's very hard to tell anymore, but I kind of dug it.

I have also reached the point where I can envy even this guy's hair.

As Elliot progresses through his challenges, the predictable things occur: he is targeted for arrest; he catches glimpse of the vast conspiracy that runs this world; he learns that he is not this game's only player; and, despite himself, he begins to revel in the power of his own wickedness.  It is a credit to the film's energy and enjoyability that it is never exactly disappointing that Elliot's "arc" is handled in the most lazily schematic way it could be.  And on a purely plot-mechanical level, this thriller genuinely surprised me exactly once; even here, I am sadly certain this says far more about my own cleverness than the film's.

But does anyone really care if their Waffle House omelet was made lazily, so long as it is still good, and still comes with hashbrowns?  13 Sins is an extraordinarily lazy omelet, yes—outright thieving a setpiece from The Counselor, for example.  But it does come with hashbrowns, and they are absolutely floating in a pool of ketchup.  This is to say, there's basically no chance it might stay with you even long enough to be digested—but it is delicious going down.