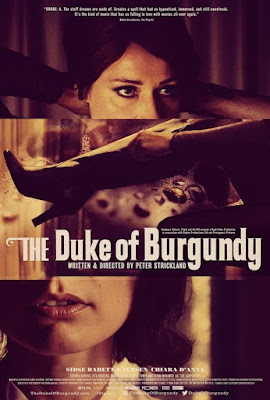 The Duke of Burgundy, from its enigmatic title till the roll of the credits, is a deeply, self-consciously artistic motion picture.  Happily, however, this isn't always a bad thing, even if just liking it would give me cause to wonder if I'd lost my simple virtues, whereas genuinely loving it (and I think I do love it) should get me put on some kind of critics' watch-list.  What next?  Am I going to reevaluate such fellow pretension-mongers as Under the Skin or Enemy and decide that, actually, they're worthwhile uses of anyone's time?  Good God, I hope not.  Of course, there might be an element of luck to all this.  I was fortunate enough to approach Burgundy without any background beyond the good reviews and the basic notion of its plot.  And this really is lucky—because if I had, in fact, recognized the name of its writer-director, then I'd have gone into it with a pretty tremendously bad attitude, to the point I really might not have enjoyed it at all.

Yes, Burgundy comes from the very same warped mind that made, in my estimation, the single worst film of 2013, one of only three official zero-scores I've given in two and a half years—namely, Berberian Sound Studio, a terrible, terrible movie, that is everything about art cinema that I hate (and which you should hate too).  Burgundy even recapitulates many of its sins—its long stretches of quiet, its general plotlessness, its non-narrative visual asides that have little to nothing to do with either story or themes, its deeply-internalized characters that are hard to get a handle on.  The difference—the way Burgundy turns all these potential problems into strengths—is that, at its core, it tells a devastatingly human story, of the kind that few movies even bother with in the first place.  Anchored by two incredibly sturdy lead performances, what could have been a suicidally dull exercise in pure atmosphere, punched up by lurid and arguably meaningless surrealistic flourishes, is transformed instead into a terrificially moving and exciting romance, of sufficient gravity that the atmosphere doesn't just float away into ethereal boredom, while this time the director's preoccupation with stylistic interludes really does wind up selling the breakdown of a poor woman who's presently finding it very hard to bear the burden of her reality.

We begin with Evelyn, bicylcing her way through 70s horror film credits to a forbidding, somewhat-Gothic old house in the middle of nowhere—"middle of nowhere" may indeed be all too accurate—where she is greeted at the door by a statuesque, sour-faced woman approaching middle age, but not quite there yet.  The mistress of this house is named Cynthia.  The first thing she says is, "You're late."  Evelyn gets to her daily chores—cleaning, dusting, and rubbing Cynthia's feet—and the first impression we have of Duke of Burgundy is that it's a slow-burn old-time drama revolving around the cryptic rape of domestic servants.

But the true shape of their relationship incrementally reveals itself, and we realize that this is something else entirely, a dominance-submission game that's swallowed their whole lives, as Cynthia puts on what amounts to a constrictive costume so she can become what Evelyn desperately needs, which is a browbeating, mean-spirited mommy who pisses on her face when she doesn't do a good job shining her shoes and locks her in a cabinet for dozens of hours at a time.  Perhaps unintuitively, the really interesting part is the focus on Cynthia.

There is a moment where you get the feeling that this might be an arthouse version of American Beauty—there is a look of boredom on Cynthia's face that approaches existential despair—and this isn't the worst analogy, but Burgundy takes on a less self-entitled dimension as it becomes heartbreakingly and even terrifyingly clear how very little Cynthia is getting out of this game anymore, and how obviously Evelyn is topping from the bottom in the most direly selfish and destructive way, unable to so much as approach sexuality without an element of contempt mixed in, while eager to explicitly register her disappointment with Cynthia's performance whenever they return to "normal."

We follow Cynthia as Evelyn comes very close to shattering her putative mistress's own sense of identity, and Burgundy is almost exclusively a very, very well put-together two-hander, with Sidse Babbett Knudsen and Chiara D'Anna finding the right notes for pretty much every single scene, so that even though Burgundy is slow and (to an extent) uneventful, it really never stops being compelling.  (If it were about straight people, you could call it positively Houellebecqian.)  You get a sense of deep and long history, and Burgundy is as good an examination of the possibility of tedium in an adult long-term relationship as a movie should ever dare putting onscreen—crucially, without ever being tedious itself.  Or at least not very tedious—obviously, I could quite easily see many viewers stridently disagreeing with that assessment.  Yet the most miraculous part of all is that Burgundy is, at turns, very funny—Knudsen in particular delivers some truly great line reads—but "funny" is surely not the first thing you'd expect from a film that only ever stops being a dry melodrama when it runs off into the hallucinogenic hinterlands of style-for-the-sake-of-style.

This brings us to Strickland himself—and his rather exceptionally uncanny direction.  The other method through which Burgundy makes its tension-filled but inherently-static narrative palatable is by simply being gorgeous.  Cynthia's house—if it is actually Cynthia's house, something left deliciously ambiguous—is exquisitely-photographed by Nicholas Knowland.  It's even more exquisitely-designed by Pater Sparrow.  There is an emphasis upon texture and tactility to both the cinematography and production design that puts Burgundy in the top ranks of 2015's most lovely pictures.  But the defining motif of the house—indeed, Burgundy's whole world—comes from butterflies and moths.  And that's where the film gets its name, though you'd be unlikely to know this without looking it up.  However, if you did know that, then it wouldn't come as a surprise to discover that The Duke of Burgundy is nearly as obsessed with lepidopterans as Jame Gumb.

That's where the uncanny part comes in: Strickland, rather than setting his story in any particular time or place, has elected to completely invent one.  Burgundy, when it manages to leave the house, doesn't amble far, and you get the notion that it couldn't even if it wanted to.  If there is anything outside this small community of women, it is difficult to say what it might be—noticeably, there isn't a single man in the whole film.  But just as strikingly, there is never a reference to any kind of world outside this tiny township, whose all-female population has devoted their lives to the only two passions that appear to exist in this dimension: specifically, uncomfortably creative sex and deep aurelian hobbyism.

The result is a kind of pocket universe; and it is here that Strickland's surrealism finds purchase.  The austere overdetermination of every little thing in every frame, along with the extensive focus upon offbeat interests and the explicit creation of an artificial, even plastic society, often gives the feeling of a BDSM romance as directed by a logey Wes Anderson—though bear in mind that this isn't a negative criticism, and anyway even Anderson has never gone this nuts.  The only really flat note in Strickland's scheme is the use of literal mannequins in the back row at the butterfly club's presentations.  It's a gesture that could be read as the director delighting in the creation of his phony actuality; personally I prefer to read it as "unfathomably dumb."

But it's of a piece, anyway.  The film sneaks into experimental horror territory often in its back half, as the nightmare of a failing relationship is literalized.  In fact, Strickland comes dangerously close to overdoing it in the demi-climactic sequence, as the camera slowly moves into the darkness of Cynthia's shadow-shrouded pussy like we were entering the fucking stargate.  I don't think I'd have forgiven him if he'd ended this movie with a bang, rather than the whimper it obviously needed; but he backs off, thankfully, and returns to a semblance of reality, although there is still a lot of the last twenty minutes of 2001: A Space Odyssey in the last twenty minutes of this brittle domestic drama.  Tastes could obviously differ on whether this is a good thing or not, but I think it is.

These high-flying exercises in style really do remain grounded by the genuine emotion they represent.  The best parts of Duke of Burgundy are the ones where you can see the women really trying to recapture what it's obvious they've lost—in other words, the best parts are the ones where it makes you cry, because it requires you to confront the fact of how badly-designed we are, for the function we're supposedly made for in the first place, which is to love each other.