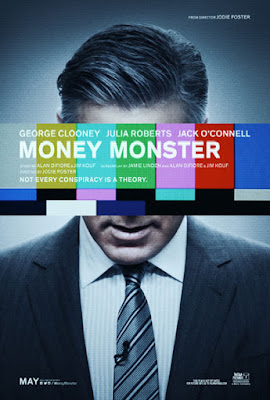 Jodie Foster rocks her Sidney Lumet impression in what amounts to the best film of the year so far.


I know it's not a pleasant or professional thing to police critics, but I do it all the time, so there's no reason not to lead off by asking why so many folks feel the need to not only compare Money Monster to The Big Short, which is reasonable enough, but also to wonder aloud if Monster has already missed its window of cultural relevancy, which is insane.  (Hell, I'd add "privileged," except that 99% film critics only barely have jobs in the first place, so that would just be mean-spirited overreaching.)

Well, either way, a movie like this one won't lose its cultural relevance in our lifetimes.  Partly this is because the system we live in will not be changed quickly; but mostly it's because well-constructed satirical thrillers are never going to be so ubiquitous that we can just afford to ignore the great ones.  And make no mistake, Monster is one of the great ones.

The film naturally revolves around its namesake, and this is Money Monster, a parody/recreation of a Jim Cramer-esque financial advice show, that airs on FNN, a parody/recreation of CNBC.  But this show, being fictional, stars one Lee Gates.  A smug, smarmy buffoon of an economic prognosticator, he's the kind of guy who looks good on TV (he's George Clooney, so he looks great on TV), but whose financial expertise (if he ever had any in the first place) has been eroded by the long years he's spent elevating his programs's style of clownish showmanship over anything that even so much as resembles actual journalism.

Sure, I'd listen to what this guy has to say about money!  But then again, I also think Flava Flav has some penetrating insights to offer about the nature of time in an Einsteinian universe.

Meanwhile, in the control room, we'll find his level-headed, burnt-out director, Patty Fenn, who's spent every day for years trying to wrangle her unruly star—and this never-ending struggle is probably the reason she's taken a job with another network and neglected to mention it.  Despite this schism, their workday begins much like any other, with Gates making lame sex puns about stocks, and bullying his poor producer into personally testing a new erectile dysfunction cream, in order to see if he ought to recommend investing in its manufacturer.

Unfortunately, today is the day that one of Money Monster's most dedicated viewers, a particularly disaffected young man by the name of Kyle Budwell, has managed to break into the studio, wielding a gun, and also wielding a homemade suicide vest, which he promptly forces Gates to put on.  With the star and crew of Money Monster thus made hostage, Budwell turns the program into a public stage to explore the questions that have clearly been on his mind for a while.  Why did Gates recommend buying stock in Ibis, the high-frequency trading company?   What caused the "glitch" in Ibis' algorithm that sent $800 million screaming into the void, collapsing the value of the new company's shares, and wiping out Budwell's life savings in a single afternoon?  And just whom do you hold responsible, when the economy breaks?

So, the first thing that could have gone wrong with Money Monster is blatantly obvious: its progressive machinations depend upon our sympathy for (and, to some degree, identification with) a dopey burned investor who, on paper, is not significantly more pitiable than the man who walked up to a roulette table with $60,000, and walked away with none.  Happily, this impression—which the film's rather bad trailers do precious little to avoid—is swiftly dispelled within the film itself.  This is not a tale of an investment gone wrong so much as it is the story of corruption and malfeasance, and the real villains behind it going completely unpunished.

So, yes, I guess it is pretty topical.

Thus once the film re-arms itself with something more akin to righteous fury than an entitlement mentality gone wrong, it manages to score some pretty palpable hits, not only against a rigged system that crushes proletarian boobs like Budwell, but the secondary industries that have sprung up around the financial sector in order to package and re-sell the very ideology that's doing the crushing—the media that worships wealth by peddling lies.

Of course, none of this leftist posturing would matter very much at all if Monster didn't also populate its scenario with interesting characters, before moving all those characters through a compelling genre framework on their way to the truth.  On the first count, the film does better than you'd probably even expect.  There's a solid case to be made that even without a hostage crisis animating things, a halfway-decent drama still could have been made about this program on an ordinary day.  Still, the movie we got—the one that does have the hostage crisis—is a lot more likely to be better, because the screenwriters correctly determined that this was the quickest and easiest way to push their characters to the limits, and force them to question their own bad assumptions.

The film lightly sketches its cast, to be sure—it is not foremost a study of human beings, and once we get to the cardboard capitalist bad guy, this will become even more apparent. But, of course, that's the reason God invented movie stars: their personae fill the gaps that screenwriters might find it preferable to leave open.  And that's exactly what we get here, with the script and the actors working in tandem to effortlessly create a pair of three-dimensional leads within the severe constraints of a taut 94 minute thriller.  There's a palpable sense of ancient camaraderie, not to mention an overly-familiar contempt, that radiates between George Clooney's Gates and Julia Roberts' Fenn.  And although almost all their interplay occurs over an earpiece—they spend perhaps a grand total of three minutes on camera together—the reality of their relationship is unquestionable, and it's meaningful, and it's fun.  (Perhaps I ought to mention that Monster is, while not exactly a comedy, on occasion extremely funny in its cruelty.)

Clooney gets the best of the bargain here; after all, Gates is the character who actually changes over the course of the film.  Gates' panic quickly evaporates; and Clooney uses his star power to dominate his dialogues with Jack O'Connell, who generously recedes before the more experienced actor, in a way that's just as true to Budwell's growing realization that he's already in far too deep to ever get out.  (Incidentally, the many negative reports accruing to O'Connell's New Yawk accent are greatly exaggerated.  It's as good a working-class NYC accent as you could feasibly expect any Englishman to give.)  But it's through Clooney—despite his vast bluster—that this film gets its arc.  We can see Gates coming down with an acute case of Stockholm Syndrome, which turns out to be a good thing: the film grips ahold of the loveliest irony it possibly could when it turns out that Gates' captivity has in fact restored to him a certain strange brand of freedom.  And so he uses the crisis as an excuse to rebuild his atrophied journalistic muscles and actually do something worthwhile—maybe for the first time in his whole life.

When it comes to the thriller bona fides, Monster might do an even better job than it does as a polemic.  However, you may not immediately notice: in its first act, it conserves its energy to a remarkable degree, methodically introducing all the moving parts of what turns out to be a very wide-ranging plot, especially for a movie mostly about two men in a TV studio.  This doesn't necessarily redound to the film's credit. One's first impression may well be that one's sat down to a didactic (and generic) hostage movie.  But the benefit of this approach, if there must be one, is that it lulls you into believing you know exactly how the expected beats are going to play out.  The thing is, you mostly do, but while the ending is as predictable as the sunrise, this script is delightfully willing to knock your preconceptions around in the middle; and when it does open up the geography beyond the single location of the studio, it impressively keeps the mood completely airtight.

So we get that enormously satisfying scene, where Gates attempts to leverage human goodness (and the irrationality of the market) against his life; later, when Budwell's pregnant girlfriend gets into the mix, the film takes this dime-a-dozen plot element to a place that actually holds the power to genuinely surprise.  (Indeed, it probably counts as a plot twist.  And it manages to astonish even while it subtly identifies the quintessentially masculine form of Budwell's problems—namely, the devastatingly harmful assumption that anyone in America who is white and male but still poor is an objectively disgusting loser.  It's a minor theme here, but a well-developed one, kicked off with Gates' aggressively brovian posturing on his show, a stage patter filled to the brim with lines like "Man up!" and "Grow some balls!"—which is to say, language designed to exhort stupid men into risking large amounts of money, apparently to prove they have a dick.)

Luckily, while it would otherwise be too easy to get a sense of Budwell as a Trumpian shithead, one of the first lines he speaks is a denunciation of using foreigners and immigrants to distract us from the real problems at hand.  Nice save.

But it occurs to me now that I haven't even mentioned Jodie Foster yet, for whom Monster represents her fourth feature; but that's probably only thanks to the whisper-quiet aesthetic she brings to the piece.  I suspect it's completely and totally deliberate.  It certainly feels correct: there's a lot of the 1970s in Monster, and more specifically a lot of Sidney Lumet.  The screenplay, after all, is so clearly a mash-up of Dog Day Afternoon and Network that I'm honestly surprised the film avoids name-checking them.  Visually, Foster relies on her cinematographer, Matthew Libatique—I presume they first became acquainted with one another on Inside Man, itself another work of High Lumet pastiche, courtesy Spike Lee—and the result is a steely, cold, and technocratic metropolis, as accurate to NYC in 2016 as Dog Day was in 1975.  Meanwhile, the few smatterings of self-conscious imagery in the film—Gates' grasping hand raised in opposition to an American flag comes to mind—may well have been smuggled in by Libatique, since Foster is clearly not interested in highly-memorable, meticulously-composed visuals, much as Lumet often wasn't (or at least wanted to make you think he wasn't).

Foster departs from the template, however, by emphasizing the thriller part of her satirical thriller, barreling through the script's layers of globe-spanning deceit; and so her film is very fast and very lean, and while it never abandons humanity (not even in its supporting cast), it's more of a machine than any Lumet film outside of Deathtrap.  But that's certainly fine—Monster's strengths lie in binding its thriller plot to its characters so tightly there's never a real difference between them.  In this regard, Foster's direction is basically flawless.  Her movie manages that very tricky balance between propaganda, people, and entertainment.  Not too bad, Foster.  Maybe the next time Clooney makes a movie, you can give him a few tips on how to make a good one.

P.S. Even recognizing that it's a direct riff on Syriana—up to and including that they're both images of George Clooney with his eyes sliced out by the title—I have a deep-seated need to say just how much I love that poster.
Posted by Hunter Allen at 9:12 AM