"Be careful driving home—because Christine is out there!" 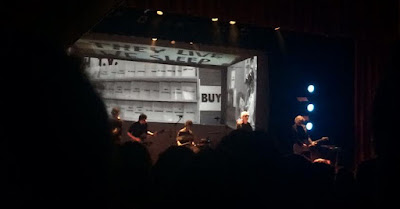 Sometimes Pittsburgh isn't so bad.  Case in point: Sunday night John Carpenter graced our terrible, economically dysfunctional city with his presence, offering up a live performance that, to the aging director-musician's immense credit, began at 8 o'clock sharp, and boasted a sample of the old and new.  I got to see it, and it was fun—billed as a greatest hits retrospective, it didn't disappoint.  (Also present: Cody Carpenter, doing most of the actual work as lead keyboardist and the member of the Carpenter family who isn't very old—though it should be noted that JC is tremendously sprightly, all things considered, and this made me happy too.  Anyway, Cody certainly did a fine job.)

The set started with the main themes from Escape From New York and Assault on Precinct 13, then dipped into "Vortex" and another Lost Themes track, and continued on in that vein.  I was annoyed, temporarily, that Christine and Prince of Darkness weren't getting any play—especially when the main themes from They Live and In the Mouth of Madness were.  (I remain steadfast in my determination that the score to They Live is perfectly good for the movie, and not of any great account as a musical piece in and of itself; but I will say that Carpenter's reorchestration of the Madness theme has made me better-disposed toward the piece than I had been previously, even if I still think it kind of sucks that that's what he came up with for what is otherwise his finest film.)

Meanwhile, the Halloween theme made its obligatory appearance, and it was fantastic, though the bass-heaviness of the live show did the iconically creepy twinkle of that song absolutely no favors.  It should also surprise no one that the closing credits theme from Village of the Damned didn't show up—whereas Ennio Morricone's opening credits theme from The Thing did, doubtless because this show was designed to trade on JC's status as a director of movies people liked, rather more than his status as a composer who crafted some really great tunes.  (This is clearly how Big Trouble in China wound up in the set.)  But that's a shame, since Carpenter the Composer can stand on his own.  Plus, if he was going to cover other composers' works from movies that he happened to direct, I'd have really loved to have heard what the band would've done with Jack Nitzsche's majestic theme from Starman, which is a far more pleasant piece to listen to on its own.

Well, these are minor points: in the encore, he did get to Prince of Darkness (and that was exciting as hell, even if Prince of Darkness, being in many respects an electronic opera, inevitably gets shorted if one merely excerpts it), and, for the final number, the theme from Christine, and this was the most surprising part of the show for me, because my understanding was that Carpenter was at best indifferent toward the film itself.  But you'd never have guessed it from his introduction of the theme, the loving montage playing behind him, and the placement in the show as the finale.  So right on, JC.  I'm glad you've come around to recognizing that your fourth-best movie is amazing.

But it would've been nice, considering the "retrospective" context, if Carpenter had been more eager to credit his collaborators, above all Alan Howarth.  Still, it's not like this is completely out of line.

There was also some new stuff from Lost Themes II, which I enjoy, but not as much as the last album.  So it goes.  Additionally, Tom Atkins was in the audience, since apparently the poor man lives here.  Unlike every other person in attendance, I did not see the necessity in pestering him, though (in fairness) he seemed to enjoy it, so perhaps I should have.

Altogether, it was great, and you should be jealous of me.  I know I am.
Posted by Hunter Allen at 8:49 AM