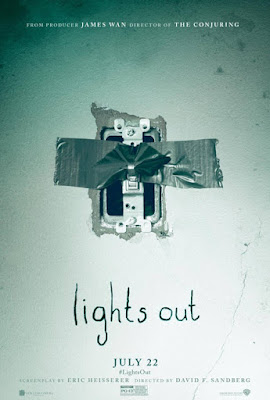 
You know, I don't feel like I have high standards for my horror films, but the genre does seem to disappoint me on a pretty routine basis.  And, well, that sets the stage for Lights Out: yet another PG-13 frightener, this one was produced by the horror director-of-note, James Wan.  He's a man who has a certain visual flair, and whose best movie is still almost certainly Saw, from way back in 2004, whereas his best movie since then is still probably Insidious.  Which perhaps tells you all you need to know about the depth of the rut we're toiling in.

I did not need it to be an instant classic.  Hell, if nothing else, while Lights Out has garnered a faintly positive response, at least I didn't have to walk into it with people yelling in my ear that it would CHANGE THE WAY I WATCH HORROR (or whatever the hell it was that It Follows and its fellow festival circuit champions were supposed to do).  But, damn.  Lights Out couldn't even be bothered to meet the frankly minimal expectations I did have.

Expectations aren't always a bad thing, and sometimes they really are just a synonym for standards.  I don't think I have to defend my right to expect that Lights Out would do the littlest thing it could have done: that is, put its intriguing fright mechanic to work within a more-or-less passable story, thereby proving itself to be an entertaining and perhaps even scary way to spend an hour and a half.

To the film's credit, I guess—and I suppose to the credit of its director, David Sandberg, upon whose tiny short film this feature-length expansion has been based—Lights Out does manage to eke out somewhere around ten minutes of very solid Gimmick Showcase.  In these ten minutes, the movie focuses exclusively upon its darkness-dwelling ghost, Diana, and the interesting way in which she shows up in the shadows, only to disappear whenever the lights come on.  (When the lights are on, you see, she's unable to directly affect corporeal objects.  And yet she's nonetheless still free to move.  Then, when the lights go back off, she can terrify and injure and even kill her hapless victims—if, it must be said, with a somewhat disappointing frequency.)

The body count of this horror movie with a nigh-on omnipotent adversary is four.  Two of those characters have names.  Three of them are actually killed by the monster.

Well, either way, it's in these moments, when the film plays fair with its premise, that it's at its closest to actually being successful—that is, when it deploys its ghost not just as an experiment in how to use jump cuts to breed jump scares, but as a way to generate at least two genuinely fascinating thriller setpieces, wherein the mechanics of Diana's disappearing act evoke the "Aha!" that the filmmakers are asking for, rather than the sad and confused "what?" they more often tend to get.  And, if you've seen the trailer, you don't need to be told that Diana herself is a laudable creation, as pure an image as a horror film could manage—she's a black, twisted female shape, with strands of wild hair, a set of Nosferatu claws that are more subtle than they probably even needed to be, and, finally, a pair of faintly-reflective eyes, not unlike a cat's.  She's often framed against doorways and the like—a silhouette bearing unambiguously evil portent.  It would probably be too much to say that stuntwoman-actor Alicia Vela-Bailey is putting on any real performance here, but she's creepy in her makeup, and that counts.

But, to repeat myself, Diana is creepy and interesting only as long as the film is playing fair.  I mean, yes, I know: it's a fool's game to try to determine what actually constitutes "darkness" in a motion picture, because there's pretty much always going to be some light coming from somewhere.  (The number of frames depicting actual pitch blackness can be estimated to be around "zero.")  And it'd take a real idiot to start thinking about blackbody radiation in a movie that's pretty clearly based on screenwriting magic.  But you wind up thinking like an idiot anyway, because Sandberg doesn't give the slightest fuck about how light works even within a context where we're apt to forgive him.  And so eventually we get to the part—seen in the advertising—where our heroine is skulking around with a Goddamned blacklight, and nothing makes sense anymore.  No, at this point it's distressingly clear that Sandberg and his screenwriter, Eric Hesseirer, are just throwing ideas against the wall.  Sure, it's entirely possible that they hoped that one of their ideas might stick; but it's altogether certain that their overriding concern, at this stage, was simply stretching the premise out to an actual feature's length, no matter what it took to get there.

Anyway, the (not-really-a-)blacklight at least looks a little bit interesting, carving purple wedges out of the frame with its glow; but the way it's used is in service of so much bullshit—it's a set-up for a potential vulnerability, which is then studiously ignored, probably because if it had worked, it would've been an intolerably dull way to have ended the movie.  Unfortunately, this raises a difficult question: "Why the hell is it in the movie in the first place?"  However, I think we answered that question above.

Indeed: "so much bullshit" describes virtually all of Lights Out's wretched back half, which indifferently ignores the rules it's already established, whenever it's convenient to do so, and which further reveals that Diana isn't just walking or running, invisibly, while the lights are on, but can actually teleport from shadow to shadow, turning an interesting mechanic into an dull and arbitrary one.  For what it's worth, the back half also demonstrates that our heroes are profoundly stupid even for horror movie characters, considering that while they have a pretty good grasp on Diana's abilities, they nonetheless arrive at their confrontation with her, carrying nothing but a candle, a hand-cranked flashlight, and a book of matches—a book of matches that isn't even used to light the fucking house on fire when Diana takes measures to kill the electricity.  (At the very least, that would've offered something a little more bad-ass and fun than the purely joyless technical exercise we actually get.)  So they've all got rocks in their heads, sure, but the really terrible thing about it is that I'm not even sure we're even supposed to notice: after all, Lights Out is a film that apparently assumes its audience cannot fucking read—at least based on the way it has our central heroine speak aloud every last syllable of the scrawled crazy-person text she finds written on a basement wall, while she's hiding.

Well, at some point I should probably actually describe Lights Out's dumb heroes, along with its dumb story.  The viewer shall recognize, almost immediately, that it's an uninspired, and somewhat incoherent, mash-up of both The Babadook and (of all things) The Ring, except not one that stars a real actor, such as Naomi Watts or Essie Davis. (And the best thing that can be said about this is that it makes me appreciate both those films all the more—especially The Babadook, because dear Lord, Jennifer Kent and Essie Davis were working miracles in comparison to this one.)  We begin with a prologue, in which the harried night manager of a mannequin factory, or something, is killed in his office by Diana; it turns out that this man was the (step)father of our protagonist, Rebecca, who escaped her childhood home long ago, but which has now become a hellhole of twice-aggrieved manic-depression since her mother, Sophie, lost her second husband in a row, and this time to what seems like a random murder.

Poor Billy Burke.  He never stood a chance without the 'stache.

But leaving her mother meant leaving her half-brother, Martin, who has lately come to bear the brunt of Sophie's collapsing mental state, and who has naturally turned to his older sister for aid.  Given that Rebecca has been bluntly and dubiously characterized over the course of a great many scenes with her milquetoast boyfriend Bret as a woman who has closed herself off emotionally and is unwilling to bind herself to any manner of relationship, it's actually rather surprising when she nevertheless accepts the responsibility of saving her brother from their crazy mom.  (On the other hand, she does this via kidnapping, which gives the filmmakers an opportunity to throw in a useless and also black social worker, to whom our heroes uniformly condescend.  But at least they don't see fit to outright kill her, and this, I guess, is what the horror fan calls "progress.")

It rapidly becomes apparent to Rebecca that her mother's prosaic mental illness is accompanied by the straight-up supernatural evil of Diana; and that's where the horror stuff really comes into the picture, as we learn that Diana is either an aspect of Sophie's insanity given life, or just a ghost that's feeding upon Sophie's sadness, depending on how you read the film (since the film itself rather plainly doesn't have an opinion).

So it's "about" grief.  Except, you know, it's not.  In any event, it's definitely a lot more "about" just how lazily a screenwriter can graft the vague semblance of a theme onto his scenario without the slightest conviction in the telling.  Don't hope for any redemption in the acting here, either, for the acting is so flat that it's only moderately convincing as a bunch of people reciting lines from a prepared screenplay.  The one, odd exception is Gabriel Bateman.  He plays Martin.  He's also about ten years old, and he's honestly the sole performer in Lights Out who manages to feel like he's so much as trying.

Then there's the rest.  Maria Bello, as Sophie, plays "bugnuts" without intensity or variation; Teresa Palmer, as Rebecca, is out-acted by the hilariously-on-the-nose set decoration/product placement that covers every square inch of her character's apartment (indistinguishable from a goth teen's dorm room, circa 1995, assuming, that is, that our goth teen was attending Warner Bros. University); and let's all pray for Alexander DiPersia, who doesn't try to wrest the slightest bit of personality from the empty vessel of Bret, a character whose description begins and ends at a gross doormat who only ever whines about commitment, that is, when he can even be bothered to be a recognizable human being at all.  (If you've ever wondered what someone might possibly mean when they say they're deeply, viscerally offended by a female character who "lacks agency," Lights Out provides you a penetrating insight into the mystery.  Bret exists solely to serve as a vehicle for Rebecca's character arc, and he therefore comes off, depending upon the scene, as an idiot, as a desperate baby, or as a complete, soul-sucking void.  And, in the end, Bret can't even do the one damned thing that badly-drawn characters in horror movies were made for in the first place.)

There is less than 20% of this movie that pays off on its promise of giddy, mechanical ghostie pleasure; the other 80% is dumb, derivative exposition, misunderstandings regarding why the film's gimmick ever initially worked, and character interaction that explodes on takeoff.  It wins a point back for the pseudo-grimness of its finale (though it immediately loses at least one half of a point again, for the ugly CGI realization of that finale).  Now, Lights Out is not a crime against art; but even for a spooky time-waster, it's a failure.  What we have is the purest sub-mediocrity; a film that, honestly, might exist mainly to make its producer's own haunted house movies actually look accomplished.