Joe Dante, part I: If it's a good picture, it's a Miracle 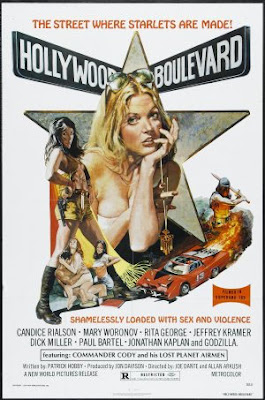 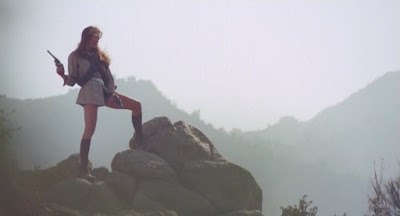 Joe Dante is a figure that deserves the kind of journalistic scrutiny that, I'll be the first to admit, I can't really provide; but maybe somewhere along the line we'll be able to answer the great question, "What happened?"  After all, forty years ago, Dante clawed his way out of the minor leagues and into the bigtime.  When he got there, he spent a whole decade authoring a startlingly impressive run of superhits and sleeper classics. (Gremlins! The Burbs!  Explorers, maybe, if you're me!)  But then he spent the next decade burrowing his way right back into obscurity, chasing his own predelictions and a vanishing audience, who weren't at all sure what to expect from him anymore, even when they could remember his name.  And so, now, a decade after that, Joe Dante's films premier on VOD, where they are met with the collective disinterest of the whole wide world.

For the moment, then, let's concern ourselves only with the beginning.  Cast your mind back to 1976: Dante's life in pictures had actually begun almost ten years before that, with his campus clipshow, Movie Orgy.  This had been a collage of follies from the Z-cinema of previous years, all put together without the permission or knowledge of the various rightsholders, which Dante had circulated around colleges with the financial backing of Shlitz malt liquor.  Nevertheless, this achievement (or whatever) soon led to a real job for Dante—in the cigarette-stained editing room at Roger Corman's house.  However, once he had established himself within the primal soup of Corman's New World Pictures, young Dante grew and grew.  Eventually, cutting together trailers and the occasional feature was no longer enough for the hungry wannabe.  In '76, he asked Corman for a film to call his own.  And Corman, who'd spent the 1960s and 1970s nurturing new talent, from Coppola to Cameron, said "sure, fine," and paired him with his colleague Allan Arkush—for DGA rules, you know, are for people who give a hoot.  Unfortunately, the film Corman offered Dante was Hollywood Boulevard—a movie that had come into being as the result of a bet between Corman and one of New World's executives, Jon Davison.  Corman had dared Davison to make the cheapest, fastest film in New World's history.  And, while you think about that, consider this: Davison succeeded.

With only $60,000 and ten days to bring their picture in, Davison, Dante, Arkush, and their screenwriter, Danny Opatoshu, elected to cheat instead.  And thus did Boulevard become a metafictional parody of life at New World Pictures itself, deploying a copious amount of stock footage from other New World movies as stand-ins for the product generated by the fictional B-movie house of Opatashu's imagination, "Miracle Pictures."  "If it's a good picture, it's a Miracle," the tagline goes, and it's one of the better jokes in the whole movie—possibly because both that particular line, and the name of the studio, were lifted entirely from the 1941 musical comedy, Hellzapoppin'.

Boulevard centers upon the ballad of Candy Wednesday, a young woman who arrives in Hollywood from the heartland with a head full of dreams.  Before that, though, we meet Miracle's filmmakers—a director, a producer, and a writer—in the midst of shooting the last stunt for one of their terrible movies, ending with the plummeting death of the stuntwoman involved (though, to their credit, they did get the shot).  This ties in quickly enough with Candy's struggles, who gets a gig as Miracle's new stuntwoman thanks to her sterling performance in her first "job" in Hollywood—as a getaway driver for a pair of bank robbers who'd told her they were shooting a movie.  No, Candy isn't terrifically bright.

Candy is soon shipped off, alongside her fellow actresses and the Miracle film crew, to the Philippines.  There, stock footage and upsetting sensuality ensue; then they return to the States, where (once again) stock footage and upsetting sensuality ensue.  But, eventually, it becomes clear that even though neither the screenplay nor the pair of directors has the remotest interest in such a thing, what we're actually walking our way slowly through is a murder mystery: for every time Miracle tries to make a film, one of our stalwart thespians always happens to die.  (And not to spoil a 38 year old movie too badly, but it takes no special genius to predict the reveal.  Naturally, it turns out Boulevard is only Opatoshu's long-winded, 83-minute way of saying, "Bitches—amirite?")

It does take one awful long time to get around to the murder mystery, though, and maybe that's the absolute worst thing about Boulevard.  At the least, it's the most facepalming senseless: it squanders a perfectly good premise—a retrograde one, sure, but a perfectly good one—on a whole lot of late-70s-style, zany-as-shit farce, which is (of course) just about the least amusing kind of farce there is.  The chief pleasure, I suppose, is the way Dante and Arkush fill out the film with reference jokes—though, mainly, it all just makes you wish you were watching Death Race 2000 again instead. 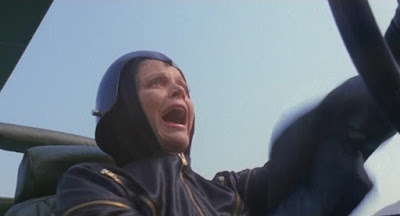 Where's your outrage over this all-female remake, idiots?

(There is one very good reference joke beyond New World, however: this is a post-apocalyptic "mutant," who is so clearly a man in a gorilla mask that even these crappy filmmakers feel the need to do something about it; and so they plop a space helmet on him.  Obviously, in our post-MST3K world, the joke's a lot less obscure: it's a nod to 1953's infamously-bad Robot Monster.  But hey, nerds, if you do manage to make it to the end of this goofy piece of garbage, Robby the fucking Robot is waiting for you there, like a prize at the bottom of a box of stale cereal.  And can't you just feel the warm pleasure of recognition pooling in your seat when you see him?)

Genuine laughs do come occasionally in Boulevard—though mainly in the first third, before the film crosses a line it can't recover from.  Only one sequence, the first that really digs into the possibilities of all that New World stock footage, pays off with something within spitting distance of actual comedic exhilaration.  It's still quite basic, Dante and Arkush using their trailer-honed editing skills to humorously pair the actresses standing around and blasting machineguns at a horde of evil Vietnamese who defiantly refuse to enter the same frame, or even the same general landscape, as our screen heroines.  All the while, the "1812 Overture" roars over this corny pseudo-action, and the whole thing plays as a legitimate laugh-out-loud moment: an embarrassed, self-deprecating admission that this truly is all that this film is capable of doing. 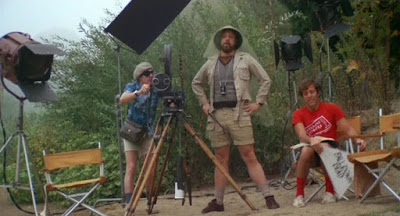 As for those performances, they really range across the spectrum of bad, going from the dully mediocre (which is to say, most of them), all the way to the bad-and-inspired.  And so, pretty much every line from Death Race's Calamity Jane, Mary Woronov, playing the haughtiest of Miracle's boob delivery devices, is shiny enough to trick you into believing it's gold, even if it's actually only pyrite, and she comes the closest of anybody to delivering a performance anyone in their right mind would call "good."  Next, as Candy's lousy drunken agent, we've got none other than Dick Miller himself.  A veteran B-actor going all the way back to the 50s, Miller soon became Dante's good luck charm—he has, as far as I can tell, appeared in every one of his theatrical features.  In their first collaboration together, you can sort of see why: he clowns his way through the whole thing.  I can't say he's the worst clown.

And, finally, we must have Paul Bartel, as Candy's director.  Naturally, Bartel's doing what Bartel may well have done in a hundred damned movies—in any event, it's exactly what he's done in every movie I've ever seen him in.  This would be granting a physical and human shape to the very concept of "outrageous pomposity."  And, frankly, it is abjectly terrible acting.  But I'll happily give him this much: he's extraordinarily good at it.  And casting him here, as Miracle's pretentious exploitation director, is so spot-on that it qualifies, more-or-less, as "perfect"—at least, it does if you also arrive armed with the foreknowledge that the pretentious-and-exploitative Death Race is in fact the real-life Bartel's own claim to directorial fame.

And then it all goes crashing through the window when we slam right into that (apparently obligatory) rape scene.  I shall paint you the picture: it's a scene of gang rape from inside one of the films-within-a-film, namely the Phillipine-set action picture that's being played by footage from Corman's Savage!  While they're shooting, this fictional gang rape devolves into a "real" attempted gang rape, which was clearly hilarious to all sorts of assholes back in 1976.  Of course, we get to see it again when Candy attends the premier, and although it sickens her, it ultimately leads to—guess what!—another attempted gang rape at the drive-in.

It would be naive bordering on silly to not expect this kind of thing from a Corman production—though I am, for the record, a naive and silly person.  It is also not unclever: the drive-in scene is staged with sufficient nonsensicality that it can't be read as anything else but an active, angry swipe at the notion that exploitation movies breed real-life violence.  (Plus, given that one of the attackers has spent several minutes moaning about how "disgusting" the scene was—"worse than television!"—it's taking direct aim at the moral scolds of its day, too, implying that while they're banning violence and pornography with one hand, they're the ones who're actually jerking off to it, with the other.)

So: it's crass, unfunny, and offensive.  But the real, fundamental problem is this: I've never seen a better example of what people actually mean when they say "parody" and "satire" aren't the same thing.  Because what we'd been watching was a gentle parody.  It was a parody that threw itself badly off the track by a tasteless rape joke, not long before blowing itself to total smithereens with another, extended rape joke.  But it was the kind of rape joke that could only play—if it could ever play—in the kind of nasty, mean-spirited satire that this movie never wanted to be.  After all, this movie never wanted to be much of anything at all in the first place—and that's a condemnation that I've never been able to lay at the feet of any Corman film until this moment, even as cheap and exploitative as all of them always are.  Anyway, it certainly doesn't help matters one bit that, as usual, you are supposed to file the images away and masturbate to them later.  What a wonderful time it must have been to be alive.

And that's pretty much it for this dubious "Miracle."  It's not funny enough to redeem its disastrous tonal divergences; it's not insightful enough to forgive its content; and it's never exciting or thrilling enough when it comes to its lousy little giallo, either.  For it bears repeating: the plot of Boulevard is left to starve in the corner, right up until the climax.  And there, it emerges from the shadows with one last burst of strength (and, I'll happily concede, a surprisingly inventive, non-terrible setpiece)—but only right before it keels over and dies from a feature-length campaign of malnourishment.  It's a shocking waste, this film, and if I didn't know that things got a lot better soon, I'd quit right now.