I am for an art that has explosions, and car chases, and maybe a little skin 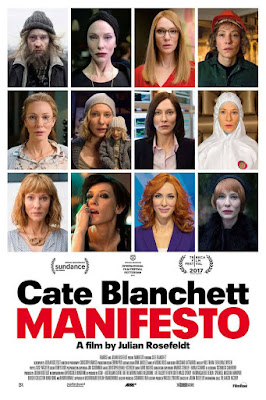 A little airless, but not arid, Manifesto is a strange and fascinating trinket, centering itself upon a feature-length consideration of art's history of outright comical hubris.

2017
Written and directed by Julian Rosenfeldt
With Cate Blanchett 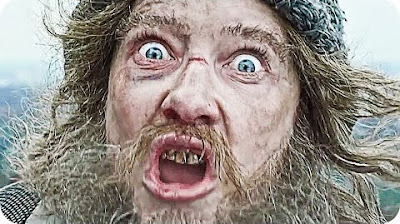 Julian Rosenfeldt's Manifesto began as an art installation—more to the point, a series of twelve separate art installations—and, boy, it shows.  That it flows as well as it even does is nothing short of miraculous; still, as you watch the thing, you aren't likely to ever shake the impression that it belongs in some museum somewhere, entertaining (and, let us be clear, not ever exactly edifying) a meandering stream of patrons, and doing so at roughly twelve minutes a clip.

The film excerpts about four dozen manifestos (or manifesto-like objects) of various origins; it puts their sliced-to-ribbons words into a movie star's mouth; and, all the while, Rosenfeldt arrays about his star a series of constructed worlds, each of which, in theory, reflect the ethos of those manifestos' authors, either directly or (more typically) through a thick-as-molasses layer of irony, and often a surrealistic brand of irony, at that.  Most of its sources will doubtless be more recognizable to the art history majors, though there are a few very notable exceptions: Marx's Communist Manifesto, which opens the film, is world-historically famous; anybody familiar with cinema will immediately recognize the Dogme '95 manifesto by its dumbassed list of dumbassed rules; and, of course, the Dada Manifesto reveals itself by its content (and, also, by the fact that the word "dada" appears in it twenty or thirty times).

There's something a little dadaist about the whole thing, frankly.  Sure, Rosenfeldt is often satisfyingly on-point with his imagery.  (Indeed, that Marxian late-late-late-stage capitalist wasteland is so on-point it's almost dull; but his Futurist human anthill of computer screens and telephones is outright breathtaking; and a Dadaist funeral, with the guest of honor presumed to be the age of reason, is another standout.)  But often enough to be bothersome, Manifesto is just desperately unclear in its symbolism.  (The mash-up of Dogme and Jim Jarmusch, presented as a lesson taught by an elementary school teacher to a classroom full of booger-eating children, is outright baffling.)

Manifesto is exceedingly clear, however, about its willingness to burn through virtually all of its best visuals early on—in fact, all the good ones I've mentioned so far have already appeared, in full form, within the first thirty minutes of this 94-minute presentation.  (Not that it's a complete desert: throughout its runtime, Manifesto is always more interesting-looking than not.  I only mean that as it goes on, we get less and less imagery of fantastic, impossible things, and more and more shots of the inside of people's houses.)  But if Manifesto's back hour were a desert, there would still be a clear oasis, and this would be the "Conceptual Art" module, which retains a genuine power to wow you.  Rosenfeldt was wise to hold onto this one till nearer the end, given that it's the highlight of the whole project; it includes not just our aforementioned actress playing against herself, but also her delightfully self-aware toss-off of the line, "Conceptual art is good only when the idea is good."  Never has a truism been truer.  Manifesto tests its proposition for an hour and a half, with a lot of neat ideas and a surprising sense of humor.

Indeed, Manifesto is much funnier than you'd think the concept would support.  The single funniest moment comes during the "Pop Art" module.  Here, an ordinary family suffers as best they can the tedium of listening to their mother recite Claes Oldenburg, dreamily, endlessly advocating for the kinds of art they might actually like—and, eventually, and inevitably, the youngest child starts to straight-up nod off.

The Oldenburg piece, though, is just about the only one that is presented here with enough integrity to actually get its point across.  (Oddly, maybe, since the original piece is objectively awful, more than a dozen pages' worth of "I am for an art that [blank]"; and I can't imagine reading the whole thing without nodding off myself.)  Anyway, the film Manifesto most vividly recalls is Linklater's extraordinary Waking Life—like Manifesto, it backed up its own wildly-discursive yammering with zinging visuals and a very unique mood—but Waking Life was ultimately about the notions it presented, and Manifesto, quite patently, is not.  Rosenfeldt made a trade-off when he made this particular talk opera, I suppose, and in exchange for giving up his grip on any of the actual ideas being bandied about within his chosen excerpts, he's taken aim at the concept of manifestos themselves, as a special mode of performance all their own that, after all, usually do say more about the blinkered mindset of men who have convinced themselves that they have something very, very important to say about the world of art, which they tend to conceive of as the whole world, period.  But the other side of the sword is that the pieces, juxtaposed and spliced-together, work best—that is, if they work at all—as fancy-pants rhymeless poetry.

The good news about this, however, is that Manifesto never comes off as sterile, even though it easily could've been.  That's still mostly thanks to the woman of the center of it all; and, of course, I've really buried the lede.  Cate Blanchett is the whole show, and she is wonderful.  It is, I'd wager, her best work in years; conceivably, ever.

But I am not here to praise her performances as pieces of great acting, as such; I'll leave that to the marquee-name critics who confuse the creation of characters with the creation of poses.  Instead, what Manifesto does is use Blanchett's poseability to its best possible effect—that is, it uses her ability to wear all sorts of silly make-up, and (of course) to put on one stupid voice after another with real conviction.  These abilities, which are usually the means to an end rather than an end in and of themselves, are still as well-deployed here as in any project Blanchett's ever done.  (And, given that she deploys them quite frequently, that is saying something.)  Somewhere, I imagine, Tom Hardy must be gnashing his teeth into powder; but Rosenfeldt wanted a woman for the piece.  He sought Blanchett specifically due to her turn as the best of the Bob Dylans in Todd Haynes' similarly-conceived, but altogether-insufferable, I'm Not There.

So, as a result of both Rosenfeldt's and especially Blanchett's exertions, the intention behind the whole is plain, even when the intention behind a great many individual choices might not be: beneath each and every role, the screaming arrogance of the original authors rings true.  It's not just the most meaningful thing about Manifesto; it's the most abidingly enjoyable thing, too.

Obviously, not every role is a winner: Blanchett's ballet mistress is barely-understandable garbage, and the Russian accent Blanchett saddles her with is somehow even more of a cartoonish cliche than the one she sported back in Crystal Skull, which, I'll remind you, was there used in the service of a quintessential cartoon villain. It probably doesn't help that it comes part-and-parcel with one of Rosenfeldt's most visually boring scenes (despite it taking place in a dance studio whose troupe appears to be putting on a production of Alien: Covenant: The Musical).  Meanwhile, the only role that registers even slightly as a character, properly speaking—that is, a person whom you could possibly imagine existing outside of Rosenfeldt's intellectual exercise—is the one who delivers the Dadaist Manifesto as a eulogy.

But there are still more winners than losers here, out of Blanchett's thirteen regenerations.  (Above all, there are the newscaster and weathergirl, who jointly present the "Conceptual Art" sequence I mentioned earlier.  Blanchett seizes upon two wholly different parodies, albeit equally goofy ones, of a standard American TV accent—and, when married to the strangeness of this particular material, it is absolutely nothing less than 24-karat comedic gold.)

At the end of the day, yes, Manifesto is nothing whatsoever beyond a well-done artsy wank—and it's all right to feel a little cold toward something that would never return any of the warmth you might otherwise wish to offer it.  But artsy wanking can be better, or artsy wanking can be much, much worse.  Luckily, Manifesto really is one of the good 'uns.