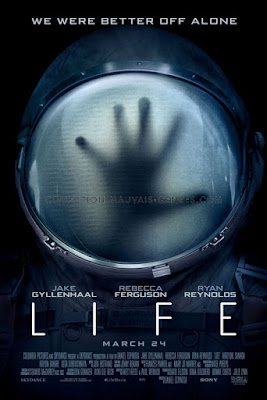 We can admire Life for its purity, at least, although maybe that's a funny thing to say given that it comes made mostly of prefab parts.  The long tracking shot that opens Life, sweeping through the zero-g corridors of the International Space Station in the midst of a crisis, for example?  That belongs to a great movie, and it's only the littlest problem that the great movie it actually belongs to is Gravity.

I've always said there's nothing wrong with a rip-off done well—it is, after all, the rip-off's mercenary desperation to profitably entertain that gave us an Orca for every Jaws, a Flash Gordon for every Star Wars.  (And I'm sure there are many other examples that didn't come from Dino De Laurentiis.)  It's hardly a noble impulse.  But, often enough, it gets the job done.  Life gets the job done.

So Life is a haunted-house-in-space B-movie a few rungs down the ladder from Alien, gussied up with an aesthetic that badly wants to remind you of Alfonso Cuaron's experiential masterpiece—and, to its credit, at its very best, it could even be briefly mistaken for it.  Its real strength, however, is in the novelty of its combination: while whatever else you want to say about Life's general dearth of inspiration is almost bound to be true, it does offer something kind-of new, namely a monster that actually functions, and in some respects appears to be built to function, in the kind of no-gravity, no-oxygen environment that us humans were not.  That the monster, spinning like a pinwheel with its aerofoil arms, looks a little silly to start out with is just the charm of Life's design ethos at work.  (But then, when that monster ultimately develops a structure that mimicks a face, that's not charming at all, since while you surely recognized what manner of schlock you were watching here, you realize you were still expecting more honor out of it than that.)

That monster comes aboard as such things often do, thanks to the hubris of man.  In this case, hubris has taken the form of a probe returning from Mars with an exobiological specimen inside.  The job of prodding at the thing falls to Dr. Derry, while the rest of the crew watch on with varying mixtures of wonder, fear, and bad jokes.  (Like virtually all movies about astronauts not called The Right Stuff, Life is quite content to vivify its stock characters by pitching them to the audience as a clutch of preening fratboy jackasses.  This includes, to a certain extent, the women, and even though all of them get well-appointed stock humanizing subplots, they naturally wind up distinct almost exclusively by their job title and by the degree of jackassery they exhibit.  Inevitably, our flight engineer, Rory Adams—and if I tell you he's played by Ryan Reynolds, I imagine it completely gives the game away—eclipses them all with ease.  Anyway, there is a reason why I listed the cast in order of their apparent rank.)

Well, things go swimmingly for a while aboard the ISS: the score is full of notes of awe, rather than terror, and there is some joy to be taken in watching a scientist smile.  But the score gets ahead of the characters soon enough, in the same way we got ahead of them the moment we sat down to watch the film.  The creature, dubbed "Calvin," quickly grows from a microbe to a macroscopic organism, and—following a few tests that have done little but piss it off—effects its escape, wreaking havoc within and without the space station.  With little hope of an immediate rescue, the crew must fight to survive long enough to figure out a way back home, all while being whittled down, one by one by one.

If you didn't know already, you definitely know now: Life is nothing but an excuse to pit human beings against a terror from the dark, like a thousand other slasher flicks before it.  It occasionally reaches for something deeper, and these are, by and large, the worst parts of the movie.  Sometimes all you really want out of a film is just a fun meatgrinder.

Luckily for us, director Daniel Espinosa is generally competent at crafting such a thing: the microgravity conceit makes the standard events of the scenario a fair bit more innovative than most Alien rip-offs, and the monster itself (contra Alien) is a nicely plausible creation, despite being the result of some less-than-stellar CGI.  (Okay, sure, Derry's line about the beastie being composed of cells that simultaneously perform muscle, nerve, and visual functions is the most abject kind of biological hokum—and it's frankly obnoxious that when Espinosa gets up to some boring, de rigeur POV shots for Calvin, he can't find a cool way to represent the 360 degree vision this line promised us, and instead just slaps a stupid digital filter on the thing—but the idea is certainly neat in a corny B-movie sort of way.)  Espinosa clearly errs on the side of showcasing Calvin, and maybe that's why this movie isn't as good as Alien (one reason, anyway)—but that doesn't mean it's an inherently bad choice.

Meanwhile, the film's several thriller modules, though probably technically interchangeable, do build upon one another in a way that escalates the tension—that first death is certainly a keeper, at least in terms of surprise.  Astonishingly, as the film goes on, Espinosa manages to integrate an obligatory Evil Government Subplot in such a way that not only does he keep it from completely derailing the main plot, the subplot actually adds to the main plot's momentum.  He even gets a little something extra out his ensemble of semi-somebodies and slumming stars: besides treating their characters with a certain respect, which helps them partially override a screenplay that often wants them to be nothing but yammering goofballs, every actor here is capable of at least hitting the one or two personality notes they've been given.  (And Jake Gyllenhaal, God bless him, is more-or-less ideally cast as the sensitive weirdo who might as well be called the "protagonist," and who waxes, half-crazed, albeit in a style that would prompt Charlton Heston to shout "SPEAK UP, MAN!", about the precious tranquillity of space in comparison to the plague of humans infesting the Earth.  Gyllenhaal's even a good enough actor that his reaction to another character's death is capable of pulling an actual emotional response out of the audience, too—that is, a response beyond, "My goodness, it sure is awesome how you died!")

Of course, the bread and butter of Life, like any movie with its modest goals, are its kills; and the kills it inflicts upon the gallant crew of the ISS are imaginative and varied, especially given its monster's limitations—goodness, the list includes a drowning, of all things.  In this regard, Life is almost legitimately great.

Unfortunately, that "almost" is doing so much work in that sentence it deserves overtime; Life is certainly not as great as it could have been.  Imagination's one thing, and the willingness to properly commit to your R rating is another, and while Espinosa demonstrates an aptitude for many things in this picture, finding the violent poetry of a gore set-piece just isn't one of them.  If it were, when Calvin's first victim dies, because the thing's pulled his mouth open and crawled down his gullet, the final result would be a body rent asunder,  Fury-style, rather than the anticlimactic heartstopping we get.  At the very least, Espinosa would've remembered the first rule of thermodynamics, and the corpse would've kept spinning and spinning right where it died, never stopping until hours had passed and the accumulated collisions of gas atoms finally robbed it of its momentum.  (Gracious, you could come back to it, half-eaten, ten scenes later, if you wanted!)  As it stands, the body kind of just hangs there, neither mutilated nor uncannily still moving in accordance with the merciless laws of physics; and I don't even know what we're supposed to get out of that shot, other than a confirmation of the character's death.

The better is almost always the enemy of the good enough in these things, though; so let's not get too angry when Espinosa often lets the better get away from him.  (Not the drowning, though: that is—honest!—pretty fucking incredible.)  It's best we save our ire, anyway, for the ending, since it must've been just dynamite on the page.  It was, at least, conceived in the nastiest, most grimdark-nihilistic parts of its screewriters souls—and Espinosa decided to half-destroy it, inside the illegible inferno of some hilariously bad editing.  The film's storytelling has not been precisely flawless throughout, but when Espinosa tries to get tricky, things really break down: Life transparently wants us to recall the smirking misdirection brought to bear at the climax of the Silence of the Lambs, and doubtless we would have, if only we lived in an alternate universe where Jonathan Demme spent Lambs' post-production blind drunk.

So what we have is a movie that leaves a lot, maybe even too much, on the table: it doesn't have the emotional potency or stillness of a great astronauts in trouble film, nor the killer instinct or intensity of a great space slasher, though, in fairness, it can replicate the impression of each, from time to time—even managing a reasonably clever simulacrum of a Chestburster Moment despite it taking place in a movie that (in the oddest omission of all) completely refuses to speculate about its monster's reproductive capabilities.

But taken as what it is, there are far worse movies you could watch on a lazy Sunday afternoon.  It's impossible to actively dislike a film that's as honest about its nature as Life is, I think, and I respect that honesty a great deal.  It has no intention whatsoever other than pleasing the less-discriminating connoisseur of movies about monsters from beyond space, and in that, it succeeded.