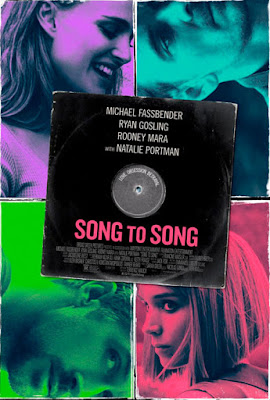 Terry does it again.  (Whether that's a good thing or not remains, as always, a matter of taste.) 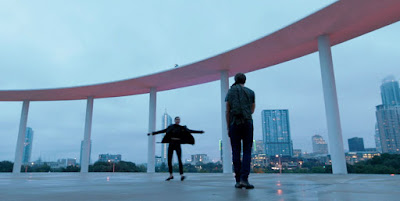 "I'm not in the business of writing about Terrence Malick," I said about a year ago, as I proceeded to write about Terrence Malick; and now, here we go again.  The former lazing teacher and present-day cinematic workhorse released his fifth film in less than six years in the first half of 2017, and I couldn't let it slip by unmentioned—especially since it is, I think, the best movie Malick's made since the first movie in that cycle, The Tree of Life, and (to give the game away) there's a better than even chance it's making my personal top ten for the year.  (Though I should be more cautious in one regard, at least: I still haven't seen Voyage of Time yet.  Then again, neither has anybody else I know, and I'm starting to think it might be an urban myth, like Avatar 2.)

On the other hand, nothing about Song to Song seems revolutionary in the wake of 2016's Knight of Cups, Malick's other "best film since The Tree of Life," which took the willowy aesthetic that's predominated over all of Malick's filmography and especially his modern works—that is, everything since his first masterpiece, The Thin Red Line—and took it to its ultimate logical endpoint, which was either a wonderful and awe-inspiring thing, or an exercise in self-parody so earnestly ludicrous that it made you question whether the aging director was still in command of his cognitive faculties, even if his technical skills obviously hadn't gone anywhere.  I was in the former camp, in case that wasn't clear.  If anything, Cups has only grown in my esteem since seeing it last year; though just to go ahead and alienate everybody (all four people reading this, sigh), I should own up to my heterodox appreciation of Malick's body of work, which for me only begins with The Thin Red Line, as if Badlands and Days of Heaven, both rather boring, and neither one possessed of Malick's later maturity of technique, simply weren't there.

Anyway: if there's one big difference between Song and Cups, both of which are concerned above all things with the texture of light and feeling, it's that Song actually is a narrative film, whereas Knight effectively isn't, leaving you instead with naught but the most obtuse allegory possible (Tarot cards mixed with The Pilgrim's Progress)—not that Song is a "narrative film" the way most films are "narrative films," and not that Song is also not, when it comes right down to it, an obtuse (though very blatant) allegory.  Take the two together with To the Wonder (the visually-limper predecessor to Cups), and we can see now that Malick's tied off a trilogy of sorts, that either makes sex a metaphor for God—or, maybe, God a metaphor for sex—and seeks to examine, over the course of about six hours, what it means to love, and whether or not that's even possible while living in a fallen world, with all the other fallen angels.  Oh, yes: they're super-Christian, and Song no less than the others.  If only all Christian films had this much passion and artistry, maybe more of them would be any good.

Further distinguishing it, at least from its immediate predecessor, Song also has a female protagonist, sort of; or at least Song might give slightly more focus to her than its other major players.  Though, if truth's to be told, its most interesting character is still a man (who also vanishes from the "plot" thirty minutes before the movie ends); and, amusingly enough, the character with the most onscreen lines (as opposed to Malick's preferred mode of verbal expression, voiceover narration) might actually be Patti Smith, cameoing alongside a whole bevy of other musicians, all of whom seem to have been chosen at random, but that's only because they literally were.  (Naturally enough, the music that Malick seems most interested in is still his giant collection of classical cues.)

Alright, "character" may be pushing that word too far, but this is the story as it unfolds in Song, without any stable mooring in time or, often enough, in space: in Austin, TX, there is a music scene, of course, and amongst its denizens are Faye, a young guitarist who might not be as passionately committed to her scarcely-heard music as to what her music and the musical culture around her represents; B.V., Faye's boyfriend, a musician with a rising star, whom she loses over the course of the film; Cook, a grotesquely-wealthy music producer who rules over his town like all music producers do in the movies, and who's fucking, or has been fucking, or will be fucking Faye, depending on precisely which scene we're living in at the time; and Rhonda, the woman Cook married before his hunger turned toward Faye, and whom we notice isn't around anymore.  Song follows them through their ups and (mainly) downs, while Cook tempts them, and taunts them; and the arc of every one of these characters, including Cook's, hangs upon whether they can, at last, bring themselves to see through the material illusions which Cook has conjured before them all, and find real happiness in their lives.

As with all Malick, and especially modern Malick, it's amorphous and arty and terrifically pretentious, and once again the animating force of it is Emmanuel Lubezki's jaw-dropping cinematography, as paired with Malick and Malick's three-man editing team's impressionistic montage.  In pretty much every regard, Malick and Lubezki are only doing what they already did in 2016 with Cups, which is to take a found location (in this case Austin, rather than L.A. and Las Vegas) and turn it into an alienated landscape, finding all the right angles, and all the right positions of the human objects within it, to make it new and strange and beautiful and thrumming with divine power.  Whether or not that power belongs to God or not, however, is a question you'd have to ask Malick: there is a slight but crucial difference in tone to Song, much of it brought about by Michael Fassbender's participation (he reminds you a great deal of his turn as David in Ridley Scott's new Alien flicks), and by Malick's decision to lend Fassbender's Cook the focus almost as readily as he does his "heroes."  Knight of Cups' excess and indulgence leapt out at me as essentially pantheistic, a way to appreciate the God inside every human work; Song is gnostic, and necessarily darker, and it wants us to appreciate somebody else.  If Cups took inspiration from Pilgrim's Progress, Song looks to Paradise Lost.

And bluntly, at that.  Cook, as played by Fassbender and encouraged by Malick, is the literal devil, and while this is scarcely the most innovative thing to do with a music mogul—Phantom of the Paradise was doing this in the 70s, and I'm very sure movies were doing it at least sixty years earlier than that—when Malick goes for it here, that's when Song jumps from "Cups but less novel" into its own unique register of greatness.  It does it in the space of one single abrupt cut, with a Tree of Life-style where were you? formal break that put a big stupid grin on my face like nothing else I've seen in a movie all year.  The pity is it doesn't sustain this abject cinematic mysticism: the film returns to its more subdued magic immediately thereafter, and remains there.

But "subdued" is a relative term, because while Malick and Lubezki may be resting on their laurels (and they are fine laurels indeed upon which to rest), Malick and his editors are not, and Song is put together without the slightest respect for temporal connection, with conversations taking place over multiple locations and across multiple times.  (Strangely, it even flirts with Nolanesque puzzlebox technique, a really odd thing for a movie this aggressively unconcerned with how moments fit together physically: there's a certain closeup of Faye that presents, if anything does, as the film's most noticeable thruline.)  It is, of course, more of the same—Malick's been playing with the flow of time forever—but it is one of his most complete and successful experiments in annihilating it, and enslaving it to the flow of the deeper currents he's interested in.

Necessarily or not, but inevitably—honestly, it's surprising that Fassbender's performance is as unbowed as it is—everyone here is reduced to a meat prop, a delivery device for breathy narration, and a body to be arranged within a frame.  Though by Malick's standards, they are perfectly cast bodies: Rooney Mara, who has complained of her vague instructions as Faye, does what Mara has always been best at, which is presenting a character who's looking for herself and is well on her way to finding it (though as a musician, she does not convince, looking like she's held about as many guitars as she's eaten pies); as for Replicant Gosling's haunted bearing and yearning gaze, I can't tell you why this was only the first time he's starred in a Terrence Malick movie.  Meanwhile, someone decided Natalie Portman should have a southern accent, which was a terrible mistake, though she does "spiritual destitution amidst splendor" as well as anybody else in the film; and, for everybody involved, Malick's usual technique of shooting footage till the actors got bored and started frolicking randomly pays off with some of the choicest frolicks the director's ever captured.  (And maybe this is one reason why Fassbender's performance towers over the rest: my theory is that he's actually seen a Malick movie before, and persevered despite the aimlessness, steadfastly refusing to give the director anything but Satan-as-interpretive-dance.)

It is amorphous and arty and pretentious, I said, and, of course, it's also a tiny bit fraught: its paean to monogamy is marked by a small-c social conservatism that also does never gets in the way of Malick making a frequently-gazey kind of movie that it's quite plausible he's masturbated to.  My own adoration for Rooney Mara's abdomen being similar in kind, if not in intensity, perhaps I am slightly too forgiving of the results.

But there's a value to Malick's pornographic phase, I think—a value to this too-blatant, compulsive worship of youth and beauty, of wealth and class.  At the very least, it serves the film that Malick's made.  It makes it opulent and seductive, and this is the point of Song to Song, after all—its oblique retelling of the Fall.  (It is wonderful and weird that in a single calendar year, we got to see two great filmmakers as different in mentality as Malick and Darren Aronofsky each find their own hyper-idiosyncratic but equally high-handed way to adapt the Book of Genesis in modern dress.)  Anyway, the most powerful thing about Malick's film—besides its images, obviously, and the invisible spaces between those images where the unknowable lies—is its sympathy for the devil: a lost soul, like the rest of us.  It is not beyond imagination that he can love, too, as twisted as he is, and still bring his eyes up toward the light.