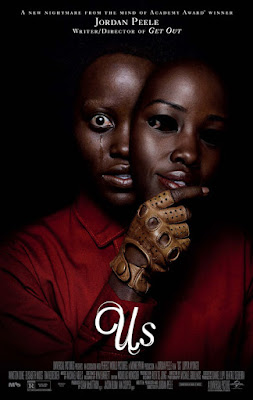 While both atmospheric and willing to go for broke, neither craft nor courage quite manage to win the day against the plodding unscariness and poorly-used metaphors of Us.  (Also, I apologize for the hiatus.  I was busy.)

2019
Written and directed by Jordan Peele 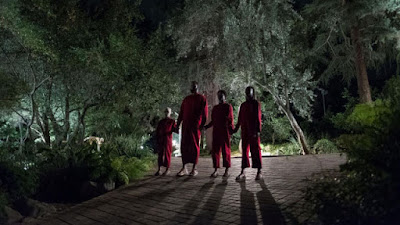 The conversation around Jordan Peele's sophomore film, Us, has wound up divided: between the people who think its last 30 minutes go completely off the rails, and the people who declare that its outright gonzo nonsense is the best thing it has going for it.  To stake a position, I guess I'm more aligned with the latter group than the former; Us at least gets better, once it finally determines it's going to get overtly political and weird.  But those last 30 minutes also seem like the entirely wrong chunk of the film to be concerned about, because before we can even get to them, Peele demands you wade through a solid 40 minutes (or more) of absolute boilerplate horror construction first, of the kind that doesn't take itself seriously enough to be scary, or visceral, or anything, while still taking itself just a little too seriously to be good at being anything else.  Tonally, Us is a bit of mangled mess; and for a good long while during that middle, Us just gets straight-up dull, making the same old mistakes long before it ever gets to a place where it can start making any interesting new ones.

Still, before that, is its first 40 minutes, which range from the perfectly fine to the really good, built on something like the Poltergeist model of establishing middle-class normalcy before destroying it with the horror teased in its first scene, which, of course, involves a little girl discovering something supernatural.  In fact, it starts with the really good—well, at least once we're past a big block of text about tunnels (that frankly tells us too much about the nature of the horror to be unleashed later), and a shot of a cathode ray tube TV with an ad for Hands Across America playing on it, with a paltry collection of VHS classics next to it (that, in combination, tell us too much about Peele's influences, and perhaps tell us too much about his ultimate plan).  Come to think about it, after that, there's a credits sequence with ballet music and a screen-filling stack of rabbit cages, too; I don't begrudge Peele this, exactly, but it's worth pointing out that Us begins fully four times.

Anyway, it's the first real scene that takes us back to a fateful night in the 1980s when young Adelaide Thomas (Madison Curry) wandered off at a Santa Cruz beachside carnival, whereupon she arrived at a modestly racist and unpopular attraction underneath the boardwalk, promising a Native American-inflected vision quest.  It turns out only to be a hall of mirrors with some jump scare animatronics, except there's something else in there with her, and it's hard to tell if it's in the mirrors, or if it's not.  Indeed, it's hard to tell which would actually be worse. 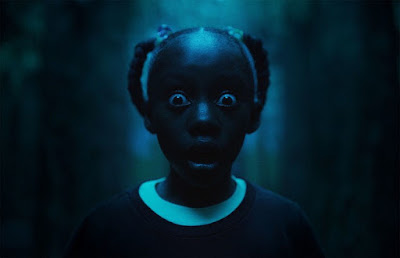 She escapes, but from there, we jump many years ahead; Adelaide (Lupita Nyong'o) has long-since been wedded to her slackly-defined stock character of a husband, Gabe Wilson (Winston Duke), and in the meantime she's borne both a distracted teenaged daughter, Zora (Shahadi Wright Joseph), as well as a dorky prepubescent son, Jason (Evan Alex).  The Wilsons have just arrived at Gabe's family's Santa Cruz vacation home, a trip Adelaide is unenthusiastic about for obvious reasons.  Inevitably, Gabe doesn't take her anxiety or her childhood trauma very seriously until a quartet of red jumpsuited intruders appears in their driveway on their first night and bashes their way into the house.  And it's here that the Wilsons are confronted with the fact that their attackers are, of course, them.  Or at least versions of them, animalistic and terrible, with only their leader, Adelaide's own bizarro duplicate, whom the credits call "Red," even possessing the rudiments of the power of speech.

It's at this point that the middle begins and Us starts to audibly grind itself apart—literally, in fact, in the form of the comical slow-talking croak ("Ooooonce..."), which either Peele enforced upon Nyong'o or else she unwisely chose for herself.  It's a testament to her otherwise really excellent performance as both Red and Adelaide that you do eventually stop noticing it, and even more quickly don't have to resist the temptation to laugh at it.  Though this is almost certainly bound to be your initial, even involuntary reaction to it.

Beyond that, however, Nyong'o's are a pair of extremely good performances which are, for the most part, walled off into their own mini-movie inside the actual movie, with no one else ever really rising much above the register of a Halloween episode of a family sitcom; there are episodes of Bob's Burgers that present their scares with greater gravity, and I'm barely even joking.  It's a streak of disenchanting irony that becomes more and more pronounced as Us goes along, filling up the space where an actual horror movie had previously (if briefly) abided.  It chips away with various credibility-eroding gags and quips—for example, a bit about how the family hierarchy shifts based on kill count, or Zora's rolled eyes at a dadly malapropism in the midst of terrifying societal collapse.  Or I could just mention the scene with a hard-of-hearing piece of Alexa software, which almost feels like a skit.  It's always punctuated with Nyong'o bringing real and credible emotions to the proceedings, but that's all you get out of this phase of Us: only punctuation, no content, like a word balloon with just an exclamation point in it.  I doubt it would work in the good version of this movie, and this isn't even the good version.  The VHS tapes in that aforementioned prologue are Night of the Living Dead, The Goonies, and C.H.U.D.  If Peele set out to make a hybrid of those in fully equal parts, I guess he succeeded, though I don't know why he would want to.  Yet if his goal, as I imagine it was, was to equalize their highly-divergent tones, he failed pretty badly: the outcome is a film that has the social consciousness and ragged emotionalism of Living Dead married to the half-jokey satirical horror of C.H.U.D., forced through a mesh of the kid's adventure silliness of Goonies—which, notably, did not involve the Goonies keeping track of their kills.  Or maybe it's just that the latter two films are about being underground, and Us has already told us it's going to be a lot about "being underground."  The biggest failure in living up to its antecedents, and somehow this even includes The Goonies, is that by the time our heroes make their very first escape from their more-or-less incompetent twins, Us has made it crystal clear that nobody with the surname Wilson is in the least amount of danger, no matter how apocalyptic the situation with their doppelgangers, and everyone else's doppelgangers, may (nominally) get.

You get the distinct and unpleasant feeling, then, that it's all always been in service of an ending that, at least, does go truly crazy, and in doing so manages to grab your interest back.  This is not to say this ending is actually good (or that anyone's wrong to be repelled by it): those last 30 minutes involve at least 10 and possibly 20 minutes of some of the most brutal exposition possible, of the goofiest shit.  Only some of it is useful, and much of it is just plain counterproductive.  Some folks are calling Us "just a horror movie," but that could be preferable.  The Strangers is "just a horror movie," and it's great.  The exposition in The Strangers is confined to four words: "Because you were home."  Us, on the other hand, is a lot more complicated than "because you are us"—to what end, I have no idea—and overexplains its premise to an almost parodic degree.  This is very bad, not just in the way that overexplaining horror domesticates and defuses the mystery of it, thereby making it less frightening, but because the specific explanation we're given makes the movie seem dumber than no explanation at all would.  (This is especially when it's paired with flashbacks that turn Red's words into some very wacky visuals that it's more-or-less impossible to take seriously.)  So sometimes Peele's world of symbol works, especially in a great final frame; mostly it doesn't.  But at least he jazzes up Red's slo-mo lecture and subsequent denouement with a score-driven fight sequence, some clumsy but momentum-building cross-cutting through time, and the sickest deployment of a split-diopter lens since Brian De Palma was regularly making movies.

So if there's one saving grace to Us, and there really isn't, but if there were, it would be that Peele has applied a pretty robust visual scheme to it.  For all that Us is a big step down from Get Out in almost every other way, it demonstrates more of a love for photography than the movie about the photographer.  Besides that delirious split diopter, there's a standout piece of camerawork that hides an enemy in plain sight, operating more-or-less as a response to the emergence of that Thuggee assassin from out of the painting in Temple of Doom—and it maybe even beats it, because Peele and DP Mike Gioulakis do theirs in broad daylight, a brilliant little piece of focal control that brings a lurking monster who was always there into view, like magic.  Now, as for how the characters didn't see it, that's another question entirely, just not one I'm especially interested in.

But Us is well-shot thing all the way through; even when I had no engagement with it as a story being told, and even when the basic cutting of it doesn't let you enjoy its thrill sequences, it's still always interesting to look at in any given frame.  The downside is, this is sometimes more in an academic sense.  It's the kind of thing I don't think I ought to talk about without a better grasp of cinematography of my own, along with maybe the proverbial black friend I don't have, but there's something about the way that Peele reverses the (mostly positive, sometimes Black Panther) trend of brightening in black films.  He does this for his film's very specific purposes, deliberately and carefully plunging his less-refractive subjects into sheets of well-chosen darkness, and when Us is still capable of being scary, it's Peele and Gioulakis' decisions that do the work of it.

Hence, it's a shame about that mangled tone and mishandled premise.  I was never the biggest Get Out fan, but while it's a movie whose reach exceeded its grasp, you can accept what it's driving at even if it drives at some points in weird ways.  Now we have Us, and Us perhaps has even more ambition; but whatever Peele is driving at here is damn-near opaque.  It's a film about a literal underclass and their protest that is explicitly terrified by both.  Maybe the key is in that twist ending—though Us isn't worth doing the work of unlocking whatever its "actual" meaning is, and I suspect that my initial reaction of it being a twist for its own sake, and one that simply doesn't have the significance that I think Peele wants to attach to it, is, justifiably, the one that's going to stick for me.  The film's detractors have wasted no time in comparing Peele to Shyamlan.  But surely that's unfair: Shyamalan made two great movies before he lost his touch, not none.