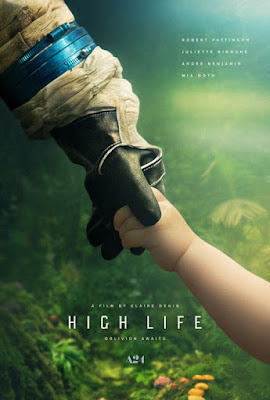 One of the first lines of dialogue in High Life is Monte (Robert Pattinson) explaining to his infant, almost preverbal daughter the meaning of the word "taboo."  Once we fully process that they're alone together, flying into oblivion astride a rocket that's been shot into a black hole for reasons, it just about gives the game away, and if we haven't figured it out early, there's a moment halfway through, representing a rather significant leap forward in time, that should make it as plain as a slap to the face.  After that, most of the rest of the film is an exercise in the audience waiting (and waiting) for Claire Denis to simply get the fuck on with it.  High Life more-or-less starts with this little lecture—the intended recipient of which seems to be the theatrical audience more than the baby—because Denis is convinced her film is edgy and shocking and perhaps brave.

It isn't, really.  It is merely upsetting and very hard to sit through and gross.  A brave film doesn't end by repurposing 2001: A Space Odyssey's stargate sequence (on a budget) as a winky ellipsis.  A brave film creates its scenario then seeks to understand it; basically, it makes an effort.  And the brave film that's hinted at by this film is barely in here, swallowed up inside that cut that crosses thirteen or fourteen years.  A potentially very interesting and genuinely unnerving movie starts right at that moment.  But that potentially interesting movie has been shoved out the way for what amounts to a Nazisploitation porno, only conceived with the content and tenor of one of the ethereal 70s sci-fi flicks that arrived in 2001's wake, like Silent Running or Phase IV.  (Yes, I know that sounds kind of good.  I mean, hell, I did go to see it, didn't I?)  I'll cop to an ignorance of the auteur here.  I have to assume Denis is a celebrated filmmaker for better reasons than High Life gives; I have to, as an act of faith.  I'm sure her other works (this is her first SF film) are not sloppy, juvenile scribblings.

But sloppy and juvenile is what we get here.  Astonishing that Denis is 73.  Actually, maybe it's not.  Anyway, as High Life throws itself back upon its semi-justified nonlinearity in order to explain how we got to its beginning, we learn that before he was a father, our Monte was a killer, shot into space along with a number of other co-ed convicts, like Tcherny (André Benjamin, né 3000, the only being in this film who registers even slightly as "an actual human person") and Boyse (played by Mia Goth and, as attested by more than one line of dialogue that clearly wasn't changed when the 90 pound actor was hired, Mia Goth's "big booty").  The most important of these prisoners, though, is Dr. Dibs (Juliette Binoche), who has, in a not-entirely-clear fashion, seized control of the ship and begun to subject her fellow inmates to dire sexual experimentation, mediated by the fuckbox through which she drains precious bodily fluids, her ultimate goal being the breeding of new humans, and then... well, the movie does not tell us, because High Life is populated by symbols and arguments about the nature of humanity, rather than people, and "breeding" needs to be pretty much an end in itself.

It's not wholly unsuccessful at being a symbolic work, to be fair, and honestly that's the best, maybe only reason why it's anything above a no-stars thumbs-down crime against art; High Life is easily read and this redounds very slightly to its favor.  (Meanwhile, anyone insisting that it's particularly dense might be themselves.)  It's about the biological basis of humanity being more or less the whole show, and it's a ride that ends with extinction in the long run.  That's a thesis, at least, though High Life is so adolescently nihilistic about it, almost never bringing anything to the table to prove it besides inflicting various kinds of misery on its audience, whether that be offering us the sheer tedium of watching its "characters" or forcing us through so many rapes in a single ten minute span that you might need a scorecard to keep track.  It's probably not what people mean when they say women's perspectives are necessary for certain stories, since it's almost certainly the most reactionary and biologically essentialist thing you'll see critics raving about this year.  Well, it is French, ain't it?  Hence a baby's vagina, conspicuously framed into shots with enough justified portent that makes it even more unpleasant than it would be if Denis were just tweaking us squares.  Not French enough for you?  Try on that first rape for size.  Long and extremely violent, High Life doesn't come close to earning the right to depict it with such luridity; it's committed by one cipher upon another, and this provocation is narratively extraneous, here for no other reason than to make your stomach churn and, I suppose, consider the fallen nature of Man.  High Life is perverse in more than just content of course: what could be more perverse than a film that's two-thirds about an insane woman engaged in mad fuck science on board a spaceship on a one way trip into a black hole, and one-third about that other thing, yet is nevertheless, somehow, still chew-your-leg-off boring?

At one point in its production, the film boasted novelists Zadie Smith and Nick Laird as screenwriters.  Lost to "creative differences," it's never been clearer which side initiated the separation.  Their absence perhaps partway explains why the dialogue seems either Google Translated from Denis and co-writer Jean-Pol Fargeau's French, or else punched up by Tommy Wiseau in his.  Pattinson's intermittent narration, while revolving mostly around fanciful sci-fi shit and his stoicism regarding his steadfast denial of essence, at least manages to be bad writing, rather than wildly bad writing.  The dialogue does not fare nearly so well: "Am I pretty?" "You have rat's teeth."  "Rats are very intelligent animals."; "Fuck your baby mission!"; "the black ones always die first in space"; and, of course, the various aforementioned references to Goth's "big booty."  Even the title deals in an inapt choice of words.  High Life's a movie where Cheech & Chong win the lottery, not yet another tiresome art film where we have to pretend Robert Pattinson has Ryan Gosling's ability to stare into the abyss and command the screen regardless, rather than just a checkered teenybopping career he wants to atone for plus a dull-witted American accent.  (Somewhat hilariously amidst all High Life's sourpussed mordancy, Monte's daughter, taught to speak pretty much exclusively by this "American," winds up British after all.  I guess it's genetic.)

The compensations, besides being easy-to-read, are almost exclusively visual.  As long as it's in space, it's moodily shot, sometimes almost moody enough to overcome the absence of anything else.  (When it flashes back to Earth, it looks like total garbage, presumably intentionally; it's not a compliment).  And, occasionally, Denis finds images that truly do stick to the mind, even if you intellectually object to them (the title drop looks cool as hell, but why'd Monte put space suits on people he's throwing out an airlock?).  The fuckbox is a prime example, and a vivid scene.  It's been presaged by literally hundreds of hours of pornography, premised on the same basic imagery and technological concepts, but it at least has the verve of a real filmmaker interested in capturing subjective emotional states (if not clitoral orgasms, so far as I could tell).  The 2001 homage is, on its merits, swell.  On the other hand, I'm fairly convinced that the movie only exists because Denis saw in her mind's eye the black hole she brought to the screen, which, with its accretion disk, bears a remarkable resemblance to a dark vision of sperm fertilizing an egg, i.e., the only thing men are good for (whereas women are only around to be obsessed with the actual babies that result).

It has panache as a single shot, but it's kind of a thin reed to hang a whole two hours on.  Thinner still is production design that would look cheap and threadbare for a Poverty Row Z-movie from 1957; somebody might be able to appreciate it as a conscious throwback, but not this body.  (The film's earned its comparison to Alien for its themes, I assume—needless to say, they are played out more artfully there—but, as I would damn well hope, neither its overall craft nor its pace.)  So, evidently, I can't even say nice things about the film for more than two or three sentences in a row.  High Life is ambitious, you say; I might begrudgingly accept that, for the sake of argument.  Most of the film is lazy as hell, constructed of stock sex torture and stock space crap, unwilling to engage in any but the most superficial ways with its actual main tensions, but whatever—it's ambitious.  Fine.  Film people really need to get it through their thick, stubborn heads: ambition isn't quality.  Ambition countenances the possibility of total fucking failure, and sometimes total fucking failure actually is the result.  It's the kind of movie that puts one in the mood to sit through three hours of Avengers: Endgame, because you at least know a movie like that cares about you.