This boy's too young to be singing the blues 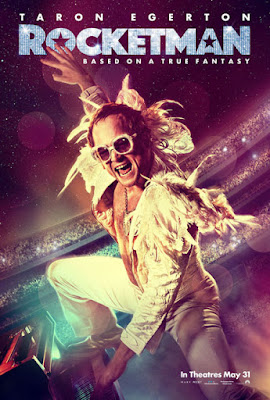 It absolutely surpasses Egerton and John's last collaboration, but then, "being better than Kingsman: The Golden Circle" isn't much of an accomplishment.  So, happily, let's say that Rocketman is still good—even if, unlike the subject of its story, it whiffs it hard on the actual greatness. 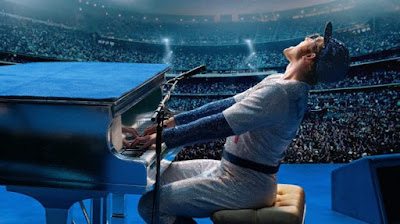 Rocketman is, perhaps, not actually that good.  For the most part, all its real pleasures are just what they usually are in jukebox musicals—that is, pleasures that could be more easily replicated on headphones.  Still, to its credit, it does make a conscious and aggressive effort to justify being a movie, instead of being a greatest hits album by a cover act, who, for some annoying reason, have savagely truncated every single track and left the best one off entirely.  True, Rocketman's effort isn't always rewarded, and sometimes that effort is straight-up inept, but it is always there, and it's appreciated, bringing it much closer to something like Tommy (fairly enough), or Mahler, than the last film that director Dexter Fletcher had anything to do with, namely 2018's Best Picture-nominated bête noire (one of them, anyway), Bohemian Rhampsody.  And that's what, theoretically, makes it so amazing; or, rather, that's what everyone tells me.  I liked it, anyway, but I also wonder if avoiding Bohemian Rhapsody made me less likely to need it.

There is a touch of the Ken Russell freakout about it, I guess, though less than you'd prefer considering its subject, a certain Sir Elton John (Taron Egerton), né Reginald Dwight (as a small child Matthew Illesley, and as a tween Kit Connor).  In part, you'd like more freakout because there's not much else that Rocketman's got: Lee Hall's screenplay provides a structurally basic—incredibly so, really—biopic box for the film to exist in, covering the span from Elton's almost-comically loveless childhood up through his cocaine-and-sundries-addled downfall, with several stops along the way, wherein Elton makes the acquaintance of his good angel, songwriting partner Bernie Taupin (Jamie Bell), as well as his bad angel, Satan.  Or at least that aspect of Satan who managed rock stars during the 1970s under the name John Reid (Richard Madden).

It piques me to discover that the latter role was evidently played in Bohemian Rhapsody by GoT co-star Aidan Gillen, and while Madden is certainly quite fine as a force of cruel, capitalistic sexuality, and perhaps to most tastes a hotter piece of man-meat, I almost wish they'd leaned a little more on the Nick Furiousness of this Lord of Rock and Roll Sodom, and casting Gillen would've been a sound idea on the basis of his cartoonishly-fun Littlefinger voice alone.  It would've fit in perfectly against Elton's father, played by Steven Mackintosh as the dad from The Wall—that is, the dead one, and while this one's technically still alive the main distinction is that his absence in his son's life comes with angry sighing, and, in a latecoming scene that's so bluntly sad it's actually funny, it's apparently just Elton he hates, amongst his several children.  It would fit in with Elton's mother, too, played by Bryce Dallas Howard with accent coaching by Dick Van Dyke as a woman so obviously considering an abortion throughout the film, even when Elton is a grown man, that it also can't help but be sort of tragicomically hilarious.  Also hilarious, but not in any way that helps the film: the way Howard ages, via a half-pound of makeup, thirty full years in the space of one cut toward the end—despite us having seen more or less every intervening year since the beginning.  Yeah, that part's "epilogue of Harry Potter and the Deathly Hallows, Part II" bad.

What I hope is clear from that disquietingly-long digression, however, is that Rocketman is concerned with this poor lad's emotional journey, vastly more than it is Elton John's history, and on this count it at least has a more solid foundation as a story than the "this guy made the music you like" brand of rock biopic.  The story is still, "Elton felt unloved, because he apparently was, and tried to fill the void inside him by making the music you like, and also by making in-retrospect poor decisions about sex and drugs," which isn't reinventing the wheel, either, but Rocketman has the idea, if not always the execution, to take this to a place as close to a bona fide rock opera as a jukebox musical can get, using Elton and Bernie's songs to explicate the feelings of isolation and alienation that, cinematically enough, find themselves expressed as hallucinatory setpieces and, of course, in Elton's crowd-pleasing, (over?)compensating glam-camp stage persona.

At least one of those setpieces ("Bennie and the Jets") does channel that old Russell energy, by way of a crimson-lit orgiastic hellscape that, honestly, looks pretty fun (not that it shouldn't look fun, even if Elton himself isn't having any, because the whole point is that outside of brief illusory moments of happiness, Elton never gets to have fun at all until he realizes that music is good, and drugs are bad—incidentally, while it's very good that this movie isn't particularly skittish about Elton's sexuality, when I say "Ken Russell," I mean that in an attenuated way, and I have no idea why it's rated R).  A couple of times, it even channels Arthur Freed and Vincent Minelli (the choreographed splendor of "Saturday Night's Alright For Fighting" and the lavish wealth/seduction montage of "Take Me to the Pilot").  Meanwhile, chronology is all but shattered, and the best and perhaps only sense you get of the passage of time is bound to the sad retreat of Elton's hairline.

But despite that, the whole film is operating under a pair of handicaps.  The first, and it's probably less of a handicap, is that it's a crapshoot whether any given John/Taupin song actually fits the story or not, which isn't a big surprise, though they probably never had to be this random.  The very opening, "The Bitch Is Back," appears to have been selected either because it mentions "when [he] was five," or simply because it's (putatively) enjoyable to hear a child say "bitch."  Speaking of Russell, "Pinball Wizard" winds up serving miscellaneous costume duty (admittedly a necessity!) during a vertiginous spinning montage.  Doubtless, that's because Tommy gave us a rad cinematic version of "Pinball Wizard" decades ago—but the downside is that it's entirely meaningless here, even when it could easily have been retrofitted to underline young Elton's precocity with the piano, which is demonstrated to have been close enough to playing by sense of smell.  "Tiny Dancer" serves as a paean to Elton's unrequitable attraction to his (straight) songwriter, and gets the basic feeling across well while still being kind of lyrically vapid in context.  Likewise, many of Elton's greatest hits are crumpled up and abandoned all at once inside a "depressing song" collage, which is grist for a (good) joke, but also means this sad movie arguably doesn't have enough of the sad songs that say so much.  Needless to say at all, the lack of "Someone Saved My Life Tonight" is tantamount to criminal fucking negligence.

The second handicap is that the songs are cut, not quite to ribbons, but noticeably enough to be annoying, sometimes very much so: the somehow even-more-melancholy reorchestraion of "Rocket Man" is the blatant centerpiece (hell, title piece) of the film, and one of the few songs that really perfectly furthers its emotional goals.  (Well, the abandonment of its Martian imagery in favor of a watery suicide attempt notwithstanding.)  And it could have made me cry, if only Fletcher let me drown in that swimming pool with Elton for thirty or even twenty seconds longer.  But it rises too fast and despite some nice choreography involving an ambulance ride—not something to be overlooked, I suppose, "nice choreography involving an ambulance ride"—it doesn't hit as hard as it possibly could.  And, while it's not exactly a third strike against it, per se, Rocketman is very much not choreographed enough: "Saturday Night's Alright For Fighting," coming early on, dramatically oversells the complexity of the setpieces yet to come.  Another semi-serious problem is that Rocketman does not give a shit about Elton or Bernie's process, nor the enormous care and artistry that went into Elton's stage presence: according to this film, Bernie just wrote free verse that Elton did everything to turn into music, whilst Elton started spontaneously generating elaborate sunglasses one day as an evolutionary defense mechanism.

The silver lining—or just "a" silver lining, since the film certainly has many fine points, but this is the best one—is that Egerton sings very well.  This is the most important thing Egerton does, but not the only thing, and he offers, both singing and speaking, a damned good performance that doesn't ever feel like it stops at a mere impression of Elton John, always concerned instead with his Elton John's hollowness and his increasingly desperate pleas for affection.  He's even good in the group therapy framing sequence that keeps bullying its unwanted way into the film.  (Way more of an obstacle to the story's flow than it is a pathfinder for it, it even gives up the ghost of its defensive unreliable narration in between appearances, as if Hall forgot that's what his framing device was evidently for.)  And if you got rid of all of it but the beginning and end, you'd have room for more and longer actual songs.  I'm just saying.  So as long as I'm remaking the film from scratch, perhaps just get rid of the child Eltons, too.  Let Egerton play young Reg, at least during the songs; it would underline his subjectivity even more and, incidentally, it would let a capable, likeable singer sing them.

The one-clause review is that Rocketman's a movie that lives or dies by its musical numbers; and, as we've seen, they're not exclusively successful.  But it's a movie that tends to just die in anything that isn't a musical number, too, though at least these stretches have the decency to be less frequent than they could be: Egerton retains his magnetism even at Rocketman's worst, and Bell is strong too—others, less so—but it can be an astonishingly poorly-made motion picture when it's time for a dialogue scene, which Fletcher apparently can't film regardless of how dreadfully simple they are, and therefore has to string them together with barely-functional cuts.  There's a sublimely bad moment where the thirty degree rule's violated during a jump from one shot of Elton and Bernie at a table, zooming in, to another, slightly-farther shot of Elton and Bernie, zooming out.  And there are merely prosaically bad moments, as well, like the eight jittery shots that comprise Bernie's gift of "Your Song" at a breakfast at Elton's, when one would've done just fine.  Of course, the worst moment of all is one of the cringiest "how they all ended up" montages to ever disgrace the end of a biopic, though I chalk this up to John as one of the prime movers behind the film, and his desire for it to burnish his legacy a little, and since he was gracious enough to allow Rocketman's humane, kind-of-unflattering portrayal of his life go forward, it's hard to be too mad at him for wanting to assure us that the balance of his time on this Earth has been a loved and productive one.

But, yeah, it has a lot of weaknesses.  And yet: I've not been able to get "Goodbye Yellow Brick Road," given pride of place as the strongest motif of Rocketman's underscoring, out of my head ever since I saw it two weeks ago.  That's a testament to Elton John and Bernie Taupin, mostly, but generously, we can say it's a testament to Rocketman, too.