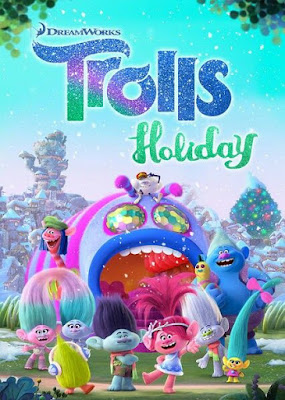 If one's thesis is "over the past three years, DreamWorks has been the most reliable source of quality in American animation," then one would be well-disposed to consider their television work, because, if anything, DWA TV has been even more reliable than their feature animation wing, especially in the field of children's cartoons that are actually aimed at childish adults like yours truly, in the hopes of filling that Adventure Time void.  In pursuit of this goal, DWA TV has managed better Star Wars than the people who own Star Wars, in the form of their 80s revival shows, Lauren Montgomery and Joaquim Dos Santos' Voltron: Legendary Defender and Noelle Stevenson's She-Ra and the Princesses of Power.  And that's an irony that DWA founder and Disney nemesis Jeffrey Katzenberg would surely be able to appreciate, at least had he not recently suffered an undiagnosed stroke that robbed him of all his mental faculties.  Anyway, DWA TV's also managed a decent not-even-trying-to-hide-it Adventure Time rip-off, with Kipo and the Age of Wonderbeasts.

It's worth pointing all this out, mainly because I never have an opportunity to even briefly talk about TV, but it's also a little disingenuous: those series are predominantly the result of the efforts of semi-independent producers and Korean "traditional" animation studios Mir (Voltron, Kipo) and NE4U (She-Ra), and it's entirely possible that the net effect of DWA Glendale's oversight on those shows has been a negative one.  Still, on the occasion of Thanksgiving 2017, the Glendale hub did produce one thing in-house for television that I'm not sure I would trade for any of the above, a 26 minute jewel of insanity and inspired comic insipidity called "Trolls Holiday," a follow-up/brand-extension for their successful Trolls feature from 2016.

"Holiday" picks up some indeterminate time after Trolls concluded with its DreamWorks dance party par excellence, which restored peace to the Troll village, and which also brought the possibility of happiness to the formerly-Troll-munching denizens of Bergentown for the first time.  That possibility has remained largely notional, however, as discovered by Poppy (Anna Kendrick), previously princess and now queen of the Trolls, when she realizes that the Bergen monarchs Bridget (Zooey Deschanel) and Gristle (Christopher Mintz-Plasse) have been responding for months to the (daily) handmade holiday cards she's been sending them with plain-jane cards marked "Monday," "Tuesday," "Wednesday," and so forth.  Recognizing that the Bergens have no holidays to call their own (especially now that they've stopped eating Trolls on their sole previously-existing holiday, Trollstice, and, no, one should not expect much discussion of historical justice in this sequel to a movie about talking dolls), Poppy determines that the solution to the Bergens' bland weekdays is to give them one of the Trolls' holidays, since they have at least 365 of them, and quite probably more.  To this end, and despite the vague misgivings of Branch (Justin Timberlake), who learned how to be happy in the feature film and is still somewhat uncomfortable with it, Poppy and her pals go on a mission to the Bergens to offer them a dazzling array of holidays to choose from, as presented in the form of a musical stage production, which, as Branch feared, goes immediately awry and leaves a rift between Poppy and a very annoyed Bridget.

For all that I treasure the Trolls feature, this short has the advantage of it by far: it requires almost no plot, and instead is permitted to boil the concept down to its essence and leaves nothing but what was great about Trolls, namely the aesthetic and conceptual world-building of a society of psychotically happy weirdos who live inside a touchable arts-and-crafts-based fantasyland that, for all we can tell, was designed by a highly creative six year-old girl who loves colors, felt, and approachable pop music, and whose medication regime may need a little rebalancing.  It is, as a result, wall-to-wall spectacular, and makes explicit what was only strongly implied in the original film, that these things are also a gentle and loving but still fairly-pointed satire of a strain of Western culture that demands the utmost positivity and participation at all times, regardless of how you actually feel.  To this end, it provides more character development for Poppy than her whole feature did, casting her as the antagonist and giving her the chance to recognize that her brand of aggressive singing, dancing, and hugging can be, when left unchecked, selfish and even harmful.

That's a great moral, but more importantly it is also extremely funny before she finally learns her lesson, and it's the purest silly pleasure to watch her reign of happy terror play out amidst rapid-fire musical, physical, and animation gags as she and her equally-monomaniacal friends demonstrate so many stupid, absurd, lame, and baseless Troll holidays, in such a short span, that it's impossible to keep count—amazingly, you get the impression that not only could the boundlessly-energetic Trolls keep this up forever, so could writers Josh Bycel and Jonathan Fener—but one could probably come up with a solid estimate simply by keeping track of the number of times their playlets' special effects wind up resulting in increasingly-severe eye-based injuries to King Gristle.

And that's what I interpret as a fine little deliberate metaphor for "Holiday" as a whole, for while it might've been intended as time-filler by DWA's parent company NBCUniversal, there is not a hint that this was intended by the filmmakers as anything short of a striving work of borderline-experimental animation.  (Compare and contrast WDAS's big 2017 holiday special, featuring Olaf the Snowman, which can't even be as good as Frozen.)  In fact, "Holiday" is probably the most sustained experiment in DreamWorks history, which really is saying something inasmuch as DWA has been pushing the envelope in several directions for the past half-decade, in both abstracted, "flat" CGI (Kung Fu Panda 3, The Boss Baby) and in hyperreal lighting effects, by way of their their MoonRay rendering tool (How to Train Your Dragon: The Hidden World, Abominable).  "Trolls Holiday," while also building on the tactile texturing and "mixed media" work that was such a big reason that Trolls is so adorable, is their surrealist film. Trolls already took frequent recourse to overstimulating nonsense; "Holiday" takes it beyond any reasonable limit, and concentrates it all into 26 minutes that are nothing but the fizziest, most hyperactive animated sugar-high imaginable.

In fact, one of its first gestures is to get almost literally high, beginning with a bizarre trip through a "wormhole"—a hole made by an actual worm, yet still possessing the trippy properties of a space portal as imagined by 2001: A Space Odyssey and its overheated rip-offs—which it does, also, in the midst of a rendition of "Love Train" and a simultaneous homage to the catbus in My Neighbor Totoro.  It's here that reality caves in, revealing the substrate of what we're watching, that is, plastic Troll dolls and a laughing cloud made of cotton balls and pipe cleaners.  It's mind-bending in its pleasant kid cartoon way, and it still doesn't reach the levels of sheer visual assault of Poppy's holiday presentation, which rapidly detaches itself from any reality whatsoever in an endless puree of music video tropes that continues Trolls' tradition of lightly parodying dumb fun pop music by putting it in the mouths of toys who are expressly incapable of emotional sophistication.  Meanwhile, one of its enduring pleasures is how, like Trolls, it revels in the small details as much as the broad comedic strokes.  Yet, again, its narrowed scope and runtime marks a significant improvement over its predecessor, and director Joel Crawford (whom I hope we hear a lot more from in the future) does a heroic job jam-packing his film with constant overload: I don't think there's a single frame here that's devoid of a joke or at least some compelling detail, even when it wasn't necessary and even when I doubt you'd notice on a single viewing, e.g., when the "Hug Time" alarm rings, and in the corner of the screen you can see that the shiny glitter Troll, Guy Diamond (Kunal Nayyar), has narcissistically preferred to hug himself (possibly explaining the origin of his offspring in the feature sequel); or the way that, while moving, the caterpillar bus's floor undulates in the most disturbing fashion.

It's just altogether glorious, and reflective of the joy that should be inherent to making animation but sometimes/often isn't, and while in theory it's like a great many things (simple moral lessons relayed to children by characters who are literally merchandise), in execution it's like nothing else whatsoever, even the LEGO films that it more-than-superficially resembles, and arguably even its theatrical predecessor.  If the Trolls' first feature were already akin to a work of family animation that had been dosed with MDMA, then "Trolls Holiday" adds PCP and LSD to the mix, and soon winds up barfing glitter all over your face.  If I've often called the 2010s a new Golden Age of Animation, then "Trolls Holiday" is one of the reasons why: it's one of the great triumphs of the medium of CGI cartooning on a purely formal level, and that's before you even get to how freaking hilarious it is.