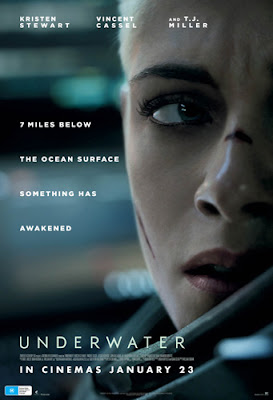 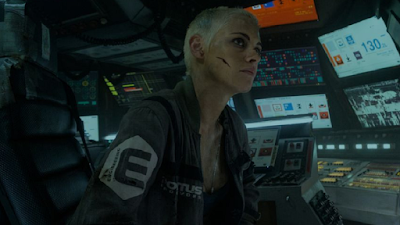 James Cameron's an influential figure.  Certainly, one need not belabor the salutary effect that Avatar had on big studio spectacle throughout the 2010s.  Even Titanic had imitators.  But he was never more apt to be straight-up copied than in the 1980s, because, back then, it was still considered possible to copy Cameron without committing the GDP of a small country to the cause.  And so there have been more rip-offs of The Terminator and Aliens than one could count, and, usually, they don't even try to hide it.  Hell, it's usually a selling point.  But as for Cameron's other big 80s film, there have never been that many rip-offs of The Abyss.  Of the comparatively few that were made, virtually every last one of them—Deepstar Six, Leviathan, Lords of the Deep, all in a row—came out before The Abyss, not after it.  (Throw in The Little Mermaid and 1989 is the biggest year for undersea fantasy in cinema history.)  Each a deliberate attempt to beat Cameron's presumed undersea blockbuster to the punch, none really wound up tracking the plot of The Abyss (it's obvious that they assumed it would be like Terminator and Aliens and it might not have even occurred to them it would be more like The Day the Earth Stood Still mixed up with Close Encounters of the Third Kind); and, as The Abyss was not actually a blockbuster in any robust sense of that term, and it never even threatened to be the same kind of phenomenon that its predecessors had been, the rip-offs, pardon the pun, dried up almost instantly.  As far as I know (and maybe I'm missing something, but I'm rolling here), there had not been a proper "Abyss rip-off" released since 1990, and I don't think Sphere counts.

Had not been.  Now there is, and while most reviews manage to acknowledge Underwater's very large and very blatant debt, they have not, as a rule, emphasized what an odd species of rip-off it actually is, because, beyond the setting and general scenario, Underwater has been designed to be as much of a deliberate anti-Abyss as possible.  In almost every single way it could, where The Abyss zigs, Underwater zags, like the process used by its screenwriter Brian Duffield, its script doctor Adam Cozad, and its director William Eubank was to make a checklist of every single thing that The Abyss does, and then make sure Underwater did the opposite.

As much as I love The Abyss, and I do—it's my second favorite Cameron film—this is probably also my favorite thing about its 2020 reimagination, which otherwise has a lot of problems, and of course "doing the opposite of The Abyss" is, in a sense, one of them.  For starters, it means that, overall, what you'll be left with is a somewhat doofy underwater creature feature rather than, you know, a emotionally-pulverizing plea for love rather than war.  But then, it's not like I'm not the target audience for that sort of thing, too.

So Underwater—and I think we can all agree that's a pretty lame title—takes us down to the bottom of the Marianas Trench to one of Tian Enterprises' advanced drilling rigs, and we get some massively terrible voiceover narration (fortunately, this is the last of it for a while; less fortunately, it bookends the film) from Kristen Stewart, who plays our heroine, Norah Price, though in its first zag, Underwater is the kind of movie that is largely unconcerned with whether you learn characters' names, as opposed to referring to them as "Vincent Cassell" or "T.J. Miller" or "that guy," insofar as maybe seventy seconds elapse before Norah notices a leak, which cascades into a full-on collapse of most of the rig within the next ten or twenty.  By the ten minute mark, Norah's gathered up the very few survivors of the initial disaster—Rodrigo (Mamoudou Athie), Paul (Miller), Capt. Lucien (Cassell), Emily (Jessica Henwick), and Liam (John Gallagher Jr.)—and they've made a desperate plan to walk across the trench floor to another nearby facility in hopes that their escape pods still work.  This is a bad plan, but it's what they have, and it starts to go awry almost immediately—I may have ordered the cast list in that way for a reason—but making matters even worse is that the earthquake their drilling occasioned has brought something up from below the bottom of the ocean, and this something absolutely hates them.

So the opposite of The Abyss in the broad strokes of its plot: a deep-sea rig disaster puts our heroes face-to-face with underwater aliens, except reconstructed as a horror movie.  It's also the opposite of The Abyss in structure: abandoning the epic scope of Cameron's film in favor of a paring down of everything human in the film to pure survival experience and immediate, simplistic emotions.  And then it starts in on being the opposite of The Abyss in weird, petty ways, like the goofball with the pet animal is turned into the goofball with a stuffed animal instead.  (Did you guess this is the T.J. Miller character?  Yes, of course you did.)  It's also the opposite in aesthetic, with the stately classicism of The Abyss, both in terms of its filmmaking and its screenplay, replaced with a constant stream of visual chaos, extremely unclear geography, and storytelling that starts testing the boundary of total incoherence almost immediately once we've gotten past the very basic idea, "we walk to the next rig and hope we don't die drying."

I don't necessarily mean the latter as a negative, though it winds up being one.  (On a technical note, it does not help that Amazon has no business selling their heavily-compressed streaming copy as "HD," which turns Underwater's near-constant imagery of lights floating in an inky dark into a study in data compression and concentric rings of gray.  I imagine in a more pristine format, Underwater is still very murky, but, like, pleasing; it was shot by Bojan Bazelli, the occasionally-great cinematogpher who shot The Ring.)  Anyway, where it becomes a problem is that Underwater has to fulfill two purposes that might not seem distinct at first glance, but turn out to have fairly different requirements.  The first is to be an experiential thriller about the destruction of a deep-sea rig, and this really only benefits from Eubanks' half-drunk direction.  Underwater throws us immediately into the situation with no set-up and barely any sense of who's what or what's where, and this is good, because this situates you, roughly but quite effectively, into the same psychological state as the characters, and it doesn't really matter what this pile of debris is or what that tangle of wires does.

The second purpose, however, is to be a horror movie about rad underwater monsters, and this purpose is, at every turn, undermined by the visual chaos, because while the adrenal thrills of the disaster movie phase of Underwater can be achieved with a combination of jagged editing, loud noises, and the tendency to lean on close-ups of the actors' wheezing anxiety rather than any other kind of shot, the horror movie inside the disaster movie wants desperately for some measure of suspense and dread.  "Suspense and dread" isn't even a thought that Underwater has until a scene very late in the film which is so visually unreadable that it would never even occur to you actually feel any suspense over it, unless you'd read about the film and knew more-or-less how it ended.  Which I even had, and it still didn't work.  (Conceptually, it's pretty fantastic, essentially "what if The Abyss was Aliens, but, also, a prequel to Pacific Rim?  In execution, less so, though it has its moments.)

I still think, on balance, it's a diverting theme-park dark-ride, but on the minus side, that's all it ever is.  There are bits and pieces that feel like they belong in a more soulful movie—Marco Beltrami and Brandon Roberts' electronic score clearly wants to do some interesting, thoughtful things with mood, but Eubanks is largely unwilling to throttle his movie down, so there's roughly one minute in the whole film where they achieve this goal.  There are other bits and pieces that feel like they came from a more complete narrative, including Stewart's performance, which is a shockingly investing pile of nerves and grit for such a sketchy figure; I might add Miller to this, persona non grata though he is (it's one of the tells that Underwater sat on a shelf at Fox for a couple of years), because, while it depends heavily on whether you actually like Miller's comic relief stylings (I generally have), it's a very strange energy to put into this movie of all movies, and gives it the unsettling sensation of a real, proper, two-hour Abyss rip-off that's had every single atom of connective tissue removed, leaving only the impressionistic meditation on crushing tons of water and evil humanoids from the deep.  (Which is, if I'm being honest, my biggest gripe with Underwater: the creature design is kind of fucking awful.  The mainstay monsters are a fairly unappealing cross between a Dementor and a scary sloth, and God knows why they have humanoid body plans at six miles down.)  Then there's the whole notion that one wears diving suits in one's underwear, which I think is less an attempt to sexily exploit Stewart and Henwick's lower bodies (or to humorously exploit Miller's), than it is an odd go at somehow making a feature-length homage to the last scene of Alien.

It has the decency, nonetheless, to end well, and at the risk of being real damn repetitive, when it ends it pursues its anti-Abyss logic with such commitment and purity that, for a brief moment, I loved this movie.  (Its epilogue, on the other hand, is the kind of cynicism that wheels back around to dumb.  I laughed out loud at the idea that Tian Enterprises would cover this disaster up—I mean, if BP could blame Deepwater Horizon on Godzilla, don't you think they would?)

Altogether, it didn't deserve any fate particularly better than the one it got.  It cost $80 million—and that's a quandary, because yeah, in quantitative terms, it looks like it cost $80 million, but it's also a reminder that, even in 2020, $80 million does not buy especially good compositing, rendering, or lighting in any individual CG shot when you have, like, seven hundred of them.  Anyway, it made about half that in theaters, and even that's kind of not too bad, considering it's more-or-less the definition of a "VOD movie."  It's a big step up for Eubank, to be fair; I should point out that, in being basically functional, it's a genuinely massive improvement over his first film, The Signal, though by the same token, I'll probably remember how Goddamn stupid and broken The Signal is for the rest of my life.  I liked Underwater much more, but I might not remember it for the rest of the month.