I killed a man who I hated today 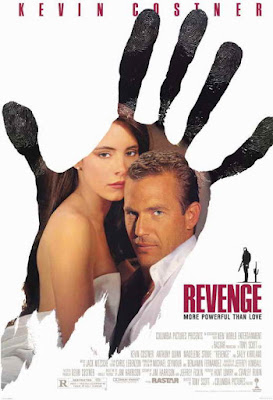 Tony Scott's fourth feature, Revenge, broke new ground for the director: it's bad.  It's not very bad, and basically none of it is Scott's fault, but it starts leaking energy at about the time a movie called Revenge should be ramping up, and it ends on a pair of sour notes, either one of which would probably consign it to the outer dark if all you cared about was a movie's politics (and as much as I old-man complain, I do care, it's just not literally the only lens through which I view art), but just as importantly they're symptomatic of a narrative that simply isn't functioning properly anyway.  Plus, while it's a minor point, and maybe I wouldn't mind if the film's title weren't so unappealingly blunt and bland, but it's not actually much of a movie about Revenge.  Our hero's overriding motive, in fact, is "rescue," and "revenge" merely pops up from time to time as a nice bonus, or because nothing violent has happened recently.
But that was the name Jim Harrison went with for his 1979 novella, and so that was the name they were bound to as its film adaptation wound its way through a decade of torturous development.  It was one of those things that apparently really stuck to some people, and amongst that number was Kevin Costner, whose influence (as executive producer, no less) was what saw it through.  Harrison himself wrote the screenplay, and while Jeffrey Alan Fiskin finessed it, Harrison was deeply gratified by the final product's fidelity.  Old Hollywood grandee John Huston had been on and off the project for years, and appears not to have liked the ending any more than I do: he oversaw, by his count, a dozen attempts to change it (and ultimately something changed, for one aspect of the ending we got simply could not have existed in 1979, and probably no earlier than 1984).  But it was Costner's involvement that finally put paid to that director's involvement, and the charitable interpretation of events is that Huston could not match Costner's faith in the material; the uncharitable interpretation is that Huston had no interest in having Costner as his lead actor under any circumstances.  I've always preferred to withhold judgment on Costner—maybe just because I got sick of "Costner can't act" jokes before I was old enough to drive—but it is a performance that sometimes prompts the question, "Is Kevin Costner a good actor?"  That brings us to Scott, riding incredibly high after two megahits that confirmed Tom Cruise and Eddie Murphy as not just stars but icons.  Now he was to give Costner a monumental hit of his own, and this didn't work out.  It was probably more important for Scott than for Costner: as with Beverly Hills Cop II before it, Revenge echoes in Scott's filmography going forward.
Either way, Scott makes himself known pretty much immediately, for our hero, Jay Cochran (Costner), is a naval aviator and Scott makes the unwholesome choice to remind you of a better movie before a worse one's even had much of a chance to begin, with an F-14 flyby courtesy of the friends Scott made on Top Gun.  The F-14 is the first thing we see, but in cross-cutting between Cochran's boisterous last flight for the U.S. Navy before retiring from the service and the next thing, Scott manages to make this an intriguing opening gesture after all, for that other thing is a lump of a human body sprawled out on the desert floor, covered in blood and immobile enough for ants to have already begun picking at its flesh, and so badly beaten it's not even clear this is also Cochran, though that is in fact who it is.  It's a weird spin on a cliche hook, and pretty great as far as in medias res openings go—my initial assumption was that the F-14 pilot, who is barely more identifiable as Costner than the body is, was going to somehow spot the body and serve as his rescuer—and it takes a rewarding minute or two to finally resolve into two separate chronologies, exciting and gloomily fatalistic all at once.

It turns out that next half-hour or so does need this kind of goosing.  But our story, though starting a little slowly after this, is still very simple: having said his farewells to his Navy pals, Cochran heads down Mexico way to spend some time with his old and perhaps best friend, Tiburon "Tibbey" Mendez (Anthony Quinn), and if you don't think this is going to end poorly for Cochran then not only must you have missed the beginning of the movie, you also must not speak Spanish.  Mendez also has a wife, much younger than he, Miryea (Madeleine Stowe), who by her own account married the old goat out of love, but she's drawn to Cochran anyway, and Cochran is almost ridiculously transparent in his desire for her.  It is not long before they've begun a torrid affair, and with the slowness of someone who'd prefer not to believe it because it means he'd have to do things he'd rather not, Mendez finally discovers his wife's infidelity and his friend's betrayal.  And that brings us back to that body in the desert, while Miryea is scarred and delivered to a brothel to be "raped fifty times before she dies."  But Cochran is not quite dead and is delivered back to life by some friendly peasants, who have their own grudge against Mendez, and he heads back to secure his lover's release and possibly, if it's prudent, get revenge.
It's full-on elemental then, and in truth Revenge probably works for longer than it doesn't, especially if you don't count the lull between its prologue and when the affair kicks off amidst a performance of "La Bamba" during a festival, cross-cutting between Quinn, looking every day of his 74 years, dancing alone across spotlights, whilst Costner and Stowe...
Well, that's what the movie's famous for, to the extent it's famous at all, and while it still tells (to the best of my understanding) the same story, Revenge has two very different cuts.  One was the R-rated 124 minute cut that was released theatrically and which I haven't seen—and which does not appear to address my issues with the movie, which I don't like in the first place, so let's forget it (it's also not all that readily available).  There is, on the other hand, Scott's unrated director's cut, released seventeen years later, which is what we're reviewing, and I believe I'll be content to let Scott be my guide.  Unlike his brother Ridley, who rarely made a movie that he didn't want to tinker with for years, Tony Scott isn't really known for indulging in alternate director's cuts—I believe this is his only one.  (ETA: oops, True Romance.)  But the really unique thing about it, so rare that while I assume it can't be truly unique I can't think of any other example, is that this director's cut is shorter than the theatrical cut, and not even a little shorter, but fully twenty minutes shorter, despite reintroducing footage that wasn't in the original version.  The suggestion there is that Scott correctly ascertained that whatever resonance the film has, it's thanks to the pure primordial fairy tale at the heart of it, regarding a tarnished knight coming to save a defiled maiden from a hideous dragon—I know I've been bad at resisting the temptation to find the parallels between Tony and Ridley in their respective early careers when their aesthetics were still identifiably similar, but, weirdly, for much of its runtime Revenge comes off like the answer to the question, "what if Legend were a neo-Western neo-noir?"—and, in such circumstances, less would be likely to be more.
This gets wrinkled up by Harrison's story in ways that degrade that purity, and even when it is pure it still has little problems (even if it really appears to be a Spanish given name, I'm sorry, calling your villain "Shark" is stupid, especially if the symbolism exhausts itself at "mean and predatory").  But I have very little bad to say about how Scott puts it together, except perhaps for how he spins his wheels a bit with the lead-up.  And so there's that reintroduced footage, which I take to mostly be sex, and I don't think it's too much to say that Revenge is never more successful than when it's still operating as an erotic thriller.