Making love out of nothing at all 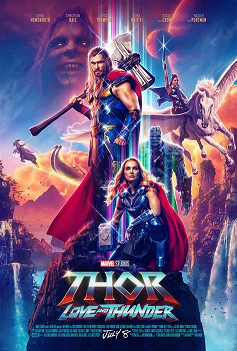 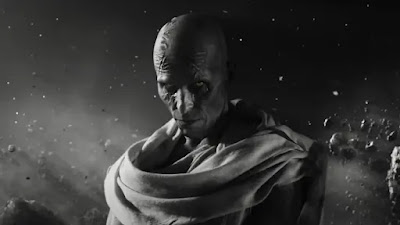 Maybe it's just contrarianism, but I refuse to agree that the MCU's Thor subfranchise wasn't "working" until Taika Waititi got ahold of it in its third installment, Thor: Ragnarok—The Dark World didn't quite work, but "one movie out of the three not quite working" was par for the course for all the MCU's main heroes, Iron Man and Captain America likewise getting (at least) one apiece themselves—and by the same token I'm not especially keen to accept the consensus that Waititi actually radically reoriented the franchise and its hero away from where they started, so if Ragnarok is indeed a lighter, frothier take on the God of Thunder than Kenneth Branagh's, it's not, like, unrecognizable.  He was a slightly-dim goofball there, too, and if in the intervening years Chris Hemsworth's talent for pompous, good-natured buffoonery was sharpened, that doesn't mean it wasn't already present, it just means Branagh is a filmmaker capable of juggling multiple tones in one movie and Waititi, well, at least used to be.
I probably overrated Ragnarok back in 2017, just happy to have a(nother) fun Thor movie, but now I doubt I could be absolutely sure of that, given that Waititi, whose Thor-that-worked afforded him the artistic opportunity (or maybe just the career obligation) to be the first director invited back to the subfranchise, has now made Thor: Love and Thunder, and Thor: Love and Thunder might well make Thor: Ragnarok worse.  It doesn't feel like a movie made by the person who made Ragnarok, it feels like a movie made by a person trying to copy it.  Or maybe not even people: I don't want to indulge the "MCU movies are made via algorithm" cliche too much, but feeding the basic plot elements into a machine would explain the inhuman uncanniness of the "random humor" on display, as well as the freakish inability to latch onto virtually any emotional resonance or thoughtfulness in a story that's about, albeit in no particular order, "murderous anger at your god for failing you" and "slow painful death by cancer."  Come to think of it, you'd probably assume that these two threads would be woven together somehow.  Or at least more robustly than a vague piece of braiding right at the end.
The former thread, anyway, is represented by Gorr (Christian Bale), whom we meet starved and withered in the middle of an endless expanse of desert on a dying planet alongside his daughter (India Hemsworth), and we have no reason to question Gorr's assertion that they are, in fact, the final inhabitants of this blighted place.  Soon there is only one: Gorr's daughter dies, and he would likely shortly join her.  But he spies a miragelike oasis in the distance, finding there water and food and, as fate would have it, one of his gods (Jonathan Brugh), who's celebrating a victory over a mystic assassin armed with the dread Necroblade, and who, upon noticing the scurrying, genuflecting humanoid before him, mocks him for believing in him or that in death he should expect any reward besides oblivion.  Unhappy Gorr picks up the Necroblade and slays the being he'd worshipped, becoming the God Butcher, dedicated to the destruction of all deities throughout the cosmos.
Meanwhile, the latter thread is represented by Jane Foster (Natalie Portman), whom we meet undergoing chemotherapy.  In a fit of inspiration, she seeks out the broken pieces of Thor's hammer, Mjolnir, as a possible cure.  It is, at least, a palliative.  She's able to wield it thanks to an instruction from Thor that the hammer keep Jane safe—apparently both Mjolnir and Thor's new weapon Stormbreaker are sentient now, and I don't remember when that happened, but I assume it must've happened somewhere because they surely do not set it up here, certainly not to the extent that they "set up" that Jane is Thor's ex-girlfriend, which I believe they explain five or six times—and Jane is transformed into a Goddess of Thunder.  It's only a palliative, however, and underneath her buff new exterior, Jane is still dying.  Mjolnir might even be accelerating her disease, a fact that is revealed in some hurried, spitballed exposition an hour and a half later than when it would've been dramatically useful, and presumably it's something that a scientist would've been interested in finding out for herself even earlier.  (Sadly, Jane's Ph.D. is applicable in this film only to the extent that she wrote a book about wormholes once, and she can later use it for a de rigeur "don't call me Lady Thor" joke in rejoinder to a comment wedged into the mouth of an elemental villain from Planet Crap who's decided to be unaccountably sexist for a few seconds, and, unfortunately, the joke isn't even "call me Doctor Thor.")