Have a nice trip, see you next 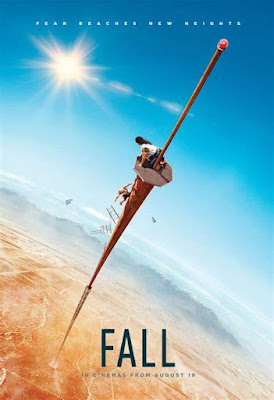 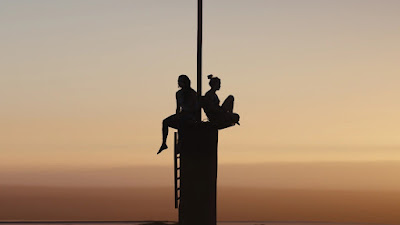 Fall is the simplest damned movie it may be possible to make while still having something of a high concept (so to speak), and it's a beautiful thing precisely up to the moment it exceeds the limits of its simplicity, when the anxious sweat kicked in for director and co-writer Scott Mann and his screenplay partner Jonathan Frank, whereupon they unnecessarily complicated things with a stupid gimmicky twist that breaks their film more than any film ought to be getting broken in its final thirty minutes, and it's made all the more obnoxious that it turns out they weren't even being stupidly original.  Fall is a survival thriller and, to get to the place it's going, even though it's not a place it should've gone, it openly rips off not one but two other survival thrillers, 2017's 47 Meters Down and 2018's Adrift.  Both of them last-half-decade recent, it feels like that should make the naked plagiarism here even worse than it already is; and both deploy the exact same stupid twist in more-or-less the same way and at the same place in their narratives.*
Until that point, Fall might not always be the absolute perfect version of itself, but every single thing about it works, frequently better than you might expect, frequently outrageously well, because Scott Mann the director appears to be much more talented and disciplined than Scott Mann the screenwriter, and the former is up to the impossible challenge the latter has arrayed before him, which is to make a white-knuckle thriller with precisely two characters who also spend nearly the entire movie in a location slightly smaller and with less freedom of movement than that enjoyed by their counterparts in My Dinner With Andre.**
That thriller, then, in its glorious simplicity: 51 weeks ago, on a sheer cliff face somewhere in these United States, we have thrillseeking climbers Becky (Grace Caroline Currey), her husband Dan (Mason Gooding), and her best friend Hunter (Virginia Gadsen; and obviously my second-biggest complaint about the movie is that 1)I don't like a movie directly addressing me by name this often, as it's distracting and I've had the privilege of never needing to deal with it before, and 2)Currey pronounces my name in the most bizarre manner, with stress on both syllables).  This movie surely has no room for three characters, so Dan is brusquely dispatched, and in the long interim Becky spirals into alcoholic, suicidal grief.  Hunter appears fully willing to let her stew, and the belligerent attempts at intervention from her father (Jeffrey Dean Morgan, a welcome if odd "get" for this two-scene role) have, if anything, backfired.
However, somewhere offscreen he prevails upon his daughter's friend to try to reconnect with Becky, as Hunter explains when she shows up uninvited with a plan that I doubt Becky's dad had any part in dreaming up.  Hunter, you see, has these past months entered the old YouTube fray, and for the clicks and the subs and the melancholy and the infinite sadness, conceived of a daring new project, climbing a long-abandoned TV tower, a fictionalized version of the KXTV mast in Walnut Grove, CA, only this one's rusty and rickety and out in the middle of a desert inhabited exclusively by evil vultures.  Her object is to drag Becky along with her up to the top of the seventh- or eighth-tallest structure ever built by human hands, whether she actually wants to go or not.  Becky's out of condition and out of practice, and it doesn't seem like the brightest idea in any circumstance; but her friend is persuasive in her mania, and she is, after all, suicidal.  Yet the plan comes off: the instant they start their ascent all those self-destructive thoughts do indeed fly right out of her head, replaced with the immediate terror of being really high up on a Goddamn pole.  So far so good, except after they complete the final leg of their ascent onto the two-meter-square platform atop the tower, a segment of ladder—their only way back down—falls off, and they are trapped: no water, no food, no cellphone service at this altitude to call for help, and always one mistake away from just tumbling 2000 feet down to the ground below. 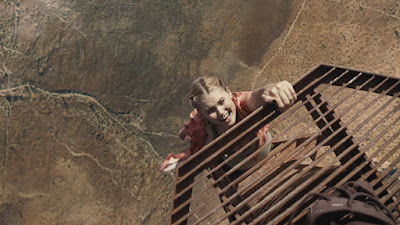