What a disaster: "Geological faults"? I knew sooner or later you'd get around to that tired old chestnut 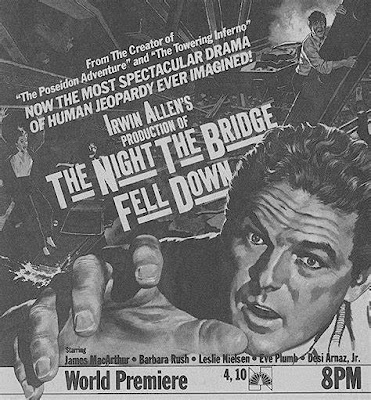 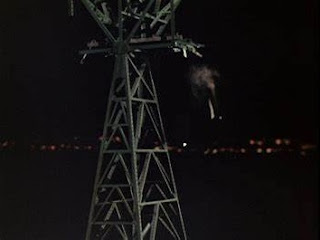 By the end of 1979, for reasons atop of reasons, the association between Warner Bros. and Irwin Allen was winding down.  While he still had one theatrical film left in his contract and Warners would dutifully fund it, clearly the studio and their own partners were just waiting for that association to finally end so they could stop burning money on a dead fad.  This is nowhere more obviously felt than in the other deal Allen had with Warners to produce a series of broadcast films for NBC, which by the close of '79 had resulted in fully five pictures, only three of which had actually been aired by that point.  I can't speak with authority as to how successful Allen's telefilms had been, but they couldn't have been too well-received: the fourth one, The Night the Bridge Fell Down, got thrown in a closet, and it was only finally pulled out four years later, on the all-important night of February 28, 1983, to serve as NBC's perfunctory sacrificial lamb against the series finale of M*A*S*H, a job that might as well have been given to a test pattern.
Obviously, I'm not here to tell you this crummy thing is better than the series finale of M*A*S*H.  I will tell you, however, that The Night the Bridge Fell Down is reasonably adequate, which presents itself as a genuine miracle at this decadent stage of our disaster cinema retrospective: of Allen's five telefilms, it is the very first to finally hit that benchmark.  Maybe the producer was just due, and the law of averages had to kick in sometime: frankly, Allen's first three TV disaster movies had gotten worse as they went along, recently bottoming out with Hanging By a Thread (like this, directed by Georg Fenady), which did air in 1979—to clarify, that's the dilatory chamber drama set on a broken alpine tram, that is also three and a quarter hours long—and which I presume did so poorly that it was the proximate reason that Bridge and Allen's other disaster telefilm, Cave-In, did not get to air.  What Bridge feels like, however—at least to a certain degree, and at this point a "certain degree" means the world—is Allen and Fenady absorbing the lessons of their failures, and figuring out a way to fix some of them.  The most blatant problems, in fact, are fixed: for starters, Bridge actually works as an exercise in its chosen genre, and comes off like a significantly larger amount of money got spent on it to effect its genre thrills, though my suspicion is merely that its money was only spent more intelligently. 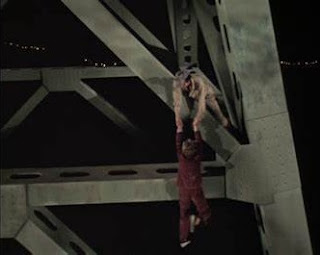 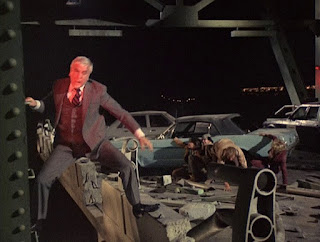 Bridge is obliged to take recourse to sometimes-iffy modelwork, and not just iffy in terms of believability (they forget to burn one of the model cars after setting fire to the full-sized car, for example); but bridges do seem to be some of the harder structures to render credible destructible models out of, with the scale versions always having a bit of a popsicle-stick quality to them.  I have surely seen worse model bridges fall down, however, and even if the effects are a little dubious, at least Allen isn't stingy with them.  And there's imagery that offers genuine aesthetic pleasure, not even grading on a curve: these, I think, use real locationwork and stuntwork (or else some truly superb compositing), and I never got tired of watching the stuntpeople clamber around the borderline-psychedelic mess of Escheresque angles created by the girders in the bridge's support structure.  (I did get tired of cameras attached to the roofs of emergency vehicles behind the flashing red lights, Police Squad style, but Fenady does have space to fill, doesn't he?)  The score, meanwhile, is downright heroic: the amount of this movie that composer Richard LaSalle actually scores would be remarkable in its proportions even for a shorter movie, and it's surprisingly varied—I'm particularly keen on the weird innovation of a disco motif (he uses it for the evil villain), standing out amidst the loving Airport knock-off of the rest of it, and even though by the last hour he's starting to repeat himself, he does still have a few new ideas to pull out, like some anxious strings during the hazardous climb down.
Well, that brings us back to problems—it is never 100% clear, and becomes more unclear as the film climaxes, what the fuck the problem with simply climbing down was.  (Or why a thirty-foot fall into water would remain scarier than going to prison once you've already climbed four-fifths of the way down.)  It's perhaps also worth mentioning that all these cars are still functional, and somebody expendable attempting to run Pyle over would've made for a pretty cool action scene.  Oh, but I said "expendable," and that's where Bridge starts to lose it, unfortunately: in this, we might have the single most edges-rounded-off child-safe disaster movie ever, depressingly indicative of Allen's decay from what he'd been even just a year earlier, his genre's greatest philosophical absurdist—hell, even the novelty of throwing an out-and-out sociopath into the mix of a disaster movie doesn't really pay off.  No, this script makes it blaringly obvious who's marked for death (they are also very few), so that it can't even be called "bad" that eventually one of them effectively just seems to fall off the damn bridge on purpose in a bungled bit of direction from Fenady, since it wouldn't have been too out of place, and wouldn't have really mattered, if lightning from heaven had struck him down instead.  That's a sour note to end on, but I hope it throws the rest into relief: it's only even relevant because this TV disaster movie nobody saw is, otherwise, actually kinda good.
Score: 6/10
Posted by Hunter Allen at 12:53 AM