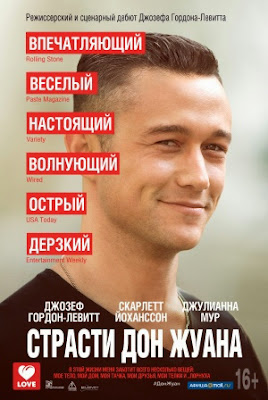 Do you remember that great romantic comedy, Eyes Wide Shut?  Sure, doesn't everybody?  My point is, if Tom Cruise had had the Internet, he could've saved a lot on cab fare and costume rental, and arrived at the same or better results.

My other point is, like Eyes Wide Shut, Don Jon was made for adults.  Not just because it has about five to ten minutes worth of sexually explicit material (in the form of pornographic clips), and also like Eyes Wide Shut reportedly had to contort itself on a few of the more intense occasions in order to secure a less-than-NC-17 rating.  Nor is it because Tony Danza says the word "fuck" a lot, although that is worthwhile.  It's a movie for adults because it deals with genuinely adult issues.  It's therefore something of a shame that when it finally comes time for its characters to address them, they're lucky enough to address them through magic.  That is because, unlike Eyes Wide Shut, it was made for adults who have adult feelings and, perhaps, have had adult experiences, but still possess only the emotional maturity of a child. 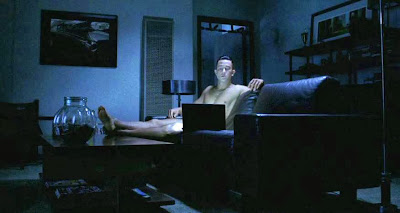 I dunno if I'm seeing the conflict in your screenplay, Joe.

Yes, his life, while in many ways awesome, has nonetheless grown tedious, and he seeks a change.  Don Jon  is probably a better movie, and certainly is far more subtle a movie, about this quarter-life crisis than it is about its more explicit subject matter.

Because Jon is unwise, Jon thinks that all he needs to correct himself is a long-term, committed relationship with the hottest woman he can get.  Because he is exceedingly unwise, he pursues, and is in return ensnared by, one of the more hissable villains of 2013, Barbara Sugarman.

Barbara is a shrew.  A harpy.  Although she proves a harder target than Jon's previous partners, she's rather well-acquainted with country matters.  If you get my drift.  If I were talking about an actual person, or even an actual character, that would be pretty misogynist.  Luckily, Barbara is less like a human and more like a collection of negative traits, such as are routinely applied one at a time to female characters, here applied all at once, that happens to look like Scarlett Johannson.

She's prudish but not so prudish she can't use a dry hump as a weapon.  Furthermore, she's mean, she's classist, she's manipulative, she's undermining, she's controlling, she's empty, and I think she's kind of dumb, too.  But she does look like Scarlett Johannson, and that can cloak even the most obvious interior flaws, if you're of the ScarJo persuasion, and most are.  Unfortunately, despite the indubitable visual stimulation, and although it takes Jon a lot of effort to get there, sex with Barbara still isn't great (or good).  Again frustrated, he turns to the cure for what ails you, but this time he gets caught.  Given the way she reacts, you'd think he was watching child pornography.

This is obviously fair.  After all, he's got her, right?

The normal person's reaction, in 2013, is, "Is this woman for real?"  And, no, of course she isn't.  It's a movie, silly.  No one of her age, in this era, and still this incapable of communication, compromise, and connection really exists, and if she does, she'll die alone and unloved, and human fitness will be improved because her eggs have the bad person gene in them and do not need to be propagated.

Don Jon originally bore the significantly less suave title Don Jon's Addiction.  (In Russia, it's still Strasti Don Zhuana—The Passion of Don Jon.)  Jon admits, in voiceover and eventually to a friend, that he actively prefers sex with less than two participants.  This is a revelation which seems to ask why he chases after women with such vigor in the first place, but it actually doesn't.

Leaving aside the fact that this is America, by God, and rugged individualism is our birthright, it's easy to see why intercourse bores him: the sex he has with his one night stands is objectively bad.

The old "And then they cut to the guy's face!" gag makes its obligatory appearance in Jon's soliloquy about porn-assisted masturbation.  This is an editing technique from the 1970s.  It's used to compress time—in this case, compressing the time the actor spends jerking off for however long it took in real life to achieve orgasm, and sometimes to hide the fact he didn't, because my goodness, Sex Is Terrifying—and it fell out of favor a long time ago, probably before stand-up comedians in the 1990s picked up the banner of more anonymous male talent.  It is pretty rarely used in modern pornography.  I won't insult your intelligence by underlining my point here.

Jon is specific in his complaints about sex.  They seem to me like real issues.  They're only partly based on anything I recognize as accurate or sensical, but I guess they're pretty valid within the limits of his paradoxically puritanical sex life. 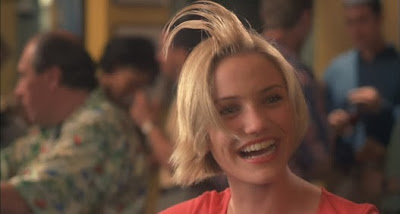 With some reservations, anyway. 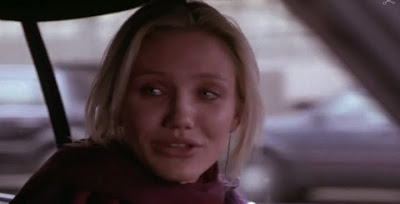 So why then is Don Jon at the same time so conservative—and inaccurate?

Real sexual issues associated with an overreliance on pornography are largely absent.  Jon may prefer masturbation, but has no trouble coming during vaginal intercourse, with a condom, with poorly-skilled or unmotivated partners, when they're both drunk.  There are no scenes of JGL jerking off in front of an increasingly bored and frustrated and feelings-hurt woman for twenty minutes, trying to scare up the one image that can set him off, because through lack of foresight he came four times earlier that day, or because he's not that into the sex that he's having, or just because he's trained himself to sexually respond to the different sensory stimulation of his hand and flashier visual material—there's a paper about that, look it up.

An actual harmful compulsion worthy of an addiction does finally crop up, I'll concede—and it provides the trigger for one of the movie's best jokes, as well as serving as one of the only signals that Jon has a problem other than being a good pick-up artist but a lousy and delusional lay, unwilling to develop his partners' abilities and the lines of communication between them.

None of the identified physical deficiencies in his lovemaking are definitively corrected by the end of the movie.  Instead, love itself—or emotional connection, I suppose—conquers all.  It's possible, maybe even probable, that the woman he does end up with has actually just gotten better at fucking (she'll do cowgirl—the kinky little minx!), but that's probably not the conclusion we're expected to draw.

The fact is, and all of us who have had sex know it, you can have bad sex with someone you love, and great sex with someone you don't even particularly like.  Emotion is not the only factor.  There is no one factor.  There are no sufficients here.  Don Jon is almost as simplistic in its conclusions as the more conventional romantic comedies its protagonist despises, and which JGL seems to agree are just as intellectually and emotionally invalid as his movie presents pornography.

Don Jon is willing to offend and discomfit, and for a movie marketed to a wide audience, that's credited, but in the end the only really shocking part of this movie is how it moves with such alacrity from a sort of fuck-you confrontationalism with (its idea of) our ideas about sex directly to rank sentimentality.  It doesn't go all the way; there are suggestions that, although it'll be fun while it lasts and has a meaning to it that he's never felt before, the relationship Jon finds in the end won't go the distance.  The movie's not that deluded, and points where points are due.  Yet the idea that sex is all about how you feel about the other person is not just dumb, it's the same awful lie you can hear in movies with far fewer pretensions.