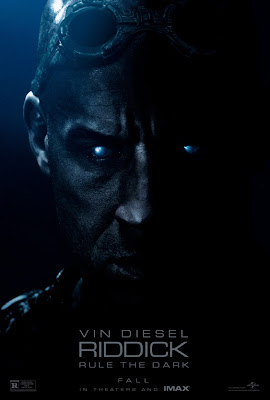 
I'm the perfect test case for whether the third film in the Riddick series is accessible to an agnostic audience.  I've never seen Pitch Black and, like the larger part of the world, I've never seen The Chronicles of Riddick (let alone the cartoon Dark Fury).  Thus, all I knew about this character or his world I learned through osmosis, and since Riddick is a lesser light in that big sci-fi sky, what I learned was pretty limited: he's big, he's mean, he fought some xenomorphs on a spaceship once with some success, his name is a killing word, and he can see in the dark.  Oh, and, he's something called a "Furyan."  Which is, without prejudice, hilarious.

I know very little more about the Riddick mythos now than I did a few hours ago.  I did learn his first name.  And it kind of bummed me out.

The Chronicles of Dick.

There is a narrated flashback that details how he wound up marooned on a desert world, apparently through some sort of Harkonnen palace intrigue.  It involved Judge Dredd and some vulvar nudity, and I approved.  I did get that he was searching for his lost homeworld, Furya (yes!).  I'd tell you the name of the planet upon which he wound up, but I don't want to spoil what is, arguably, the best part of the movie.  I laughed and laughed and laughed.

Riddick's monologue does set the tone.  If the other movies are written thusly, I must see them.  Diesel's narration is hypnotically awful and punctuated by the best worst jokes you're likely to hear in a theater this year.  When other characters do show up, they too are written at a level of literacy, maturity, and wit below that found in the average 1992 issue of Youngblood, so much so that it shows remarkable and almost lamentable restraint that no Hurtz donuts were offered, nor did a gaywad say "What?"

The fundamental problem, of course, is that the rest of these folks are not Vin Diesel, who is so natural and charming at sounding dumb.

It's a shame also because the first twenty minutes or so of Riddick are in fact legitimately excellent.  Riddick may sound unpolished, but he's a first-rate survivalist.  His lonely planet is a harsh and forbidding place, arid and without much to hunt or to gather, probably because everything else has been eaten by alien hyenas (who come to be called, yes, "dingo-dongos") and, even more dangerously, a whole species of scorpion kings.

They have a name I didn't quite catch, because it wasn't memorably retarded.

Yet Riddick manages.  Indeed, although our experience is compressed to a highlight reel, he must manage for a very long while.  Assuming that dingo-dongos have a life cycle roughly approximating the earthling dog, and going by the growth of the infant D-D he captures and domesticates, we can calculate his exile at no less than a year, and probably more.  In a winning mix of Space White Fang, Space Cast Away, and Space Enemy Mine, he improvises tools and weapons and an immunity to monster poison, and thrives in the midst of his adversity.  Finally, he fights his way out of the deadly desert and across the imprisoning mountains, into what he describes as a grassland, which in indomitable Furyan talk means "a land of a slightly richer shade of brown."

At that point, the actual plot kicks in: Riddick finds a mercenary cooperation station, which looks like the back of a Wal-Mart.  As a wanted man, he's content at first to merely raid their rations and gear; why bother calling people he's just going to have to kill?  He plans to settle in for the rainy season.

He's going to take some time to do the things we never had.

Unfortunately for Riddick, he doesn't yet know as much about this planet's ecology as he thinks he does.  But he's getting the idea.

"Indy, why does the floor move?"

So he activates the emergency beacon, luring two ships full of bounty hunters to his location.  The first ship disgorges a motley crew of working-class spacemen, led by a loudmouth named Santana, who seems obsessed with putting Riddick's head in a box (it is never made terribly clear why decapitation is preferable).  The second group is more professional, more official, and dress in totalitarian uniformity.  Surprisingly, they're the good guys.  They're led by a dude named Johns, which may or may not mean something to someone who's seen Pitch Black.  As a result of his character's connection to Riddick, Matt Nable gets to emote sometimes.

Other than Diesel and (the not-really-in-this-movie) Karl Urban, the only person whose name you're likely to recognize in the credits is Katee Sackhoff.  She's a member of the crew who actually look like they're in a sci-fi movie.  As I tastelessly alluded, though believe me far less tastelessly than the film declares, she's a lesbian.

This is her character trait; in fairness, it is one more than about half of them get.  It doesn't really have any significance, except, as we'll see, to infuriate people.  If her name were Thrace, it would probably be injecting too much external personality into the role, but I'm pretty sure she still has the exact same haircut from 2009 and she wears tank tops, so Sackhoff is absolutely doing what she's being paid to do. 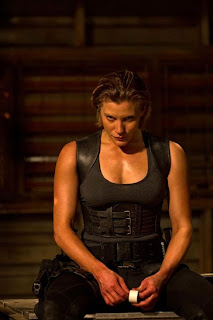 So, with both teams competing over Riddick's capture, they naturally partake in stupid personality conflicts and stupid jurisdictional fights and stupid attempted rapes, until such time as they stupidly acquire their target and put the man in chains.  Then some more fun things happen.

You may or may not remember the ridiculous scene from the trailer where Riddick predicts, correctly, that he will get out of his restraints and kill Santana within a certain amount of time, and as soon as he has his foot free, manages to murder the man with his own machete by kicking it across the room at him.  It's even more ridiculous in the film—and, honestly, it's a real treat.

Anyway, Aliens happens (again): the rainy season is also the breeding season for the scorpion monsters, and outside their increasingly unsafe shelter, they're swarming.  Naturally, it becomes necessary to leave the shelter to conduct a mission to obtain an object that is required for them to leave the planet (specifics are neither necessary nor desirable), and it leads them into the heart of the monsters' spawning ground.  You'd think there'd be slightly more monster fighting, but this movie was not very expensive.  Taking that as given, what we get is good.

Indeed, the cheapness of the movie is actually a bit of a strength.  Material like this doesn't need money, it demands a juvenile purity of spirit.  It's not actually bad-looking (I found the desert rock formations and all that CGI lightning to be very pretty, and I think the closeups of the scorpion things were even done practically, or else by some very competent robots).  But it isn't Avatar or even After Earth, and thank I Am for that. Sometimes I want to see flying motorcycles on a poorly composited background and I don't always want to have to watch Megaforce to do it.

Only most of the time.

In another production I'd probably seriously complain about the monotony of the endless brown, yellow, and orange color palette, but aside from the fact that at least those colors are bright, as opposed to the endless blue-and-gray dominating our silver screens today, it fits Riddick like a glove, almost analogous to a black-and-white aesthetic.

And that's so appropriate.  Riddick is, perhaps even self-consciously, a hybridization of a '40s space serial with '80s badass cinema, at least as watched and understood by a twelve year-old.  Take it as that, and this aesthetic looks and feels absolutely right.

I could have said it's also because Riddick is more than a bit turdy, and that's not inappropriate either.  If the movie also looks and feels dumb and offensive, well, it's because it's dumb and offensive.  And that does make it a lot more borderline than it should have been.

But did you know that if a man sufficiently impresses a lesbian, she'll have sex with him?  The imagination of a child is truly limitless. 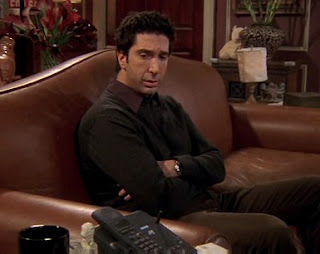 P.S.: I know that Vin Diesel isn't dumb.  If you enjoy the guy, and I do, seek out Multi-Facial, the short film that got him on Steven Spielberg's map and jumpstarted his career.  Yes, the title is somewhat misleading, as it's actually about race in casting, but it's still pretty good.  It's on the Youtubes, do enjoy.
Posted by Hunter Allen at 3:29 AM