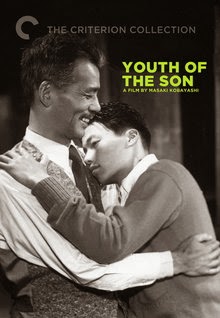 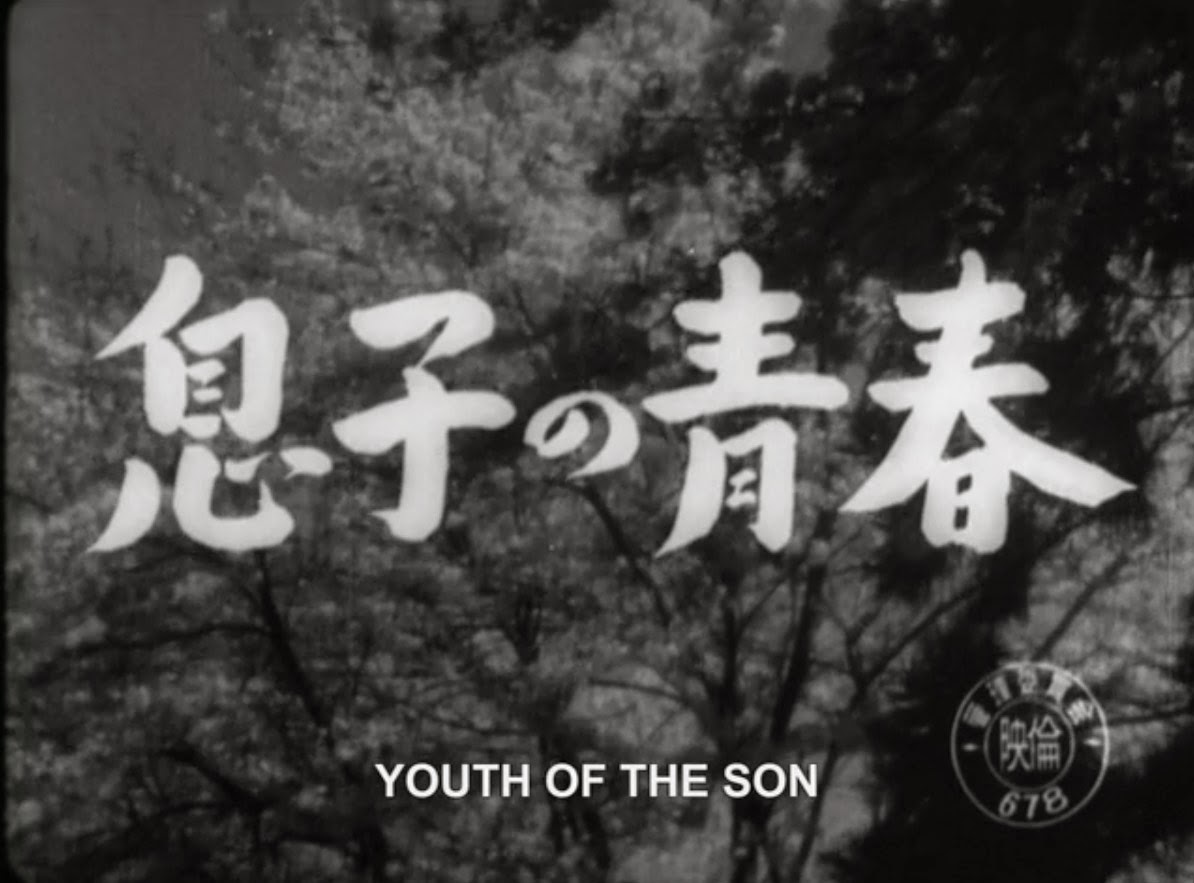 Masaki Kobayashi got started in film in 1941, when he graduated university and scored an apprentice director position at the Shochiku company.  If you have ever read a book in your life, it is easy to guess why he didn't actually do anything to speak of for Shochiku until five years later, didn't direct his first film until 1952, and didn't make a full-length motion picture until the year after that.  There was this thing called the Pacific War; that's World War II to you and I, assuming "you" are an American.  Folks in Japan had a tendency to become involved in it—whether they wanted to or not.

Young Masaki emphatically did not.

He did serve briefly in Manchuria before being sent to fight the Americans, whereupon he was captured and spent the rest of the war as a POW on liberated—if you'll permit me to use the term—Okinawa.  In point of fact, Masaki Kobayashi himself very well might not have agreed with that sentiment, as we'll see a couple of films down the line.  Nonetheless, one can't help but suppose that he was much happier in an American camp than he was when he still faced the prospect of dying—or killing—for what he only sort of considered his country.  Kobayashi was, after all, a pacifist.  Famously, while he was still an active member of the IJA, he refused any promotion.  Thus the college grad spent his entire military career as a lowly private.

To put it very mildly, I doubt his pronounced lack of enthusiasm for raping Koreans, pursuing germ warfare, and stealing oil made him very popular with the mindless Emperor-worshiping fascists who comprised the majority of his comrades and superiors.  Even the most passive resistance to a system like Imperial Japan's deserves some credit, and Kobayashi's courage is duly credited.  Let's all be thankful that his commanders did not force him to charge American machine guns without the expectation or hope of anything but being chopped to pieces for the glory of the military-industrial combine that ran Japan like a poorly-organized death factory.

After the war, Kobayashi returned to Shochiku, under the tutelage of Keisuke Kinoshita, the foremost melodramatist in Japan.  We'll discuss Kinoshita's influence a bit more in our next part, but it was a nurturing if initially—let's say—sheltering influence.

Oh, but let's not be so coy: Kobayashi has a reputation as one of Japanese cinema's fiercest social critics.  He clearly kind of hated the culture he grew up in.  (As a 21st century American, I can sympathize.)  So, when he finally got the chance to make his own movies, what was this firebrand's first order of business?

He made a nice family sitcom.

My Sons' Youth is such a pleasant piece of 1950s fluff that you keep looking for a sign that it was made in America—the only tell, other than the non-white people and the subtitles, is the reliance upon bicycles and trains instead of powerful motor vehicles that stoke the individual spirit.  There is not one frame of the film that would indicate it takes place seven years after a conventional and atomic bombing campaign had destroyed vast swathes of the surrounding country, or that millions of Japanese had died at home as well as abroad, or that the economy is shattered, or that millions continue to barely subsist in poverty, or anything like that.  Hell: beating The Simpsons to the punch by half a century, it's not entirely clear that Dad even has a job—though it is certain they're getting by quite fine, thanks.

My Sons Youth strikes the ancient balance between that subversion of family values wrought by the demand for gags and its ultimate reinforcement through its morally upright construction.  It's bound to remind you vividly of Father Knows Best—and it can do this even if you've never even seen Father Knows Best, and wound up watching an episode only to supplement the genetic memory of the Anderson family that's been coded into your all-American DNA. 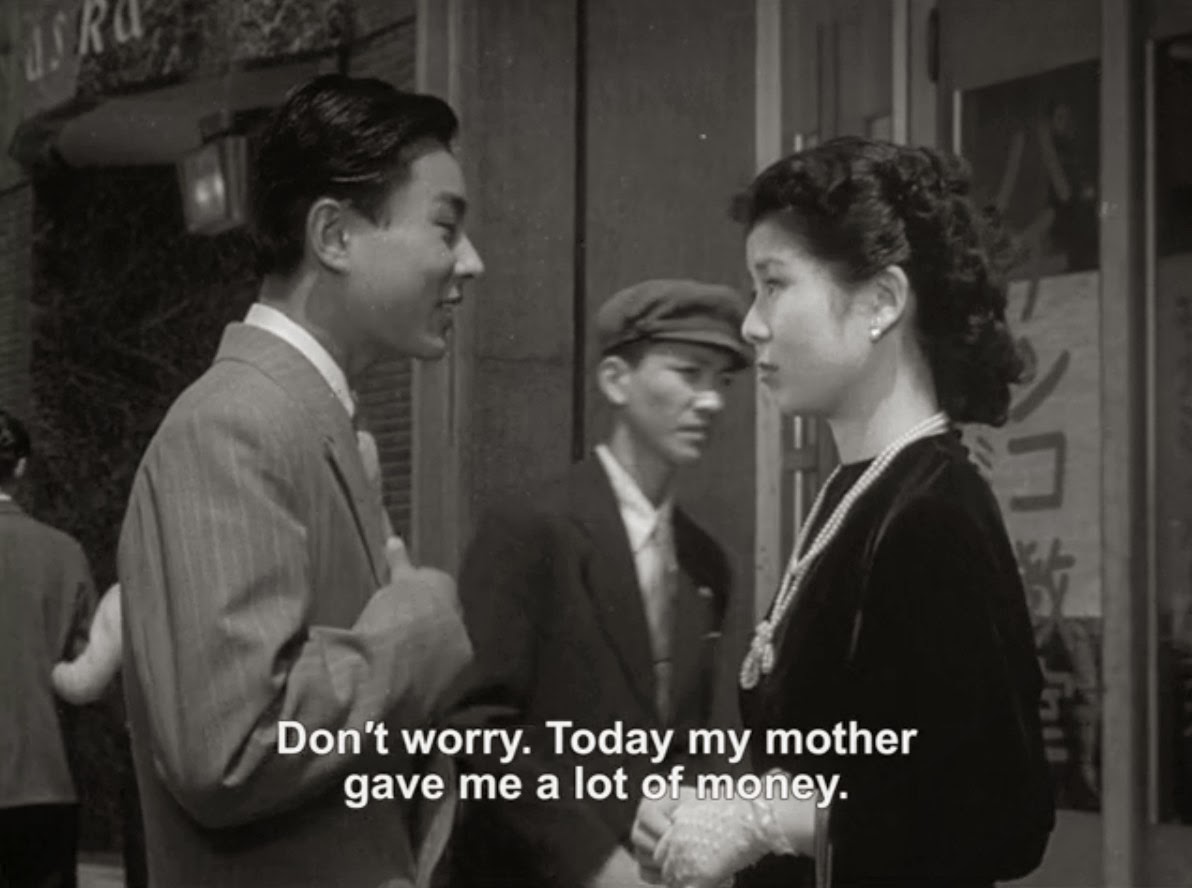 The episode was "Bud the Millionaire."  Did he learn a lesson?  You bet he did, the arrogant little shit.

That balance is best exemplified by a mild paternal head trauma gag when Dad stands up so fast he bangs his skull on a low-hanging crossbeam.  And, yes, it is actually funny: maybe primarily because you don't expect such well-worn American tropes in a Japanese movie.

The plot, such as it is, revolves around—wouldn't you guess it—the youth of Dad's two sons.  (You easily might not guess it if you went by Criterion's translation of the title, the awkward Youth of the Son.)

Dad's two sons, however, are Haruhiko and Akuhiko.  They are very close in age—and each are becoming adults as quickly as the other.

Haruhiko's the older and he's beginning to get interested in girls—at eighteen, an age at which most modern Japanese teens have already decided trying to have sex is far too much effort.  Haruhiko's first romance blossoms with a sweet classmate, Tamiko.  She is so shy that when Haruhiko tries to take her to a fancy—and expensive—French restaurant, she has to run away, dragging him with her (is she the perfect woman? perhaps). 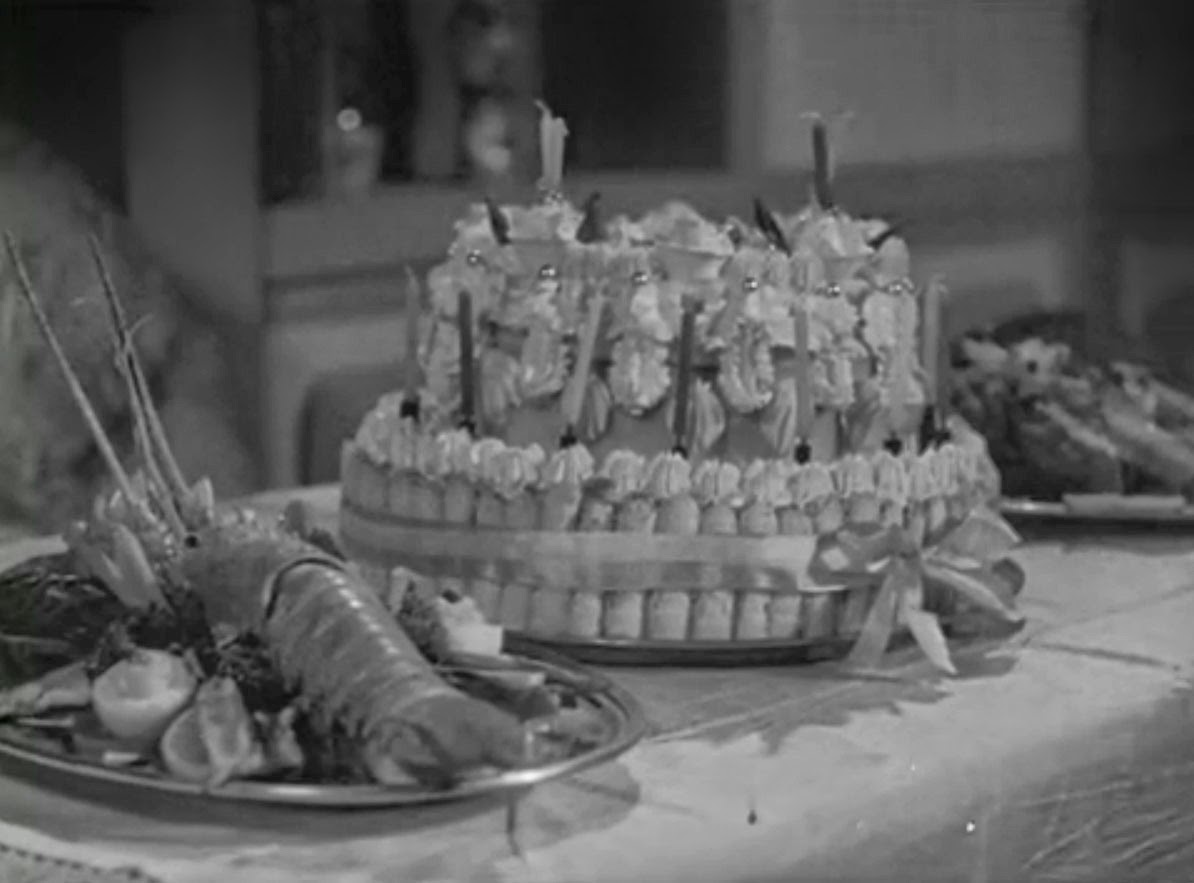 You can always have a nice cake and lobster dinner at home.

Prefiguring his elder's adolescent scramble for girls, Akuhiko is getting interested in fighting other dudes.  But Akuhiko, having fallen in with his marginally bad crowd, winds up in jail... for about two hours, before Dad gets him out with no charges through the simple expedient of a calm conversation with the police.

However, the focus—again, such as it is—is predominately upon the parents' reactions to these developments; and it is very specifically in their role as parents that the film cares about them as characters, which is why their names were so memorable I refer to them in this review as "Mom" and "Dad."  The theme is their steadfast support of and love for their children; the subtext, their bittersweet appreciation that they'll be out in the world soon, and no longer safe with them.

This is a tale as old as the old people it is designed to service; but the faintest efforts are made toward achieving something akin to genuine melodrama.  Tone is light, crisp, and thoughtful almost throughout—but the film is at its worst when the family gives in to rawer, less refined emotion, in the midst of what passes for a crisis in their world.  Learning of Akuhiko's arrest, Dad brusquely pushes Mom out of the way, calling her an idiot for being such an obstacle with her womanliness. 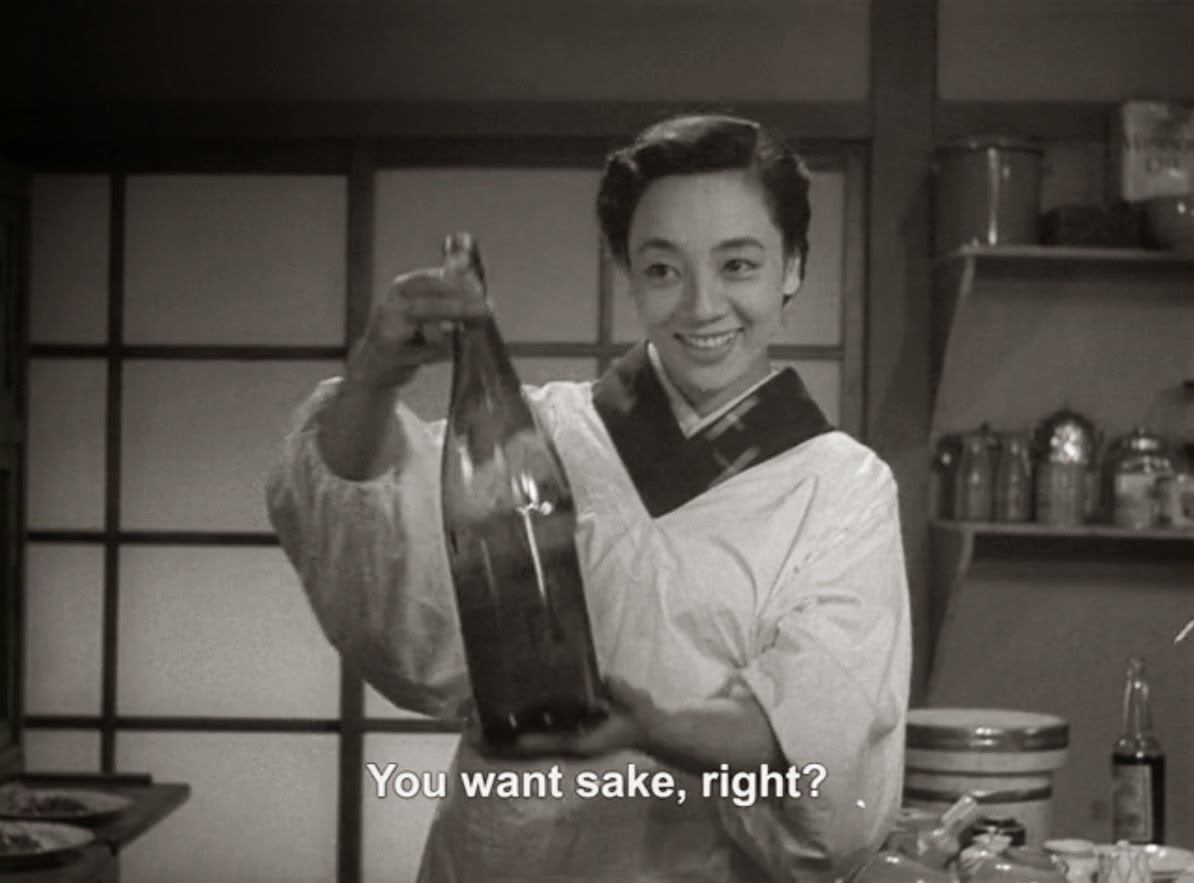 It's otherwise exceptionally precious, but while I certainly enjoyed its hearty patriarchal morality and its couple of decent laughs, I'm confused as to why it even exists.  The film is a few seconds shy of three quarters of an hour long, and I simply can't imagine anyone being compelled to make it for other than purely commercial reasons, nor anyone watching it except for only the most mellow entertainment.  Was it just an early experiment in product placement? 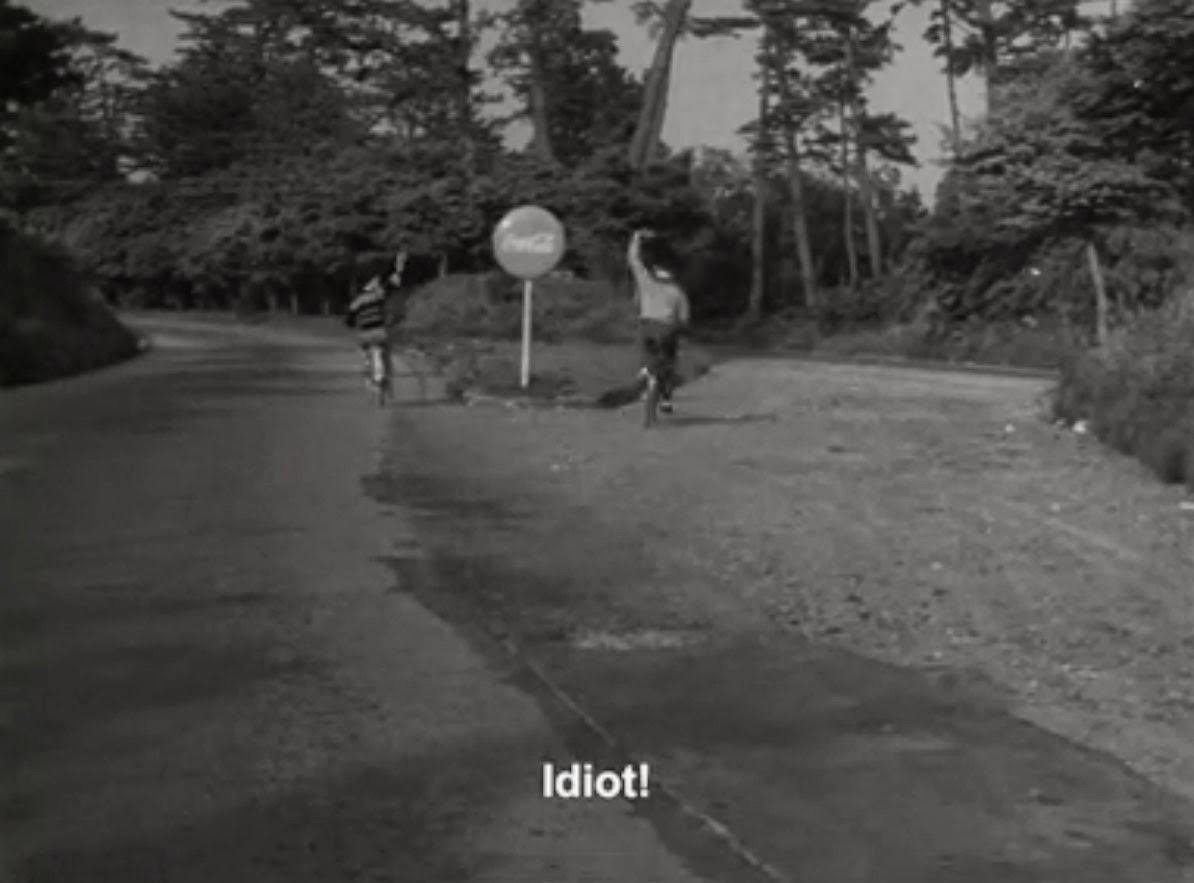 "It was 1952 and people just went to the movies" is perhaps a sufficient explanation, if an unsatisfying one.  It was, I suspect, just one more piece of a time-filling program—a piece of ephemeral filmmaking and entirely by design.  If this hadn't been Masaki Kobayashi's very first movie, no one outside of an exceedingly scrupulous Japanese film scholar could possibly care.

But it is, so just what personal touch does Kobayashi bring?

Approximately zero.  It's filmed competently, but without much flourish (though what flourish would've been appropriate?).  It's paced well, if not quite with the exacting rigor of most of his later films (though, unfortunately, we'll see, not quite all). And yet, in the context of his later career, and his personal history, the final scene has a distant ring of irony to it.

After Akuhiko goes to jail (offscreen), we find out what he did to land himself there.  He and his no-goodnik pal had gotten into a fight with a couple of out-of-towners, beaten the stuffing out of them, and Akuhiko took the wristwatch of one his vanquished enemies—converting his misdemeanor battery into the potential for felony robbery.  But as the deliquent kid's father explains, thievery wasn't his end, just his means: he simply needed proof that he won the contest.  Because masculinity, I guess.

Our Parents are briefly upset, and the potential for real consequences seems to loom momentarily, but when Dad gets the boys out, their anger and fear turns to relief and joy in the most halcyon manner possible under the circumstances.

Indeed, the two dads instigate a mock fight between the two brothers and the third boy, celebrating their sons' martial prowess.  And this is where our nascently-critical Kobayashi could be commenting on something or other about the place of violence in society—a privileged one.

But, of course, unless you're fixed in on how the director was a pacifist, who would no doubt disapprove of rolling a couple of guys and jacking their valuables—something no one watching the film at the time would know—these deep, pretentious thoughts could hardly cross your mind.  Nothing in the editing, blocking, or performances suggest anything more than happy, heartwarming resolution.

It's probably enough that, with our advanced 21st century morality, we can see some issues that ought to be addressed by their fathers and aren't.  As a low-impact slice of sentimentalized Japanica it remains genuine, warm, fuzzy, and endearing fun.  Yet as Kobayashi's opening move in a career what would eventually become a vicious campaign against Japanese mores both past and present, it's a bizarrely trite and entirely needless affair.

With his next film we'd see what he really thought of middle-class family values.  Spoiler: he thought they sucked.