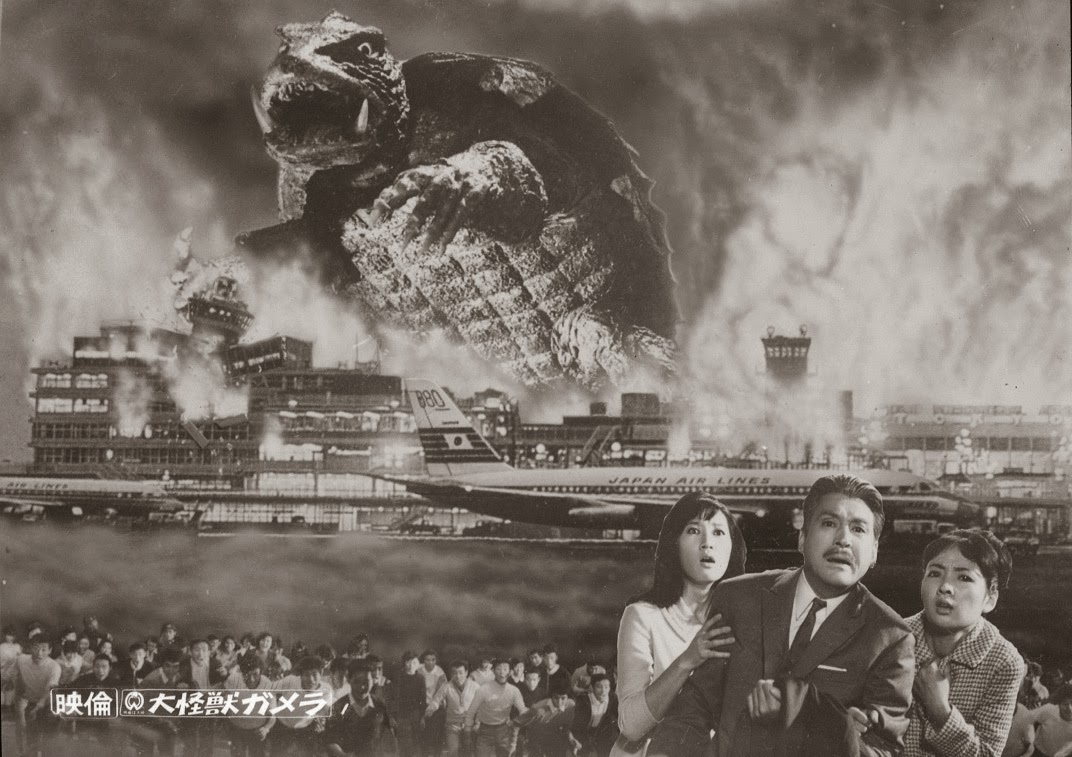 Perhaps it's not entirely safe to assume you already know who and what Gamera is.  With admirable understatement, the faceless editors of Wikipedia describe him thusly: "Gamera has the general configuration of a turtle, albeit a tremendously large one that is capable of walking on two legs and flying."

He can, naturally, also breathe fire; indeed, in his earliest incarnations he subsists upon flames and heat.  He's been known to cause property damage and collateral deaths, but as the headliner of his franchise, he tends mostly to fight other monsters for the good of humanity.  He's a kaiju.  It's not that complicated.  It's just wonderful.

In 1965, it may have looked a little late to start cashing in on the then-fading international trend of sci-fi B-movies, and giant monsters in particular, but the Daiei company wanted to make a monster movie anyway, and so, being a movie studio and that being their business, they went right ahead and did it.  Gamera himself was first conceived by screenwriter Nisan Takahashi, whose dream, sadly unfulfilled, was to eventually make a kaiju movie without a single speaking part for a human; Gamera's iconic look was crafted by Noriyoshi Inoue, who, it is said, did hundreds of sketches, only to ultimately use the very first; Teruo Aragaki brought the strange beast to life from within the heavy turtle suit; and, finally, Daikaiju Gamera was brought to the screen by the singular vision of director Noriaki Yuasa.

Takahashi wrote every one of Gamera's features in his first series (Gamera's history, like another famous kaiju's, is divided into three eras—the Showa, like the unprosecuted war criminal, ranging from 1965-1980; the Heisei, meaning economic stagnation, 1995-1999; and the Millennium, 2006).  Yuasa directed all but one of Gamera's Showa series, and even for that he directed the special effects sequences.  It's hard to imagine a better test case for auteur theory.

They say Gamera's a rip-off of Godzilla, but that's preposterous.  Godzilla is a lizard.  Gamera is a turtle.  But the beast from 20,000 fathoms was a lizard.  Who exactly is ripping off whom, hm?

There is one other important wrinkle: Gamera is the friend of all children.  Although there are other, more interesting reasons why this is so—and we'll get to them when we can talk about them in more depth—the most important one is simple: children like monster movies.  If you didn't, you were probably never a child.  You were simply a small, undeveloped adult—most likely lacking a soul.  (Or, perhaps, you were a girl.  Anything's possible in this crazy world.)

But possessed of both soul and penis, I simply had no choice but to fall in love with monster movies, from King Kong to The Terror of Mechagodzilla.  Indeed, every red-blooded American boy has seen at least a couple of films from Toho's catalogue of kaiju flicks.  But me?  I devoured all the available giant monster films so readily that even that seemingly inexhaustible supply couldn't satisfy me.

Daiei had been helpful enough to title their own headlining creature with a name starting with the letter "G."  So, finding a curious fire-breathing turtle sitting on the shelf just above the Godzilla movies, it took very little to get me to (beg my parents to) shell out the three bucks for a rental.  There an obsession was born.  Call me Kenny, because Gamera became my friend too. 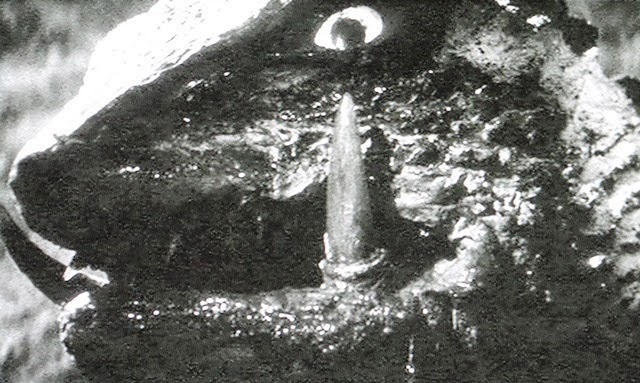 I was a lonely child.

I wore out the VCR on the mere four cassettes the store could offer.  I came to suspect quickly that there must have been more—whence that stock footage, whence?  But in the Before Times, when the word "Internet" wasn't something you said two dozen times a day, an eight year old had few resources to track down a complete list of all of Daiei's turtle features.  A library in another county had a book called The Encyclopedia of Monsters—a treasure for a B-movie-loving kid—but ultimately the information I gleaned from it was depressing.  For in 1990, far moreso than now, just because a movie was made doesn't mean you might ever get to see it.

As a very stupid boy with liar parents, I still believed in Santa.  Instead of my customary wish for a Nintendo Entertainment System, at the top of my list were all of the Gamera films, the ones I had seen, and the ones I'd never seen.  Though aware, deep in my childish, not yet fully human brain, that many of these tapes were out of print—if they were ever released on tape in the first place!—I had faith in the magic of Christmas.

I probably shouldn't have, considering that in addition to being stupid I was also never very good, but I did.  And yet my Christmas morning haul began and ended with Gamera vs. Guiron.  In time, I was able to appreciate this as one of the better presents my parents ever gave me; at the moment, I buried my disappointment in a pan-and-scan VHS cassette of Gamera dancing go-go, amongst other jaw-droppingly inappropriate feats, and to the film's credit, the disappointment faded.

But along with it faded commitment to my mission.  "Fuck this," I might have said, had I then known the power of the F-bomb.  "Everything is pointless."  And thus my philosophy on life was complete, but that's a another story altogether.

It wasn't until whole decades later that I finally got to see the Gamera movies I was missing.  (And, technically, I still haven't seen the 1980 clip-show they made into a movie, Gamera: Super Monster, nor the failed mid-2000s threeboot of the franchise, Gamera: The Brave—but that is part of the fun of know-it-all retrospectives such as these.)  Presently, all are available in HD, with the Showa films out as of yesterday on what is shaping up to be a handsome pair of quadruple-feature (!) dual-layer blu-rays.  Unfortunately, special features amount to "none," though at $30 for all eight pictures, you still get more than what you pay for.  (And the Heisei films are even cheaper.)

Gareth Edwards' (highly-anticipated) Godzilla will be out soon, and the conversation is dominated by discussion of the king of all monsters and his many fine films.  But why not talk a little about the other green meat?

It's already the consensus that Gamera's well-plotted, ultraviolent Heisei trilogy is leagues better than Toho's muddled efforts in the 1990s.  But on the right day, like today, you could get me to say that the whole Gamera franchise is superior to its most direct competitor.  I've always had a great deal more affection for the movies that came after Gojira than Gojira itself—the ones that traded in national therapy for science fantasy entertainment.

And Gamera's Showa films are some of the most entertaining of the genre, through their sheer, unabashed childishness and, yes, goofiness.  But they are also, in their childishness, the most imaginative of the genre.  The kaiju might be silly, but they are boldly distinct.  The films they inhabit are colorful and surprising and, indeed, some of the weirdest shit you'll ever see in your life.

So let's watch some guys in rubber touch.  Thank you, won't you?
Posted by Hunter Allen at 9:42 PM