Cardboard Science: There seems to be a wind blowing in these willows 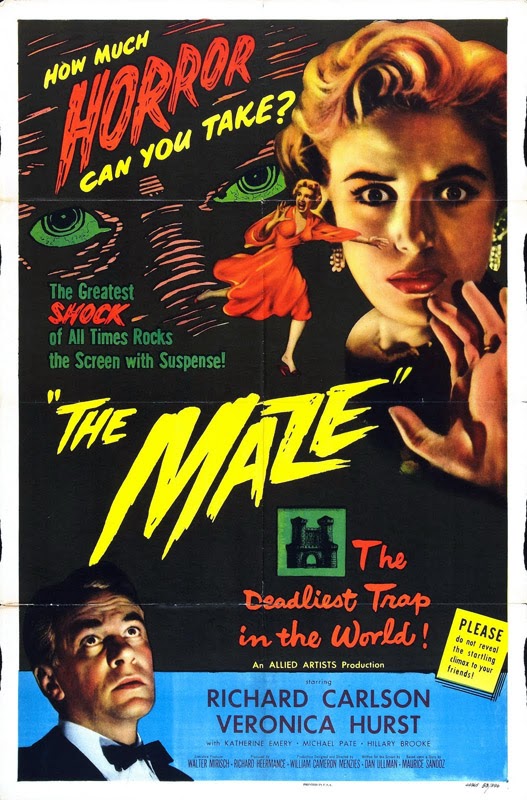 A soggy mush of a tale, that erupts into a climax so balls-out bonkers that I almost recommend it—but instead I recommend watching the first 20 minutes and the last 20 minutes and ignoring the middle 40.  I assure you that you will be in no manner lost, because that would require SOMETHING TO HAVE HAPPENED.

Spoiler alert: it would've been moderate, but it was just too hard, if not too pointless, to talk about The Maze without talking about its ending, so after the grade, a SPOILER SECTION begins 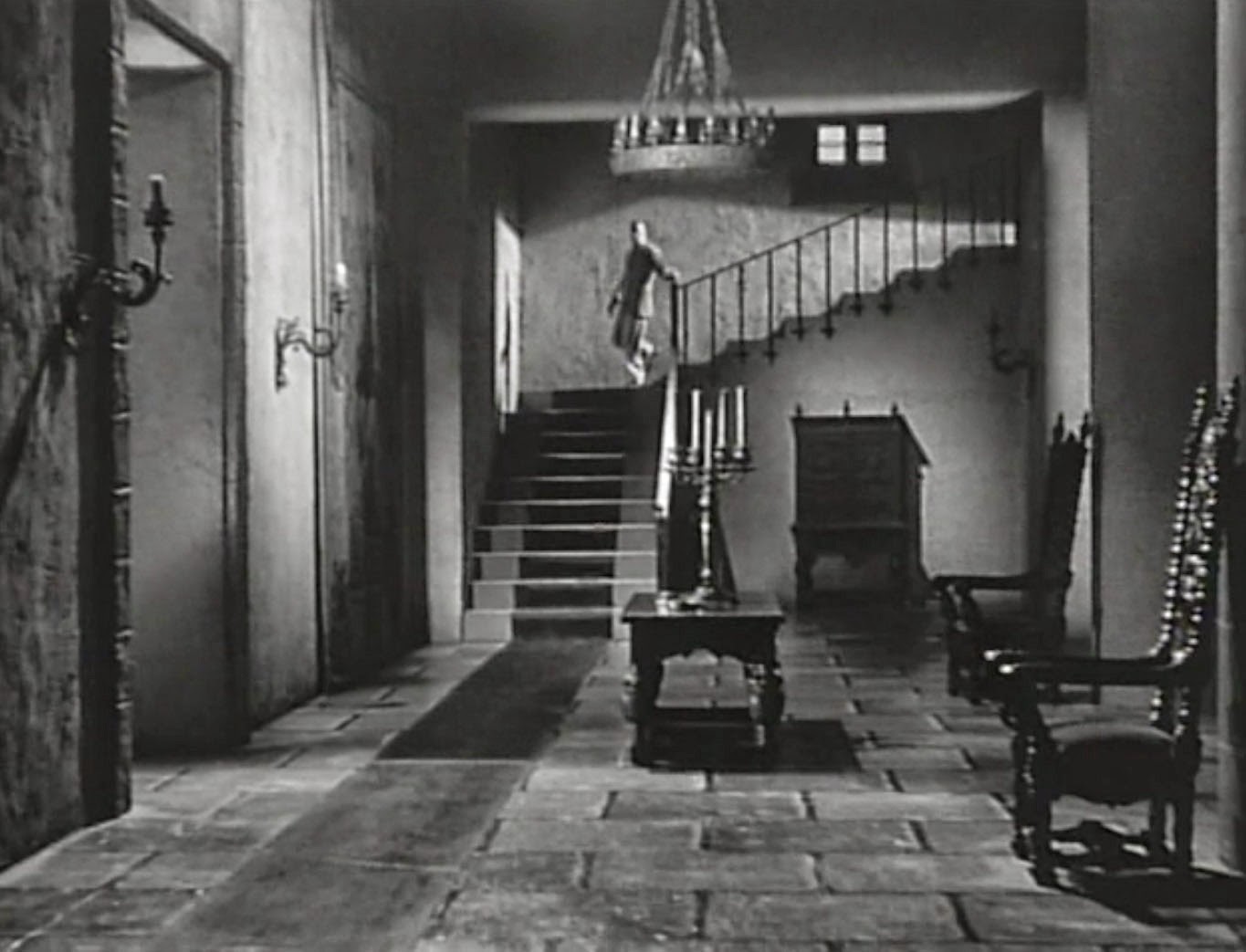 It was natural that my swoon over W.C. Menzies' work in the field of production design would branch out from the spectacle-driven fantasies where he made his name and into his obscurer efforts, of which there are a great very many.  Subsequent to Gone with the Wind, he began a long-term collaboration with Wind's shadow-director, Sam Wood, wherein Menzies effectively served as the director in terms of visual composition, though he was credited solely as the production designer (which his dual credit on his own work suggests was no demotion to him).  When this associated concluded, Menzies finally returned, in fits and starts, to explicitly directing films under his own name.  One of those—and, indeed, it is one of Menzies' least obscure—is Invaders From Mars.

And if there were ever a film where the epithet "cardboard science" were inescapable, Invaders is it, from the easily-punctured script to the bizarrely amateurish acting, and all the way down to the cheapjack production values themselves, that turn Menzies' always expressionist-influenced production design into the exact kind of movie that would have been made in Weimar Germany if Eastmancolor and sound reproduction technology had been invented, but it still took a wheelbarrow full of marks to buy so much as a two-by-four and a can of paint.

But I'm not here for Invaders.  Thanks to the old switcheroo and a crossing of the streams, that has become Brennan's job, so check that space for his recriminations against my person.  (Update: and the nays have it.)  For now, we turn our attention instead to Menzies' next film, his last feature before his death in 1957—we turn to The Maze.  And you will be compelled to wonder why we do so, at least within the defined bounds of the Cardboard Science series.  If you've never seen the film, but have read a synopsis, this is absolutely understandable.

The story revolves around the mystery of Gerald MacTeam, a Scottish nobleman with an American accent who is so distant from his roots that he barely remembers that he's the next in line to the Baronetcy of Craven—that is, until he receives word that his uncle, the current holder of the title, has died.  He's rather indifferent to the situation, since he barely knew the man, and in a scant two weeks he's supposed to be married to one Ms. Kitty Murray, but he accedes to return to Scotland to wrap up the affairs of the estate.

To Kitty's great consternation, as well as to the more measured scorn of her aunt Edith, a biddy, he never returns.  Weeks pass, but Kitty's patience is rewarded only with a letter breaking off the engagement.  Needing slightly more closure than Gerald's cryptic message, Kitty resolves to travel to Scotland herself.  She drags Edith with her, and the two bully their way into Gerald's castle, much to the chagrin of he and his creepy household servants, William and Robert.  She finds Gerald preternaturally aged, unwilling to speak to her for more than half a scene, and far less charming company for it.  Oh, and the castle has a maze. 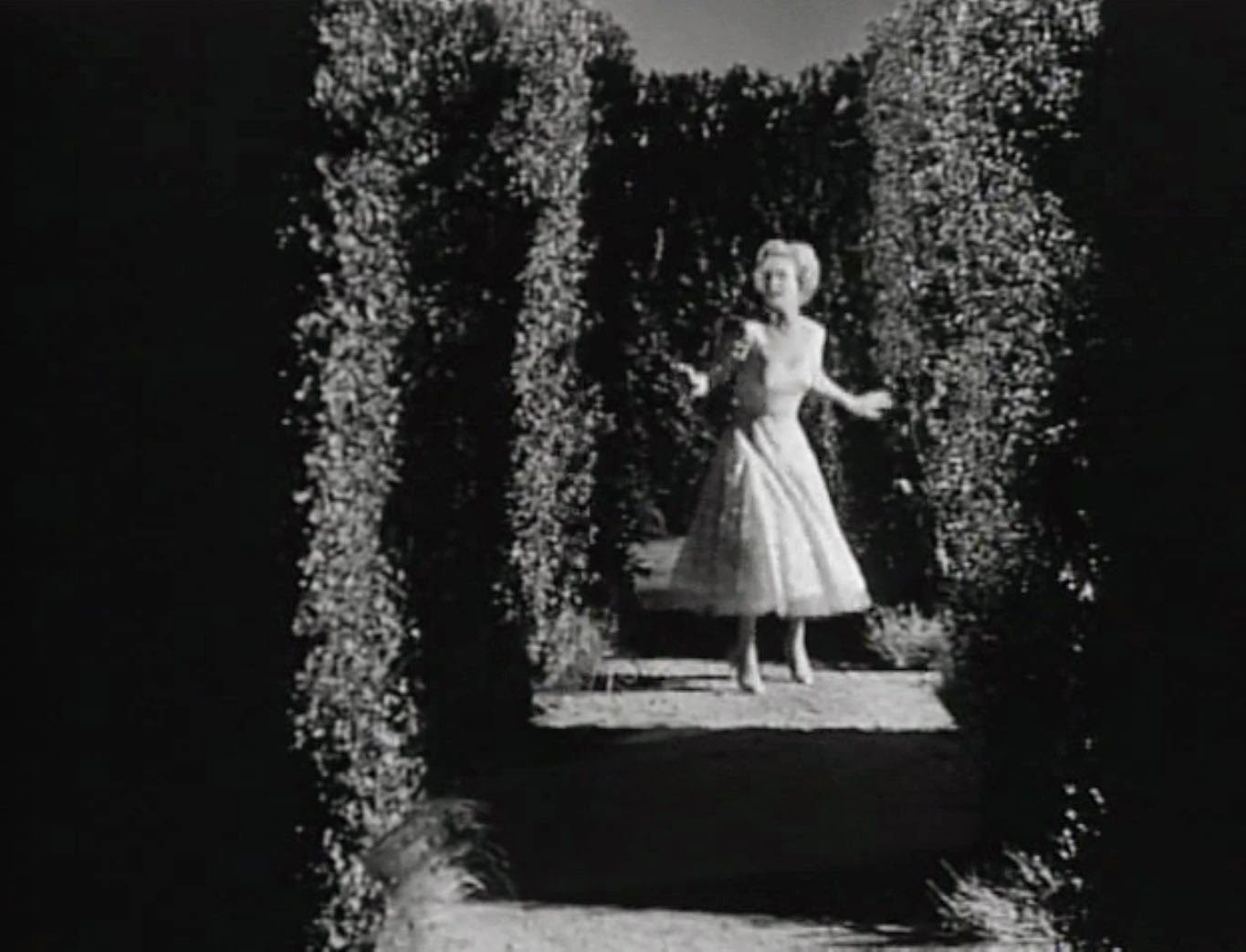 No, really!  And the heroine winds up kind-of lost in it for almost sixty seconds one night.  It's certainly not actionable fraud!

So what we have here seems to be, at best, a supernaturally-tinged mystery, and at very best one involving a minotaur.  Wikipedia's faceless sages describe it more accurately as "atmospheric horror," and the impression throughout almost the entire running time is of an extremely dry old dark house film, the genre that existed before hauntings were invented.  But believe me, I haven't brought it here just because Richard Carlson is in some scenes.  As I absolutely refuse to prematurely spoil this 61 year old B-movie, you will just have to take my word for it—for now—that The Maze is science fiction true. 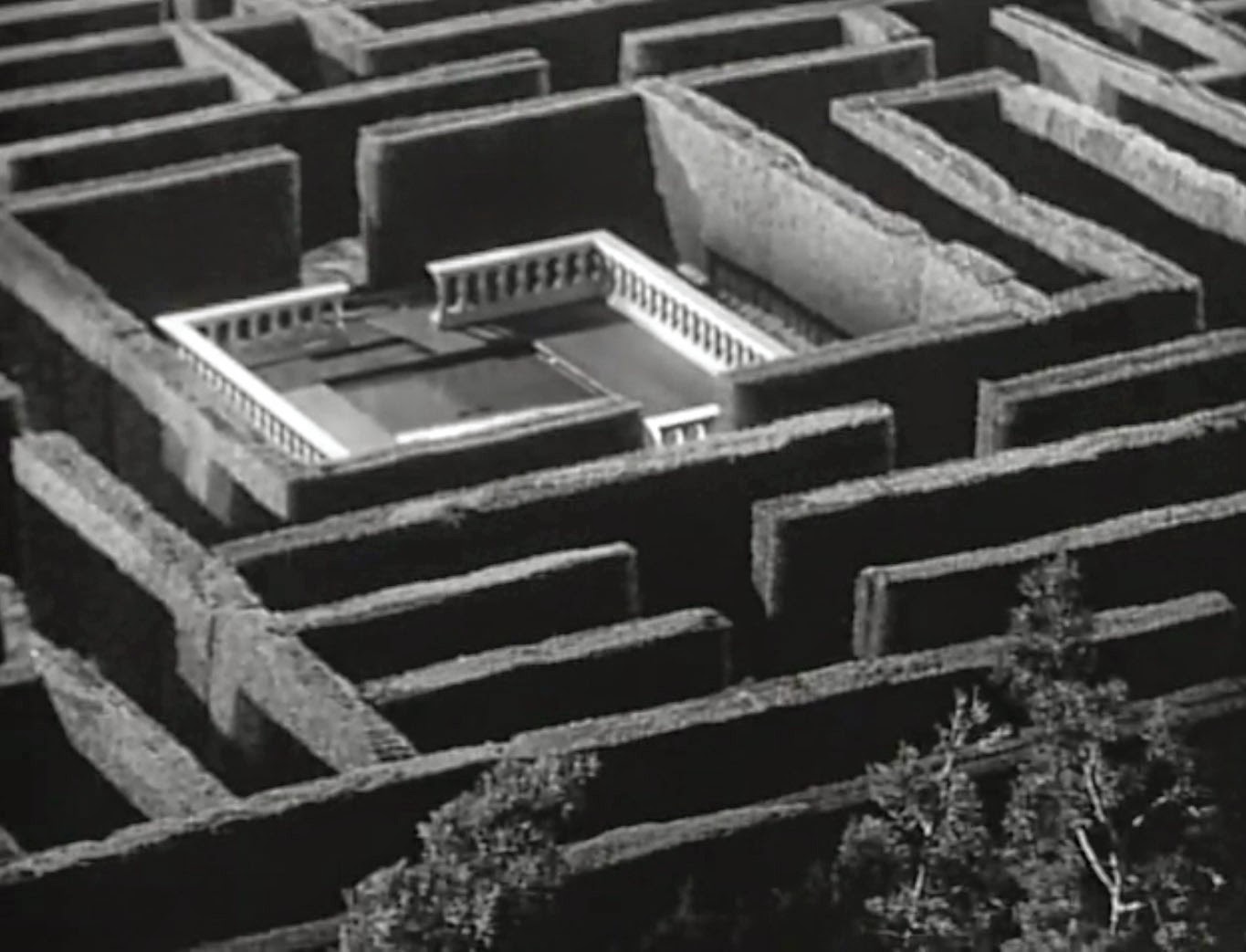 And it's not minotaur-related.  Well, not exactly.

As was the case with Invaders, Menzies' production design is stifled by budget constraints—Castle Craven must have been an ugly, threadbare place even when it was new—but he does more here with even less.  His direction, insofar as the pure image goes, can be striking.  Forbidding shadows and expressionist angularity give Maze the texture of a nightmarelike silent film.  It never winds up an especially affecting one, but this, as we'll see, is not the designer-director's fault.  At the least, Maze is immediately and satisfyingly identifiable as Menzies, with action often confined to a third of the frame, preferably the bottom third, and humans smashed into the edges by the weight of his architecture. 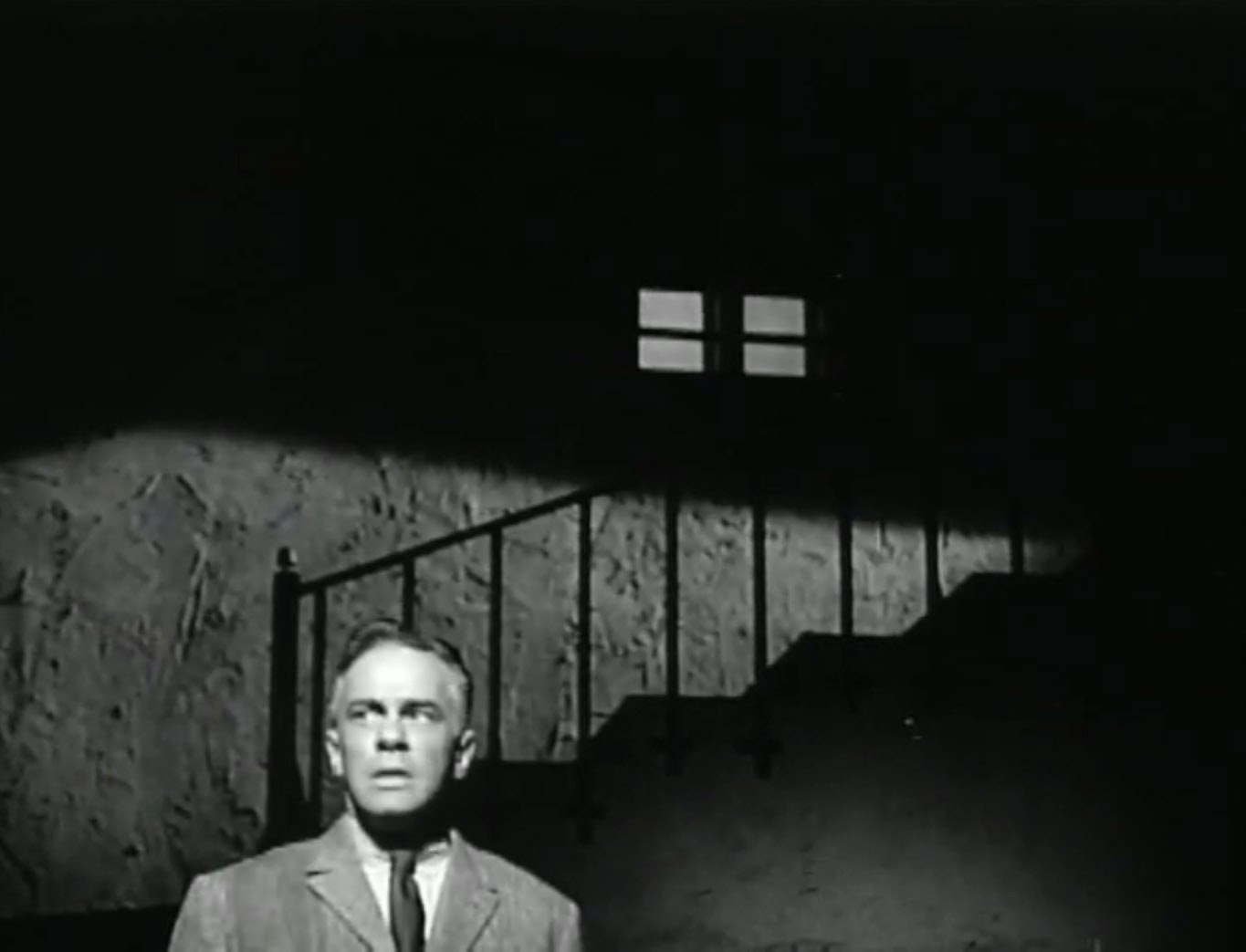 Richard Carlson searches for the rest of his torso.

It's a bit of a drag that the editing flourishes that are as much a signature of Menzies' style as his emphasis on set design and love of headspace are absent here.  It's true that the story in Maze would have hardly supported one of Menzies' brilliant hallucinatory montages, such as serve as Invaders' climax and open up the last act of Things to Come, but then again this story hardly supports anything at all.

That's because Maze's story is a catastrophic failure.  The insuperable problem is that its conflict is of the very lowest-key imaginable in a movie about a possibly-haunted castle.  Reversing the ordinary case of the heroes (or heroines) being leveraged or outright forced into staying on the premises, Gerald desperately wants his guests to depart, and while Gerald is as much of a dick as Richard Carlson can conjure up, if anything the impression is that Gerald is the one really being held captive. 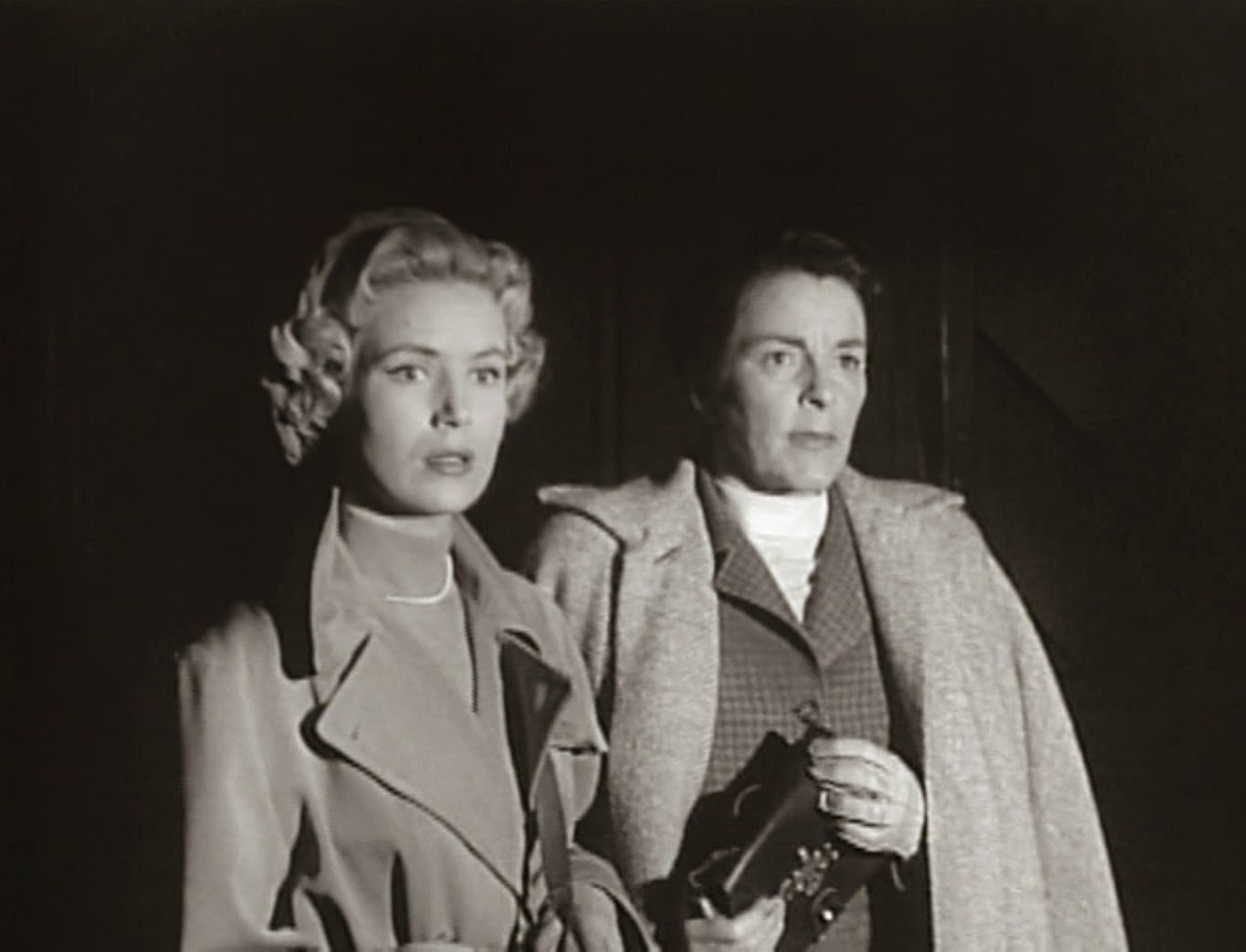 Sure, she looks afraid, but it's just her Nagging Cycle spinning up.

The film could be over at any point, should Gerald simply send one of his servants to fetch the constable and have his trespassers dispersed.  Though the mysterious nature of Gerald's abode has some inherent interest, the effect of his combination of reticence and rudeness is the precise opposite of tension—just how will Gerald fail to react to Kitty's obvious lies and emotional blackmail this time?  The world does not need to know, for it does not care.  The result is an extraordinarily flaccid and boring middle half, and it gets worse before it gets better when Kitty invites people over of her own volition, and Gerald's extremely mild inhospitality—which, again, does not entail throwing them bodily out of his own castle—causes their doctor friend to begin preparations to have him involuntarily committed for insanity.

The problems are not soothed by the performances.  Menzies was, in my experience, largely unconcerned with coaching his actors (indeed, in those essentially co-directorial collaborations with Sam Wood, this was apparently Wood's entire job).  It takes someone like a Raymond Massey to overcome this seeming limitation to Menzies' talent.  Veronica Hurst, whom we intuit lacks an IMDB picture for a reason, barely bothers trying, with her medium-sized, nearly-inflectionless performance, and this is not to the good of the film at all, since she's the protagonist.  Carlson can be counted on, of course, but it's not his best work.  As an actor with a rather retiring style anyway, he was unlikely to dominate like Massey did in Things to Come, and this is especially the case when Carlson is not only barely in the film, but defiantly cast against his type as the presumptively sinister master of Castle Craven.  The odd choice of male lead is a gamble that you'd never expect to pay off, yet the strangest thing of all is that it ultimately works, though it only barely functions until the very end.

As bloated and gassy as its midsection is, The Maze comes alive in its final quarter, when the castle's secret is revealed.  Before defining it in inescapably concrete terms, I'll simply say that, in the very specific form it takes, it is perhaps the single most absurd thing I have ever seen in a 1950s SF movie.

Actually, let's italicize that last part too: in a 1950s SF movie.

The ending almost succeeds in bodily rescuing an otherwise deathly dull film, and at least for its final reel we are delivered into the realm of the awesomely, wonderfully terrible.  This is reflected as pretty much a full letter grade jump from what I'd intended on giving it before minute 70 ticked over.  If you must know now—and I would not enthusiastically recommend watching this film just to find out—read on. 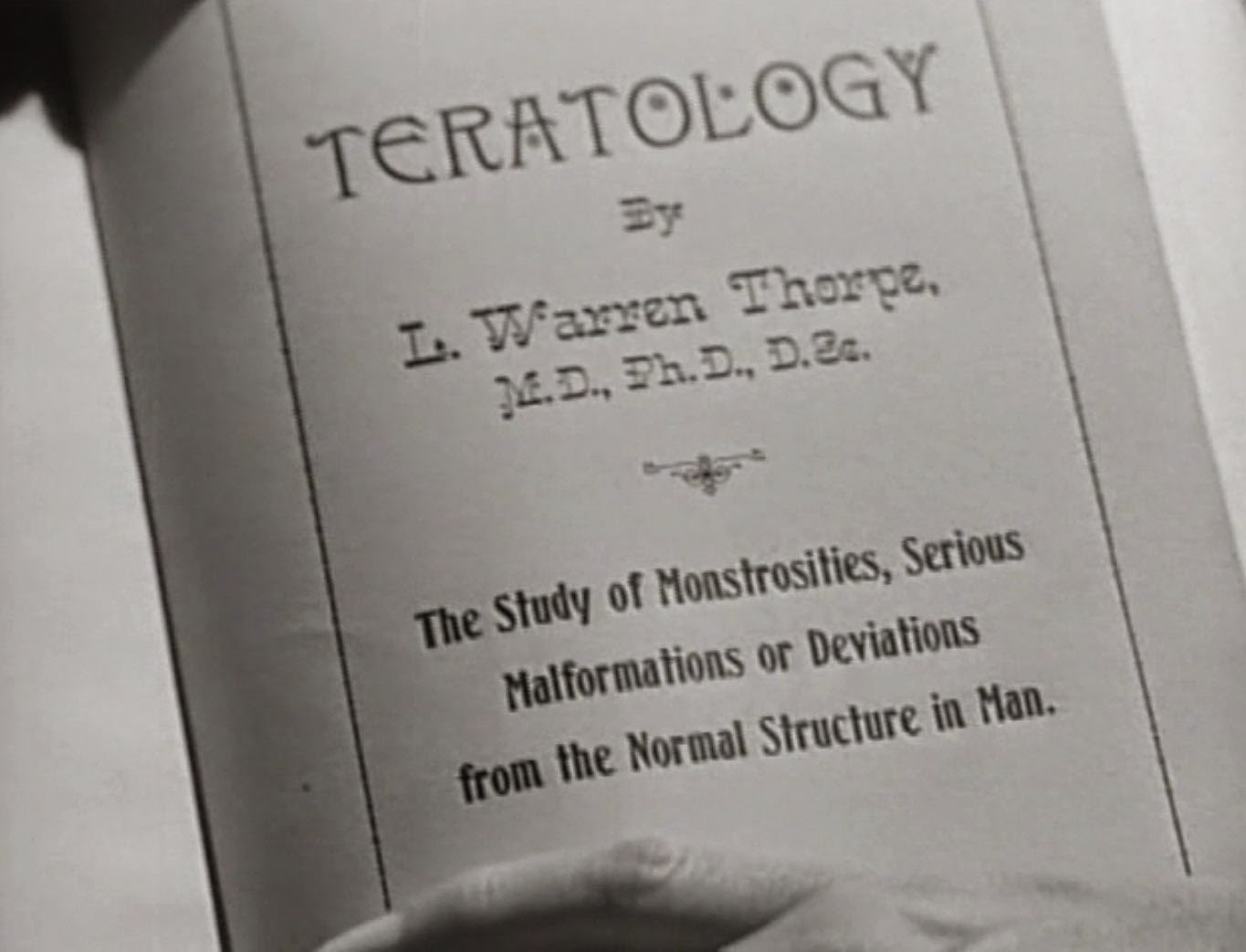 And the SPOILER SECTION begins here.  It is NOT minotaur-related.

So you must know?  Then know this: Gerald MacTeam is not the true Baronet of Craven.  The true ruler of this castle is an unseen figure who hides from the daylight.  He is functionally immortal.  He is a man driven mad by the curse which has haunted him for as long as he can remember.

Of course, this means that the Baronet of Craven is a giant frog. 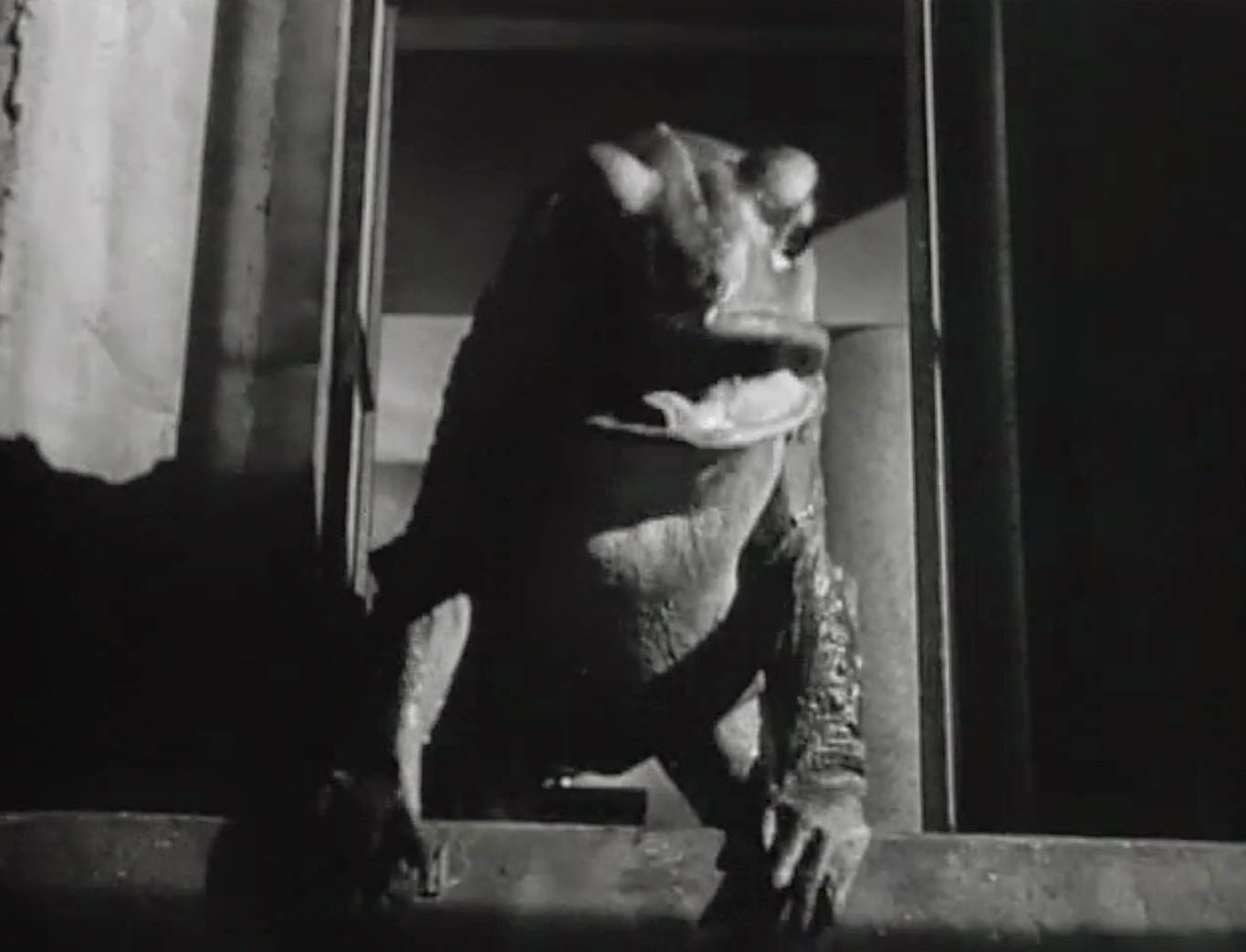 And now Richard Carlson's participation in this film begins to make even the slightest amount of sense, for he is playing who he was born to play, the sensitive science hero, who has dropped everything in order to Do What's Right, or something like that, masquerading as the Baronet just as his uncle did to conceal the existence of his great-great-great-great uncle, the real Baronet Craven, J. Thaddeus Mother Fucking Toad.

You see—and you will see, if you let Carlson explain it to you—the human embryo goes through many stages in its development, recapitulating the evolutionary history of life, before becoming fully human.  But the Baronet Craven's development stopped at the amphibian stage.  He has spent the past 200 years—for certain amphibians can live far longer than humans—trapped in the body of a beast, who thought he was a man.  He is not evil, and has claimed no victims, except for the wife of a caretaker many years ago, and more recently, a never-seen maid, both of whom simply expired of heart attacks upon sight of the Baronet; and you can imagine how it made him feel.  The title refers to the ancient noble's favorite place, a pond within the hedge maze, the only place where he felt at peace.  These words almost certainly cannot properly communicate how unforgettably silly this is in execution, especially when they toss a frog puppet from the tower, representing Baronet Craven's suicide.

In its essentials, this is kind of an awesome premise.  Even the ineffably daft specifics of a frog-man could have been made to work, if we were permitted more than Maze's glimpsing chance to be horrified and/or embarrassed by what is patently a man in a frog suit attempting to hop, but mainly just crawling around on bended knee.  Unfortunately, the AHA! NOW COMES SCIENCE! structure prohibits this.  Thus Carlson's infinite humanism winds up underused, not least because he's not actually a scientist; he appears to be in the very earliest stages of developing a knowledge base by which to assist his ancestor.  Worse, the endless stretches of film about the rather worthless heroine and her aunt are rendered all the more offensive, for we were watching them when we could have been watching Richard Carlson wrangle a melancholic amphibian, which sounds more like my idea of fun, anyway.