Now, this is bat country 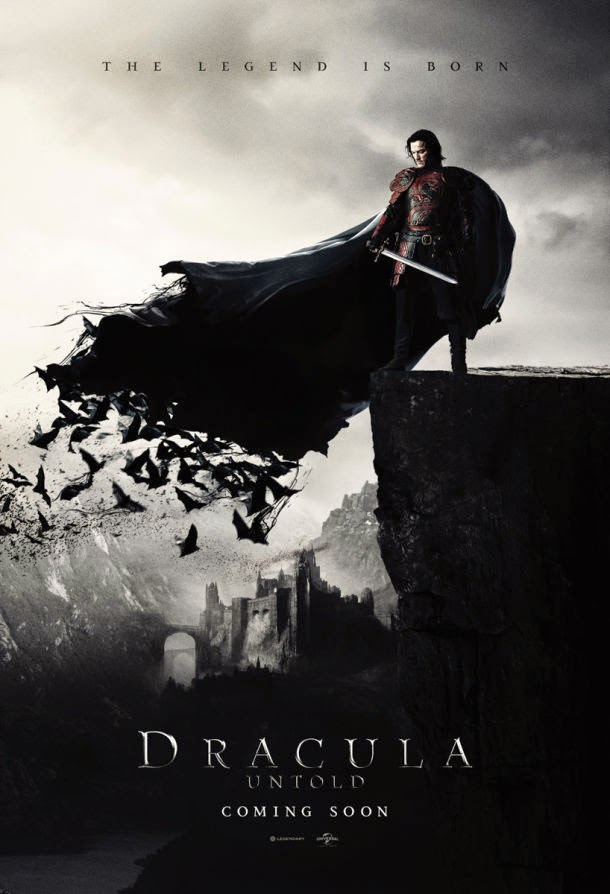 It's certainly better than Dracula, told by Tod Browning.  But that's not saying awfully much.

It is known that the best part of Francis Ford Coppola's Bram Stoker's Dracula is its radically-stylized, opulently-designed prologue.  So, the question follows: wouldn't it be great if they made a whole movie like that?  Yeah: if they made it like that.  Nevertheless, it's with a sense of shock and the fear of shaming that I write that Dracula Untold, while mercenary and flat, is not the offensively worthless thing that it probably ought to have been.  It is watchable, a step ahead of pure mediocrity, and if you found me in a charitable mood you might get me to describe the film in terms that were synonymous with "good."

I am not wholly in such a charitable mood right this second.

Gary Shore's desperate desire that you please do connect his film with FFC's BSD blares through in Untold's own prologue, a storybook sequence of frozen moments.  They depict the rise of a man described as the Impaler.  We see why, in the film's most arresting image.  That Untold's most legitimately interesting frame also comes in its first three minutes is a pity; but we are nonetheless forced to approve of Shore's shameless homage.  (However, more ridiculously interesting visuals await—not least the battle seen primarily in the reflection of a very, very shiny CGI sword, a gesture so ill-conceived yet so brazenly-executed that when I laughed, it wasn't out of mockery.)

The remainder of the film takes place on cloudy days or within a computer simulation of cloudy days, and thus it has that blue-and-gray palette I've never liked, but I've grown accustomed to—in any event, it is less aggressive here than elsewhere and it fits the dark, dirty, medieval-times aesthetic.  I'd prefer more red in my vampire movie, but, obviously, we can't have our vampire parading about in broad daylight, lest he sparkle.

Vlad Dracula (you may know the name) is a former royal hostage of the Ottomans; under their tutelage, he learned Turkish, combat, and cruelty.  He has been released and has assumed his birthright, the throne of the Principality of Wallachia.  He has found peace through faith—Vlad's avowed Christianity being a refreshing counterpoint to our post-modern world of vampires existing in a materialist vacuum.  This film was made in the 21st century, however, so Vlad's found even more solace in the bosom of his wife, Mirena, understandably so as Sarah Gadon is much prettier than Jesus.

Unfortunately, the aristocratic idyll Vlad has built on the backs of serfs is shattered when the Turks return and demand a new tribute: not just silver, but soldiers, including his own son.  Vlad revolts, slaying the Turkish messengers.  Sadly, he does not nail their hats to their heads, as in the semi-legendary tale.  He does cut them down with their own swords, in a sequence that doesn't quite belie the PG-13 rating—none of them do, and it's a big problem with this movie about a Dracula—but it does satisfactorily test its boundaries.

Did you like 300?  Did you think it would have been improved if there were more vampires and less bloodshed?

Vlad, fearsome warrior though he be, is nothing before the 100,000-strong force Sultan Mehmed II has raised to punish him.  But luckily for Vlad, in the first act he happened to find a monster in a mountain cave.  Vlad survived this encounter only by chance, yet he knows in his blood (ha ha) that this creature is his only hope.

The nature of this monster is related to Vlad via bald exposition, here voiced by a conveniently learned monk.  It is vampyr, he tells him—the undead!  Or something like that.  Thus we arrive immediately at the first problem in Untold's narrative: there should not be a solitary syllable of exposition about vampires in a movie called Dracula Untold, which by its very title promises the purest journey of terrifying discovery in vampire film history.  Instead, the Master just tells Vlad how it's going to be.

The icon of Dracula, within this film, is nearly fatally diminished by this bad decision; no longer is he the primordial evil abandoned by both God and Satan.  Untold fits him incongruously into the role of every other vampire in every other vampire movie: merely the next.  The "untold" part of Dracula, it turns out, is that he is being manipulated by an elder vampire, who—as is impressed upon the audience most unmistakably—shall reprise his role in the sequel, were such a sequel to come to exist.  (I remain agnostic on whether it should.)

It's a small change that might not seem to matter much in terms of structure, but matters a great deal in terms of resonance.  That the structure is also clumsy doesn't help; nor is it made one iota less awkward by the unexplained imprisonment of the Master, by forces unseen in this film.  Yet as clumsy and awkward as it is, perhaps it had to be, for Vlad must be the hero of this story, not its villain.

It's not exceptional at that, either.  Vlad's sole motivation is his family; unfortunately, Luke Evans and Sarah Gadon barely seem to recognize each other as people whose parts may fit together.  Meanwhile, his relationship with his son is better, but undernourished.  As there is nothing that really hammers home the awfulness of Vlad's own captivity at Adrianople, the commonplace medieval practice of handing over relatives as collateral remains something of a nebulous threat.  (Indeed, Radu the Handsome, the historical Vlad's historical brother and Prince Not-Appearing-In-This-Film, rather enjoyed his time at the Sultan's court.)  We can extrapolate, however—Vlad is mildly melancholic over all the people he's killed, and the Janissaries we see are more like machines made for glowering than humans, but whatever mostly-unseen pains the Turkish process holds, obviously it works pretty well in building the kind of supermen this film adulates.

This is not to throw the baby out with the boiling water—Charles Dance is immaculately good as Vlad's Master, a degenerate old beast resplendent in his pallid, half-rotted flesh, radiating bored, immortal menace.  They could have decided deep in post-production to make him the Devil after all, and you'd hardly tell the difference unless you have a technician's ear for looped dialogue.  The turning scene is one of the few references to actual horror in Untold, and it is rather good, with a touch of the old Ken Russell freakout upon it.  More of exactly this would have been most welcome.

Unfortunately, the Master is hardly seen again.  Untold situates itself instead in some kind of strange genre limbo: part horror, part historical biography, part grim low fantasy, and part superhero origin story that will be, I'm sure, lazily compared to Batman Begins.

Untold is most interesting when considered as a superhero tale, because it is the most forthrightly and unironically fascist one ever related on film, including Dredd, which is nominally a movie about explicit fascism.  This space is too small to discuss the broader context of fascism in the superhero genre; I'll simply say that it's a card that's been dramatically overplayed by weenies who don't like violence or inequalities, but (for some reason) continue to enjoy inherently violent narratives about objectively superior beings.  In Dracula Untold, however, the observation can't really be avoided.  Untold seeks to tell the tale of Dracula as a kind of a Christlike martyrdom that edges into authoritarian tragedy.

The rules of vampirism change every time they're told, so it's neither good nor bad that Vlad has a three-day trial period during which he can cancel his membership in the Nosferatu Club, needing only to refrain from drinking human blood.  Thus is the clock ticking for his besieged Principality.  But the filmmakers forget that it is unlikely that we have become overly invested in the fate of Wallachia, a country we know no longer exists, although this could be a mistake on my part, given that the audience Untold most favors seems to be composed of those who hold strong Romanian nationalist sentiments.

Regardless, they likewise forget that all of us everywhere on Earth know very well how this is going to end for Vlad himself.  Forgetting this, they don't realize that any conflict of dramatic weight must be found within Vlad, presumably one driven by the deadly temptations upon which his power is based.  Instead, we learn that power is not so much inherently corrupting as it is inherently awesome, especially if it's being wielded by a man possessed of the moral wisdom to know when turning a village into a forest of impaled corpses is the right thing to do, in the utilitarian sense.  (This is at least coherent.  The other obvious themes are ignored.  After all, addiction has never led to someone hurting those he loves.)  Vlad almost lashes out, once, at his own subjects, but this scene seems to exist solely so that the Prince can prove his moral superiority to the unwashed masses he rules.

Making it rain in was hard work in the 15th century.

The true antagonist of Untold is, in a blatant fashion that I've elected to find charming in its willingness to let this quasi-historical tale exist on its own terms, the Caliph himself.  We could criticize how Mehmed suddenly knows what a vampire is, but he could have easily read Anne Rice's whole library in the time he spends offscreen; reshaping the Sultan into a vampire hunter would have been subversive and weird, but I'm afraid we must pretend.  When he is finally seen again, Dominic Cooper is effective enough in the role of this latecoming Lex Luthor.  (We could also criticize how Cooper is back in brownface, but we know better.  His hair is, however, quite stupid.)

In all of its variegated modes, Untold is functional.  It is not much more: it's a film whose major points of inherent interest are that it gives its characters a period-accurate leave to hate Muslims, and that its own ideological underpinnings are deeply suspect, too.  But, as a time-waster, it's very close to not bad.  It contents itself principally with simply unfolding its story, and this is no crime.  If this story were just a bit more interestingly told, Dracula Untold might have been something to enthusiastically embrace.