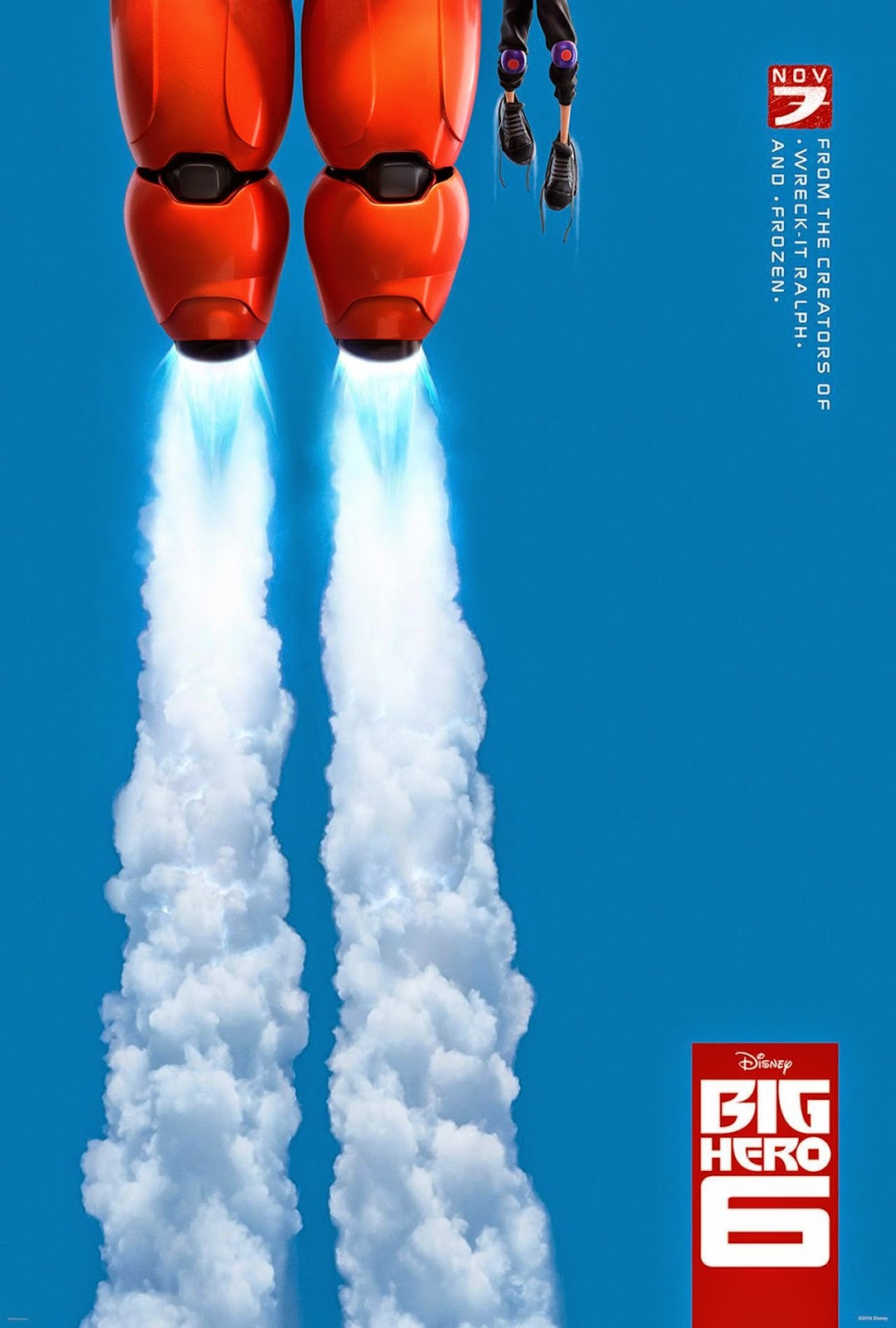 Big Hero 6 remains awfully sentimental for a movie that can be faithfully summarized, "a young scientist vows to kill the man who wronged him."  But Hero's sentimentality is the last aspect of the film I'd ever complain about.  It's sentimentality that gives it heft, even when the conclusion of its emotional arc could not be more foreordained—and I do trust, dear reader, that you're operating at a level of maturity that would preclude you from ever suspecting that the 54th Disney animated feature film is also the one where the protagonist sets out to murder the villain in cold blood, and actually achieves this goal.

As a work of animation, Hero is neither a step backwards nor forwards from Frozen, Wreck-it Ralph, and Tangled, but a step sideways: it's technically superb—the character animation is excellent—but rather than anything like those films' tantalizing and beautiful fantasy worlds, Hero primarily offers only a well-rendered, over-familiar, nearly-realistic urban environment, such as you might see if you went outside for a change.  Indeed, as much as Hero evidently takes place in the universe of Blade Runner, it's clearly some years after the economic recovery.  Our specific setting is San Fransokyo, 20XX, and what this means is a vaguely Japanamerican hybrid city that looks almost exactly like San Francisco—except now there is signage in various Asian languages.  (That said, I was so unreasonably thrilled by the lighter-than-air wind turbines that populate its skies that I turned to my companion and said, "Look!  Wind turbines!", and she agreed that they were, in fact, wind turbines.)

Hero is a superhero movie, of course, and superhero movies need no particularly inventive cityscape to function, insofar as the city is mere backdrop to the contest of titans in its streets.  However, its action content is only fine, seemingly eager to fully recapitulate the first issues of each of the dozens of team-based comic books I'd already read by the time I was ten.  If Big Hero 6 weren't as darned sweet and funny as it is... well, let's dive into the plot first, before we discuss the two things Hero does best of all.

Hero begins (naturally) with Hiro, a thirteen year-old high school graduate on the cusp of quasi-manhood, whose engineering genius has been squandered in backalley robot battles.  Rescuing him from the inevitable confrontation with the adult crooks he's been hustling is his older brother, Tadashi.  He's also an engineering genius, but he's enrolled in a university apparently officially named "Nerd School," and has directed his talents toward the greater good.  Tadashi brings Hiro into the fold, introducing him to a world of science that doesn't involve having your throat cut behind a convenience store.  Rather, it's a world of science that involves being blown the fuck to smithereens by an evil supervillain out to steal your cool invention.  In this case, it's Hiro's invention, a mind-controlled swarm of interlocking metal widgets called "microbots" that are met with a measured enthusiasm that is nowhere close to the near-religious awe their economy-destroying potential deserves.  Meanwhile, the one who gets blown to smithereens is Tadashi, because Tadashi isn't the emotionally volatile protagonist in need of a heaping helping of narratively-satisfying personal growth.  But here to assist Hiro in that department is his brother's left-behind project: a healthcare robot he dubbed Baymax.

Baymax represents a faintly-sapient conscience of sorts to Hiro, but more importantly it's just really, really funny. For starters, its inflatable vinyl construction is a source of neverending gags that play pretty transparently as a type of flatulence.  But since the robot lacks both shame and any messy biological associations, Baymax advances the form to a sublime abstraction of its basic elements, timing and noise, making Big Hero 6 the Piet Mondrian of fart jokes.  I only hope I'm not doing the film a serious disservice when I say that fart jokes are the best it has to offer, because they are genuinely great.

Baymax is funny in many other modes besides pooting.  Its portly, ponderous nature offers many opportunities for very funny fat jokes that aren't fat jokes, as well.  Likewise, the filmmakers have taken every last Robots Don't Understand Real People joke made between Forbidden Planet and the series finale of Star Trek: The Next Generation, cramming them all into a 108 minute runtime; this also is a positive good.  I only found myself discomfited by their zeal to repackage a whole century's worth of fallen comedy when they raided the dusty archives for its wino jokes, too.  Out of context with anything else, the equation of Baymax' low-battery state with classic inebriation is reliably amusing; but they broke the concept when they forgot that in context, Baymax is a largely-emotionless robot and probably not so terribly prone to the antics of a town drunk.

Hiro has little time for Baymax' physical shortcomings and wimpy programming, so he does what he does best: turn a tool to improve the human condition into a weapon.  He induces Tadashi's friends to do the same, if not quite with their full awareness, and thus a superhero team is born.  It's a nicely diverse one at that, and a most enjoyable ensemble of three-note characters to boot (counting each one's superpower as a "note," as those charitably inclined toward the genre are obliged to do).  In order of how much I liked them, they are: Lemon Honey, a sweet/excitable white gal, who throws task-specific chemical compunds; Wasabi, a personable/cautious black guy, with rad laser knives; and Go-Go, a condescending/driven Asian gal, who's built an exoskeleton that turns her into a super-speedster (and who also proves that the phrase "woman up" is just as unpleasantly stupid as its more widely-spoken spear equivalent).  They're also joined by the most cleverly-resurrected comedy trope of all, the unflattering stereotype of the Other, except this time the Other is a white guy, named Fred.  He builds nothing of his own because he's dumb as a sack of rocks, and that sack is also full of privilege.  And marijuana, although this is not made 100% clear in the film.

As will fail to shock anyone, even those who didn't read my opening paragraph, Hero soon becomes a morality play about the hollowness of revenge.  Unfortunately, it's one unwilling to completely sacrifice its bog-standard superheroic showdown to the healer's ethos as represented by Baymax.  Witnessing the end of Big Hero 6 is witnessing, in real time, a development meeting absolutely fail to come to a consensus.  It's never pleasing to see a movie that so obviously ends more than once—and not in that Return of the King way, where things just keep happening until the sun gets old and fat and red, but in the very specific way Hero concludes, then concludes again.  (The last time I saw it happen was Birdman, also written by a mess of people, and even there it's not half so clean-cut.)

The two competing and largely incompatible visions of Hero's ending we get must have already done mighty battle many times in Disney's boardrooms.  The first is a traditional brute-force-and-tactical-epiphany solution to a superheroic problem, resolutely adequate if uninspired, geared toward those who have engaged with the climactic action.  The second is a far kinder redemptive ending, made for the sensitive soul, where the villain can only be defeated by giving him the only thing he really wants.  Since no decision was ever reached as to which was better (one is so obviously better it hurts), both of these endings actually occur in the movie, one after the other.  The end result is probably superior to just another schematic tale of superheroes learning to fight, but it remains only barely satisfactory—and it's so much more clearly jerry-rigged than either ending would have been alone that if you do see the conflict behind the screen, it may yank you right out of what's happening within it.

Nonetheless, sentimentality does win out in the very end—the closing sequence is both absolutely predictable and absolutely heartwarming—so Hero can't be accused of true failure on any level at all.  Heck, on its merits as an experimental comedy alone, it'd be worth recommending.  Its only sin is that it actively flirts with greatness, only to shrug and walk away.  And that's less a deadly sin than it is just a frustrating one.

But: could it have won greatness back, had it featured some showstopping musical numbers?  Now that's a rhetorical question if I've ever posed one.

P.S.: "Feast," the flat-animated short preceding the film, keeps making me pine for a whole film done in "Paperman" technology.  It also made me cry, so there's that.  (Score, for what it is: 9/10.)
Posted by Hunter Allen at 6:11 PM