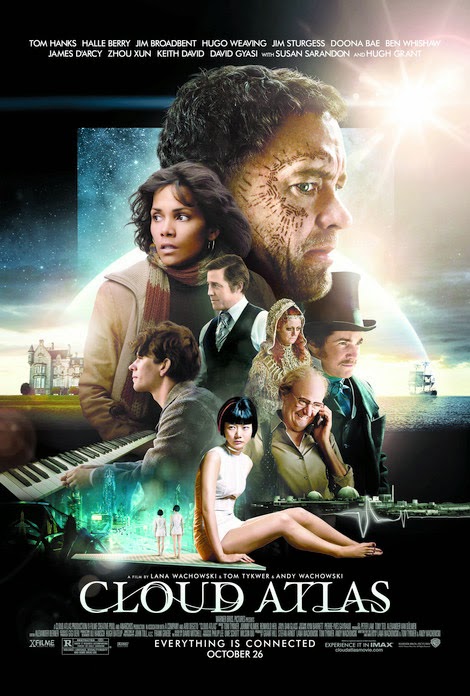 First things first.  Cloud Atlas, its title referring directly to an in-universe work, the Cloud Atlas Sextet, has pretty much the best name ever.  It's the single most evocatively poetic title a movie's had since, well, I don't even know.  Maybe it's too much to credit the film for this, since—after all—it's based on the famous novel of the same name.  The genius of it is that it's just as descriptive as it is lyrical: Cloud Atlas maps the lives of maybe as many as fifty people, representing over a dozen transmigrating souls, over the course of 400 years.  Or 4000, or 40,000—it gets a little hazy toward the end.

To break that down, Atlas is a cross-cut collection of six thematically and very-occasionally narratively interlocking stories: in 1849, it is the story of Adam Ewing, Esq., (Sturgess) undertaking a harrowing voyage from San Francisco to New Zealand and back; in 1936, of Robert Frobisher (Whishaw), who takes a leave of absence from his Cambridge boyfriend Rufus Sixsmith (D'Arcy) to become the scribe of the great Scottish composer Vyvyan Ayrs (Broadbent); in 1973, of Luisa Rey (Berry), a San Francisco reporter who through a chance encounter with the now-older Sixsmith becomes entangled in a conspiracy to blow up a nuclear power plant hatched by Big Oil operative Lloyd Hooks (Grant); in 2012, of Timothy Cavendish (Broadbent), a London book publisher tricked into committing himself to an old folks' home by his devious, vengeful brother Denholme (Grant); in 2144, of Sonmi-351 (Dae), a Fabricant achieving consciousness in Neo-Seoul and positioned as a revolutionary messiah by a mysterious warrior-radical (Sturgess); and—finally—in the 106th year after The Fall, of Zachry (Hanks), a post-apocalyptic savage on a forgotten island who faces the trebled evils of a cannibal warlord (Grant), the hallucinated devil Old Georgie (Weaving, natch), and the collapse of his xenophobic belief system brought on by the arrival of Meronym (Berry), the representative of a rebuilt human society.  Oh, and the film is bookended by two more scenes with Zachry, that take place 50 or so years after that.

The core group of thirteen actors (I think—apologies if I missed anyone) recur throughout the six tales.  They're often playing against type (in 2012, Hanks is a grotesquely orange gangster who throws a man off a roof in a fit of pique), often playing against race (in 2144, Sturgess is one of several actors in horrorshow forehead prosthetics that make them look less like East Asians than really problematic Star Trek aliens), and sometimes even against biological sex (in 2012, Weaving plays Nurse Ratched).

The makeup used to achieve these transformations, obviously, varies wildly in quality.  In terms of raceface, not a single white actor in 2144 looks anything less than terrifying.  The streak gets broken only by a black actor, David, who merely looks goofy.  Meanwhile, Berry as a German Jew in 1936 is basically flawless.  In the middle, we have Bae playing an Anglo-Celt in 1849.  While her accoutrements render her a little weird-looking—and even more doll-like than her biorobotic character in 2144—it is surely accomplished effectively.  In terms of presented gender, Weaving's male-to-female role is the only switcheroo with any serious screentime, and is a cartoon villain played strictly for her threatening, masculine quality.  Now, I ain't telling the Wachowskis what's on and off message, but...  (Conversely, Whishaw is mostly invisible in his female role, but the role is mostly invisible in the movie.)  Meanwhile, even when actors maintain their race and gender, distractions crop up; e.g., 1973's vision of a tow-headed Tom Hanks.  Yikes.

Anyway, though technical marvels coexist uneasily with grievous technical oopsies, it's easy to eventually settle into the physical realization of the recurrence.  (Opinions can and have differed.)  Even if it didn't work as well as it did, though, I would have hated it if they hadn't tried.  The actors taking up such far-afield roles throughout the grand sweep of Atlas' aggregated epic is, perhaps, my single favorite thing about the film.

My touchstone here is the book The Years of Rice and Salt.  The crucial difference is that although both treat reincarnation as fundamentally real, Atlas operates without Salt's more coherent conception of it.  (By information and belief, the conceit is not present at all in Cloud Atlas, the novel.  Whereas it barely qualifies as an "interpretation" of the movie, rather than a mere statement of its text.)  What we witness in Atlas is the vaguely samsaric journey of thirteen different katras down the ages, experiencing very different lives—and evicincing radically different personalities.  On one hand, the lack of many identifying traits between Hanks, the venal gangster, Hanks, the saintly physicist, and Hanks, the schizophrenic tribesman—other than Hanks' physicality itself—is a glaring example of Atlas' widely-touted messiness.  But, if the recurring actors are to have a point—and I really damned well need them to, as otherwise it's a bizarre and terrible gimmick—the point is this:

It is almost never free will, but circumstance, that determines the course of human existence.  But sometimes—so rarely they made this movie about it—it is our choices that change history.  With superhuman clarity and sense of purpose, we can rise above the order of things that we take for granted, and choose good instead of evil.  (Unless, of course, you're Hugo Weaving—or, oddly, Hugh Grant.)

Actually, I know this is the point, because the film tells me so.  It's not a nuanced film, which is to be expected because it's not from nuanced filmmakers.

But subtlety is for soft-spoken losers without the courage of their convictions, anyway.  Before any other function, Cloud Atlas is a beautiful social melodrama.  Even the most withered heart might beat again, as sacrifices are made, and victory recedes from sight, only to be snatched from the jaws of defeat in the breathtaking 40 minute crescendo of Atlas' visual symphony.

That is, assuming they can find a way to approach this monument of a film in the first place.  Seven minutes shy of three hours long, Atlas presents an intimidating edifice.  Of course, in our dystopian world of grotesquely bloated blockbusters, can Atlas really be described as out of step with the times?  Damn right it can: Atlas is six separate short films brilliantly mixed together in order to continually rejuvenate the attention span, and it soon achieves unstoppable momentum.  As an exercise in pacing, Atlas keeps pretty rarefied company; though I can think of many films even longer that are better, it's difficult to think of any film of similar length that is as fast.  (Only one comes to mind, Watchmen, not-coincidentally sharing Atlas' delightful obsession with match cutting and other forms of too-clever segue.)  Thus, any objection of the populist entertainment-whore—that is, yours truly—must not be found in the runtime or the construction, but in the content.  (And apropos of nothing but I just need to say it, co-director Tom Tykwer's composition of the titular sextet, with Reinhold Heil, Johnny Kilmek, and Gene Pritsker, is totally boss.)

On one hand, Atlas offers a little something for everyone to enjoy: two olden-times period pieces, one newer-times period piece, two science fiction stories in two different SF subgenres, a romance, a paranoid thriller, a melodrama that—thanks to a well-placed reference in a chronologically-subsequent story—becomes a paranoid thriller, and even a Goddamned comedy.  On the other hand, Atlas also offers a little something for everyone to actively dislike.  Just about any viewer is bound to find one or more of the stories not entirely to their taste.

The goal, I think, was that every story could have been its own successful film.  This is very nearly true, and as miraculous as that is, it does mean that a bad apple contaminates the rest just as easily as five strong stories uplift their weaker partner.  Sadly, the one that is arguably the most important is also, easily, the worst.  It informs the next story at an absolutely foundational level.  It is also the Wachowskis' stage, from which they can address their themes directly toward the audience.  Perhaps this is a favorite device of  Tykwer's as well, but I wouldn't know.  Besides, although the three directors were intimately involved with the whole project, this story is the siblings' show.

The problem is that 2144 is Blade Runner.  Not a riff on Blade Runner, just Blade Runner, albeit with a slightly different plot.  It therefore embodies every conceptual problem Runner ever had—and there are a few—turned up to 11.  Then it adds bad yellowface.  And kung fu.  And the Asylum Films iteration of the lightbike sequence from TRON: Legacy.  If stood alone, 2144 would be lucky to get a "B."  (And yet: it's still beautifully acted, even affecting, and honestly I don't know if I would ever trade away the ghastly spectacle of what happens to the Fabricants once they've reached the end of their service lives.  But the action is frankly the stalest of the bunch, while it also suffers quite obviously from space constraints, just barely capable of delivering its protagonist a full arc.)

Meanwhile, the way the stories interact with one another can be suspect, too.  Sometimes themes and motifs get almost completely lost in all the genre-bending.  Mostly, my complaints on this count are so negligible I don't even think they're worth voicing.

Then there's 2012.  Really quite a lot of fun in and of itself, it is also so tremendously variant in tone from the rest of a really po-faced motion picture that it feels, if not altogether unwanted, then nonetheless alien to all the other, deadly-serious goings-on.  The stakes and metaphorical import of the piece militate equally strongly for its inclusion, but the stakes and import wind up played almost completely for laughs.  And, somehow, in a movie where racism is treated as the deadliest sickness to ever afflict the human condition, 2012 ends by celebrating nationalism in a way that would be gross in any movie, but especially in this one.

Oh, but that's so much criticism of such a wonderful film.  My very favorite of Atlas' stories is, inevitably, also the one most clearly favored by the Wachowskis' touch.  Presumably, it's the reason 2144 is so creatively bankrupt—the Wachowskis' spent all their imagination conceiving the much farther future of 106 years after the Fall.

There's practically nothing about the post-Fall world that I don't love: the arbitrarily radioactive forbidden zones and the cross-country adventure they permit; the most solid makeup work of the film; the provocative contrast between the white-clad technological splendor of the black superpeople from the mainland and the Bronze Age crapulence of the island's barbaric Caucasian morons; the pre-modern psychology of Zachry that compels him to imagine a literal devil constantly hovering over his shoulder; and seriously, Hugh Grant makes an awesome cannibal.

But above all do I admire the bravery it took to conceive a futuristic tale that recognizes the realities of language.  Either famously or infamously, depending on who's talking, the post-Fall story is performed in a thickly-accented dialect that is as far from English as the filmmakers felt they could get away with—without subtitles.  Hence: "the true-true."  It makes me so happy I could shit myself.  It's also a great story, well-told.  Of course, as the most Hanks-centric of the bunch, it is by definition the best-acted of them all, too.

Zachry and Meronym return in the even-farther-future closing sequence; and that is when I just lost it.  In the end, everything that everyone did mattered.  Wouldn't it be sweet, if that were true?  Cloud Atlas lets you believe it, not for too long, but for long enough to remember how it felt to cheat Old Georgie of his due.  And that is a beautiful thing.