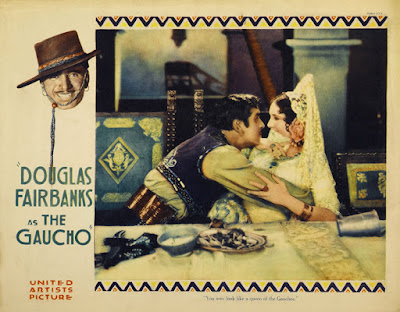 After a break, somewhat justified by a hard-to-get-ahold-of DVD, we at last return to the ongoing adventures of Douglas Fairbanks.  Would that the film itself were especially good. 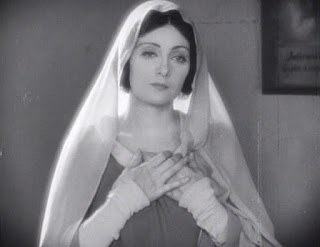 A while back, we discussed the holy grail of silent cinema, something I wasn't sure existed: the true mediocrity, a film that was always basically watchable—while never actually becoming particularly interesting.  Obviously, such films absolutely abound in the cinema of sound; however—although my data points are of course far fewer—I had never previously seen a silent film that I could have rightly called "mediocre," for the nature of the form makes it awfully hard for a movie to remain watchable if it's not also advancing compelling enough material to be described as "good."  Now, I'd gotten close before, and not that long ago; it was in the course of this retrospective upon Douglas Fairbanks' swashbucklers that we dealt with Don Q, Son of Zorro.  Plodding along with inordinate aimlessness before finally getting to the great parts, if it hadn't traded so heavily upon its significantly better predecessor, The Mark of Zorro, it would've easily fallen into the abyss of the outrightly bad; and as it stands, it's very close to that mediocrity I sought.

But now, we arrive at a far purer strain: a film that manages to hold the attention without ever commanding it for more than a few moments at a time, Fairbanks' much-inferior follow-up to the spectacular Black Pirate; namely, The Gaucho.  And it's ever-so-slightly on-the-nose to call it a "holy grail," since its plot turns (however awkwardly) around divine waters that heal wounds and sickness—and, more generally, around the idea of faith as the balm of the body and the soul.  It is therefore a little bit offensive—sure, as a metaphor, it's certainly sound enough, but dig any deeper than its nominally-uplifting surfaces, and you'll realize that as any kind of theological document, it's essentially garbage.  Yet the qualms that any viewer should have about prayer-based medicine are immediately eclipsed by the film's bizarre refusal to engage with its own conceit on any level but a metaphor.  It's a refusal that hollows out the adventure of this adventure film, and leaves only a somewhat stupid parable that deliberately (and very, very frustratingly) ignores all the world-changing magic sitting at the heart of its story.

In Ecuador, or something, we find a young shepherdess.  As she minds her flock, a wayward ewe and a misplaced foot send her spiraling over a precipice and onto the unforgiving rocks below.  But lo! her arm splashes into the waters of a spring, and a vision of the Virgin appears to mend her broken body.  Local villagers soon arrive, attracted by the miracle.  A baby is healed of its illness; the blessed magic of the place is thus confirmed.  Ten years go by: the shepherdess grows into a woman, and a whole city grows around the spring.  It is called the City of the Miracle.  And it is rich with the offerings of all who come to be healed by the waters of its shrine.  But not all is well in Ecuador, or wherever; an usurper, named Ruiz, has seized power.  He has sent his troops to occupy the City of the Miracle and loot their wealth.

Meanwhile, there is also a gaucho—the Gaucho, in fact—an outlaw horseman at the head of a veritable army of bandits, making his way through the Andes; we catch up with him in a mountainside town, and learn of the 10,000 peso bounty on his head, which I'm not sure was even that much money back whenever this movie is supposed to take place.  (The gauzy fabulism that defines The Gaucho prohibits pinning it down to any period more specific than "at some point after whichever country this is supposed to be finally won its independence from Spain.")

The Gaucho and his men make merry in the town; and the Gaucho himself makes the acquaintance of his biggest fan, a mountain woman with a fiery spirit, an unexamined violent jealousy, and a clinginess which we are meant to interpret as devoted love.  When the Gaucho learns of the City of the Miracle, he and his men make plans to liberate it from the military tyrant; but upon arriving and dispensing with Ruiz' incompetent guardians, the Gaucho proves himself only slightly more ginger in his temperament when he feasts upon the city's wealth.  Though the girl of the shrine bears his leering posture with saintly grace, he loses her respect upon running afoul of a leper who has refused the healing power of the shrine because his livelihood is bound up in the alms he receives for his sickness.  When the leper is brought before him, the Gaucho tells this "victim of the black doom" that he simply should go find a quiet place to kill himself. 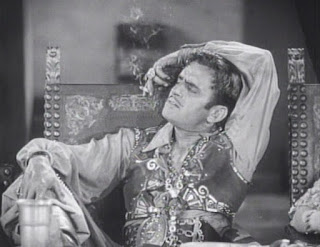 Bear in mind that before the Internet was invented, this kind of behavior was considered inappropriate.

Unfortunately for the Gaucho, this is not the end of his interaction with the leper, for the cursed beggar gets his revenge by infecting him and throwing the Gaucho's own poison words right back in his face.  This, of course, leads to the Gaucho coming face-to-face with a spiritual crisis, which is incredibly easily resolved under the beatific guidance of the girl of the shrine, and through the fact that he's literally sitting right next to a Goddamned magic fountain with the power to cure him if only he believes.  Nevertheless, things are complicated by Ruiz' determination to retake the city, as well as by the mountain girl's jealousies, which erupt into full betrayal.  But the solution to all these problems involves jumping and climbing upon the impressive sets from which art director Carl Oscar Borg has built this particular Miraculous City, and no Douglas Fairbanks character yet has failed to jump and climb on shit with aplomb.

So: in The Gaucho's foundation rests an obvious and completely insuperable problem, and this problem is its insane refusal to give the very first shit about its amazing premise unless its amazing premise directly impacts the Gaucho's moral arc.  It is impossible to go through this film and not be dumbstruck by how blithely the film treats the City of the Miracle.  Based on the miracles reputed to accrue to the waters of the similar spring at Our Lady of Lourdes in France, the big difference between this Marian shrine and that other one is that this one fucking works and everybody knows it.

Therefore, one is left positively bewildered by the City's apparent lack of worldwide reknown—and, even moreso, by the striking banality of the characters' motivations regarding this monumental, earth-shaking discovery.  It's like a version of Lost Horizon, where Shangri-La's existence is known to all humanity and its legendary promise of youth is well-attested by all, but everyone treats it like nothing but a tourist trap; or it's like a version of Indiana Jones and the Last Crusade where the Nazis' goal is to ransack the Grail Chamber, but only for the melt value of all the False Grails.  The dissonance between the viewer's reaction to this literal miracle and the film's indifference for it means that The Gaucho fails completely as a fairy tale—which needn't be precisely literal, but is obligated to have a sense of wonder.  Thus, the film stumbles down a mountain and never really climbs back up. 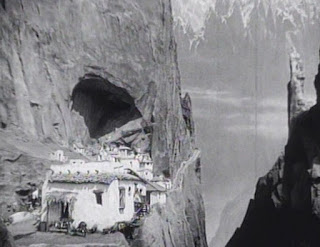 And speaking of which, it doesn't help one bit that our time in The Gaucho's gorgeously exaggerated cartoon version of the Andes—the best-designed stuff in the film—is limited to naught but a fraction of the first act.

Anyway, The Gaucho's unwillingness to deal with the literal ramifications of its miracle actually hurts it as an allegory, too: the shrine might not work without faith, but faith really isn't that hard to come by when you're dealing with a physical phenomenon whose existence has been confirmed by repeated experiment.  And this nettlesome problem comes entwined with the essential crappiness of the idea: or can you explain to me why God would carve out a special place amidst the world He created, where the horrific laws of nature that He set down eons ago would not apply? 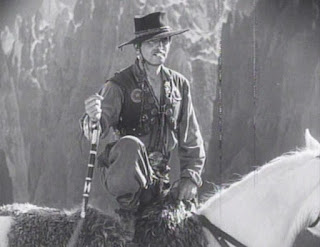 Is it because God likes adventure narratives?  Truly, we are created in His image!

And, yes, it's the kind of thing that works perfectly well as a maguffin (just look at any Indy movie, including the one referenced above—which is, in fact, brilliant in a way I didn't notice till just now, thanks to The Gaucho; the irony of The Last Crusade is that God has recognized that nobody with the desire to take the Grail actually deserves to have the Grail).  The City of the Miracle only barely serves as a maguffin here; but, even so, without the adventuresome elements of The Gaucho, it really would be a dire slog.

Fortunately, it's not.  After all, Douglas Fairbanks was not the kind of person who (usually) indulged in dire slogs, even if he was the kind of person to make half-assed moralistic harangues.  The Gaucho himself, in Fairbanks' execution, remains one appealing fellow.  He splits the difference between a character apparently conceived purely to enable Fairbanks' desire to chain-smoke through the production, and a character who undergoes a revelation but is never forced to abandon his freewheeling, larger-than-life personality.  When the Gaucho can unmoor himself from the fable-in-progress, and engage in some high-test action-adventure, The Gaucho does achieve that thing we call "fun."

Meanwhile, as down as I've been about the spiritual content of the film, it does offer some lingering enjoyment.  First, I think it's important to recognize that back in olden times, Hollywood was able to do spiritual pictures that at least tried to be good; something that faith-based cinema these days largely does not, even though there's a ton of neat stuff that you can do with the Bible.  Second, one must concede that director F. Richard Jones sells The Gaucho's spiritual content about as well as a camera can, with imagery both garish and subtle: the latter category includes the lighting of the girl of the shrine, always with a white shawl that is made to shine from the diffused keylight behind her; and the former category includes the vision of Saint Mary.  Originally filmed in Technicolor, these sequences are today regrettably lost in their original form.  Though I have cause to seriously doubt it, it's not entirely impossible that the visual impact of color for these already-splendid visions of the Virgin might just have been the little nudge The Gaucho needed to push it over the top into actual effectiveness.  As it stands, they're still swell, and it's even cuter when you know that Saint Mary is played by Mary Pickford, Fairbanks' wife, in a cameo that seems much sweeter if you don't credit the gossip that it was motivated by Fairbanks' penitence viz. a rumored on-set affair with Lupe Velez. 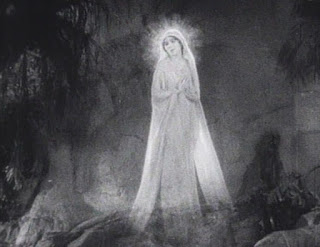 Well, so it goes.

But we do not have these scenes in color, so we cannot know if this is the case.  What we do have is a film that is not in any sense difficult to watch—whatever its problems, at the very least it does not replicate Fairbanks' typical, often-unforgivable sin of taking over an hour to get the plot started.  But it is also a film that is never really worth watching, either, for it leaves you neither edified nor particularly entertained.