A Jovian warrior sent forth from the eye of the storm 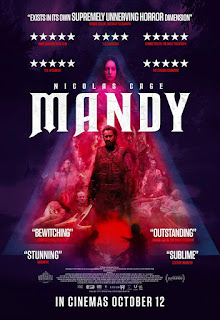 Something raw and powerful, they don't often come as uncompromising as Mandy, which means that it's both something to be grateful for, and something to expect you'll have a whole lot of problems with.

That Mandy isn't entirely successful at what it wants to be is less important than the sheer naked fact that it wants to be what it is in the first place, that being, in no particular order of importance, a Wagnerian rock opera put to film, a Video Nasty-style action/horror/splatter exercise in blood-and-guts primitivism, a blaring aesthetic experiment that feels like it ought to have been conducted in the mid-1970s (certainly no later than the time of its setting, 1983 A.D.—and, yeah, just like that, with the "A.D." in the wrong place), and a deliberately-made midnight movie, that could be easily mistaken for a deliberately-made bad movie, though it'd prefer you to think of it as a deliberately-made rad movie, instead.  In various ways, it lets those interlinked ambitions down.  But it comes so damn close that you feel an urgent need to give it more credit than it truthfully deserves; basically, to reward it simply for the uniqueness of its existence.

Which is a funny thing to say, I suppose, about a movie that is so obviously a variation upon a theme from its maker, co-writer and director Panos Cosmatos, and which is pretty much exactly the follow-up you'd expect from the creator of 2010's Beyond the Black Rainbow.  All the same basic preoccupations that animated Black Rainbow are reprised here: a fascination with the look and feel of a certain strain of 60s, 70s, and 80s cinema; a love for images that present in one color at a time (especially red); a vaguely mystical bent, delivered by way of another generation's countercultural theories and drugs of choice; a sense of sound as a driver of emotion and a replacement for "story," as such; a derogation of words, in general.  The difference is that Black Rainbow—which I have spoken of unfavorably before, and which I owe a rewatch—is far more of a riff on the kind of slow-moving, trippy visual art that was the predominant mode of science fiction in the era of Cosmatos' adoration, and while  Mandy does not dispense entirely with that sense of color and geometry, once past the beginnings, that meditative sense of observation is gone, and the feeling Black Rainbow wanted to generate, of life being slowly drained away by drugs and oppression, is replaced instead with a sense of being dosed with the kind of fast-acting poison that boils the blood and sets the brain on fire.

In other words, it's not boring, though it scarcely has any more narrative, and Mandy contents itself with telling something close to the oldest story it's possible to tell: boy has girl, and boy and girl are happy, until one day a band of misfit freaks happens upon girl, and boy loses girl in the worst way imaginable, and so boy fashions himself a chrome ax and steals across the night, slaughtering all responsible for the crime.

In slightly more specific terms, even if Mandy has barely any interest in any specifics beyond mood-setting (the title being the only likely vector for you to even learn its co-lead's name), the boy is Red, and the girl is Mandy, and they've carved out for themselves a little pot-hazed idyll amidst nature, with Red spending his days logging for the man, and Mandy contributing to their suspiciously-overdesigned cabin household with a counter clerk job, but whose passion lie in the art she creatres, inspired by the planetary romances and crazed high-fantasy novels she reads.  The misfit freaks, on the other hand, are the Children of the New Dawn, led by messianic psychopath Jeremiah Sand, who either has history with Mandy, or who has, in his madness, merely deluded himself into believing he does, and so orders his minions to take her, calling upon the services of a gang of mutant demons on motorcycles to help. 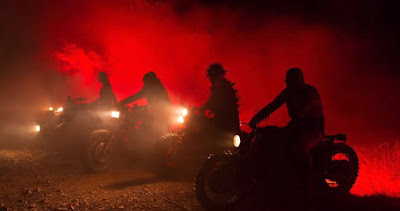 The striking resemblance this bears to Mad Max, or to a Meat Loaf album cover, is not coincidental.

This rape does not work out to anyone's satisfaction, and Red, clinging to life, manages to escape, and thus begins the last of Mandy's three movements, each helpfully announced by a title card in its own overwrought style: "In the Shadow Mountains, 1983 A.D.," presented in a pleasant, shimmering blue; "The Children of the New Dawn," doomy and rather resembling the Stranger Things logo; and, now, "Mandy," presented in metal album font like living barbed wire, so baroquely grotesque you would never be able to read it if you didn't already know what it said.

Each chapter is an excuse for different variations on a visual scheme that overpowers the camera's subjects with walls of solid color, and each chapter takes on its different character at least as much through noticeably different editing, moving from the slow-paced, dissolve-heavy dream of life "In the Shadow Mountains" to the much more abrasive meeting with "The Children of the New Dawn" to the pummeling violence of "Mandy."  And, of course, each chapter is an excuse in using cinematography and design and editing to relate deliriously unsubtle, single-minded psychological states: happiness; cruelty; lots and lots of rage; and, in what you may or may not consider the film's centerpiece sequence, though by any metric probably its most cinematically-impressive one, a drug-addled, tracer-riddled fugue, through which Mandy can barely maintain her identity as she comes face-to-face with the monster that wants to corrupt, possess, and destroy her, and we watch as the film attempts to overwrite her soul with his own, for a very long time, one face dissolving so imperceptibly into the other you don't even quite realize it's happening at first.

Now, the film thinks of itself as going to the utmost, you can tell.  In most of the ways that count, it does: it is extraordinarily violent, extraordinarily weird, and at times even extraordinarily funny; it is fearless in every single respect (no film that was afraid of how it would be received would feature an appearance by the Cheddar Goblin).  But it backs off in ways that are just as inexplicable as all the ways it goes balls to the wall.

Consider what it wants to be, yet how it limits itself.  It's a merciless revenge film—that spares one of Red's intended victims, for no obvious reason, other than the film's presumed audience might want to fuck her (a pity for a movie that had a decent chance of squaring the circle of simultaneously embodying the kind of hyperviolent macho vengeance fantasies we love while still managing in Mandy's own defiance the kind of feminism that, like greens, is good for you).  It's an action film where every action scene, except the very finale, could be pretty easily shuffled into just about any order without changing anything substantive about either the "plot" or (as is more important here) the mood; whereas only one of those scenes, involving dueling mechanical murderdicks (though I surely approve of the obscene symbolism), even pretends that any foe could so much as  conceivably pose a threat to Red once he's found his righteous barbarian fury.  That might've been a nice sensation to have, assuming that Mandy actually didn't want these scenes to start feeling slightly repetitive and unsurprising, especially after the second time Red's enemies render him unconscious yet, curiously, don't just kill him.

Meanwhile, it's a horror movie that goes all-in on its horror concepts—with full-on Biker Cenobites, summoned by the call of a mystical horn—then backs off just as precipitously, explicating their nature (through dialogue as well as through violence) as just more drug-riven flesh, despite having more-or-less fully committed to the explicitly supernatural already.  Speaking of scene order: even though they were designed as mix-and-match modules, it really feels like Red's own accidental trip on the biker's impossible war drugs—as visually crushing as it is on its own!—probably ought to have come before he manages to meet his opponents on their elevated level.

Especially, Mandy's a Wagnerian rock opera that, outside of the King Crimson that opens up the film and the guitars that accompany the final confrontation, sounds more like a prog metal band tuning up for two straight hours than it ever does an actual show; this isn't to say Johann Johannson's (last?) score is ineffective or bad, only that it is not effective or good outside of the images it puts a feeling to, which can be great (there's a moment where the swells coincide with Red's silent screams of anguish, and it's amazing), but which also seems like a tremendous missed opportunity, given that Mandy's a movie that sort-of promises, given the New Dawn's own taste in music, a magical war between the lies of hippie folk music and the bare-chested honesty of heavy metal.  (Frankly, if it turned out that Mandy's accompaniment was partially built out of the skeleton of Johannsson's rejected score for Blade Runner 2049, I can't say I'd be surprised: it has a few telling moments that seem to have been inspired as much by Vangelis as any Jim Steinman production.)

And I said that Mandy has a little bit of the deliberately-bad movie in it, too, which could've been damning, were it not handled well.  Naturally, this is where Nicolas Cage comes in, Mandy being as much a CAGE MOVIE as, say,  The Wicker Man, and quite consciously so—"You ripped mah shiiirt!"  And so do Red's eyes spend the entire back half of the movie shining out from behind a mask of other people's dried blood, while Cage sometimes gives this image the exclamation mark of a smile that, due to our pop cultural conditioning, seems to look a lot more like fangs.  ("Shadow Mountains" lets Cage contrast his later eruptions with a much mellower character, and yet Andrea Riseborough, with Mandy, is mostly alone in doing what you'd rightfully call "acting," even if both Cage and an extremely slimy Linus Roache, with Jeremiah, are each certainly putting on brave and impossible-to-unsee performances.)  Anyway, Cosmatos and Cage walk a very narrow line with Red, between what comes close to avowing itself as total self-parody and what justifies itself as a legitimate use of Cage Rage, and, of course, Cage Grief, which is distinguishable in that in the latter he's in his underpants.  Admirably, they never quite cross the line into true parody, even if they jump up and down on it till its innards pop out.  Instead, it's always in the littler things where Mandy gets on your nerves, like when Red spies a chainsaw sitting there for no reason, and apparently says to himself, "Yes, that will be a nice variation!", or like when Riseborough mispronounces the word "fissure," and another character mispronounces "Jovian," only the latter of which I suspect was intentional.

But it has to emphasized that these are all complaints on the margins, and, in a way, they underline the film's strengths.  The overall effect is a deeply-imperfect object that never had the slightest intention of being "perfect" in the first place.  Mandy wants to go crazy, with its ideas, with its performances, with its style; more than that, it wants to take you down into crazy.  It wants to honor the woman it kills to motivate her man by remaking the movie that bears her name in her image.  It wants to get fucking metal.  And hell if it doesn't succeed at that.