Have you thought about, I don't know, actually learning how to farm? 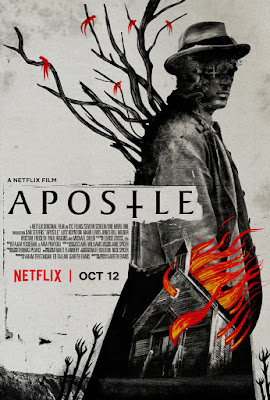 Another week.  Another film by a good director released on Netflix.  Another dud.

Robin Hardy and Anthony Shaffer's 1973 midnight classic The Wicker Man is esteemed for a whole host of good reasons: its off-kilter weirdness; the philosophical deathmatch it hosts between paganism and Christianity, in the process finding all religion to be wanting; its showcase of several randy folk songs; not to mention the basic fact that, for a period of several decades, it was all-but-lost, thereby giving it the flavor of a forbidden fruit, which, of course, you need to burn a rude policeman to death to get to grow.  Perhaps more than any other reason, however, it's esteemed because there had never been anything in the world quite like it.

There still isn't.  But it hasn't even really been ripped off all that much, considering its canonical status; perhaps the sole high-profile work to do so was its own remake, and even that took more than thirty years.  Well, now you can add Gareth Evans' Apostle to the short list of Wicker Man riffs.  You might have to, even if you'd rather not: imagine The Wicker Man, except it's longer, it's boring, it's bereft of erudition about all the things it says it's about, it's crammed into the aesthetic and ethos of a BBC drama you find repulsively ugly even if you can't really explain why, and it's possessed of a perverse and compulsive need to be contrary about virtually everything The Wicker Man did right.  If you can imagine that, you've already gotten most of the way to imagining Apostle—I've saved you 130 minutes—except you probably forgot to imagine a Wicker Man with a smattering of martial arts and gore sequences, which (to their credit) are at least fun while they're still on the screen, but (unfortunately) slide right off the mind as soon as they're gone, and serve mainly to remind you that the auteur behind Merantau, The Raid, and The Raid 2 has made some truly excellent movies in the idiom he's otherwise abandoned here, in favor of something he's not even remotely good at, that is, making a talky, slow-paced, ostensibly-atmospheric horror-suspense film, apparently purely because he wanted to leave Indonesia for a while and go back home to Wales.  Now you've got Apostle down, backwards and forwards.

We begin in 1905, with a scion of wealth returning to the United Kingdom from what we'll eventually learn was a personally-disastrous mission abroad, but all we know about the man right now is that he's rich, he's a laudanum addict, and his sister's been kidnapped by a cult that's occupied an island in the Irish Sea.  Tasked by his father's barrister with delivering the ransom and rescuing the woman, he assumes the pseudonym of "Thomas Richardson," which in no way betrays itself as being made up on the spot, and joins the cult's newest batch of recruits in order to infiltrate the island and ensure that his sister is indeed alive.  Arriving therewith, he acquaints himself with this paganistic cult, by which I mean he gets familiar with the much smaller number of people who actually matter to the story while interacting with no one else whatsoever and pointedly refusing to even skim their holy book, because why would he need to know anything about the dangerous new religion he's joined under the cover of fraud?  That is, other than the fact that the cult's "prophet," Malcolm, alongside his cult's pair of subordinated co-founders, the increasingly-wobbly Frank and the increasingly-megalomaniacal Quinn, are already well aware that the ransomer has arrived on their island, and have an urgent need to find out who precisely the ransomer is, in order to take his infusion of cash and use it to supplement the failed harvest that's presently threatening their community with out-and-out starvation.

The method by which Thomas escapes from this self-inflicted jam is both implausibly convenient and arguably the single most cinematic and thrilling thing that happens in the whole movie.  In the meantime, Thomas bullies a reluctant ally out of a local teenager, Frank's son Jeremy, by leveraging his lucky awareness of the lad's tryst with Quinn's daughter Ffion; and he may have made a friend out of Prophet Malcolm's daughter Andrea, too, principally because the screenplay says so, rather than any particular chemistry between the characters or their performers.  But all along there are indications, doubtless less subtle ones than I think Apostle fully intends, that whatever it is this cult's worshipping, it's actually real.

Other than that last wrinkle, it is a little familiar.  We have a missing girl (woman, but close enough) leading into a mystery that brings an abrasive jerk protagonist to an island occupied by a pagan cult with Celtic undertones ruled as a private fiefdom by a much more likeable British character actor; stop me if you haven't heard this one before.  In fairness, Evans' screenplay eventually takes Apostle somewhat beyond "Wicker Man rip-off," and has a solid conceptual foundation; evidently, it just doesn't know how to build from it.

It doesn't help matters that, in this case, the Likeable British Character Actor is Michael Sheen at the most subdued and restrained I've ever seen him, and, for that matter, the least likeable: trading in his usual camp flamboyance for one really rote evocation of what amounts to a despotic village mayor, he's a damned far cry from Christopher Lee at his louchest; like a lot of Apostle, there's nothing really wrong with Sheen's performance, but almost nothing right, either.  Meanwhile, the Abrasive Jerk Protagonist is Dan Stevens, and, as with Sheen, the performance feels unnaturally forced and channeled, starting with the way Stevens plays against his looks as he Capaldis all over this rocky isle, hunched over and hiding a Dark Past whilst glaring out with blue eyes from hollowed sockets.  Frankly, it pretty much begins and ends with that one note, his sweaty, disheveled grimness winding up being modestly comedic more than anything.  (As I noted to my girlfriend, "Hey, remember that time on Community when Jeff Winger was homeless?"  In every last frame of the film, Stevens looks like a very handsome man who's mad because a production assistant keeps throwing glasses of water in his face.)

These performances are inextricable from a screenplay that confuses "background exposition" with "actual characterization," and easily the worst thing about Apostle is how deeply unconcerned it is with building its setting as anything but a location for supernatural happenstance: there is not the slightest sense of how this community functions as a whole, what they believe, or why; of their number, we really only see their leaders, who jockey for control of the cult in the least interesting way possible.  As for their rites and customs, when they're presented at all, they're largely indistinguishable from any old preacher running around and God-bothering a more-or-less devout flock of followers.  You'd think a pagan cult would have some critique of the Christianity it's abandoned, but this does not seem to be the case; even a bog-standard patriarchal Christian sexual morality has followed them here, wholly unmodified, which is both 1)fucking lame, because has Gareth Evans even seen Wicker Man? and 2)how that wholly-featureless Jeremy/Ffion subplot gains any traction, which wastes a fair amount of runtime, even if it ends somewhat well.  The exception to Apostle's unimaginative depiction of an anti-Christian paganism that nevertheless appears to still mostly involve middle-aged men in black suits yelling at you on a Sunday is, of course, the pint of blood each brother and sister is expected to leave outside their door every night; and, as this is the kind of detail that invites a great deal of queasy fascination, it's obviously the first and last fascinating thing the movie ever says about life on this Welsh rock, and naturally its significance is explained scarcely half an hour later—with a full seventy more overindulgent minutes left to go.

Oddly, then, the cult recedes into the background while the object of its devotion is pushed forward, revealed and explicated so early and so thoroughly that it fades right into irrelevance, rendered prosaic (if it was ever going to be interesting, which I concede is somewhat begging the question), while, somehow, still never making any sense.  And this lack of any mood—whether that mood be one of Wicker Man-style subliminal wrongness, or, as Apostle seems to be aiming for, of overt and thoroughgoing menace—is completely fatal in the context of a movie like this one, that plays like one of those British dramas that stuff actors with anachronistic haircuts into period suits and do precious little else.

Now, things do liven up occasionally, but mostly only when Evans is doing what Evans is actually good at, which means that Apostle winds up ribboned with brief, bizarre explosions of action that show off its director's demonstrated talent at staging bone-crunching and blood-spilling.  He tries, I suppose, to tack toward horror with these scenes; maybe as much as half the time, he actually does manage to keep them from feeling completely out of place.  (Though on the plus side, sometimes they wind up being unintentionally funny, the only moments where this movie manages to be anything but monotonously dour.)  But mostly, Apostle spends its hours blithely coasting: on the questionable charisma of stars who don't seem to want to be there; on flashes of blood and gore; on Matt Flannery's dully crisp cinematography; and, most of all, on some reasonably heroic production design by Tom Pearce, who's created a number of grotesque interior spaces—every last piece of wood in this film seems to be weeping—each reflecting the sensation of deep moral rot and degradation we don't really get from any other aspect of the film.

It's a fair failure, then, and one suspects a lot of its failure is simply thanks to running itself into the ground: just to mention it one more time, but Apostle is vastly too long to support itself on what it imagines is its "atmosphere," and while it's barely possible that there's a theoretical 90 minute Apostle that embraces its nature as a shabby shocker and uses its more successful imagery to more concentrated effect, the Apostle we have bleeds itself dry long before it's over, and deludes itself most annoyingly into thinking that we could possibly care about either the one-paragraph summaries it calls characters, or the one-page outline it calls a tale.