Working for the weekend 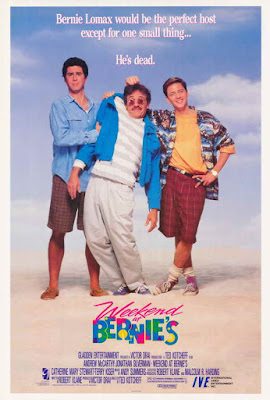 One of the 80s' best-remembered comedies is not always considered one of its best, period, but damned if Weekend at Bernie's doesn't have one of that decade's better hooks, no matter what else is or isn't good about it. 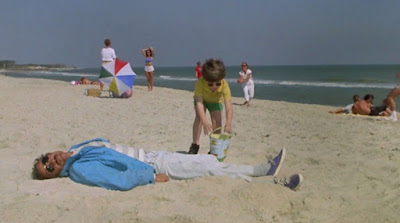 It's the high concept: what if you were at a party and the host died, and, in order to continue enjoying said party—or maybe for other reasons, perhaps even ones that hold up to the slightest moral scrutiny (or, perhaps not)—you had to pretend his rotting corpse was still alive?  Such is the question that animates Weekend at Bernie's, a film despised by the critical establishment in its time, and never subject to any particularly urgent reevaluation since, yet which became, it's fair to say, the kind of cultural touchstone almost no movie ever gets to be, its legacy representing a particular strain of "1980s comedy" for both its proponents and its (rather more numerous) detractors.  (Then again, some evidence suggests we could be closer to the end of this particular long tail than to its beginning: as far as I know, nobody came out with any Weekend at Bernie Sanders' parodies during the 2016 primary.)  Well, in spite of retrospective reviews where the attempts at encomium top out at "Why is it people remember this piece of shit?", Weekend is still one of those movies that everybody does remember, and sometimes they remember it as a head-shaking cultural nadir, and sometimes they remember it a bit more fondly.  I probably don't need to say that this review takes the latter tack.

So, reduced in the pop cultural consciousness to "just one joke," of course it is: one joke, repeated and varied for most of the final hour of its slightly-too-numerous 97 minutes (it'll probably always surprise you, no matter how many times you've seen Weekend at Bernie's, how long it takes its titular body to die).  Your reaction to these shenanigans clearly depends on just how funny you think that joke actually is, and, I suppose, on precisely how simultaneously ghoulish and stupid you prefer your dead body farces to be.  And since expecting a "dead body farce" to not be both ghoulish and stupid is downright unfair, I think it best to ignore Roger Ebert's one star review as just another example of the great critic simply shutting down whenever he had to watch a movie he didn't want to, which happened more often than we'd like to think given that whole "great critic" reputation.

Still, as with all things, it's a matter of taste, and I don't necessarily blame anyone for not sharing mine.  However, I do like that one joke; I especially like the way that this one joke serves two equally funny purposes, both as a vector for a great deal of terrifically silly slapstick and almost as much vicious, flaying satire.  Meanwhile, to my mind, Weekend at Bernie's is just about flawlessly ghoulish, and flawlessly stupid, in that it's incredibly gross and mean, yet never loses its breeziness, always anchored by Terry Kiser's legendarily game and (ironically) highly-physical performance, as the corpse whose face always seems to wear a lightly dazed smirk no matter how much punishment it winds up taking. 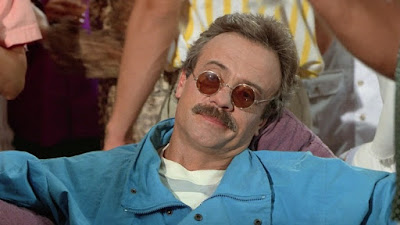 Weekend's one joke gets its set-up with the arrival of Richard Parker and Larry Wilson, a pair of doofy entry-level schlubs at a big insurance company in New York City, whom we meet in the midst of a withering heat wave.  (One of the first things our duo does is tell a mugger to get lost because it's simply too hot to get robbed, and the mugger seems to agree with them.)  Over the course of a nasty working weekend, Richard and Larry discover a massive overpayment, and bring their findings to their boss, a certain Bernie Lomax.  He showers the two with praise, and even invites them out to his house in the Hamptons to enjoy a better class of weekend.

In the meantime, Richard's newfound success allows him, in the space of just one day, to finally pluck up the courage to begin and then immediately ruin a relationship with Gwen Saunders, the intern he's been drooling over for months, and this puts him in a bad mood before he and Larry even leave Manhattan; but that's not nearly as bad as what Bernie has in store for them, since what they actually uncovered was Bernie's own multi-million dollar embezzlement scheme, and Bernie's only brought them out to his imposing postmodern beachside mansion as a convenient place to have his mobster associates kill them. 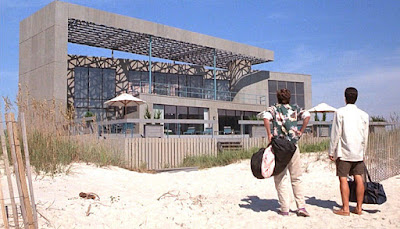 Luckily for Richard and Larry, the mob's gotten so sick of Bernie's sloppiness that they ice him, instead.  Yet this does still leave Richard and Larry with a corpse for a host, and one they'd really prefer not to have to explain to the police.  They drag their feet a lot on this, and by the time they might've finally done anything to resolve their little problem, Bernie's house has already been invaded by a multitude of partygoers, wandering in and out of the estate as the whim takes them, just like they do every weekend, and, confronted with this spectacle—it doesn't hurt that Gwen turns out to be one of Bernie's many guests—Richard and Larry figure they might as well try to enjoy the freewheeling Hamptons lifestyle while they still can, since there's nothing really to be done about Bernie anyway.  Thus they sort of settle into just pretending this remarkably nomadic dead man is actually still alive, albeit maybe a teensy bit drunk.

Well, it's gleefully horrid, just for starters, and eventually you'll get every variation on the gag you could possibly ask for, from the necrophilia bit ("best [she's] ever had," natch) to all the many, many times they drop Bernie from a height, bang him against things, etc.  But the funniest thing, and the most incisive thing, is how easy it all actually is: despite being dead, Bernie holds up his end of a number of one-sided conversations, and all Richard and Larry really have to do to complete their charade is simply make sure he doesn't fall down.  Hell, even that doesn't make any decisive difference.  The notion is presented incredibly forcefully, no less because it isn't mentioned or even really that stressed (it's not that kind of movie), that as long as all of Bernie's stuff is still here, it doesn't honestly matter to anyone if he is dead.  It's as cruel an indictment of the 80s' glorification of conspicuous consumption and capitalist striving as anything you could name, and it doesn't get any sharper than Bernie's corpse sitting on a couch while his oblivious "friends" have fun with all his rich man's shit, the only reason he ever had any standing in their community in the first place.  And there's something wicked about how this would-be master of the universe is attended in death just as closely by his put-upon servants as he was in life.  (Bernie's introduced to us already defined by his indifference, and his absence, taking an unannounced piss in the middle of his underlings' presentation.)  It's downright pharaonic.

If there's a balance here, though, it definitely favors the broad sitcom farce over the satire.  Hence sitcom actors: Jonathan Silverman essays a capable everydork, spending every second on screen being emotionally or physically punished for being a lying loser (actually, it turns out that Weekend at Bernie's has two jokes), which comes in one of two modes, either Richard pining over Catherine Mary Stewart's time-capsule beauty, or Richard reacting vehemently (but always ineffectually) to the devil on his shoulder represented by Andrew McCarthy's Larry, essentially a junior dweeb version of Bernie, and an embodiment of 80s crassness you either have to laugh at, completely despise, or both.  But it really comes down mostly to Kiser, and the film orbits around his freakishly-good corpse anti-acting. 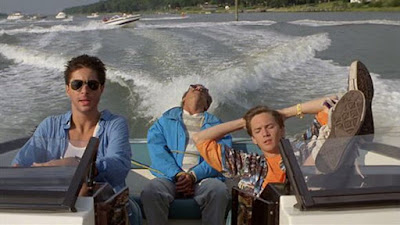 Ted Kotcheff recognizes what he has here, and manages a great deal of hilarious background business while (typically) Silverman looks lost and confused in the foreground.  He and editor Joan Chapman (reuniting with Kotcheff off of First Blood, which seems like one incredibly weird pair of movies to be most famous for) keep a spritely pace, and something's always happening, which is all any comedy really requires.  Now, I doubt I'd ever go to bat for Weekend as especially well-made: it bears the same fundamentally-likeable brightly-appointed cinematography that most decently-budgeted comedies of its decade do, plus some modestly great production design from Peter Jamison in the form of Bernie's despicably soulless mansion, a house that was assembled and disassembled purely for this movie's benefit; but there's no way any movie with this much disastrous ADR is going to get congratulated for its craftsmanship.  Even so, Kotcheff and Chapman have a fine way of staging visual humor, and having a mute central comedic performance forces Weekend to be at least a little more cinematic than it absolutely needed to be, so that the most laugh-out-loud moments are the ones where Bernie just shows up in the frame, at first startling the viewer almost as much as his caretakers, and later rewarding you for anticipating his presence.

Now, it's inevitable that the plottier things get, the worse they get, because everything about Weekend that's really worthwhile has everything to do with its basic situation, and almost nothing to do with how that situation got started or how that situation will conclude; but it does have to tie off those threads eventually, with the mob hitman returning to finish the job, and these scenes are certainly fun-enough (the assassin has a heckuva time trying to re-kill this dead man), though once we leave the mansion and its immediate environs things start to get ever-so-slightly drawn out, to the extent you wonder if it really requires this much set-up and this many repeated warm-up jokes (boy howdy, can Larry really not pilot a boat), just so this movie can have a sequence with Bernie getting dragged from the back of his speedboat and slammed into channel markers.  Not to be too hard on anyone: individually, these gags are all perfectly acceptable, and while it's true enough to say that (paradoxically) this farce gets less funny as it gains momentum, it is still funny, and has the decency to end almost the exact moment its plot does, with one really superb final frame as Bernie once against escapes the surly bonds of proper corpse disposal.

It's ultimately a frivolity, and if you've seen the poster and the trailer, or even had them related to you second-hand, then you are not very likely to be genuinely surprised by anything you see here.  But it's done with slightly more depth and rather more creativity than it's ever been given credit for, and if I had to choose between one good joke told over and over, with an iconic character and non-trivial verve, and the average comedy, which is different bad jokes told poorly, then obviously I'd choose Weekend at Bernie's every time.