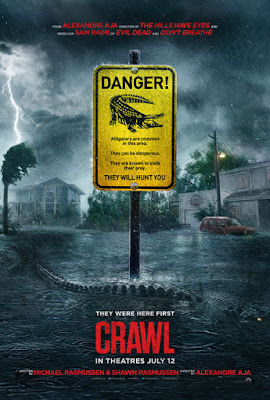 A fun, disciplined trifle, Crawl knows what you want and gives it to you reasonably good and fairly hard.

I dunno how everyone else feels, but personally I'm gratified that a small window's been opened up over the past few summers for a low-budget-but-not-too-low-budget creature feature; I'm not sure exactly when it happened, but I think we can likely peg it to 2016's rather successful (and rather excellent) shark movie, The Shallows.  Good or bad, it's kind of hard to really fuck these things up, and in their own little way they've made a radical statement about the cinema of the 2010s, specifically about the fatigue inherent to watching populist entertainment in a theater these days.  And they do this by keeping the faith, knowing what they are, and remaining well under 120 minutes even as "normal" mainstream movies have started poking at the two and a half hour mark as their God damned average.  Crawl is 87 minutes, for the record, and God bless it.

Crawl is about alligators.  It's about other things.  But mainly it's about alligators.  Still, for the sake of conventional narrative, the story of this movie about alligators does also center upon a human, specifically Haley Keller (Kaya Scodelario), whom we meet at an early morning swim practice at her Florida college, where she loses her place on the traveling team, and then gets a frantic call from her sister asking if she's heard from their divorcé father, Dave (Barry Pepper).  His lack of communication, we suppose, is nothing new for the women, but with a serious hurricane bearing down upon the state, that silence has gotten her sister rattled, and Haley, against her better judgment, agrees to break the evacuation order and find the man they call dad.

And so Crawl, in really no time at all, has given us a great deal already: an opening credits montage that gives enough attention to the motion of bodies in water and the geometry of an Olympic pool that one imagines Crawl could've been a pretty decent sports drama if it had wanted to be; a protagonist with the kind of useful skillset and competitive personality that indicates she won't be any wilting lily; and the complicated feelings she has about her father as the person who pushed her into swimming in the first place, and fueled her (frustrated) drive to win with his own oppressive expectations.  By the time she braves the hurricane and finds Dave in their home's basement, unconscious from the wounds he sustained in a 'gator attack, it's given us just about everything, with a simple premise that promises to resolve all of Haley's complicated feelings amidst many wonderful scenes of genre carnage.  And while there is very little about Crawl that isn't dumbly predictable (there's a dog involved, Sugar, and just guess how she fares in the face of a reptile rampage), if you're bothered by Crawl, I assume you're just bothered by movies, because they're kind of all like this: reductive human emotions embodied by actors and wrung through writerly conceits.  And I'll still take "defined characters who talk about their feelings in deeply inappropriate circumstances" over, say, "nebulous person-shaped ideas dragged across a vague metaphorical landscape for two and a half hours until the movie stops," which I think answers the question I'm assuming you asked, "Which is better, Crawl or recent art horror darling Midsommar?"

Well, there's clearly more of a tendency to compare Crawl to Jaws by way of The Shallows—and, y'know, I get it (I mean, I recognize that no more than 500 words ago I placed them in the same movement).  Both were directed by journeyman Europeans (in that case Jaume Collet-Serra, in this case Alexandre Aja); both are about a monstrous beast or beasts; both are about a young woman who has life problems that are brought into focus by facing the prospect of being eaten.  But, as I've always said, The Shallows is a Gravity rip-off, not a Jaws rip-off, at least properly speaking.  Crawl, though, is absolutely a Jaws rip-off, being entirely disinterested with the deeper questions of "why bother?" that drove Gravity and The Shallows, and being more concerned instead with correcting the major problem it saw in Jaws, which is that the code of masculinity it chose to elevate was the wrong one (that is, not Quint's salt-addled bravado).  That it does so in the form of a woman is mostly incidental (in fairness, it was mostly incidental in Gravity and The Shallows too), and probably simply has more to do with the horror and thriller genres' tendency to default to a female protagonist for reasons that are obvious enough I won't bother listing them, though in this case the general propensity for a larger eye-to-face ratio seems to have mostly justified the choice.  So if it is about anything other than alligators, it's a kind of paean to the Florida of Internet legend, positing that it's a place unfit for human habitation that will only become moreso, yet it clearly admires the people who inhabit it regardless, albeit as much for their stubborn stupidity as anything else.

Anyway, that's the show: Crawl puts Haley in the basement with her dad, maps out where "safety" is (behind various mazes of pipes that sometimes feel more like the basement of a factory than a house), before denying it to them, and escalating the danger as the hurricane gets worse and the water rises and one respectably-CG'd alligator becomes two respectably-CG'd alligators, then three, then more.  And it's solidly put-together throughout, rarely permitting downtime, just inventive enough to get the job of "keeping the characters terrorized of what may or may not be below the water" done, and too short for the same locations and same shooting style to get boring.  (Aja and cinematographer Maxime Alexandre have made a handsome movie, doing fine work with a lot of blocky shadows that highlight rather than obscure Scodelario's expressive face, and with water reflecting light in all manner of pale, sickly, disturbing blue-greens.  Though the biggest champion might be production designer Alan Gilmore, if in fact it was his job to figure out how to flood Crawl's quotidian spaces in interesting ways.)

The interpersonal stuff is, sure, ten-inch-thick boilerplate, but it's at least elevated a little bit by strong central turns.  Pepper plays "Southern as fuck" without being offensive about it (which is remarkable, given I'm almost always offended by it); he's clearly been badly limited by the goofy shit the screenplay has demanded of both of its leads (he begins at least two scenes with a pained, guttural growl, while the agony he definitely ought to be be constantly feeling doesn't seem to inform much of his performance otherwise), but he manages some great chemistry with Scodelario.  As for Scodelario herself, who's clearly studied every Emma Stone movie within an inch of its life (but, then again, there's no Emma Stone movie where she gets chomped on by an alligator), she's kind of genuinely great in her own right: she offers an extremely calibrated performance that, I'd bet, draws from what must've been a hell of an unpleasant shoot, always credibly afraid on behalf of her character, but not too afraid (this woman has seen alligators many, many times), and channeling that fear through a seething anger at Haley's situation, which is probably how she actually felt while filming every single water-drenched scene, and it absolutely works to Crawl's benefit.

But if we're comparing Crawl to The Shallows, and I guess we might as well, it does have one big competitive advantage: it's actually rated R.  And what this means is that it can go to town on the violence, which is, presumably, why anybody buys a ticket to an alligator movie.  The script knows it's kind of written itself into a corner with this.  After all, it's committed to being a more-or-less single-location thriller with two characters, where if one dies, the movie's just over, while the other probably shouldn't die until near the end, if he dies at all.  Hence Crawl's recourse to some of the most transparent contrivance imaginable in order to put some expendable meat on the table, so that this movie's body count gets up to between five and seven people, rather than between zero and two.  If it's even tied to the actual story we're watching, it's only through Scodelario's performance in reaction shots.  Yet I don't think you can complain: they're mauled to death in giddy sequences that are under no illusion that their destruction doesn't have its ideal audience whooping with glee.

These victims, you see, actually do take realistic battle damage in the human war against the alligators.  Whereas the other side of the screenplay's solution to the problem of "not enough people getting eaten by alligators" is to simply have Haley and Dave be eaten by alligators too—several times, in fact—but then have neither die nor become seriously incapacitated despite, as I said, being eaten.  These sequences do start to impact credibility after a while, suggesting that producer Sam Raimi's biggest influence on the project might have been to push toward a certain overestimation of the human body's basic resilience.  It starts to tack a little closer to the sensibility of Evil Dead than the sorta-grounded, po-faced survival thriller it looks like.  (A final Shallows comparison: I truly believed that Nancy had gotten bitten by that shark; I'm not sure I ever believed that Haley or Dave had gotten bitten by these alligators, which, if you've seen the last twenty minutes of the movie, is a ridiculous thing not to believe.)  But I kind of love that about Crawl: the way it keeps such an exquisite straight face, while knowing, fundamentally, that it's a violent cartoon that only really exists to rip people's arms off, or else try to rip people's arms off whilst they unload a handgun directly into its guts.  Yes, perhaps it would be "better" were it more severe, were its filial themes more nuanced (and I frankly think they do okay), were its actors' accents matched (they are not), and were there more deeply-felt stakes.  But it does everything it needs to, and it ends the very instant its parable is over and, by coincidence, it's run out of ideas on what to do with its monsters.  In one of its moments of climax, it even offers us one of the most stupidly great quotes ever uttered by any horror movie heroine.  And what more could you ask from a summer afternoon than that?