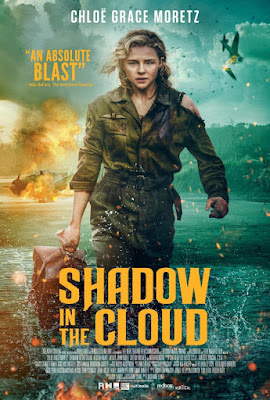 Though I want to say that it's good, or at least good-enough—perfectly watchable, fun, and sometimes actually great—Shadow in the Cloud is the kind of movie that genuinely disappoints me: a film that looks like it was specifically made to appeal to my interests, is executed with serious verve, yet still winds up being just barely adequate because of, basically, one single decision at the screenplay stage that transforms it right before your eyes into practically another movie entirely, one significantly worse than the one you had been watching and enjoying.  This happens halfway through, and not everything that occurs afterward is "bad"—I acknowledge that some viewers will be perfectly willing to go along with the demented left turn it makes, and, you know, that's cool—but the thing that happens becomes so thoroughly what the movie's going to be about now, that if you don't like it, it's going to be awfully hard to enjoy the good parts because there is not one single second that goes by afterward where you can ignore it.  Irritatingly, having done this, Shadow jettisons its worthier themes, kind of wrecks much of what was initially compelling about its protagonist, and repositions its titular threat from a metaphor to a monster-of-the-week.  On top of that, it gives the film permission to become very dumb.
So that screenplay comes rewritten by its director, New Zealand filmmaker Roseanne Liang (making only her second feature since 2011), sharing credit with nepotism hire and creep Max Landis, and while it plainly only retains his name because of WGA rules, it's unclear to what extent Liang actually reconceived it.  If she didn't reconceive it much, I wish she'd reconceived it more.  I'd venture it still feels like it was written by a dude overcompensating for his sins—and still doing so in sexist ways—but then, Liang's said she took inspiration from other single-location films, namedropping Aliens, which... yeah, no fooling.  Either way, I guess Liang the writer gets the blame, since I expect her hand was pretty much free at that point, but, on the plus side, Liang the director goes extremely hard at the material anyway, in ways that make for a downright exhilarating B-movie and, if the material had been actually good, something that could've been a low-budget genre miracle.  Though it occurs to me that a bit more money wouldn't have killed anybody, either.
Shadow starts exceedingly promisingly, with as confident a statement of purpose as movies get, a brief animated short modeled on Pvt. Snafu cartoons (albeit, unfortunately, not with any special fidelity: it's in color, and distractingly digital, but at least the aspect ratio's right), wherein a lackadaisical goofus of an airman is chastened by a narrator, whose hands reach right into the screen, like somebody making shadow puppets in front of the projector, and who reminds him that a careless airman is a dead airman, so there's no use blaming "gremlins" for maintenance failures even as a gray bat-like creature punks him and generally degrades the war effort.  You are presently invited to guess, if you somehow didn't already know, what kind of monster this action-horror film will star.