What a disaster: The devil with that report 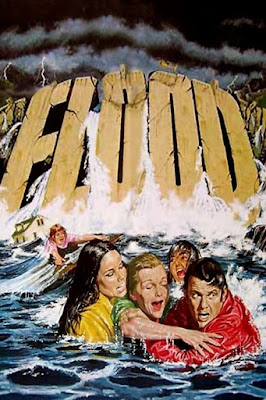 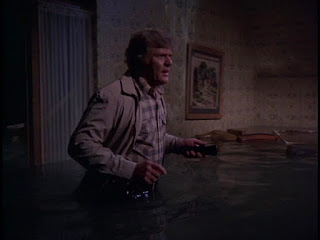 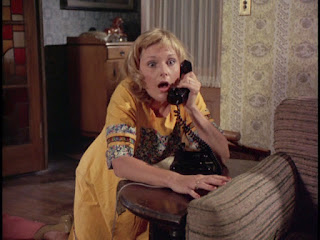 This bleeds into the finale, which is dragged out across the last half hour of Flood's 97 minutes.  Given the stately construction of Allen's features, it's remarkable that he must've felt that the titular disaster here couldn't be put off longer and concentrated into a tighter climax.  Worse, it's not like WBTV gave him the means to realize much of one anyway: the last genuinely good scene is the last desperate attempt to open the spillways and save the town, which ends with the dam's collapse.  It is not the worst stunt and miniature work, and it's not unthrilling, but it's not great.  It also comes off like Allen had been obliged to soften his typical callousness; it's crass to say, but this film does not have the body count it requires, whereas the destruction porn on offer is drab and low-key, more "stuff floating around in a swimming pool" than "raging floodwaters," matched with stock footage that feels like it's hovering in a void outside the movie.  And it just takes such a long time—a curious thing, for a flood—contriving such awkwardly-staged danger around the safest characters in the film that it's hard not to get bored with it.  Even when it does get mean, it doesn't feel real, like Allen presented a list of the few characters who could die, but nobody put in the work to get them to a place where they reasonably would.  Nothing about it hurts like it should.  It never finds even a TV-scale copy of the mortal terror that Poseidon and Inferno had respectively soaked and boiled you in.  It's an underwhelming conclusion to a movie that had promised more, but what's so disappointing about it, coming from this filmmaker, is how emotionally flat this disaster is.
Score: 5/10
Posted by Hunter Allen at 12:10 AM