And some, you'd assume, were good people 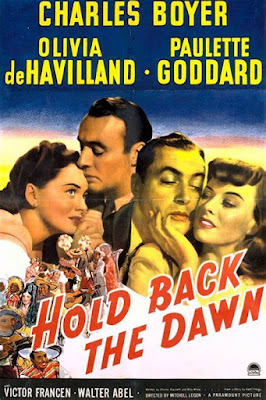 HOLD BACK THE DAWN
1941
Directed by Mitchell Leisen
Written by Charles Brackett, Billy Wilder, Richard Maibaum, and Manuel Reachi (based on the novel by Ketti Frings)
Spoiler alert: moderate 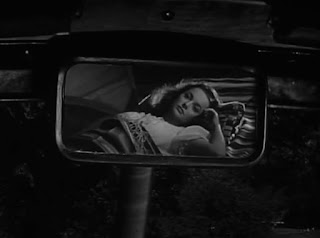 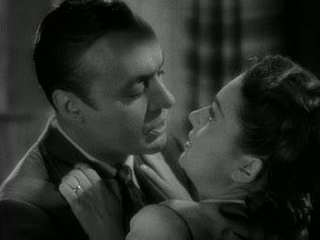 Deviously orchestrating events so that she and her charges wind up having to stay overnight in his hotel lobby while her car gets fixed, Emmy awakens to find herself being stared at hungrily by a sinister-looking foreigner who has, while she slept, surreptitiously placed his "mother's" wedding ring on her finger.  Emmy is initially—and one dares say, fairly reasonably—bothered by this, but once she's had a few minutes to think it over, she realizes that a moment of spontaneous irrationality is exactly what her life's been needing, and the sun's barely risen before they've been married.  It seems that all that's left is to wait four weeks, and in the meantime Anita can keep Georges company while they scheme to reunite their dance act/personal service business in the big American city.  Unfortunately, there are two problems.  The first is that America's noticed the rash of failed marriages emerging out of Mexico, and the border service's local friendly immigration inspector, Hammock (Walter Abel), who seems to like his immigrant charges—our hero excepted—has been tasked to be on the lookout for these sham marriages; and lately he's spied an amorous clinch between Anita and her ex-partner.  The other problem is that Emmy's already back from America, eager to start her honeymoon, which means Georges has a pressing need to get out of town before Hammock notices that he's plainly scamming his new "wife."
If this is the hour mark, anyway, this is where Dawn finally picks up a full head of steam, abandoning its hang-out mode and banking everything it has on the dramatic contradictions of this "marriage" as, inevitably, having to spend actual time with his mark begins to make Georges question what kind of irredeemable monster it would take to exploit her so ruthlessly.  The reason it picks up is, fundamentally, probably just that a narrative's finally begun; but it might be just as much because its other star finally gets to be in consecutive scenes in her own movie.  De Havilland has played fair with this whirlwind romance, previously doing just about as much as was humanly possible to provide the emotional foundation for it.  She even does well enough laying that foundation that it's not totally incredible, if you're willing to accept that it's a fait accompli and the rest of the movie needs it to happen, though Dawns's most obvious structural problem (besides the framing narrative) is that it is rushed to such a degree that the rush was presumably supposed to be part of the effect. 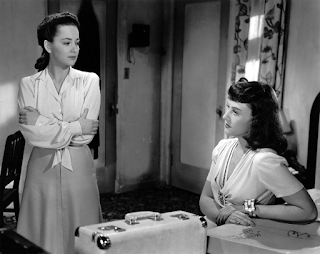 That might be true, but it's not quite sufficiently stressed by Leisen or his screenwriters or anybody besides de Havilland, and fifty or sixty minutes into a film is an awfully long time for it to still be shrugging sheepishly and chiding us in its sophisticated foreign accent, "ah, but you must allow us our premise."  Even just a slight bit more (perhaps, I don't know, repurposing the dead screentime spent touring the fucking Paramount lot, or on the semi-dreadful comic relief with firecracker-toting children and put-upon car mechanics, or both), would've sold the Before Sunrise phase of this somber screwball caper as a relationship already worth investing in.  Hell, even crammed into almost nothing, the way de Havilland chases after Boyer in a pretty great little tracking shot that Leisen's set up, while he smiles smugly—yet with the tiniest hint of surprise at his new fiancée's ardency—almost gets us where we need to be.
The presumption one has to make is that Wilder was more interested in Georges than we were likely to be—which is not to say "uninterested," and though Boyer's a lot blunter and less appealing with Goddard, that's also "the point"—because Georges was practically autobiographical for the screenwriter.  (European, check, fleeing the continent for America, check, paid dance partner/sex worker?, check, stuck on the Mexican border, check, winds up on a movie set, check.)  Wilder bends the whole project around this experience, though it's not unproductive: Dawn is essentially straight-up political, with a lot of time given over to the textures of its immigrant supporting cast.  Most of this is pretty fun, albeit a bit wacky and schematic on the one hand (one turns out to be a descendent of the Marquis de Lafayette, and hence already a U.S. citizen) and message-movie melodramatic on the other (just wait till the pregnancy subplot comes to fruition).  It's perfectly fine and likeable texture, anyway, as well as a nice break from Georges's squalid melancholy (not to mention it helps build Hammock's patriotically-rulebound functionary as a sympathetic, and empathetic, antagonist).
Certainly the point is well-taken, though it's also nice to see that eighty years ago they could make a deeply pleasurable romantic-not-quite-comedy that still verges on open borders propaganda without ever feeling weird about it, whereas "fairy tale romance with a sexy, duplicitous Afghan refugee" strikes the brain as such a cultural and industrial impossibility that it would drive you slightly mad trying to imagine what such a thing could possibly look like, even though every one of these folks is presumably fleeing either Nazi occupation or the Holocaust itself.  Well, without all this subplot and subtext, we wouldn't get that champion dialogue exchange between Georges and Emmy, where she speaks of a crystal clear lake that'll never go stagnant as long as there are fresh streams flowing into it, and Georges opines, bitterly, that America seems to be putting up a lot of dams on those streams.  "Only to keep the scum out," Emmy brightly replies.  Cut to a close-up of the aforementioned scum.
But once it commits wholeheartedly to that romance, and Georges and Emmy are alone together for their "honeymoon," the film shines.  It's where de Havilland actually gets to work with a character, as opposed to a vague idea about a woman who realized suddenly that she was capable of getting horny, and she's terrific.  (My impression is that Dawn is best-remembered for pitting de Havilland against her sister Joan Fontaine in the competition for the Academy's Best Actress; I concede that there is every possibility that I think Fontaine's win was unfair purely because Suspicion is a bad movie and Dawn is a good movie, but if I wanted to justify it, I would say that being the simpering, scared woman in a spousal abuse thriller is easier than crafting a love affair out of completely unreasonable emotions and making that believable.  The better question is whether de Havilland or Bette Davis should have won, honestly.)  Anyway, I suppose the argument is that de Havilland is falling back on her robust good-girl persona just as much as Fontaine did her Rebecca-honed fragility, but it's a skillful deployment of that persona, with the kind of highly specific sweetness sufficient to make you believe that a hardened conman like Georges could, despite himself, fall in love.  Principally, she does this by putting the dorkiest possible spins on lines that are plenty dorky on the page already (it's honestly impossible for me to think of anybody else who could make Emmy's dumbassed musings about windshield wipers charming, but de Havilland does).  And she always remembers that Emmy is horny, so she's also dorkily horny. 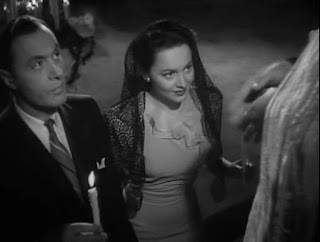 For his part, Boyer is more one-note, mostly an expression of simultaneous confusion and disdain with his head so frequently cocked backward to look down his nose at things that you wonder if his neck gave him trouble.  This is, however, the correct note, particularly as that confusion and disdain begin to be turned inward rather than toward his shabby environs.  Goddard, meanwhile, reads as about ten times as blatantly, irreproachably American as de Havilland, and goes, I guess, for a Barbara Stanwyck, landing somewhere in that general vicinity.  This at least always does Anita adequate justice, especially as her envy manifests and she gets a pretty great (even halfway-convincing) monologue about why Georges belongs with her.  Truthfully, both of them exist principally to be reacted against by de Havilland and to be confounded and illuminated by Emmy's honest and self-sacrificing love (maybe even more poignantly, her remarkable ability to find satisfaction even in something that she knows wasn't real because for a little while she could believe it was), which is another reason why the screenplay probably ought to have been portioned slightly differently.  But once it seizes on the romance underneath all the cynicism, and becomes fully a desperate melodrama, it barely sets a foot wrong.  (Okay: it has a downright laughable "bad woman driver" scene that I'm certain existed in the first draft as a suicide attempt, insofar as the script has foreshadowed precisely that; and it must, of course, eventually return to its lousy framing narrative.)
Leisen is guided by Wilder and company's screenplay, doing his job mainly by illustrating it with confident craft.  There's nothing extravagant about Dawn's filmmaking, but it is confident—done up in handsome silvery cinematography from Leo Tover, including that aforementioned tracking shot, which in turn depends on some very fine (and Oscar-nominated) art direction courtesty Hans Dreier and Robert Usher, conjuring this border hamlet as something halfway between heat-soaked dreamy abstraction and detailed enough to function as a real place, and that metaphorical liminality works in its favor as much as its more literal borderland qualities.  But probably Leisen's own biggest contribution is an ability to put in little moments of holy intimacy, that we're invited to experience through Emmy's emotions even if the film "belongs" to Georges, which really gets at how, after however many years of deadening himself to any sensation, he's begun to come alive to feelings that he could have only ever experienced through her.  That's great romance, and Hold Back the Dawn is a great movie, and I feel like I could be underrating it until I remember that framing sequence, and that first hour in general.
Score: 8/10
*And perhaps you've heard of 1939's Midnight, also written by Wilder and Brackett, also directed by Leisen, and also unavailable, though it was on the Criterion Channel no later than three months ago, albeit not on there today when it would've been useful.  Perhaps I should consider the ten dollars I throw at them every month a charitable donation.
Posted by Hunter Allen at 2:50 AM