Have you considered a centrifuge? 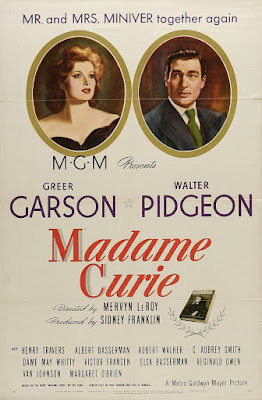 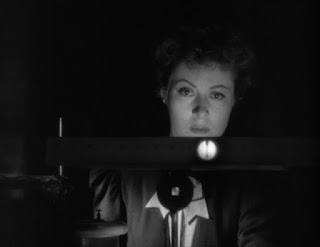 In 1943, Mervyn LeRoy made his last woman's melodrama of the war years (he would finish up World War II with a man's melodrama about explosions and airplanes and national revenge, which is also pretty cool); it was, likewise, his final (credited) collaboration with Greer Garson for over a decade.  This was all an accident: Albert Lewin had been set to direct, only to be fired right before production began, whereupon LeRoy was pulled in at the last minute.  I would presume he didn't exactly complain, given that he and Garson had turned out the second-highest-grossing film of 1942 with Random Harvest; but you never know, LeRoy might have scowled at a film that perhaps initially looked as if it would only duplicate his efforts on Blossoms In the Dust, a film I don't think he enjoyed making very much.  It too had been a nobility-saturated biopic of a famous woman dedicated to her work, who had been obliged to soldier on, most womanfully, despite personal tragedy—which is to say, the kind of movie that's forgotten as soon as it gets its Oscar nomination.
This film, Madame Curie, had in fact been a long time in the making even before Lewin was attached: Éve Curie's biography of her mother had been purchased for adaptation by Universal all the way back in 1930 (indeed, when her mother, Marie Salomea Sklodowska Curie, co-discoverer of radium and polonium, was still living; she only passed in 1934).  Those rights were sold to MGM soon thereafter, where it was poked at from time to time but was not seriously pursued till 1938, and one is obliged to speculate why.  Most explanations are necessarily cynical: either they were waiting for the famed scientist to die and present their film as an encomium (in which case they were rather late), or they were waiting for the bad memories of the Curies' most salient contribution to American history—which took the form of hundreds of women poisoned by the Curies' discovery—to fade into the background.  (The timeline certainly fits: 1937's cheerfully-nihilistic, borderline-irresponsible, and pretty-great-anyway satire, Nothing Sacred, which is about a so-called "radium girl" a whole lot less than you might think from the synopsis and I'll leave it at that, surely would have signaled that the subject had now become "safe.")  But maybe it was due to duller reasons, boiling down merely to an internecine competition of MGM's leading ladies for the title role—evidently, it had a lot to do with Joan Crawford waving goodbye to the studio—or to directors who weren't very invested in it, like George Cukor, who'd been attached even before Lewin was, but gave it up in the days when MGM was still trying to fit the overly-literal Aldous Huxley screenplay they'd commissioned into some kind of movie-shaped box. 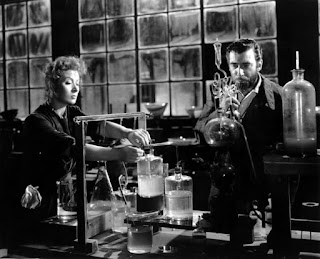 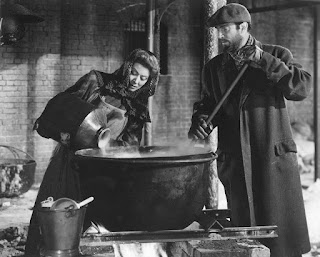 Now, it's still a performance from Garson, in that she's playing a character: she gets that this screenplay's Marie is still a huge nerd.  But in this respect she is outshone at all times by the unrelenting nerd supernova that is Pidgeon's Pierre.  He goes for it completely, offering his handsome-but-less-than-dashing romantic lead as a stammering collection of explicit social anxiety, goofball malapropisms, and a sympathy-inducing tendency to raise his voice when he fears he can't make himself understood, rather than simply using scary words that might properly identify his feelings.  It is probably entirely devoid of any historical basis and it is, nevertheless, the most charming thing imaginable.  He's so lacking in suavity that it comes back 'round—my favorite little thing in the movie is when he and Marie are off on their honeymoon, and Pierre's mother (May Whitty) snatches away the textbooks he'd planned on bringing, he feigns compliance only to snatch them right back, just before he and his bride cycle off into the countryside to fuck and read.   (Pidgeon's Pierre is, somehow, endearing in the same way that any latterday equivalent would almost necessarily be unbearably irritating; the same nerdface performance, moved forward into the 21st century, would never shut up about comic books and science fiction long enough to do any actual science, and you'd doubtless feel a great urge to stuff him back into the locker from whence he sprang.)
Well, Pidgeon and Garson were always an effortlessly-credible pairing, the kind of low-key screen couple you're just happy to see exist in the same room with each other because of the gentle chemistry they generate (even in an otherwise terrible movie, like Mrs. Parkington); but Madame Curie really invests that with the details of a legitimate relationship.  It's romantic by definition, in that it involves huge feelings that at least one of its participants has no idea how to properly express, but it's possibly also the most plausible opposite-sex friendship of the Golden Age of cinema and, ironically, the marriage that feels the most modern, revolving as it does around a preoccupation so fully shared that they don't even notice when they break their mutual promises to spend more time doing normal person stuff and head right back to their lab together.  Perhaps this is how Madame Curie feels less jarring than it could when it finally gets down to its biopic brass tacks, and arrives upon the business of the Curies' agonizing and years-long work to isolate radium, for this feat feels like nothing but an inevitable extension of their beings, and the most natural expression of their love. 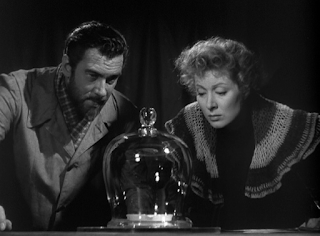 It's not even jarring when Hilton pipes back up to narrate the montage of how they built their lab in an abandoned dissection shed (Cedric Gibbons and Paul Groesse, et al, do a fantastic job of detailed recreation), where they processed tons and tons of pitchblende to find their mystery element.  In fact, the "science" second act of Madame Curie is potentially where LeRoy had the most fun as a filmmaker, with arcane apparatus hulking in the corners of darkened rooms and compositions that suggest mad science as much as regular, workaday science.  Here, Joseph Ruttenberg's expressionistic cinematography and the methodical storytelling from LeRoy and editor Harold Kress borders on the qualities of a silent film; it captures the science, the seeming alchemy, and (especially) the grueling manual labor that went into the Curies' laying of the foundation for the future.  Madame Curie, though a very big hit, was frequently cut for runtime in re-releases; obviously these would be the scenes first to go.
I can understand the impulse but it draws a frown, because they're fine little expositions of scientific process, evoking a sensation of entering a great unknown.  And for all I love it, it is, still, the weakest aspect of the film—not because of the filmmaking, nor even the subject matter of a repetitive, sisyphean process, but because the script felt a need to punch up that process with some fake tension, despite this film's science tale having one of the most foregone conclusions conceivable.  ("Will Marie and Pierre succeed in isolating radium?" asked literally nobody.)  I admire how LeRoy, Garson, and Pidgeon present science as less a function of inspired genius than obsessive hard work, yet one could live without the bits that make the Curies come off obtuse and stupid, most disagreeably when the Curies fail to recognize that "the stain" on the bottom of a bowl is radium until it starts glowing at them.  Which is annoying regardless: the glow of radium was—obviously—visible for years before they got to a "pure" radium salt, and trying to get surprise out of this story, rather than awed wonder, is the film's most ungainly and illiterate misstep.  For that matter, I know it was well out-of-fashion by 1943 to drop a Technicolor sequence into an otherwise black-and-white film, but I know of very few places where the arrival of Technicolor would've been more forceful than in a room suddenly filled at nightfall with the blue glow from a thousand bowls of radium salt.  You could even make it green, if you must.
This concludes the "notes" phase of the review, and it's back to things that are effectively perfect, which is to say, everything else that has to do with Marie and Pierre, and Garson and Pidgeon; the latter finds the film's truest character arc, and that's a precious treasure in any biopic.  It tracks his romance with Marie as it evolves over the course of a decade, until at last, in middle age, the film begins to suggest that, with the work of radium done (it was not done, but let's not let that bother us), their lives were only now beginning.  Pidgeon and the script tease out the most curious idea, that he has loved his wife so much that it is only in the most recent days that he's even noticed she's beautiful.  There's more that Madame Curie still has in store—a very, very, very long take of Garson, which is devastating and which LeRoy allows to play out for as long as it must, as Marie only quivers, physically wrestling back emotion or any expression at all beyond Garson's own cocked eyebrow (practically etched in stone), while a colleague tries to hector her back to life—but as a tragic romance, the real knife to the heart comes when Pierre goes to a jeweler.  He has never bought Marie jewelry before, and he is invited to describe what Marie looks like, and Pidgeon stumbles slightly, as if it's truly the very first time Pierre's ever thought about it at all.  That's love rarer than radium; and fuck this movie, I'm crying right now.
Score: 9/10
Posted by Hunter Allen at 2:35 PM