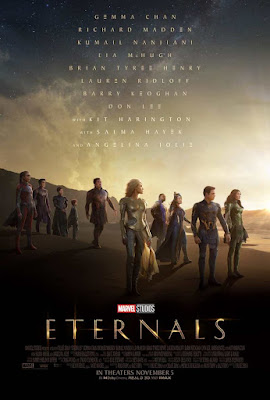 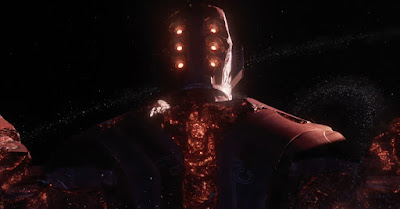 So here we are at a historic moment, the very first film of the Marvel Cinematic Universe to receive a "rotten" Rotten Tomatoes score.  Not Spider-Man: Far From Home, or basically all of Phase 2.  Nope, this one.  Hopefully, Chloe Zhao's enjoying her pair of Oscars for producing and directing Nomadland, because the backlash is here!
Or maybe that's unfair of me.  Eternals is, like all Marvel movies these days, chock full of problems.  A nitpicky one to start with is the title itself, lacking the "the" that should very obviously be there.  But more serious problems, as well.  Some of them are endemic to the Marvel process; some of them are plainly of its own making, and you can't blame Kevin Feige.  Most of them would seem like they should have been very easily solved, which is where I think the frustration kicks in, as you can clearly make out the shape of the better movie Eternals could be even while you're watching the movie we got.  I'll stake my position on it, however—it's not particularly adroit about doing so, but I think it transcends its problems.  Mostly, that's because of the sheer strength of its concepts, and those concepts are fucking rad.  The rest of it is because 1)it is exceedingly well-photographed for a Marvel movie, in that it's well-photographed whatsoever and 2)I could at least meet the film halfway for pretty much every character, managing to give varying fractions of a shit about each one, and sort-of comprehending their perspective, especially if I pretended that the dumber things they said didn't count.  That's a low bar, sure, but it's not the meanest feat for a film with this many major speaking roles (also with this much dumb dialogue for them to speak, but we'll get there), few of whom are even human people in the first place.  That overstuffed cast is the most blatant problem, but it's also the one I find easiest to forgive, since "a dozen flatly-characterized, not-fully-human figures" was somewhat locked in by the premise and by the source material (disclaimer: even I find these guys somewhat obscure).  But I don't think it grinds its gears that badly as it desperately flails around trying to find a dimension or two to give to each of its dozen characters, and even if in the end literally only one of them gets an arc that's completely satisfactory, it's a hell of a good one.
So: ten of those guys are our titular Eternals, and the Eternals are a group of immortal aliens who arrived on Earth 7000 years ago, sent here by a race of cosmic gods called the Celestials and cautioned never to interfere in human affairs except to guard our planet against the depredations of the Celestials' enemies, the so-called Deviants.  They're led by Ajak (Salma Hayek).  She has healing powers, and, like most of her subordinates, she has a "clever" name that indicates, often quite poorly, what human myths they inspired.  She's joined by her eight fellows, whose talents are more aggressive than "healing powers": there is Sersi (Gemma Chan), who can transmute objects, which is mainly useful (in this movie at least) to destroy said objects in baroque, sometimes-beautiful, sometimes-horrifying ways; Ikaris (Richard Madden), who's a Superman type (identified as such in dialogue, in a weird gambit I somewhat like); Kingo (Kumail Nanjiani), who can fire bursts of energy from his hands; Gilgamesh (Don Lee), who can manifest cosmic energy in the form of mighty blows; Thena (Angelina Jolie), who can use that energy to create an armory's worth of melee weapons; Sprite (Lia McHugh), who can cast illusions and turn invisible; Makkari (Lauren Ridloff), who has superspeed; Phastos (Brian Tyree Henry), who can create complicated machines (this is arguably not a superpower); and Druig (Barry Keoghan), who can control human minds. 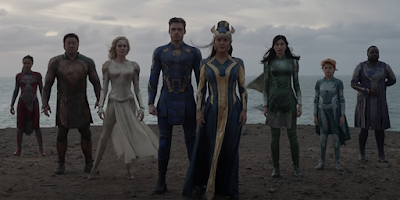