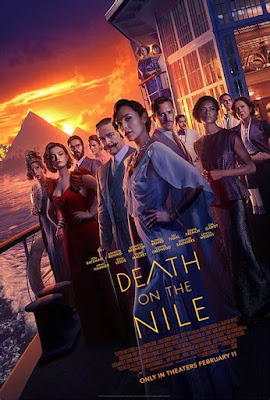 DEATH ON THE NILE
2022
Directed by Kenneth Branagh
Written by Michael Green (based on the novel by Agatha Christie)
Spoilers: moderate 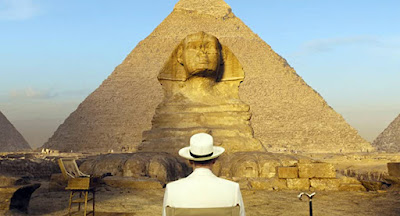 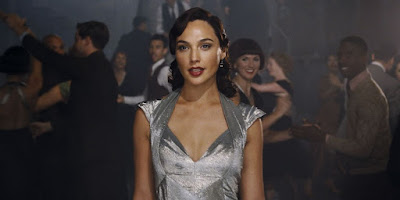 Leaving aside that this is a Poirot story that is much less "about Poirot" than Orient Express, which is not in any case a sin, it suffers from a noticeably worse script in almost every respect: not necessarily in terms of its mystery mechanics (better or worse, that's locked-in), but absolutely in terms of dialogue and pacing, which are the main vectors by which the sequel falls from the first film's "maybe this is not actually perfect, but it's close enough" to "sometimes this movie is actively bad."  It's the consensus critique that Nile takes too long to get started, and I won't argue with that too much—at two hours and seven, it's 13 minutes longer than its predecessor, and I'm certain it doesn't need to be.  But I don't hate that it decides to spend its first hour soaking up the vibe and atmosphere of fake Egypt and rolling along with some montages set to blues songs, rather than kicking off the body count right away.  (This is a surprisingly bloodthirsty film, incidentally, and by the end at least approaches what you'd call "a massacre.")
The problems are when it's not just vibing, most enervatingly in its repeated exposition dumps, the worst of which is a "meet the meat" spiel that slams into the film about a half-hour in and doesn't even seem to have been designed for you to retain any of the information it gives you, which turns out to be okay—though it shouldn't be okay—because all of it gets repeated later, in some cases more than once.  This is at least addressing a need, so one can be agreeable about it.  Worse is the overenunciation of theme that attends Green's screenplay, which might as well blockquote that entire Nazareth song about love.  Love has scarred, wounded, and marked any heart across our whole cast, each of whom are always very happy to explain to you precisely how love has hurt them and what they might do to hurt it back.  It disappoints even out of proportion to how bad it is, because Orient Express had gone out of its way not to do this, somehow never even saying out loud the word "jury," and trusting that you were smart enough to get it.  Of course, many of you were not, which is my explanation for how Green, who also wrote Orient Express, got so much more condescending in the interval between films.
It doesn't help that the cast is, on average, worse: Branagh himself remains very impressive, but he's saddled with a less varied Poirot this time around, thanks to the sadsack register Nile imposes on him; the screenplay doesn't ask too awfully much of most of its secondary cast, though what it does ask they often screw up, with perhaps only Okonedo out of the "definitely didn't kill Linnet" half of the cast rising to so much as the level of the script (Wright is genuinely somewhat lousy and drags down Bateman with her; Saunders is irritating though it's possible this is exactly what was asked of her).  The only time Branagh requires something interesting of the non-director members of the cast is with Hammer and Mackey, obliged to spit-scream hateful invective into each other's faces (it's a bit of a spoiler to even point at why it's interesting, though by being interesting, and by being unique in its focus on anyone other than Branagh, it comes up to the line of giving the game away all by itself).
There are other littler problems besides: the CGI that occupies every exterior shot is almost undoubtedly better than the first film's if you compare "the ten best CG shots in Orient Express" to "the ten best CG shots in Nile," but besides Orient Express already representing a subterranean bar for VFX work, there's so much more of it here that it gives Nile every opportunity to look deliriously fucking wonky.  It's not fair that this has become one of the things that's defined Nile along with its cast's respective scandals, but when its CGI is bad, it is destabilizingly bad, with some deflatingly cartoonish digital animals and background compositing so distracting that it emphasizes all over again how little Disney ever gave a shit about this movie, when they had over two years to fix it and apparently couldn't be nudged to spend a dime to do so.  (How this work could possibly co-exist in the same film as the de-aging effects on Branagh in the prologue is flummoxing.)  In any case, it reaches an apex with one of the braindead dumbest directorial flourishes I've ever seen, when the denouement offers us a match-dissolve from a CGI Nile to a CGI Thames.  (And this does not contend with Branagh's film-long motif of using insert shots of CGI animal predation of varying degrees of rendering quality as scene transitions, which is frankly a little thematically confused.)  Making matters worse, it's a denouement that shouldn't even be here, when the film already had ended with perfect emotional ambiguity, with the way Branagh puts that wistful ellipsis on the end of his final line, "perhaps...", leaving it up to you to decide for yourself whether Poirot ever gets laid again or not.  I mean, I would prefer "not," but that's because I prefer my Poirot to neither be human, nor have human attachments. 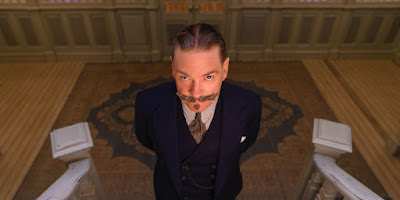 And for all that, I love it.  The acting that actually matters is solid-to-good.  I've shit on the dialogue, but it can be witty as hell ("the lucky ones die in childbirth!").  The mystery is a good one even if I personally managed to solve it from first principles thirty minutes before the victim had even died; it's a different kind of satisfaction from being surprised, but there's surely pleasure in being right and watching it all fall into place.  (The "how" eluded me till the reveal, and, in truth, that's by far the more important factor here.)
And though he's not above a misstep (I've certainly covered them), I will always prefer a filmmaker like Branagh, who makes real choices, even if he doesn't always know what those choices are for, to filmmakers who don't make choices at all.  Better yet, sometimes those choices here are exemplary: the climactic tableau is the best single shot I've seen in a movie in maybe years, and it's not even really that showy, just an extraordinarily precise combination of blocking, acting, and sound mixing (a major enhancing factor throughout the film, in fact), along with a tiny little bit of framerate manipulation.  Branagh is, at the very least, having a grand old time figuring out how to enliven what becomes a single-location film.  He has the luck to have one really superb location, and on this count, Branagh may actually get more out of Nile's riverboat than he did Orient Express's train (the big piece of visual continuity—besides both being shot by Haris Zambarloukos on sumptuous large-format film, of course; and besides the mustache—is the repeated use of lozenges of glass to once again refract our duplicitous suspects across the frame).  Jim Davis's production design, distinct from the CGI, is outstanding stuff, turning that $90 million budget into something you can see and practically feel, thanks to the full-size boat he just up and built, and plopped down into the middle of a Fox watertank so Branagh could do a bunch of dolly-shots all over it.  It's a beautiful set (Paco Delgado's costuming likewise), full of 30s ritz and elegance.  So is Branagh's direction: even with all of his customary kineticism, there's a stateliness and glamor here that's beyond any reproach, and that a movie like this can even exist in 2022 is miraculous.
Score: 8/10
*Oh right, The Magic Flute.  But you know what I mean.
Posted by Hunter Allen at 3:53 AM