What a disaster: Stop saying "tram" 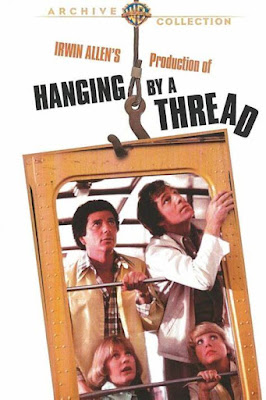 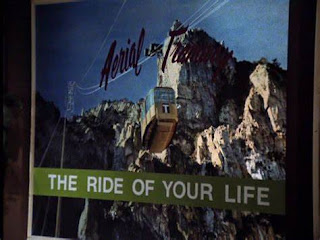 It's easy to lose track of, because it's ultimately a bad movie with the kind of premise that would seem to foreclose the possibility of even being watchable—"what if we made a disaster movie about seven people stuck in a malfunctioning tram on an alpine lift, and it's nineteen minutes longer than The Godfather?"—but Hanging By a Thread, Irwin Allen's third made-for-TV production for Warner Bros. Television, is actually a modestly experimental take on the genre as it stood at the end of 1970s.  For starters, it was a two-night event, which demanded a certain expansion of the basic material of "folks trapped in a tram."  Disaster films almost invariably require resorting to stereotyped template; but that runtime obliged screenwriter Adrian Spies to attempt to fully fill all his templates out, for want of noises between the commercial breaks, if nothing else.  And because 196 minutes is a really long time, he also throws in a thriller about one of his characters being hunted by the corrupt arms manufacturer he used to work for.  (That's not the experimental part.)
But there's the kernel of the idea, maybe never quite consciously-pursued, that if disaster movies are always to a large degree interpersonal melodramas thrown into sharp relief by the advent of some deadly peril, then why shouldn't there be a disaster movie that goes full-tilt at the chamber drama, caging a bunch of mutually-loathing characters in a small space with nothing to do but stew in the memories of each other's sins?  Hanging By a Thread is structured accordingly, utilizing that very-long runtime and frequent flashbacks to deliver enormous chunks of backstory for each of its principals, revealing what a bunch of pathetic scum most of them are.  Flashbacks are already a rarity in the genre, and this kind of curdled drama even more; it begins to resemble No Exit more than The Poseidon Adventure, and while even the artiest version of this screenplay probably couldn't ultimately end "oh, they're already dead and in hell," a pruned version plausibly could.  For a shockingly long time, this actually pays off: for a good two hours, Hanging By a Thread's combo of soap opera, paranoid thriller, and disaster movie procedural is slightly awe-inspiring, at least judged on the curve set by Allen's previous TV efforts, Flood and Fire, which couldn't even fill out 97 minutes without getting stale.  Plus, you'd assume that Spies and director Georg Fenady still have plenty of good stuff left, because at two hours, we still haven't solved the problem of how they get down without going "splat."
And then it winds up worse than either of its predecessors anyway, possibly the worst disaster movie we've surveyed.  Other than The Cassandra Crossing, it's the keenest betrayal we've seen so far, perpetrated by a movie that spends a long time earning your attention and purring along pretty well before just spiraling out into nothingness in its third act.  Or fourth act?  Well, it's not a screenplay that has "acts."
Our victims arrive together, presently numbering six.  These are the members of the self-styled "Uptowners Club," a collection of the richest richies in whatever suburb these people live in.  They've been gathered here at the behest of the owner of this little tourist attraction, Alan Durant (Bert Convy), to celebrate the culmination of his years of sad pining over Ellen Craig (Donna Mills), who has, in the past several months, gotten a divorce and finally agreed to marry him, though you win no points for guessing that for Ellen this is a complete capitulation and she's settling for the first guy to show up.  Along with them come their likewise-coupled friends, Sue and Jim Grainger (Patty Duke and Burr DeBenning) and Eddie and Anita Minton (Oliver Clark and Joyce Bulifant), as well as Ellen's son Tommy (Michael Sharrett).  Tommy complains that his dad's not here, though of course he isn't: Paul Craig (Sam Groom) walked out on them ages ago.
But who shows up after all, but Paul—for as we know, though Ellen doesn't, Paul's vanishing act wasn't a willful abandonment, but an act of patriotism, as Paul's been stowed away in various safehouses for months by his FBI handler Mitchell (Roger Perry), marked for death thanks to his whistleblowing, and presently preparing to testify and afterwards start a new life in witness protection.  Mitchell, the softie, has permitted Paul to see his wife and son one last time, though God knows why they think this isn't fundamentally shitty and selfish, and wouldn't just be re-traumatizing even if it all went according to plan.  Nevertheless, Paul is welcomed, and, to his credit, he wishes Ellen and Alan luck, joining them on their trip up the mountain.  The catch is that Alan's been ignoring warnings of summer lightning all day, and one such bolt strikes the tram while they're in it, fusing it in place while damaging the cable.  It's not an immediate death sentence, but they don't have long—eventually that cable is going to snap and send them plummeting to the earth below, and the high winds that the storms have kicked up are going to make air rescue awfully difficult.  So they wait to see whether they live or die, occasionally making efforts to ameliorate their situation; but mostly they use their potential last hours on Earth as an excuse to vent all their long-suppressed feelings at each other. 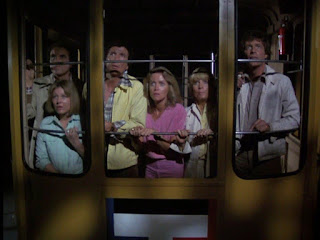