So did she ever actually get her period, or what? 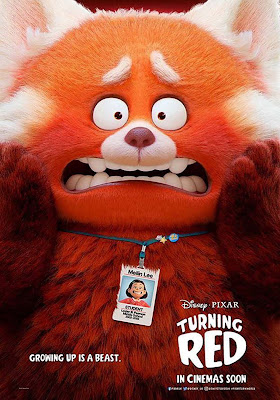 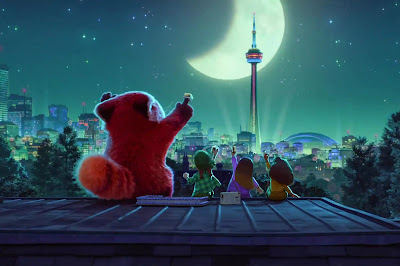 The animated features of the Disney corporation—and this goes for Walt Disney Animation Studios, obviously, but just as much for their cousins at Pixar—have had a problem, going back several years, at least all the way back to Tangled, of having what feels like uniformly aggravating trailers.  It's as if the dictate in every case has been to sell the movie as the least sincere version of itself possible.  To this end, gags are removed from their context and sarcastic bits lifted from the flow of the dialogue, and then edited together for intensely annoying two minute experiences.  I don't know, maybe they were just as annoying in the 90s and I'm just not twelve anymore.  The upshot, anyway, is that Tangled looked annoying; Inside Out looked annoying; Zootopia looked annoying; The Incredibles 2 looked annoying; Soul looked annoying; God help me, even Moana looked kind of annoying.  And so I've been well-trained to ignore any trailer for a Disney animated feature as thoroughly unrepresentative of the work itself; and yet over the past few years they've become less a lie told on behalf of snagging sugar-addled youth and more of a window into what the film would in fact be.  The trailers for Ralph Breaks the Internet and Raya and the Last Dragon and Luca made those movies look annoying, and lo, they were very annoying. You see where I'm heading: Turning Red, feature debut of director (and co-writer) Domee Shi, formerly of the extravagantly good Pixar short film "Bao," looked real damn annoying, like being annoying was a fundamental part of its narrative weave.
It is, and this is borne out very quickly, so before I get too far, let's concede there's at least an intentionality to how annoying Turning Red is.  It's a film about pubescent kids in 2002 and as far as big-budget family animation goes, it's as "naturalistic" about this fact as it could potentially be; accordingly, it's rather high-pitched and wearyingly manic (relax, cop: this would be the case if it was about boys, too, and thankfully it's irritating in rather more useful ways than Luca, which was evidently irritating just to give its characters noises to make).  There's the sense that Shi knows this, then, even if she is absolutely too forgiving of it, and both the awareness and the permission she affords her film to just melt your face off in its obnoxiousness are on their fullest display in its very opening gesture, a startling direct address from our heroine, 13 year-old Meilin Lee (Rosalie Chiang), who hypes herself to the heavens as she describes how unbearably rad she is while also appearing to bug most of her classmates at school, as well as nearly every single person on her trips between there and her home in Toronto's Chinatown. 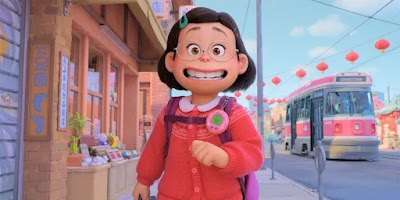 She's found partners in what looks like some overtly dire uncoolness, though they appear to be largely accepted by their peers, in the form of her three color-coded best friends, Miriam (Ava Morse), Abby (Hyein Park), and Priya (Maitreyi Ramakrishnan), whom the Wikipedia summary insists have individuating character traits and not just green, purple, and yellow clothing.  (In Abby's case this is fair enough, though if not for exposition to the contrary, your guess from her behavior and character design would be the other three girls had unaccountably befriended an unruly toddler.)  Either way, their acceptance is something of a lifeline for Mei, whose home life is, let's say, more narrowly-defined, thanks to her overbearing mom Ming (Sandra Oh) and disengaged dad Jin (Orion Lee).  Ming insists on grades and discipline, and is not above employing Mei as uncompensated labor at the Lee family business, a tourist trap Chinese shrine dedicated to their family's apparent mascot, the red panda.  But Mei will shortly learn that the legend of her foremother's transmogrification into a red panda should be taken literally, and that, as Ming says, the gift of the gods to the Lee family has become in the centuries afterward "an inconvenience."
So, it's the one where the girl turns into a giant red panda in Hulk-like fashion upon the onset of puberty, do you get it? she's "turning red," wink wink (and also suddenly covered in fur).  Implicitly, however, this is a little earlier than her parents expected—the first thing you may narrow your eyes at is that Ming and Jin have never broached this issue despite its paramount importance, though they do appear to have discussed what "periods" are, and assume that's what Mei is losing her shit over.  Yet, so far, this ain't bad at all, and there's something appealingly novel to the prospect of an animated film being this direct about periods, so much so that were I a Disney shareholder, I would be furious that they missed an opportunity for some unique product placement.  This bold menstrual metaphor is reframed about as soon as the talking point is presented, unfortunately—unless I missed that moment in 2002 when girls all over Canada monetized their menarche for display to select audiences.  I assume it would've made the news.
You see, following her initial confusion and fear, once Mei learns to stay steady and bring out the panda only upon command, she embraces the transformation, establishing a brisk business with her classmates to "see the panda" and, like I said, the metaphor has been shifted.  Her parents, meanwhile, get things ready for the ritual to dispel the panda, anxiously awaiting the next red moon; but as Mei's feeling her oats, she rebels when the date conflicts with the goal she's been pursuing with her panda show side-hustle: seeing her favorite boy band, 4*Town, when they arrive in Toronto. 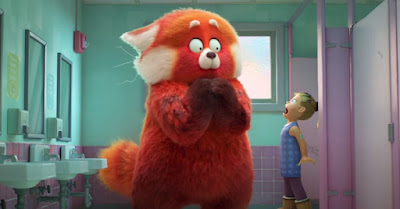