Who is your favorite fearless hero? 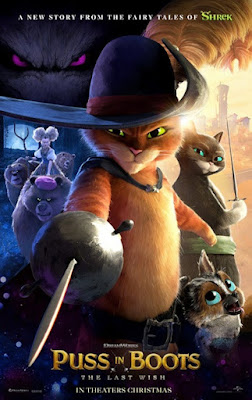 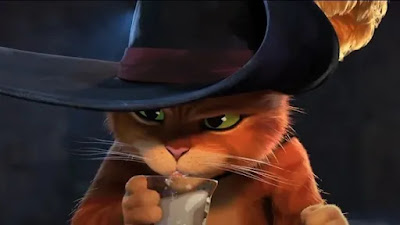 I have, I hope, made it abundantly clear how much I've come to appreciate the existence of DreamWorks Animation.  They've been the sole studio to remain a reliable and effective counterbalance during this current period of American feature animation, the Walt Disney and Pixar Inexplicably Suck Now Era, which as the name implies is not as yet fully understood, but has threatened to condemn the medium to its dreariest state in, at least, a decade and a half.  Indeed, this past year gave us cause to worry that clouds could still take our only sunshine away: we witnessed DreamWorks suffer its first stumble in six years and seven features* with The Bad Guys, a film that suddenly reminded us that the studio's peculiar approach to the medium—to seemingly seek out the world's dumbest ideas so they could turn them into bright, poppy, stupid-brilliant cartoons—actually could result in a bad movie.  Fortunately, with their second feature of 2022, we can breathe a sigh of relief, because DreamWorks obviously has much life left in it.  The film that proves this, Puss In Boots: The Last Wish, isn't even that dumb an idea itself, or at least not a dumb idea in execution.  It's worth conceding that the underlying concept, "Zorro, by which I mean literally Zorro, is a cat now," a character introduced in the Shrek series and spun-off into his own eponymous solo feature in 2011, is a somewhat dumb idea.  Likewise, "an eleven-years-later sequel to Puss In Boots, continuing (via sub-franchise) DreamWorks's most-successful overarching franchise," could potentially be called a desperate idea, but desperate is different than dumb, if maybe not necessarily something that instills confidence.
Well, we can dispense with that.  Sure, it might be a little desperate: of the surviving American animation studios, DWA may remain the most tenuous, so let us not begrudge them a fiendish addiction to sequelizing every single profitable film they produce.  Particularly since another one of the studio's special tricks has been sequels that are significantly better than their predecessors, and in the form of The Last Wish's director, Joel Crawford, DreamWorks has assigned to the task before us a man who, with 2020's The Croods: The New Age, already demonstrated he could make awesome DreamWorks sequels even from terrible DreamWorks originals.  Puss In Boots was already high-tier DWA in first place, and whether that made the challenge more daunting or less doesn't really matter when this sequel's story affords it such an amazingly crystal-clear right to exist.
Crawford deserves a slightly more robust treatment than directors of big-ticket CGI animated films would usually get, however, because I'm not sure I can name many other people operating in that role who are more obviously the directors of the movies they've made, that is, who have a more identifiable style to their filmmaking.  This is to the extent that when I put his name in the tags only to realize that I'd used it in a review before, I mumbled to myself, "then it couldn't have been anything except for Trolls Holiday, where I said something along the lines, 'I hope this Crawford fellow gets all the opportunities he needs, because he's got one hell of a sensibility,'" and evidently DreamWorks heard my prayer, because they've been giving him those opportunities fast and furious.  He's latterly become the presumptive leading light of what we might as well start calling the DWA Renaissance, now that WDAS has gone through two and doesn't look like it's going to start a new one anytime soon.
That sensibility, then, is very much "of DreamWorks," and obviously applicable to DWA's bread-and-butter, their gag cartoons, but it's something of a perfection of it.  This is shown with the flawlessly-built gag delivery device of Trolls Holiday, a 26-minute short released in 2019, and moreover in his feature debut, that Croods sequel, the latter of which is basically Trolls Holiday's sensibility applied to a feature's length, if—I don't want to say "burdened"—but at least channeled and constrained by the need for a feature-length narrative.  Crawford rose out of the ranks of DWA's story artists, which is a good place to develop the skills he has, which could be reduced to something nebulous like "timing" or "punchiness" but I think could be better-described as an expert grasp of how to use the boundaries of a film image to prosecute comedy, concertedly using the limits of that image, both physical (the frame) and temporal (edits), to really sell the shit out of a humorous situation.  This is ordinarily very punchy indeed in its effect, rolling off a litany of individualized gags, usually pretty strictly one-per-shot but with a lot of quickly-cut, rhythmic visual matching.  The real tell is the willingness to cut at the exact moment the gag makes itself known.  It's recognizable enough that I would bet money that though he was still but a story artist, I'd be correct to identify him as the mind behind the best sequence in Trolls, the quick-cut musical montage of Poppy seeming to repeatedly die, saved solely by the fact that edits happen before she gets eaten by monsters—and this sequence, incidentally, gets a zesty conceptual callback in The Last Wish.  That strategy is also very much apparent in its bravura opening sequence—as are about half a dozen other strategies, far too many to equally-laboriously describe—which involves a party, a musical number, jokes about celebrity worship and how cats enjoy milk, swashbuckling action, and, ultimately, an angry giant.  Though at the end of it our (favorite fearless) hero, legendary outlaw Puss in Boots (Antonio Banderas), does die.