The movie that does not advocate the cool crime of robbery 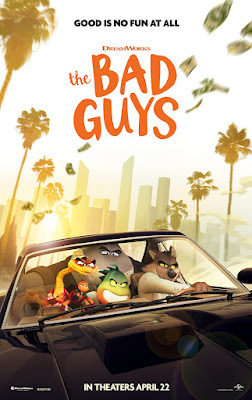 THE BAD GUYS
2022
Directed by Pierre Perifel
Written by Etan Cohen (based on the book series by Aaron Blabey)
Spoilers: mild

It surprises me to realize it, because it managed its ascent so quietly, but DreamWorks Animation really is my favorite American animation studio currently in operation, and while I've said things in the past like "if this keeps up..." and "they sure have turned themselves around!", I think I'll just explicitly commit to that position, despite the irony bomb that'll go off before the third paragraph.  This has been, of course, in larger part simply because the Janus-faced monster of Walt Disney Animation Studios and Pixar has lately gotten so inexplicably bad, and because Laika vanished, so that all DWA even had to do here was to keep diligently making consistently good cartoons in the pop cultural background and with half the resources of their peers, and they were bound to overcome their competitors eventually.
However, this is not solely the result of absent or inept adversaries.  It's also down to DWA's uncanny ability to spin gold out of straw, so that, in between How to Train Your Dragon movies, they've spent more than a decade now positioning themselves as the undisputed masters of turning extraordinarily bad concepts into superb animated comedies, with at least eight movies since 2010 that should not work, but do work, and beautifully.  Something coalesced for DWA around 2016, where bad-concepts-turned-into-good-movies became almost their entire output, their entire corporate reason for being.  And so I honestly do understand why The Bad Guys would be the kind of challenge this studio would need to take on.  It is the worst concept.  By corollary, would it not make the best DWA movie?  That's logic.  I guess I have to respect DWA banking everything on their peculiar genius at elevating the cringiest material, but I was right to mistrust even this studio with this concept, which is, put briefly, "it's so Ocean's 11 that you'd need to hide behind 'parody' to avoid the lawsuit, but now they're talking animals and they learn a lesson about why stealing is actually wrong."
Well, it looks splendid, by which I mean the technology (maybe more aptly, the technique) is splendid; there's something here that I really want to see get worked out further.  The fact that The Bad Guys wound up reasonably successful for an animated theatrical release in 2022 means, unfortunately, that it may get worked out further with these characters and in this world.  Those characters then, are the self-styled "Bad Guys," a band of thieves led by a Wolf (Sam Rockwell) who only fails to literally be Danny Ocean not so much because he's a wolf, which is incidental, but because he wears white suits while committing crimes.  Mr. Wolf invites us to ponder the mythology of his kind and the epochs-old racial animus we've borne against the idea of the Wolf, and consider which came first, his antisocial behavior, or our judgment, and I will try very hard to just get through this plot summary cleanly, though I will point out that to the extent the mythological wolf represents anything besides actual wolves, it tends to represent rape and slaughter, rather than carefully-plotted movie heists.  In any case, Wolf has gathered unto himself a collection of such quote-unquote predators: the flexible Mr. Snake (Marc Maron), the hacker Ms. Tarantula (Nora Lum), the master of disguise Mr. Shark (Craig Robinson), and the violence-prone Mr. Piranha (Anthony Ramos).  We follow along as they pull off their latest job, bamboozling the irascible, also violence-prone police chief (Alex Borstein), but in the aftermath Wolf finds himself piqued by the condescending public statements of Governor Diane Foxington (Zazie Beetz), a red fox, who frames these villains more as pathetic figures of contempt than true threats to the social fabric.

Yet it's even disappointing, because for about a minute right at the beginning this script is just Rockwell and Maron doing, like, a Tarantino riff with jokes specific to their animal species.  It is by such a huge margin the best dialogue in the movie you have to keep wondering why so much of the rest of it is just Goddamn farts, and nervous jokes about how hard they're trying to be cool ("but aren't they still p-pretty cool?" the film stammeringly whispers).  The final act, meanwhile, is abjectly fucking insane: even to the extent any of this had any cohesion, it's obliterated completely upon contact with the sci-fi conspiracy and the Pixar-on-acid chase bullshit that dominates the climax.
Oh, and don't think I overlooked that two of the seven animals in this exclusively terrestrially-set film are fish.  I noticed.  Aesthetically, this movie needs to be studied, intensely, by anyone with an interest in the art form.  Narratively, this movie alternates between a complete failure mode of the DWA model and simply making me feel like my skull's caving in.
Score: 4/10
Posted by Hunter Allen at 12:12 AM