And here's to Nagasaki, always a bridesmaid, never a bride 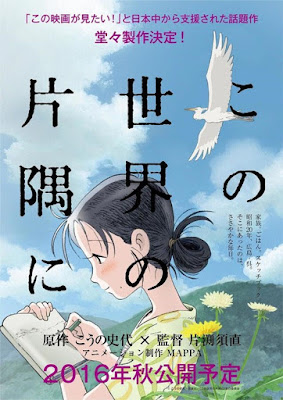 IN THIS CORNER OF THE WORLD

A microscopic take on the defining tragedy of modern Japan, In This Corner of the World combines great beauty with great horror; but it turns out, in the end, that its chiefest concern all along was just telling a story about life.  Sounds lame, I know, but it was pretty great.

Spoiler alert: mild; spoilers are severe for a famous anime made in 1988, however 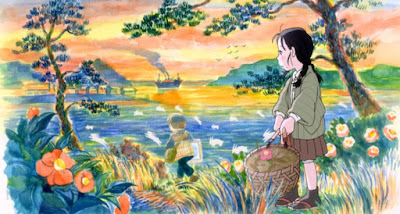 There's probably some hypothetical way to write about In This Corner of the World that doesn't mention Grave of the Fireflies—the ur-text, at least in animation, and at least on this side of the Pacific, when it comes to cinematic representations of Japanese privation on the homefront during World War II—but, by the same token, there's no way to actually do that without indulging in outright willful obstinance about it.  So let's not, and just go ahead and compare them directly, since, after all, it's clear that Corner's asking us to do exactly that.

While acknowledging that Fireflies is in some sense more emotionally potent—for whatever else Corner does better or worse than Fireflies, Corner's two hours aren't spent exclusively upon the grim spectacle of two children literally starving to death—I think Corner still might be the superior film.  It is, perhaps, something more of an artistic accomplishment anyway, starting with a protagonist who's simply more likeable and specific; continuing on, through a more-flamboyant visual aesthetic; and concluding, ultimately, in scenes of wartime awfulness that, because Corner has not primed us with such terrifying overdetermination, may actually hit harder.  Yes, I know: "possibly better than Grave of the Fireflies" means In This Corner of the World has laid out for itself some absolutely titanic shoes to fill; but, to its credit, it wears them very well.

On the other hand, it's a little unfair (and a little parochial, which is a nice way of saying "racist") to start talking about this movie only by reference to another.  Certainly there can be more than one Japanese classic about the war at home; if anything, it's surprising there aren't more, or at least more that are visible over here.  While there's a fair number of Allied-nation treatments of the subject, somehow, the only ones I turn out to own are Japanese (and a German one, too, I guess, though I would respect your disagreement if you said Downfall doesn't really count); but the reason might be that the Japanese homefront is the most intriguing of them all.  American and British homefront stories are about life going on whilst death and danger is suffered in distant lands by people we often don't even meet—French homefront stories are about occupation, and German and Soviet homefront stories tend to degenerate into straightforward extensions of frontline combat—but Corner gets at the uncanny feeling of trying to exist in a country that's never once been invaded, yet shall, nevertheless, soon be conquered.  The tension that drives this film, therefore, is the tension between the very ordinariness of life, on the one hand, and the ever-present specter of instantaneous destruction, on the other, as the distinction between Japan's front and homefront dissolves entirely in the face of the most indiscriminate form of war ever loosed upon humankind.

Not that it begins in the midst of the Pacific War.  In fact, Corner begins nearly as far back as its heroine Suzu Urano does, when she was a child in the 1930s, a native of the rural Hiroshima countryside.  Suzu, by her own admission, has a hard time paying attention to anything in her life, unless she can draw it, and when we meet Suzu, she's busy entertaining her younger sister with childish (but not untalented) comics, and doing art homework for the boy she likes, Tetsu.  Altogether, it's a nice life; or, anyway, a comfortable stasis.

But time marches on, as the film takes pains to remind us with its surfeit of onscreen title cards, naming the year and the month, and ultimately the day, and even the hour.  It is not subtle in this regard, and obviously, from the moment the word "Hiroshima" is uttered, there was never going to be any pretending that Corner was not counting down to that fateful moment on August 6, 1945.  Corner is, of course, still pretty overdetermined, in comparison to any movie not named Grave of the Fireflies.  It shall not surprise you that the film often uses its predestined terror to elicit a cruelly visceral response from its viewer, like with the crushingly literal foreshadowing represented by that big vertical raincloud, rising in the sky above Hiroshima Prefecture, or that elegantly mean-spirited moment when Suzu, having moved a few miles to Kure in the interim, considers moving back to Hiroshima, which pulled a physical "nope nope nope" head-shake out of me, at least.  Naturally, it needs you to care about Suzu and her family in order to work even a little; it accomplishes this almost effortlessly.

The bulk of the film does take place in her adulthood, after moving to Kure at the behest of her new and more-foregrounded family, the Hojos, who acquired Suzu through the surprisingly simple expedient of their son Shusaku just walking up to her parents one day and asking if he could marry her.  And an outright shocking amount of Corner's power comes from nothing more earth-shaking than Suzu's Before Times familial drama, unfolding in the ways she awkwardly navigates a mostly-pleasant new household (her sister-in-law Keiko, perhaps excepted, though Keiko is as humanized as anybody else in the cast), and in the ways that Suzu's unchosen marriage does not take anything like the forms you'd expect.  Armed with these gentle strengths, Corner could plausibly be a pretty great movie without reference to any atomic bomb at all.  (I guess that's what makes it such a great movie about the atomic bomb.)  But inevitably, the war closes in offscreen, month by month and year by year.  It becomes one more fact of life in Kure.  Raids on the naval arsenal are both frequent and deadly.

The war provides a shape and direction to a story that, at its slackest, really doesn't seem to be one, and the problem with it, such as it is (and I expect rewatches will flatten this "problem" into practically nothing) is how herkily-jerkily episodic its first hour or so is; Corner, already not exactly short at 129 minutes, is one of those rare movies that would benefit immensely from being significantly longer, in order to give those earlier scenes more room to breathe.  As it stands, director and co-writer Sunao Katabuchi makes a deliberate decision to fly through the material, letting the days flash by so quickly that it's much too easy to become dislocated and disoriented (perhaps as a nod to the unreliability of childhood memory; but perhaps not).  The character design doesn't do Katabuchi's swift pace and mercurial focus many favors, at first, either; Corner opts for a somewhat cutesy style to its characters, which makes everybody kind of tiny—slightly too-large heads and very, very short, and not in the way that Japanese people are kind of short by reference to ethnic Europeans, and more like the way children are short, and Suzu, called out in the screenplay as being atypically small even in this milieu, ages more noticeably between the ages of 18 and 19 than she does between 10 and 18 (and that's entirely thanks to the "acting" her animators put on the paper).  It is, regardless, a good design—maybe not the aptest for a coming-of-age story that takes you through the adolescent decade of a short woman's life, but pleasing, even so, and at least it's not noodle people—and, as intimated, there's nothing in regards the physical frame-to-frame realization of its characters to complain about at all.

Which is as good a jumping off point as any to talk about how lovely the movie is.  (Admittedly, it's not even the most lovely piece of Japanese animation from its year, but we know that Makoto Shinkai doesn't fight fair, and this says far more about how unbelievably pretty Your Name is than it says anything about Corner.)  Katabuchi went for an almost-unnecessarily faithful approach—significant time in Corner's pre-production was spent recreating Hiroshima and Kure, and actually interviewing people who lived there for assistance with the film's geography; it's not remotely clear how this paid off, but I expect it's a symptom, rather than a cause, of the perfectionism that marks this film out as something special.  Those character designs, as noted, are (whatever else) terrifically appealing, soft and humane and sympathetic (and sometimes pitiable—the only one made out of anything close to sharp angles is Keiko); the backgrounds are gorgeous, so green and pastoral and rendered upon the medium with just the right level of abstraction to feel a little daydreamlike without drawing undue attention to themselves. 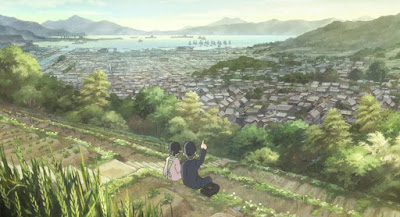 Its an impressionist grounding for the film's even higher flights of fancy; its main character being an artist, Corner gives itself the excuse and opportunity for a great deal of formalist playfulness.  Sometimes it commits itself to beauty for the sake of it (the poetic license of cresting waves as "white rabbits," translated literally by Suzu's paint, is almost unfair in its quiet, childlike wonder); sometimes it's mere ironic counterpoint, reflecting Suzu's own enduring whimsy (as when the multicolored flak of an air raid becomes splotches of oil paint on an endless blue canvass, which is the way Suzu perceives it); and, at what amounts to the film's turning point, it travels fully inside Suzu's aesthetic perception of the world, right at the moment her world shatters.

In its way, Corner never does completely allow itself to become a movie "about" wartime Japan; it's a movie about Suzu Hojo, nee Usano, who just happened to live in wartime Japan.  (Somebody could make an argument that the way it uses the atomic bombing of Hiroshima is not entirely sensitive to the event itself—the film is not above letting you read it as a great tragedy whose main significance is as a metaphor for Suzu's own drama—but I would not be that person, and one of the most satisfying things about Corner is the way it uses symbolism to structure a meaning for Suzu's seemingly-meaningless life.  It is a hopeful film, despite everything.)

As a result, Corner also outlasts what seems like the "natural" conclusion of its story, though this is one of the best decisions it makes—think of the last few seconds of Grave of the Fireflies, except now it's about twenty minutes instead, and neither so emotionally dire (at least not in the same exact way), nor so bluntly meaningful.  There's meaning to be found here, too; but it's in the little things.  Time marches on.  Life does not stop.  Not even in this corner of the world.