Beauty isn't everything, it's the only thing 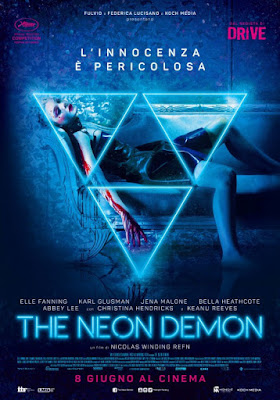 Something this ravishing can be just as superficial as it wants—especially when superficiality is its whole damned point.

What goes up, must come down 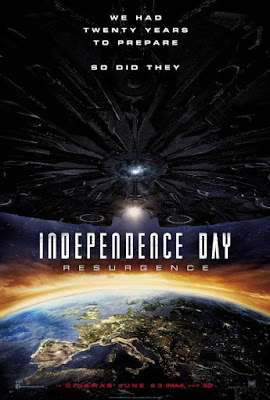 It resurges, all right, and then just slides slowly away...

Read more »
Posted by Hunter Allen at 8:56 PM No comments: 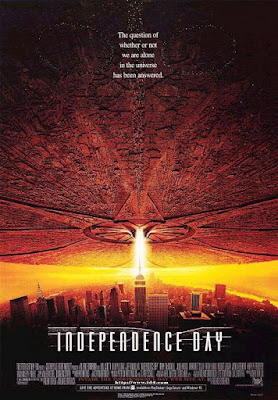 Probably the best straight-up alien invasion film we've ever gotten—or, at the least, the most excessive—Independence Day will live forever.

Steven Spielberg, part XXXV: Everyone will hate me, but at least I'll lose 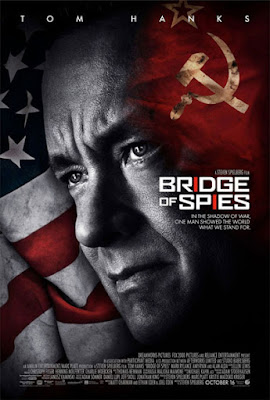 The story itself is just a little dull, so instead of talking about that, roughly half of this review is dedicated to the great/terrible cinematographer, Janusz Kaminski, Kaminski's undiagnosed compulsive disorder, and Spielberg's morally-unsound enabling behavior toward his poor DP.

Spoiler alert: N/A
Note: this is a re-edited and slightly expanded version of a review written in February 2016, the major difference being that I've mildly softened in my visceral reaction to Kaminski's body of work—it helps that I've seen practically all of it condensed into a couple of months; but, never fear, my disgust has certainly not softened when it comes to his work in this film
Read more »
Posted by Hunter Allen at 5:20 PM No comments:

Water, the source of all life 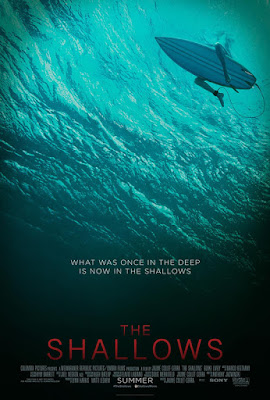 The Shallows wears the skin of one of my favorite movies, while feinting toward the substance of another, and if it doesn't reach the heights of either one, well, that's not its problem, because it's still the best treat of the season so far. 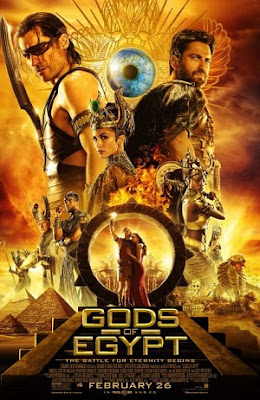 I realize I have no actual right to be disappointed—I was warned, repeatedly, by everyone—but here we are, and disappointed I am. 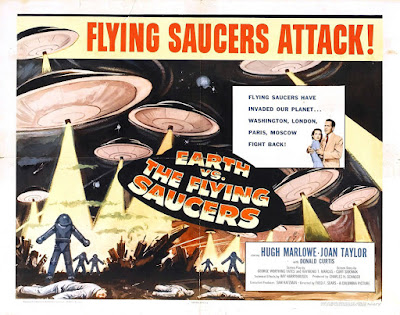 Spoiler alert: moderate
Read more »
Posted by Hunter Allen at 7:49 AM No comments: 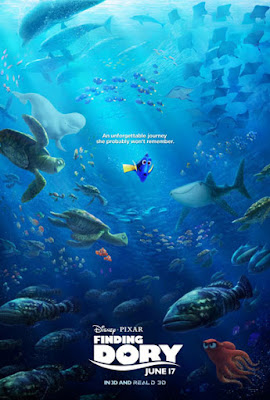 Steven Spielberg, part XXXIV: For example, to prepare for the role of Abraham Lincoln, Day-Lewis was actually elected President of the United States 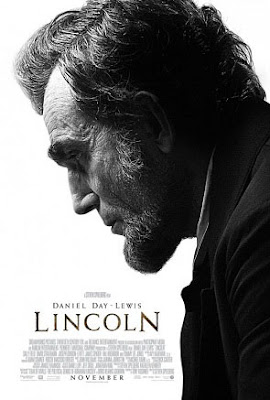 As a history lesson, Lincoln is a worthwhile sit, even though it's a long one.  As a cinematic object, however, Lincoln is a decidedly flat experience.  It is elevated by its rarefied acting and interesting character work, but not to the point that you'll find me wholeheartedly recommending it; but then, movies about the political process are just about my least favorite thing in the world—so, please, consider that a disclosure of my bias.

Steven Spielberg, part XXXIII: Fantastic beasts and where to find them 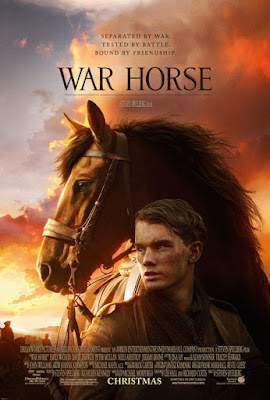 Spielberg once again goes to war, and this time he brings a horse named Joey, whom you do slowly grow to love (even if you aren't very likely to love any of the hardly-glimpsed character sketches that surround him).

2011
Directed by Steven Spielberg
Written by Lee Hall and Richard Curtis (based on the novel by Michael Morpurgo)
With Jeremy Irvine (Albert "Albie" Narracott), Emily Watson (Rose Narracott), Peter Mullan (Ted Narracott), Lyons (David Thewlis), Tom Hiddleston (Capt. James Nicholls), Benedict Cumberbatch (Maj. Jamie Stewart), and so on and so forth, there are an awful lot of people in the film, and also many horses 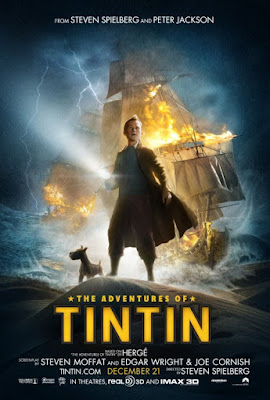 THE ADVENTURES OF TINTIN

Spielberg teams up with Peter Jackson for a throwback adventure into the past, rendered with all the tools of the future, and the film they made together is truly something to behold.

There's not enough garlic butter in the world 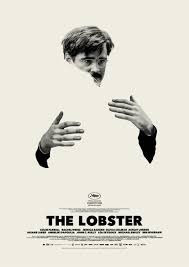 Is it possible that 2016 might be an even worse year than 2015?  The Lobster affectlessly argues, "Yes."

Give my regards to King Tut, asshole 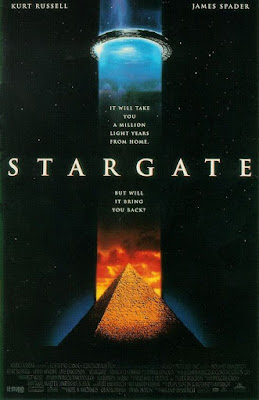 For preserving space opera between Return of the Jedi and The Fifth Element, Stargate absolutely deserves its cult. 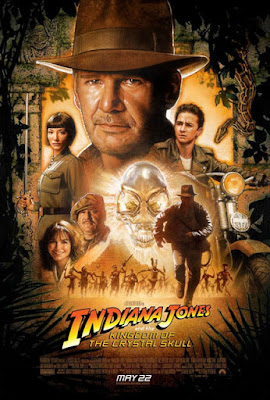 INDIANA JONES AND THE KINGDOM OF THE CRYSTAL SKULL

Hardly the travesty of the holy Original Trilogy that crybabies constantly say it is, the fourth Indy film is actually a rather fine adventure movie that does almost everything it does pretty damned well—but, unfortunately, does very little perfectly, which I'm afraid does set it decisively apart from its predecessors.

Spoiler alert: you saw it, and you probably hated it

Read more »
Posted by Hunter Allen at 5:00 PM No comments:

Cardboard Science: Do you think you'll be able to respect a husband that probably pulled the scientific boner of all time? 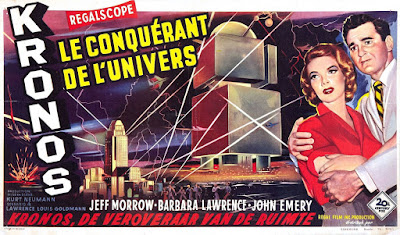 As we briefly pause in our retrospective on the science fiction of George Pal, let's instead take a glance at something a little lower-fi: namely, Kronos, the 1957 sub-classic that must be counted as one of its decade's most successful attempts at depicting a full-scale alien apocalypse. 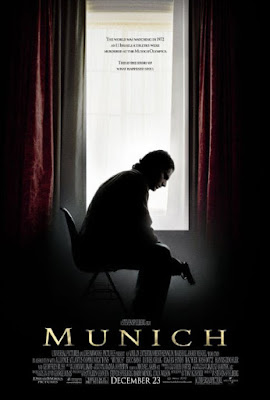 Munich was its director's last masterpiece for a good long while, but a masterpiece it was nonetheless.  Whatever else, you still have to admit that taking on the Israeli-Palestinian Conflict represented a somewhat braver thing than simply suggesting that the Holocaust was bad.  Plus, do you know how many cool explosions Schindler's List has?  That's right.  It has none.

Spoiler alert: to the best of my knowledge, Israel never faced another terrorist attack again

Read more »
Posted by Hunter Allen at 4:28 PM No comments: