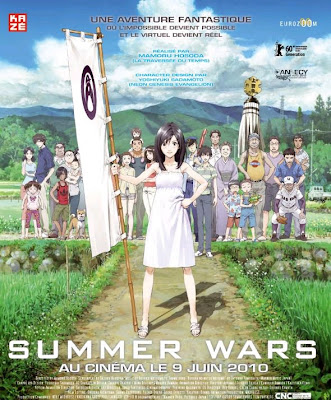 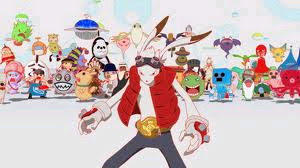 "You like that Internet shit?  Isnt it fucking EXTREME?!!!!11one"

The key problem with deadly-Internet movies, and hacking movies in general, is how dull real computer science is to look at.  I don't know a heap from a hole in the ground, but I do know that it is not particularly interesting, visually.  So resolution of this issue usually involves some artistic license.  The license taken in Summer Wars is, well, a little excessive, and fails as both verisimilitude and storytelling—though it is kinda pretty.

Natsuki is a mostly normal human being who does not want her aging grandmother to go to her grave before seeing her granddaughter engaged.  To this end, she enlists her mathletic college classmate, a Stereotypical Japanese Male Protagonist Mark II named Kenji, to pretend to be her intended, and to travel with her to the  dowager's 90th birthday. 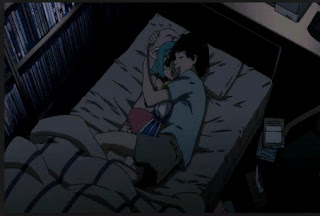 Welcome to the NHK, an old favorite, featured a couple of the even less socially capable Mark I's.

I must make this totally clear: Michael Sinterniklaas is excellent casting for the English-language voice of Kenji, insofar as he's honed his American developmental arrestee to a razor's edge.  The greatest joys of Summer Wars come not from the high-concept apocalypse that's about to unfold, but his evocation of a really put-upon Venture brother.  Unfortunately, perfection so often eludes us in this world, and it seems Lisa Hammer wasn't available to do Natskui. 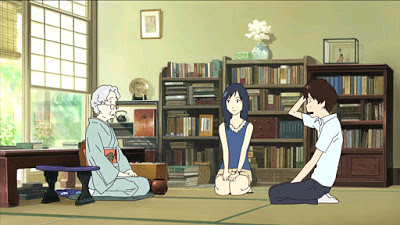 We find Jinnouchi Sakae, professional grandma, living in a Goddamned castle in the Shinshu countryside.  She has, it is quickly revealed, been a remarkable evolutionary success, with literally dozens of descendants descending upon her palatial home for the festivities.  In fact, she has so many direct and indirect offspring that it's almost not totally unbelievable that so many people who come together at the festivities wind up indispensable to the plot.

Kenji is, of course, terribly overwhelmed by this multitude of idiosyncratically obnoxious, if largely good-hearted, folks.  Not surprisingly, he does come around and his heart grows three sizes, since this is a movie and being an introvert who finds constant social interaction with annoying people exhausting is his problem.

Maybe this exhaustion is why he unthinkingly solves a random math puzzle that arrives on his phone from an unknown sender, which when finished turns out to provide the secret key to his encrypted admin account for OZ, his employer.  It has nothing to do with Treize Khushrenada, but is instead a Facebook Google Amazon AOL Compuserve iUniverse Standard Oil thing, roughly synonymous with the entire Internet.  It kind of looks like Heaven from Bill and Ted's Bogus Journey. 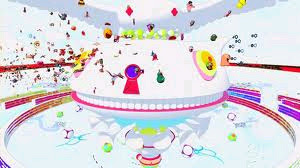 "Welcome to OZ.  Here at OZ, we are constantly exploring new frontiers in the most inefficient possible way to arrange data for humans to use."

It's perfectly normal that you're laughing and laughing (though it's probably even more normal if you aren't), because lightning calculator or not, he just factored an incredibly large number in a few hours, a feat which should take him a couple of years, if he used a bank of computers, which he doesn't.  It's okay, though, because earlier in the movie, they showed a closeup of a textbook Kenji was reading, specifically the pages on Shor's factorization algorithm.  It's amazing how little hay is made of the apparent fact that Kenji is a quantum computer! 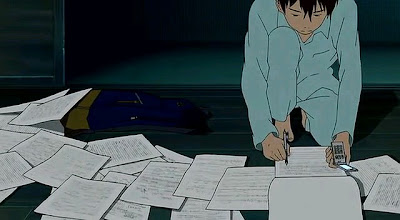 Roger Penrose just came and he does not know why.

But this is acceptable license.  I've got no beef with some bad math that few are likely to identify, and the few who do aren't likely to care about.

After obtaining a bunch of admin passwords to OZ—from many sources; I don't want to ruin one of the better jokes—the AI starts collecting millions of accounts, which permits it to do things like trigger false emergency calls (fair enough), provide incorrect GPS information (surely the downfall of all we've built), control water mains (uhh), space satellites (what), and maybe even nuclear weapons (yeah, whatever).

It is revealed that this beast, named "Love Machine"—ha, that's fun—was an American DoD experiment, deliberately unleashed upon the Internet.  This has no real bearing on the plot, but of course it's America's intentional wrongdoing, silly.  What's an anime without a little completely pointless anti-Americanism?  One day I want to write a screenplay that demonizes the JSDF for no fucking reason. 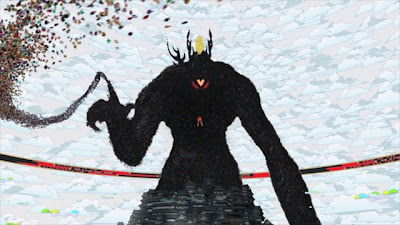 But this is par for the anime course.  I've got no beef with some bad geopolitics and ignorance bordering on chauvinism.

What I do got beef with is that, following the reveal of his culpability and some hijinks that could as easily have been cut, Kenji is practically not in his own movie, and the task of repairing the Internet falls mainly upon a professional gamer superstar and the ex-expat creator of the Love Machine AI, who just happen to be Sakae's relatives and hence present at her castle.  Sure, why not, that's not completely preposterous.  Also not preposterous: the pro gamer trying and almost succeeding in derezing the AI with his shoryuken.

And while we're on the subject, Natsuki's swallowed up by the ensemble after the opening forty-five minutes, too.  What is it with movies I've been watching lately and sidelined protagonists?

Also beefy: my annoyance with Summer Wars' faint but detectable sexist streak.  All but one of the men of the family sort of understand the stakes, while, Sakae and Natsuki excepted, all of the women are, for a lot longer than you'd like, more concerned about making food, getting party decorations, and just being sort of obliviously dumb.  The most annoying one was really into baseball.  I was kind of hoping that that satellite would land on her.

Final beef: lame ending.  This AI is pretty stupid, and the final showdown is hard cheese at best, boring at worst. 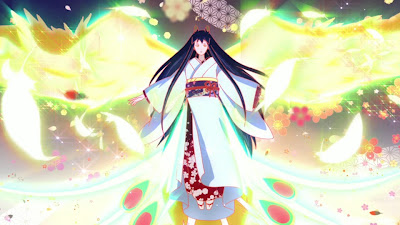 Summoning an Aeon, maybe?  I have no idea.


On the other hand, it may only be the case that Summer Wars' initially stunning representation of the Internet grows pretty stale by the end.  In the early scenes of OZ it's an outstanding example of film as ornamentation, my very favorite kind of film, and often quite beautiful.  Unfortunately, OZ is a tastefully-done Christmas tree (or cake) without much variation in its decoration, that occasionally someone throws up on.

With all the license in the world—and they imported some more from Mars to make Summer Wars work—it's still people dicking around with a keyboard and a mouse.  Hosoda's highly stylized fantasy of how websites work is really neat, but boxes flying at you, however well animated, does eventually get old.  And yet in blaring contrast to the increasing sameness of OZ' world is the aesthetic dissonance of all the individualized avatars serving as surrogates for our (far too large) cast of characters.  This does not quite amaze either.

Compare Tron: Legacy, a similarly dumb vision of how computers work that, however, had the advantages of a small cast, being set entirely within a non-networked machine, and a plot involving the rule of an electronic dictator: that film created a perfect aesthetic system, constantly changing the environment in subtle ways while nonetheless maintaining harsh discipline with its iconography, but Summer Wars is content to bless this mess that is the Internet.  Maybe the anarchic foreground set against drying paint is the point, but I'll argue it misses the greater categorical imperative in this kind of cinema to be both gorgeous and stimulating from start to finish.  And some may argue that it accomplishes both—to each their own.  Either way, I'm gonna go watch a double bill of Flash Gordon and Speed Racer.

I wonder a little if my expectations for Summer Wars colored my appreciation of what is basically a light trifle about family and national togetherness bound together by cool if repetitive images.  I'd reckoned, from the trailer, the critical scuttlebutt, and, well, the beginning of the movie that they'd go one of two ways: either, one, it would be a quiet, bittersweet movie about Kenji and Natsuki's crypto-romance blossoming amidst family drama on one side and the end of the freaking world on the other; or, two, it would be a hacker farce wherein Kenji conducted a secret keyboard war against the AI, likely with Natsuki's knowledge and moral support, whilst having to juggle an intrusive horde of her relatives, as things got increasingly bad in the outside world with only the two main characters privy to its hidden cause, with all of the wackiness and young love possibly nonetheless resulting in the end of the freaking world.

I dunno.  I still feel like either one of those options would be vastly superior to the overlong, underfaithful movie about the family hacking together to stay together, because as far as those go, the Jinnouchis ain't no Flynns.

Still, there's something cute about a girl playing cards with Skynet on her phone.

And, maybe this gets done all the time and I just don't know: there is an obligatory scene of Kenji symbolically bleeding from his nose, in the fashion typical and typically annoying of a male anime protagonist when confronted with the merest whiff of female sexuality.  But they literalize it, following it up amusingly by having Kenji's nostril plugged with toilet paper for, like, a good hour's worth of the movie.  That's pretty funny. 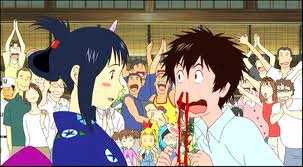 "Oh no, I metaphorically ejaculated!"