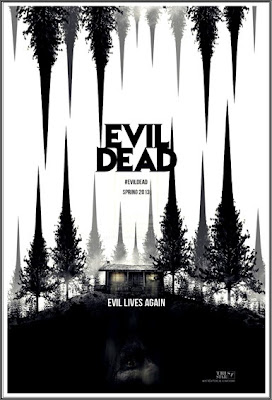 In brief: Mia the heroin addict is taken out to a decrepit cabin in the woods by her brother, her brother’s girlfriend Natalie, and the siblings' old friends Olivia, a nurse, and Eric, a surprisingly useful liberal artist, for a dose of good old-fashioned false imprisonment.

In relatively short order, though honestly not quite short enough, Evil Dead happens: a book made of skin is found, is foolishly read aloud, and a demonic spirit is invoked to take possession of the living until it turns them dead, with Mia taking pole position in the race to eternal torment. Mortification of the flesh ensues, and you know what? 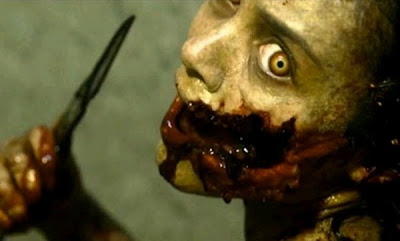 It's marred only by that half-assed attempt at story, which either turns a key member of the cast into a bad actor, or fails on account of a key member of the cast being a bad actor, or a little bit of both.  The tough rehab love is okay enough, and provides a half-plausible reason why anyone would stay one minute in a cabin that's hellish before the appearance of Deadite numero uno; but there is a exposited-out backstory involving Mia and David and abandonment issues that feels like puppet strings on the characters whenever it's brought up, and as far as puppet shows go, I've seen better.  He's her brother: that's motivation for his later actions enough.  If this dysfunction were necessary, then it needed to be taken all the way.  To call it soap opera-level would be to belittle good soap opera. 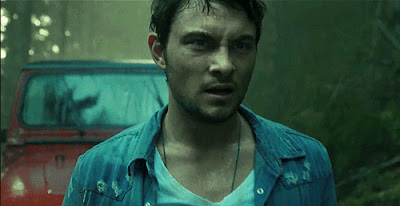 He ain't no Michael Zaslow.

Even so, there is a moment where it could have been pulled off with just a sentence of dialogue.  Soon after Mia is Deadized, she boils off half her face with superheated water in the shower.  The fully trained and licensed addiction professionals on hand believe this to be a natural part of the recovery process, which, they discover in the meantime, also involves beating David's dog to death with a hammer off camera.  For a few shots, Shiloh Fernandez is playing an actual human being, enraged by his sister's crime, distraught over her self-mutilation, desperate to return her to civilization and less inept medical help.  Unfortunately, inner conflict zooms away like a Sam Raimi shot, and while he attempts to get Mia back to the city he does not say what he needed to say to be a real boy, precisely, "You fucking bitch, I hope you do die."  Instead, he blandly whimpers "This is insane."  Diablo Cody reportedly helped punch up this script.  Anyway, he'll repeat this later, along with his other catchphrase, "Everything will be fine."  No arc; just lines with this guy.

It's a good thing he's not really our main character.  Not even in the top two!

Lou Taylor Pucci is one of the two standouts, as the liberal artist who reads from the book bound with human leather that could be titled Candarian Demons For Dummies and be less obvious, and gets everybody into this mess.  He is also, by far, the most/only competent person working to try to clean that mess up.  Pucci's Eric gets the lion's share of the punchlines to David's emptyheaded set-ups, and is savvy and just plain observant enough to very quickly put together that this is not, as David suggests, "a virus."

And did you know that a history degree grants its bearer a form of hilarious near-invulnerability?  I guess our secret's out.  If you've seen the movie, it'll be pretty clear to you that he was just resting his eyes and David killed him. 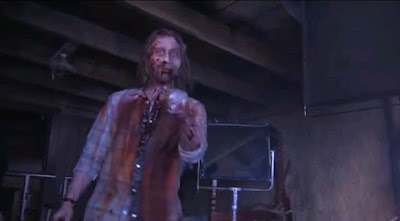 And then there's Jane Levy.  Wow.

Levy is excellent—as, at least I think, the actual protagonist. I sound uncertain because the movie doesn't seem certain either. Mia is clearly the focus of the early character-building scenes; but as noted she is also the first to be possessed; hence for a long while she's the villain. 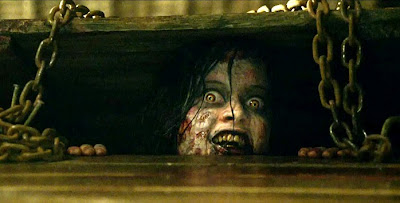 And what a villain.

Levy is decent as pre-possession Mia, but is revelatory as a demon, portraying, with a shivering intensity, a creature of sick appetites and profound evil.  And she gets the best line of the movie as a Deadite.  When David attempts to reason with her, the devil inside, malevolently flummoxed that he'd even try, exclaims, "Mia's not here, you fucking idiot!" 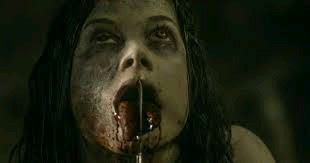 "Relax, guys," sez David.  "I saw this in Trainspotting."

Even after two viewings, I can't quite decide whether Mia's lengthy possession is a problem or not. On one severed hand, the course of events that ensues takes her out of what is apparently her own story; on the other, some of the more bravura scenes of hard-R violence and squick are in this part. Ultimately, I think it looks wonderful even if structurally it feels a bit wrong. The Evil Dead series (even Army of Darkness; maybe especially Army of Darkness) has traditionally had its focus on one delightfully cartoonish superhuman—an attempt to focus on these sketches of characters, especially when one was David, was something of a misstep on this film's part.

I'm also annoyed that Mia, unlike Ash, doesn't rescue herself or, as in the opening of Evil Dead 2, at least escape by chance.  This is besides the fact that her medically retarded return to humanity clips a lot of suspension wires for our disbelief, in a movie that's already featured a nail gun getting shot across a room with full magnum force.  The real problem is that it keeps Levy in languish, in favor of continuing to force-feed us this weak sibling-reconciliation plot.  I mean... at least take the Goddamned bag off her head, David.

Yet, despite such bad medicine as to make Jon Bon Jovi weep, she does return.  And if the big callback to Evil Dead 2 is maybe a little much, fuck it, when Levy goes to war, it looks great.  Evil Dead 2013 leans into excellence here, with a phantasmogoric ending every bit as iconic as anything in the OT.  It's no secret how much I love bright colors; and red is my favorite.  I confess to being a bit confused by the final horror, but on rewatch it finally clicked who and what it was.

"Feast on this, Peter Gabriel!"

And in the final moments, it chooses to go with the empty bleakness that The Evil Dead teased, instead of its wacky crash zoom reveal.  Mia limps traumatized toward the sunrise that Joe Kosinski needed for Tron: Legacy to prove how beautiful it really is.  But I have no doubt Mia will be back, and I'll be very happy to see her again, and surely we'll see Jane Levy, hopefully in equally high-strung roles, in the meantime.

I may be a bit harsh on some of the players, but everyone was game here.  As an extravaganza of in-camera effects, this was a terrible film to shoot, with hours in makeup and hours more on set covered in mud and fake blood and their own body soil, and even fake piss (maybe drink a glass of water sometime, Olivia), and I wouldn't blame anybody for actually wetting themselves a little bit here.  They all deserve a medal just for remembering their marks and most of their lines.

And Fede Alvarez should win a medal too, a medal in doing good remakes; and statues should get built for the amazing special effects team led by Jason Durey and for the whole makeup department, particularly Patrick Baxter, for his gruesome prosthetic work.  If in a different vein from the original, with almost more Cronenberg influence than Raimi, it's still got that ridiculously over-the-top nature to the violence it needed.

Indeed, I've been a bit heavy on plot spoilers, but what I don't want to excessively spoil are the nasty details of the thrills and spills of Evil Dead, into which everyone involved clearly put all their hearts and filthy souls.  From the moment Mia gets evil and dead, this is one of the grandest of guignols you're likely to see.

It may be more like An Evil Dead.  It may trade the unrealistic, now-dated and unfortunately-unlikely-to-ever-be-seen-again charm of The Evil Dead's effects for the modernist's true gristle.  For this and for the divine spark of inspiration a remake will almost always lack, it cannot replace its forebear.  But for the quantity and quality of the delicious gore on buffet here, it nevertheless exceeds the iconic original.

Blu Ray stuff: available as of June 15 2013.  Extras include a lot of self-congratulatory featurettes, of some interest.  A bit but not enough of the meaty FX and makeup behind-the-scenes you'd want.  Has a commentary with Alvarez and Levy and some other people that I didn't listen to, because I just watched The Evil Dead and watching this twice seemed, I dunno, a little excessive.

Premise 1: freeing someone from demon possession, even if it results in their physical destruction, keeps the demon from claiming their soul, and prevents the rebirth of the Abomination, who needs five souls.  Evidence: Mia suffocating beneath the ground did not entail that rebirth, even though her death makes five.
Premise 2: purification by fire is an acceptable, even go-to, method of exorcising the demon. Evidence: the prologue.
Conclusion: David burning himself and Eric to death in the house shouldn't have counted toward the five and the Abomination should never have arisen.